The Virtues of the Leica M3 – by Steven Bleistein While the Leica M3 has a storied mythos associated with it, people tend to look at it more critically in comparison to other models when resolving to buy their first, and perhaps only, Leica M body. Buyers become discerning when it comes to parting with their own cash, and often eschew the M3 in favor of another model like the M6, M2, or M4, even when the alternative costs more.

I don’t fault people for having their own preferences. Every Leica M is wonderful in its own way. However, sometimes I believe people give the Leica M3 short shrift only later to regret it.

I make no apologies for that. My bias toward the M3 is based on experience, not pretense. I tend to compare every Leica M against the Leica M3. Just after it came out, I tried the Leica M-A at the Leica flagship store in Ginza, Tokyo, hoping to be impressed by Leica’s latest homage to the M3. While a superlative camera, The M-A just did not have the same feel as the M3. The M3 feels like it has more heft. The M-A shutter release sounded and “felt” clunky by comparison to the M3. The M-A finder showed no improvements. I asked the sales person why Leica can’t produce a camera today to the same specs as the M3.

So why do people forgo a camera despite such exacting build quality standards that can often be had for $800-$1000 plus a few hundred dollars for an overhaul? There is a pattern to the reasons I hear. I question their validity below in no particular order.

Is spool loading a bit fiddly? Yes. But frankly, the so-called “rapid loader” of other Leica M models is fiddly as well, just fiddly in a different way. Let’s face it. Neither film loading system is anywhere nearly as friendly as say that of a Nikon S2 or FE. Yet I can tell you from experience, owning and using Leica M cameras with both systems, that you become adept at both to the point where you no longer even think about it. Film loading does not matter. My first experience with rewind knob was that of the M2, which is the same as the M3 as well as the MP, the M-A, and some M6 models. Winding was traumatic. It seemed to take forever to get to the end of the roll, and I did not know you could suffer muscle bonk in your fingers!

However, like the spool film loading system, you get adept at rewinding over time to the point to which you never even think about it. The slanted crank winders are a bit faster to be sure, but we are talking about seconds here. Also, I always feel a bit nervous using the crank on my M6 and M7. It seems so delicate, and I worry that with my ham fists I might accidentally break it. Yes, the M3’s finder goes no wider than 50mm. 50mm was the standard of the day. Here’s the thing though. When you shoot frequently using a 50mm frame, you get comfortable seeing the world and composing in 50mm. 50mm for a while became my focal length of choice. When I shot with a 35mm lens after shooting 50 for so long, the 35 seemed hopelessly wide. However, after persistent shooting, I got used to it too. I now feel comfortable shooting with any prime lens.

If you want to shoot 35 with a Leica M3 without having to resort to an external finder, you need to get one of the old 35mm lenses with mounted optics, or “goggles,” to convert the 50mm frame. There a few models of these that you can buy used, including the an f/2 Summicron, an f/1.4 Summilux, and both f/2.8 and f/3.5 Summaron lenses. All are excellent lenses, even by today’s standards. 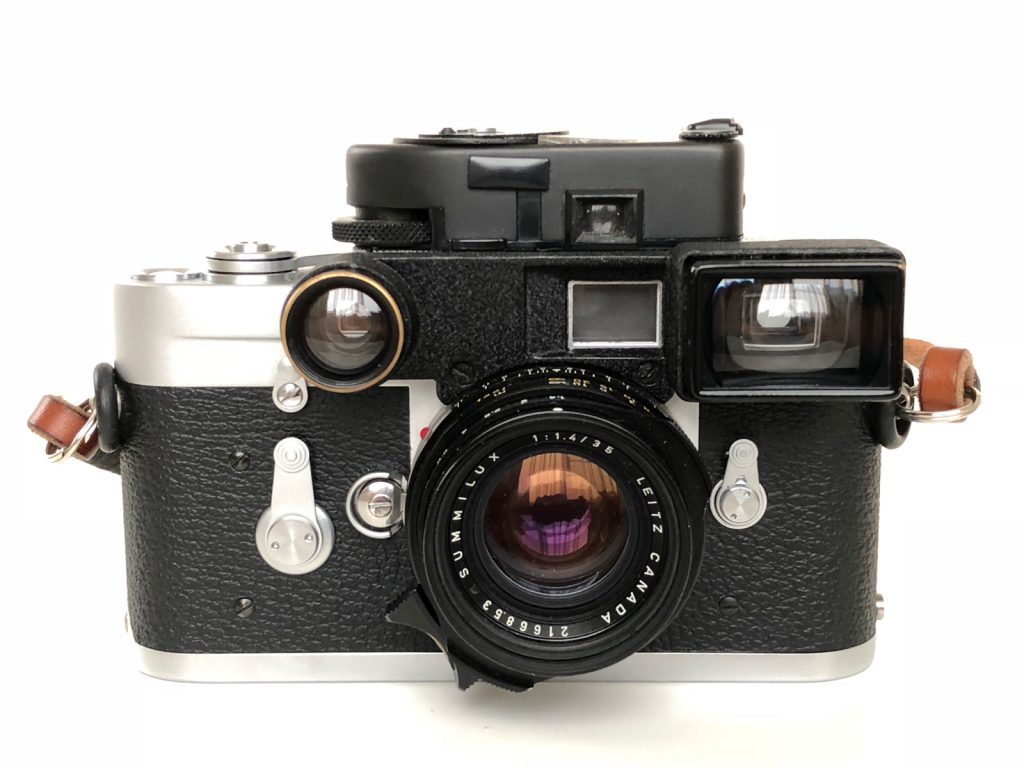 People complain about the goggles – that they add weight to the lens, and also that they create a distortion in the finder. Both Summicron and Summilux lenses with goggles weigh less respectively that their contemporary Leica progeny. The goggles do cause some finder distortion. However, I put up with it. I wear glasses. So even if I use a Leica with a 35mm frame, whether .72x or .85x, I cannot see the whole frame at the same time. In fact, I can fully view nothing wider than than a 50mm frame. So when I shoot with my Leica M6J, M7, or even my M240, all of which have 35mm frames, I use a made-for-the-M3 35mm with goggles. All the 35mm lenses with optics choose the 50mm frame on all Leica M models, and they work fine! The only exception might be the Leica M10, as added thickness of the lens mount bezel moves the mounted optics further away from the view finder windows, which I say based on a cursory test in a Leica shop.

I find that the Leica M3 finder gives me the best viewing experience of any Leica M, whether using a 35mm lens or not. The M3 finder is not prone to any of the flaring issues on the M2, M4, M6, and early M7s. I’m not sure about the M5, but I suspect it has the same issue with flaring. The M3 finder patch is larger and easier to see than on any other Leica model, making accurate focusing easier when shooting wide open. I have shot the f/0.95 Noctilux on my M3 with no problem nailing the focus. The M3 finder magnification is .91x, greater than any other Leica M. The .85x that you can get on some other Leica M models is a close second, but still does not compare.

Incidentally, the first Leica M body I bought was an M2, but I returned it a week later and bought an M3, even though the M3 cost more, just because the M3’s finder was so much better. “I worry about the reliability of a camera that is over fifty-years-old!”

Build quality matters more than age. The M3s have extraordinary build quality that is unmatched by any subsequent M model. The M3s are eminently serviceable because of that quality, despite age.

Leica increasingly compromised build quality on every model after the M3 in a effort to cut cost, and it is apparent. Leica M6 top plates are prone to a bizarre bubbling over time. The M6 exposure counter stops functioning properly because of a plastic gear that wears out. I know this because the one on my M6J has. It is amazing how a part that costs less than one cent can end up requiring a repair service that costs hundreds of dollars to fix. I have also heard from people around Tokyo who repair Leicas that the electronic shutter speeds of the early M7s are beginning to fail, and those cameras are less than twenty years old! Despite build quality problems, both used M6s and M7s sell for much more than an M3, even an M3 in superb condition.

Count on having to have any M3 you buy overhauled. If you are not an expert on camera quality, I recommend you buy from somewhere reputable. I had Kanto Camera in Japan procure and overhaul my second M3 after a frustrating experience of buying and then returning ostensibly “overhauled” M3s at shops in Ginza. It cost a bit more to have a pro procure an M3 than buying off of eBay or from some random used shop, but it was worth it. Kanto’s  QC is exacting and they warrantied the camera for me. I recommend Kanto Camera in Japan, and they do sell internationally. If you are worried about communication, I recommend buying from Bellamy Hunt of Japan Camera Hunter.

There are reputable people and shops all over the world. Ask around, and find one convenient for you. It costs more, but I have found that when you buy an M3 without knowing what you are doing, you end up paying more after discovering later that it needs service and repair. And then there is the aggravation of having to send your camera out for repair. “I don’t like not having a through-the-lens light meter!”

Lacking a TTL light meter is less of a big deal than you might imagine. I attach a Leicameter MR-4 or MC to my M3, and it works brilliantly. I even shoot slide film with the M3 measuring only with a Leicameter, and always get the exposure right.

For street photography, there is something to be said for being able to measure the light without having to raise the camera to your eye. In any case, you don’t really need a light meter at all if you are shooting monochrome or color negative film. I often just remove the Leicameter. Don’t get me wrong. I am not writing this piece to spark a pointless debate about which M is the best camera. Who cares? To each his own. Instead, I want to provide a perspective so people can make a better decision for themselves, whatever that decision might be.

So reject the M3 if you must, but do so with eyes wide open. For those who would like to own a $27,000 camera, go buy an M3 for $800-$1000 and get it overhauled. Get one while you can. They are not making them anymore, and there will never be anything quite like the M3 again. A brief relationship with a Leica M [typ 240]