Until a few weeks ago I hadn’t held a Barnack Leica for a good few years, so long in fact that whilst I knew the name “Leica” when I did hold one, I had no real concept of what I was looking at. In the maybe 15 years since then I have picked up quite a few different cameras of all shapes and sizes, makes and models. I have cameras in my collection from the late 19th century all the way through to modern digital point and shoot cameras. They range in size from pocketable up to large format. And although I only own an M7 now, I have also owned an M6 and M4-P. I suppose what I am trying to say is that in this period of time I have experienced quite a few cameras, including a few Leica’s yet when I got my hands on an early “Barnack” Leica, a 1936 iiia to be more specific, I was still a little surprised at how lovely it was, and moreover, how small! But more on that in a moment… 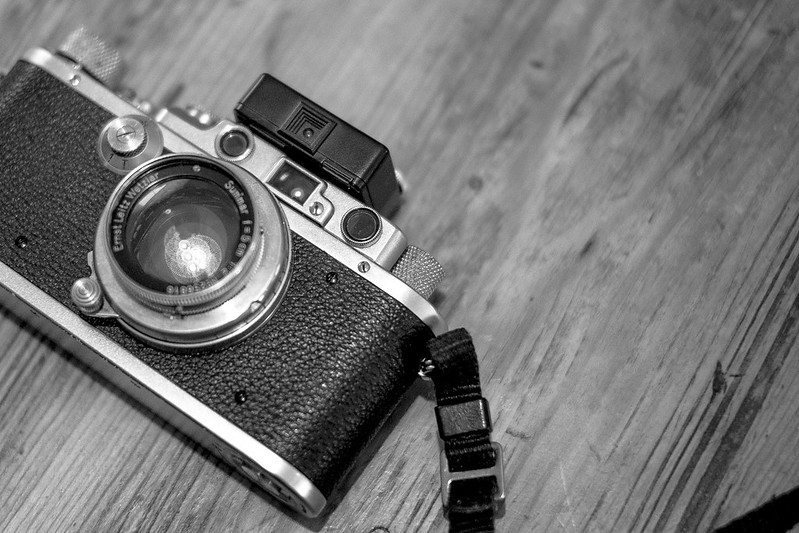 For the uninitiated, a “Barnack” Leica is a general term for the older style pre m-mount Leica cameras. These older cameras were initially fixed lens cameras but were soon equipped with a 39mm screw mount. They are known as Barnacks after the chap who designed them, a man named Oskar Barnack. I don’t claim to know a great deal on the specifics or the history of the events that surround Barnack’s designs, inventions and motivations, and the more I read online the less I feel I know for certain. A few nuggets of information do keep cropping up though. (And do bare in mind this is my interpretation of what I have read, if you want to know more, do some reading :)) The first is that Barnack had been working to create a small camera to run short runs of movie film for the growing movie industry. These cameras were for the purpose of testing exposure for shoots. He was also interested in stills photography but through ill health was unable to carry the heavy larger format cameras of the day out in the field. It seems his experience with 35mm movie film cameras, combined with this desire to shoot and carry a camera wherever the wished without the usual weight, were at least some of the main components in the path toward his stills camera designs. He took the 18×24 fame size of movie film and doubled it to 24x36mm. This gave a negative, that combined with the quality lenses of his employer, Leitz, gave a good enough quality basis for enlargement to a final print size. His early designs proved very popular, and as such the Leica (leitz camera) was born. Kodak soon introduced a the 135 format film and the popularity of the format and the idea of enlarging a photo from a small negative started to grow fairly quickly.

It’s safe to say that Barnack paid an undoubtedly large part in the popularisation of 35mm film and the use of the 24x36mm format. He was responsible for the birth of the 35mm stills camera and in many people’s eyes is therefore the “father of 35mm photography”. Which considering the popularity of 35mm eventually outstretched all other formats by a margin, is quite the achievement!

I was, and have been very intrigued to shoot with a Barnack Leica for quite some time. The age of the things and potential for failure concerned me a little so I’ve never quite taken the plunge. I have had the M7 for a while, so the old Leica GAS has been well under control! Then I get an email from a local chap asking how I get such good quality scans and if they are done locally. We get chatting, he’s read a page or two of my blog so knows my interest in compact cameras… Long story short, I had a Ricoh that he wants to have a go with, and he has this Leica iiia.

So me and this chap meet up to exchange cameras, only on a loan basis, but there is talk of a more permanent deal should we be a fan of each other’s cameras. Bearing in mind that, as I say, this is the first time I’ve held a Barnack Leica in years, it really was love at first site. The iiia is a fairly early Barnack, it has a screw mounted lens, speeds down to 1sec and it was the first with the higher speeds up to 1/1000th (the standard shutter speed range for Leica’s from then on). Unlike the later models it’s rangefinder and viewfinder are well separated on the back (later models had them next to each other, and eventually, in the iiig they are in the same window (This is incorrect, see comments below)). It also doesn’t have flash sync or a self timer. It’s basically a very simple camera, but beautiful in its simplicity to my mind. I am told it’s slightly, but not much smaller than a the later models too, which brings me to my earlier comment about how small it is. 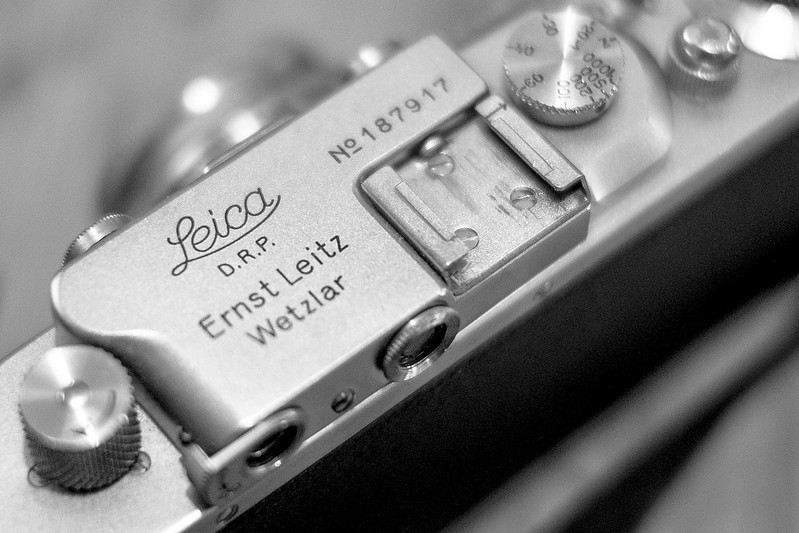 Obviously I have read about Barnack’s motivations to make a small camera, but without the perspective of this knowledge and having one in my hand it didn’t really sink in. I’ve had older rangefinders too, but none that feel so complete, or are so small. This iiia really is a tiny camera and whilst there are smaller cameras that do more things from more recent years, there are few that I have experienced that feel so much like a finished article. Few that don’t make you wish for this feature or that improvement.

I have a thing for products that feel like “perfect design”, what I mean by this is a product that feels like you couldn’t take anything away or add anything else to achieve anything necessarily better. To give an example, the zippo lighter is another perfect design. Yes modern electrical windproof lighters with a torch on one end and a key ring bottle opener on the other are very useful, but they don’t capture this simplicity of design in the same way. There is an undeniable sense of perfection in the simplicity of the design of Zippo lighters, and I think this early Leica captures that same sense of perfection in a more than pleasing way! It’s not to say that both items don’t have their flaws, fill a zippo with to much fuel and spill a bit on the case and risk setting your hand on fire. Likewise, I’ve not experienced a Leica rangefinder, Barnack or otherwise, that could be considered easy to load with film. But these foibles somehow don’t detract from the satisfaction of the item when held and used for their primary function.

So many cameras were to come after Barnack’s inventions, but it could be argued that a good deal of them didn’t provide “improvements” as such upon the concept! Additional features can merely be seen as extras to aid the uninitiated, attempt to speed up the process of taking photos or allow the camera to be used within more fields of photography. An SLR for example makes for more accurate framing and allows the use of a wide range of lenses without much fuss; but this is at the cost of physical size. Autofocus does arguably increase the potential for faster shooting, but it’s not infallible. A built in light meter and auto exposure probably tick the most boxes for me personally in terms of “improvements” to the concept, but they aren’t a requirement for a camera to function. The list of course could go on for days. The point I am trying to make is that whilst the Barnack Leica’s aren’t necessarily the right choice for every field of photography, for what they are intended, in the right hands, nothing more is actually required. 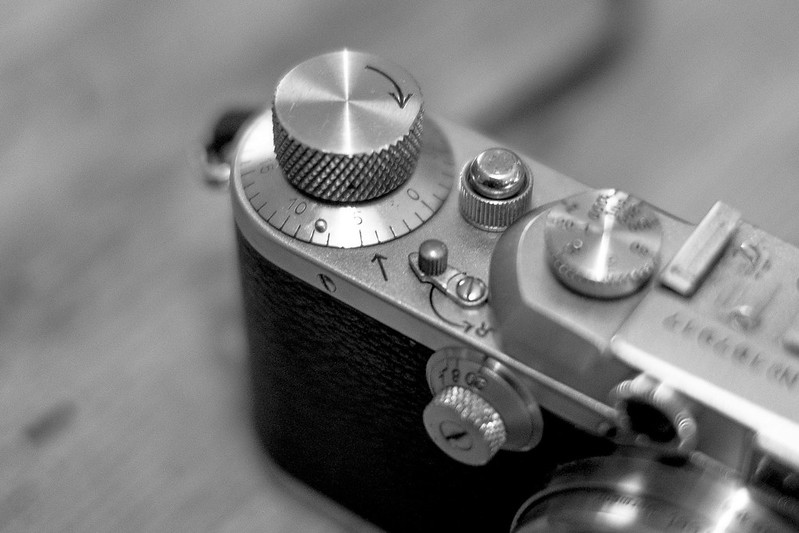 As such, I think Barnack basically nailed the 35mm camera first go (or at least first goes), he set the bar for everything that followed and the fact that even to this day his cameras are so highly prised and actually make a very valid choice for many people’s needs speaks volumes!

Back to the size for a moment, as this was the thing that really struck me when I held the iiia for the first time. Barnack didn’t just tackle the problem of size and weight of camera he solved it so profoundly well that not only should be hailed as being responsible for the birth for the 35mm camera, but also specifically for the birth of the 35mm compact camera! The iiia isn’t really that much bigger than a Ricoh GR1…

Until now, due to my specifying that this blog was only the home of compact cameras with a fixed lens, interchangeable lens rangefinders haven’t really had a place here! In hindsight, given the above, and recent realisations on my part, you can probably imagine I feel almost a little silly! For a blog about 35mm compact cameras to not allow their forefathers; cameras created for the very purpose of being small not to be featured on this site is just ridiculous. So yeah, in summary, I’m opening up the niche of this site to include interchangeable lens rangefinders … how can I possibly not?

At least now my incessant rambling on here about my M7 will now be justified! 🙂