The Agfa 1035 and a Confusion of my Preferences The Agfa 1035 is a wonderful piece of German Functionalist industrial design. It is a camera that consists of little more than what’s absolutely essential for its purpose. For this, I love it, but I’m rarely drawn to use it. So rather than simply review it, I thought I’d detail why I’ve found myself to have such a mixed response to it, and how it made me reflect on my preferences.

To my eye and for my tastes, the Agfa 1035 is almost the perfect looking camera. I have a bit of a penchant for functionalist industrial design – I’m not hugely knowledgable about the history of it all – but the theory of function over form, or at least form derived from function interests me. I like the cameras I use to be simple, to be self explanatory, and for their design to compliment their simple function rather than obstruct it.

I like to think there is a bit of theme within the content I write for this website that regularly picks up on these camera design ideals – if you’ve not read my post about the lure of the uncomplicated camera, then that’s a good place to start. That said, since I’m no expert on the history of industrial design, I rarely discuss who designed what camera, when and why within the reviews I write. Instead, I write about my response to them, and how they do or don’t work for me.

In the hundreds of posts I’ve written about cameras and lenses on this website I’ve only mentioned the names of a handful of industrial designers. In fact, the Agfa 1035’s designers feature in the only post I’ve ever written specifically about the design history of a camera. If you were looking at this Agfa thinking how much it looks like the Makina 67 you’d be right, it does. Both cameras, to my eye, are very attractively designed. There’s little in the way of flourish, and both have quite obviously been designed to work in a straightforward and obvious way. And moreover, as I say, they look pretty damned similar. 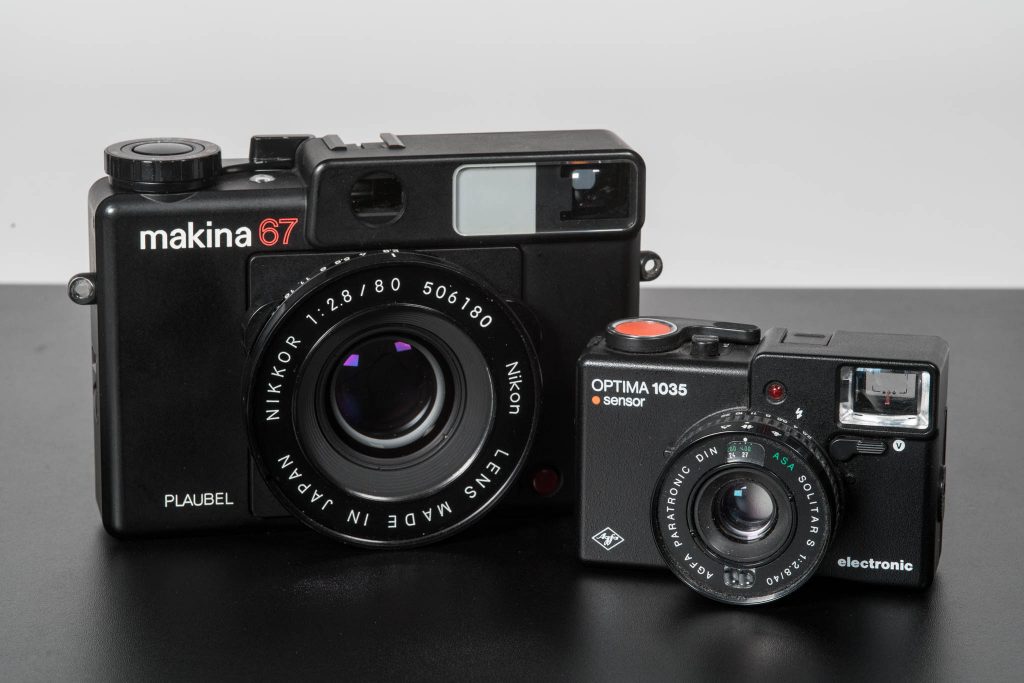 So intrigued by the similarity I was, I ended up talking via email to a man called Julian Schlagheck, the son of Norbert Schlagheck, who was half of the partnership Schlagheck & Schultes. Schlagheck & Schultes were the company responsible for the design of the Agfa 1035, a design that apparently appealed so much to a colleague of there’s – a Mr, Udo M. Geissler – that he copied it when he designed the Plaubel Makina 67. You can read that full story here.

Since writing that post, I’ve also reviewed the Plaubel Makina 67. What’s relevant about that review in relation to what I have to say about the Agfa – aside from their similar appearance – is that despite a whole load of flaws I found in using the Makina 67, I still found it to suit me. It’s bigger and heavier than I like cameras to be, but for what it is, it does at least compact down enough to be carried easily. I don’t really get on with the soft-edged rangefinder patch, but I make it work because of the limited availability of a viable alternative. I have a few other concerns about it too, but in short, as far as medium format cameras go, of all that have ever been designed, it’s just the one that seems to suit me the best.

And therein lies the fatal flaw in the design of the Agfa 1035. Like any other film camera, unfortunately for it, these days it’s not just the cameras that were contemporary to it that it’s in competition with. There’s a hell of a lot of 35mm compact film cameras with similar features over the span of a few decades. The Agfa 1035 therefore has a lot of alternatives, and unfortunately, as good as it is, when compared to other cameras that do a similar job, it just doesn’t stack up for me. But, before I explain why, let me just tell you about how brilliantly designed it is.

As I’ve alluded to, the Agfa 1035 is a wonderfully simple camera that ticks so many boxes for me in terms of the way it functions.

The viewfinder is huge. Not only is it huge, but it’s also bright, and it tells you the distance the lens is set to along the lower edge of the view through the finder. 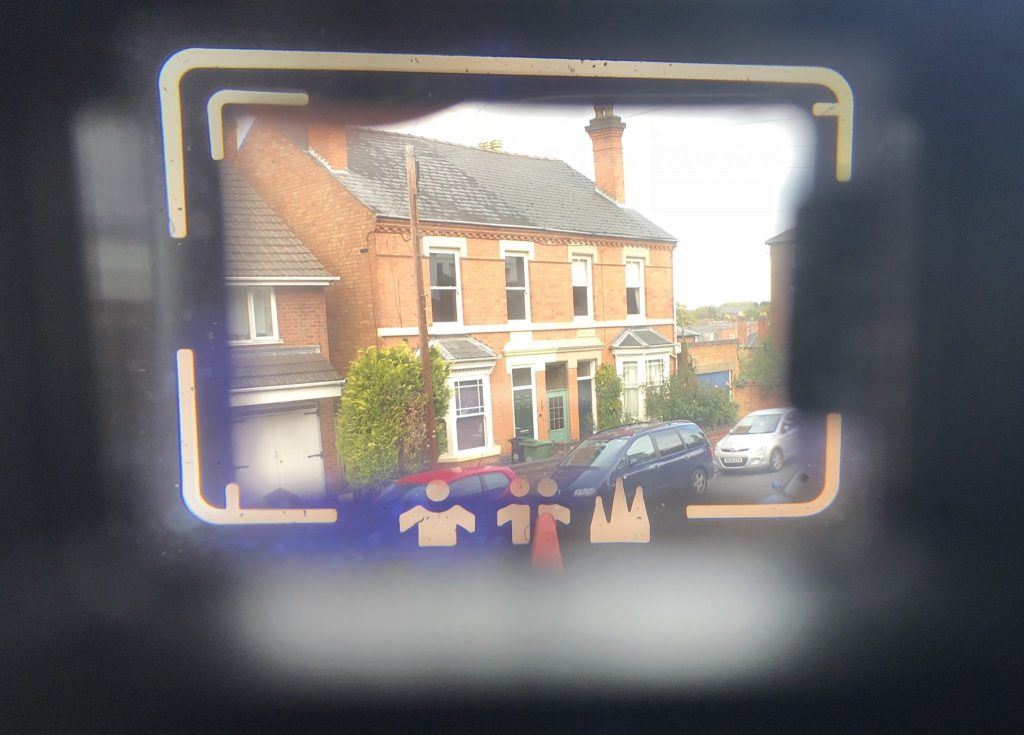 Scale focusing is achieved via a lightly clicked dial around the lens. The lens is mounted in a wide barrel, and so focusing feels quite natural and easy. There are three symbols that are displayed in the viewfinder (as above). But if you want to be precise, turn the camera upside-down and you’ll see distance marks on the bottom of the lens. 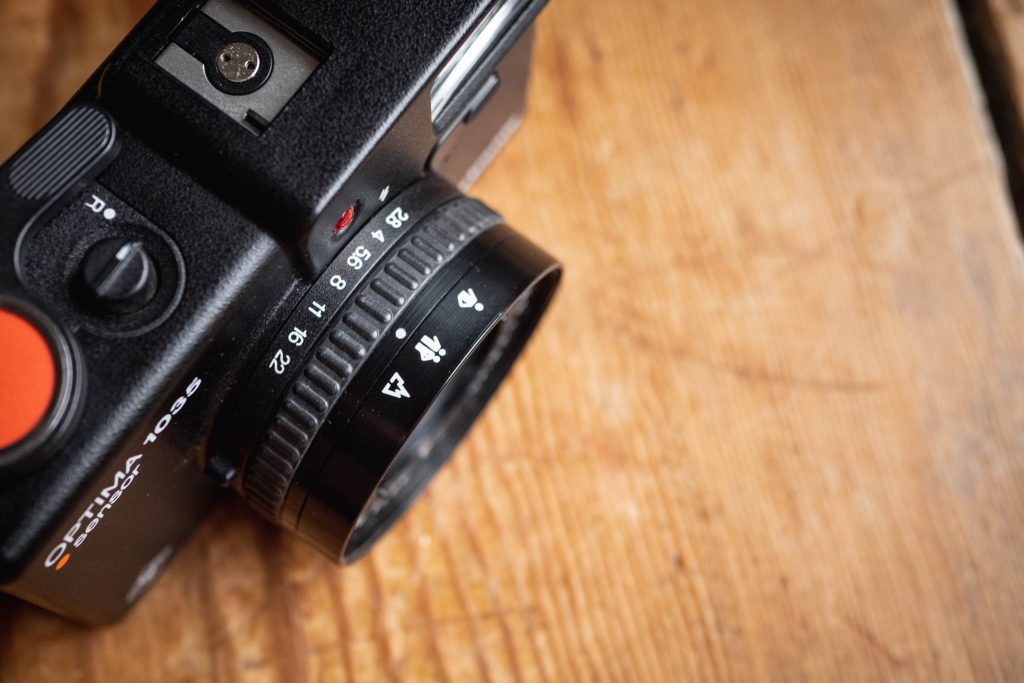 The big red shutter button on top of the camera falls right under your finger. It manages to give good feedback, but at the same time requires little pressure to fire it which helps keep the camera steady when shooting. Possibly my favourite feature, the film advance doubles up as a rewind lever. Press and rotate the button next to it and it effectively reverses its function. This helps keep the design neat as there’s no need for a secondary lever. Push the switch on the side of the camera and the back pops open. To make loading film easier the bottom right of the camera is hinged and pops down. This allows the film to be located easier then locked in by pushing the bottom up into the film canister. The film leader is the pushed into a slot, the back closed, and your ready to go. One small negative is also visible here – to change the batteries, you have to open the back

Exposure index is manually set via a small dial around the front of the lens. It’s very easy to adjust, but impossible to knock. The Agfa 1035 doesn’t have a built in flash, but mounting a flash to the camera activated the aperture control around the lens for working with a manual flash.

The lens is pretty good too… 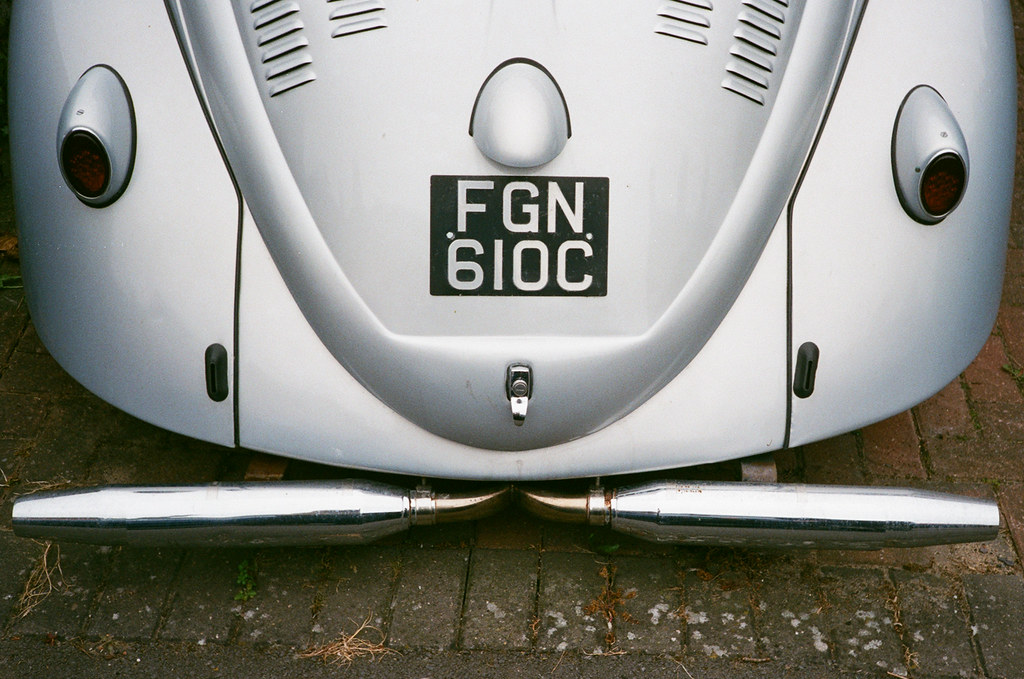 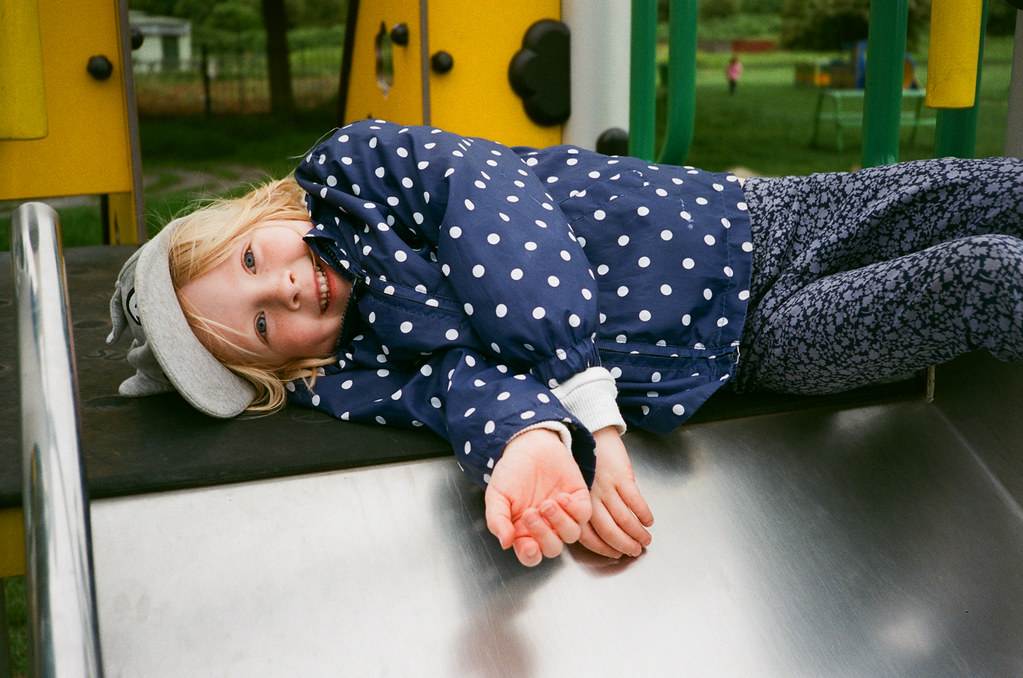 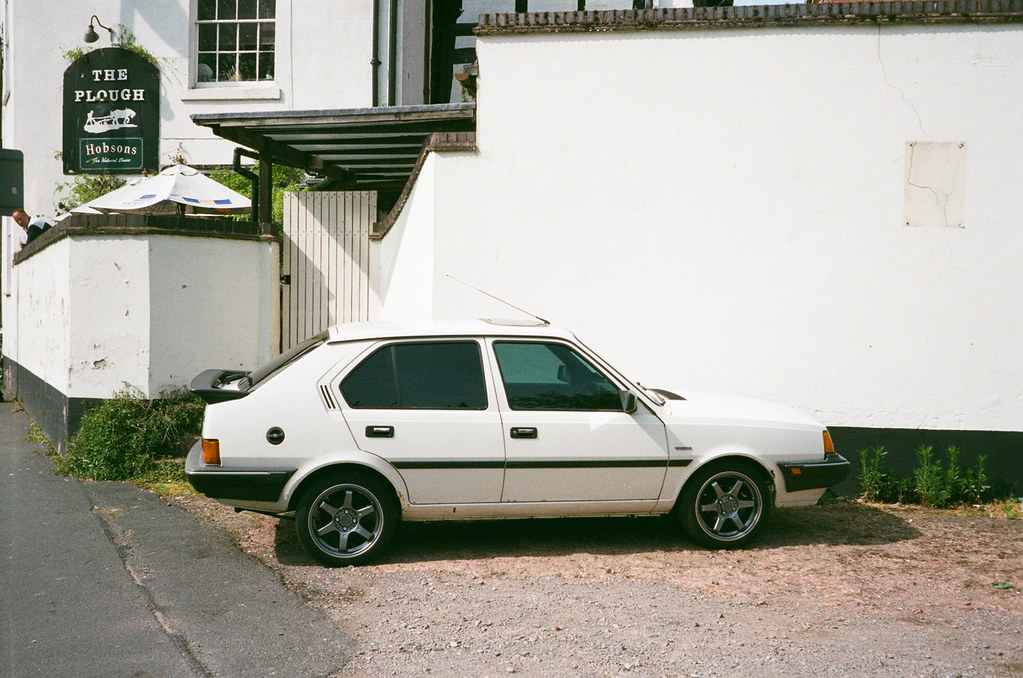 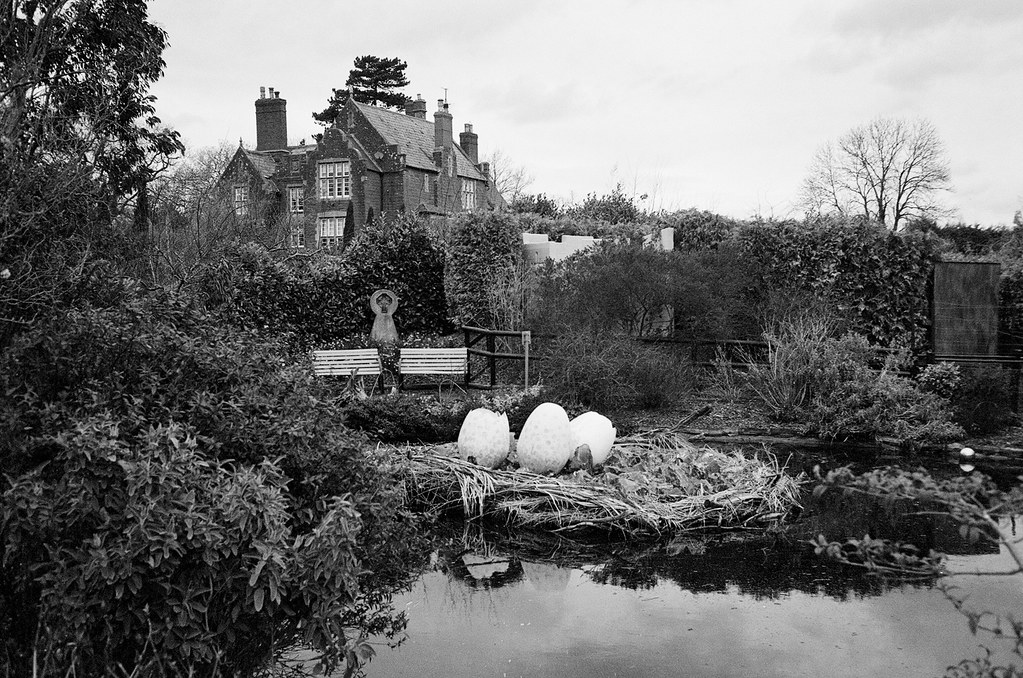 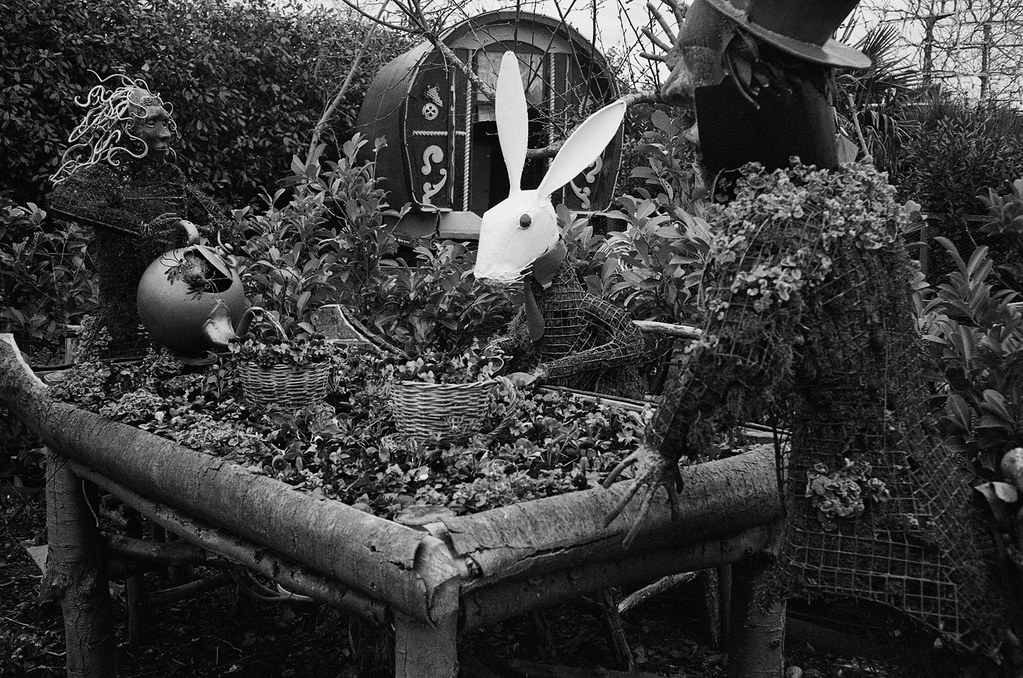 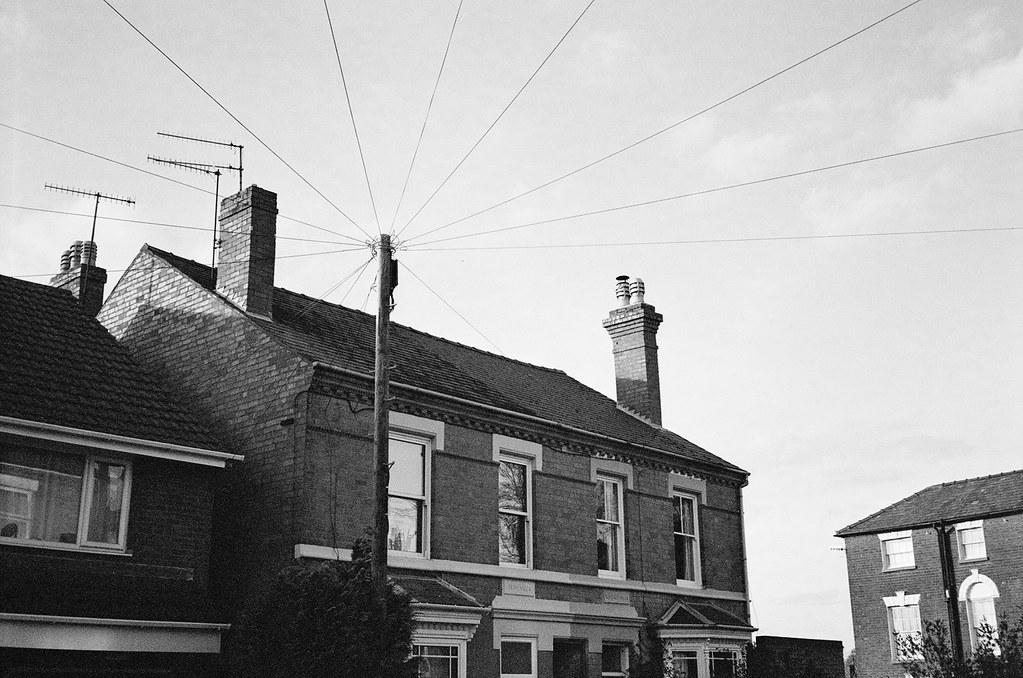 The reason it doesn’t work for me

There’s lots of neat design solutions here, many of which appeal to me greatly. But despite everything that’s great about this camera, it’s just too big. This might sound like a crazy thing to say about what is obviously a small camera, but compare it to another design classic with a similar usage case, the Rollei 35se, it’s quite un-pocketable. I’m not opposed to using cameras that don’t fit in my pocket, but if I’m going to shoot one, there needs to be a compelling reason to do so, and despite everything I do really like about the Agfa 1035, none of what it offers makes up for the fact that it’s slightly too portly to fit in my pocket.

To a certain extent, this breaks my own narrative around my preferences for simple cameras. I’d argue that the Rollei 35se is a more complicated and certainly more fussy camera to use, yet I prefer it to the Agfa 1035. The Rollei is a good looking camera too, but what it brings to the table is a size advantage that I can’t ignore. That is to say, despite it being a more complicated camera, I prefer it to a more simple, bigger camera. The Makina 67 on the other hand is massive. It’s looks appeal to me in the way the Agfa 1035’s do, and like the Agfa I also find it to be flawed. Ultimately though the balance of its size and output makes it the right choice for me.

What this all clumsily proves is that shooting purpose can confuse some preferences. I think I prefer simple cameras, but I’ll shoot a slightly more complicated one that better fits in my pocket. So I like small cameras then? Well yes, smaller size is part of the reason I like the Plaubel Makina 67, yet that’s a camera that’s a damn slight bit bigger than the camera it took its design cues from. Ultimately, I’m happy with the size compromise as I shoot the Makina for its incredible image quality. So then image quality is a factor? Yes, but I prefer the shooting experience of my Lomo LC-A to the Agfa 1035 too… and it’s fair to say the Lomo lens is less good quality. In short, my preferences are quite complicated, and I find merit in lots of different cameras for different shooting purposes and goals. The Agfa 1035 appeals to me in the way it works and the way it looks, to the point that I feels like it complies with my core industrial design ideals. Yet in practice, thanks to it being slightly bigger than cameras that do a very similar job, I’ve not had the desire to shoot it, and didn’t enjoy it nearly as much as I hoped I would when I did.

I’ve gone round the houses a little to explain all this, I admit, but I’ve done so because found the experience of not shooting the Agfa 1035 has made me question and reflect on my ideals. I genuinely really expected to love this camera, but as wonderfully designed as it is, it has proved to me that there’s no perfect design theory – even when that design theory is of particular interest to me.

We are all different, and all have different ideals when it comes to how the things we use work for us. On paper, the Agfa 1035 is ideal for me, it’s simple, and it’s wonderfully designed, but the fact that it’s a bit bigger than the Rollei 35se or my Lomo LC-A (and quite a few others) means that despite me really appreciating the way it looks and the way it works, means I just don’t pick it up.

Ultimately – and I suppose this is the real crux of my rambling point here – camera choice comes down to a complicated mix of preferences and compromises. And even when a camera looks and seems like it might fit a lot of preferences, it only takes one compromise too far for it not to be right for any particular individual. It’s no wonder the forums are so full of arguments… …