Hamish had a frustrating experience with a Nikon L35-AF.  His excellent review spurred me to write a few notes on some simple but sometimes effective things to try if you find yourself with a less-than-‘top-notch’ Pikaichi.  Some of these things might apply to other compact cameras as well. And as with most compacts, if you’re having problems with your shutter or motor the chances are you’ll have to open the camera up for prodding/adjusting/cleaning etc. but do give these simple things a try first…

A stuck or unreliable shutter could be caused by any number of mechanical or electronic problems, especially if there’s any evidence of past moisture damage, but it is worth a quick check of the battery contacts first.  Most of the original L35s are very persnickety about power supply.  Seriously, even a little barely visible corrosion on the battery contacts or any variance in the voltage from cheap or rechargeable batteries that wouldn’t affect most cameras is enough to make it grumpy.   I’ve seen a few dead or semi dead L35s, including a couple of Ebay “spares or repair” bargains come back to life just by scrubbing and scraping the contacts with vinegar and using Duracell AAs. It’s possible that Nikon didn’t fit a proper voltage regulator, maybe they didn’t have the technical experience or opportunity to field test before release. My guess is they knew there was an issue though because the manual has an atypically specific section on battery selection.   Either way later models seem much more forgiving. Rubbing the battery contacts with vinegar

The battery door is a bit flimsy on most plastic-bodied cameras from the 1980s and the L35 is no exception – if your shutter is temperamental even with new and powerful alkaline batteries try pressing on the battery door and retesting – if that makes a difference either shim the batteries with a bit of folded tinfoil or build up the contacts themselves with a few drops of solder . Adding a dot of solder to the battery contact

Don’t leave me this way

L35s are also a very sociable camera, they hate dark cupboards.  More than Canons, Olys or Ricoh’s of the same vintage I think. This might be because they use more metal components than most and so are more prone to seizure after years of inactivity. 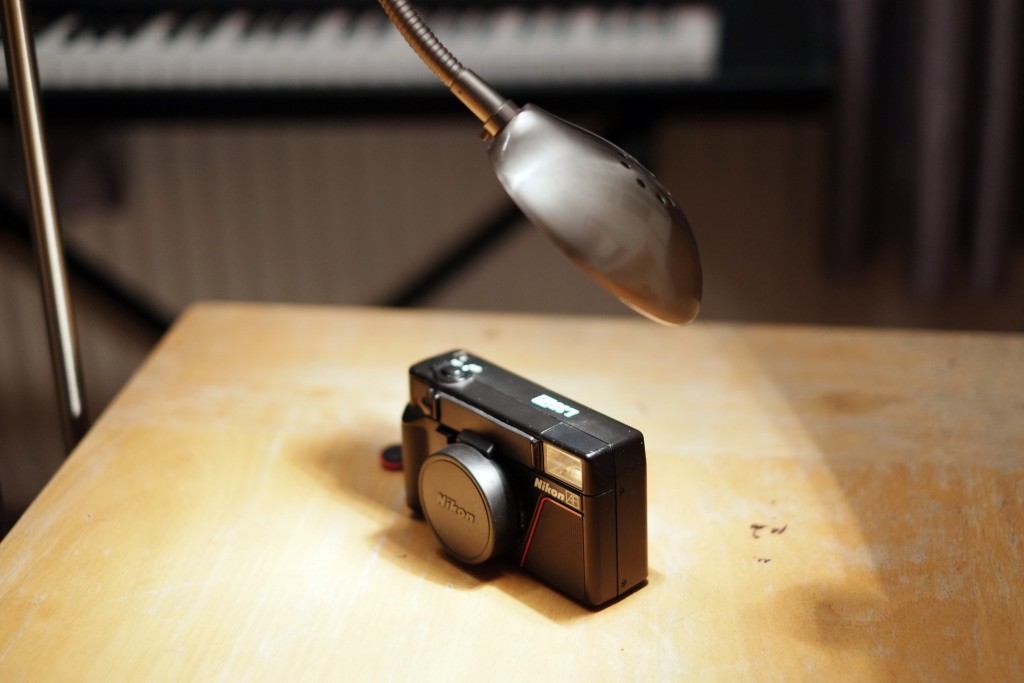 A Nikon L35AF warming up under a halogen light

Whatever the reason, fixing slow wind-on motors, a failure to wind beyond a particular frame or a completely stuck shutter usually means opening them up and googling for detailed repair instructions but I did get one “will it/won’t it” shutter going by repeatedly sitting it near a radiator or under a bright hot halogen lamp for a few hours then shaking it then putting it in the fridge and reshaking, shooting the shutter a few times between each cycle. The theory being that the temperature change is just enough to slightly expand and contract the components to release microscopic grubbiness. Or might just have been luck.  In fact – just give it a fire and shake whatever – nothing to lose (as long as you’re sensible about the vigour of your oscillations).   Once they’re going they usually stay going as long as they see the light every now and then.

Less typically (ie. once in my experience) a dodgy connection between the flash and the rest of the circuitry caused an erratic shutter.  This led the camera to think the flash was up but didn’t actually engage the flash charger so locked down the shutter.  Easy to fix but does mean dismantling and being very careful around the flash capacitor.  Pressing down (very) hard on the flash for every shot worked (and gave me a hint about root cause) but was a total pain.  More generally if you have the flash up it always wants to fire and won’t let you shoot till it’s charged.  That can feel like a problem if you’re used to cameras that fire but at slow speed if there’s no flash charge and is another reason to get good alkaline batteries.

There are lots of more serious reasons why things might go wrong but it’s definitely worth checking the above (especially the battery bits) before opening or giving up on an L35AF.

And if you do decide that you need to open one up make sure you pause to admire the innards. The L35AF is a very beautifully built camera.