Short of lenses attached to various point & shoot cameras it’s been ages since I’ve shot with a zoom. I am of course a prime lens snob. Blah, blah, limitations, blah, blah, small size, etc – you know the score by now…. But, this Nikon F75 project was based on some ideas about challenging my own preferences, so why not challenge them further and shoot a zoom…?

It’s been about 5 years since I deposited my Nikon F60 into a box in the attic. It was my first SLR, a camera bought second hand around 17 years ago in my late teens. I retired it for an F801 about 12 years ago – the 801 was actually partly responsible for me meeting my wife, but that’s a story for another day.

I can’t really remember why I put the F60 in the attic, I must’ve known the potential ailments I could have caused to it by putting into an environment where temperature and humidity could vary so much… I’m really not sure what I was thinking. Anyway, whilst the the camera suffered a little, by some miracle the lens attached to it seems to have survived reasonably well – it’s a little more dry sounding than I remember it being, but other than that it works fine.

One of best thing about this particular part of my F75 experiment is that it’s not cost me anything. But actually, even better than that, I remembered the lens in the attic being the 35-70mm, so finding the 28-70mm made for quite a nice surprise. The 35-70mm is a lens that gets an honorary mention in KR’s 10 worst Nikon lenses, whereas he rates the 28-70 quite highly, with apparently pretty good reason too. As he mentions, and indeed as is talked about in much greater detail on the wonderful ‘Photography in Malaysia‘ website, this lens was this fairly highly regarded in its day for being the first from Nikon to include a sort of pseudo-aspheric lens. Of course it’s still very much a consumer zoom, and as was pointed out to me on Instagram not as “good” as the f/2.8 version. Whilst this statement is undoubtedly true if you’re only considerations are around the advantages that come with a f/2.8 lens for lower light, and perhaps some increases in image quality, it’s not true if your main concerns are around shooting small, light weight gear…

I’ve been down the big zoom path before. When I used to shoot a Nikon D3 for work I had the 16-35, 24-70 and 70-200mm zoom lenses, all of which were very good lenses, the latter two both being f/2.8 monsters. I sold them for prime lenses when I became a snob, and I’ve never really looked back. That was some heavy and cumbersome gear, and actually it still needed supplementing with faster primes for my purposes. I sold the zooms when I realised I was shooting the fast primes more. Buying the Nikon 28mm f/1.8 was a real revelation to me – I still miss that lens. Anyway, I digress, the point is I’m not a big zoom kinda guy, but this isn’t a big zoom, it’s a small zoom.

What I hadn’t quite realised just how much I missed is the ease of use that comes with a zoom, specifically given the chosen subject matter and shooting scenarios I’m talking about in this post. One of the main reasons I love a compact camera, in fact, one of the main reasons I rediscovered the compact camera and subsequently started this blog was how easy they are to shoot with whilst also attempting some level of parental responsibility. Treating this Nikon F75 as a point & shoot in fairly decent light has definitely seen my favourite results so far. Adding to that equation this zoom lens and taking it out for a walk with the kids and dogs, if anything, built on that point & shoot experience, and therefore the joy I had in shooting it. 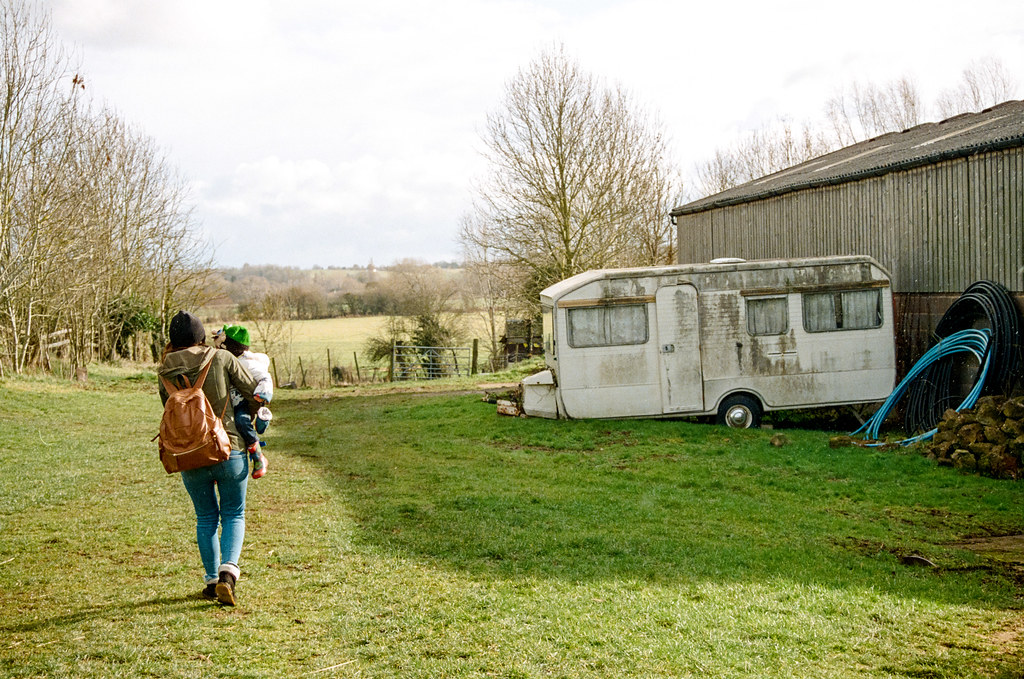 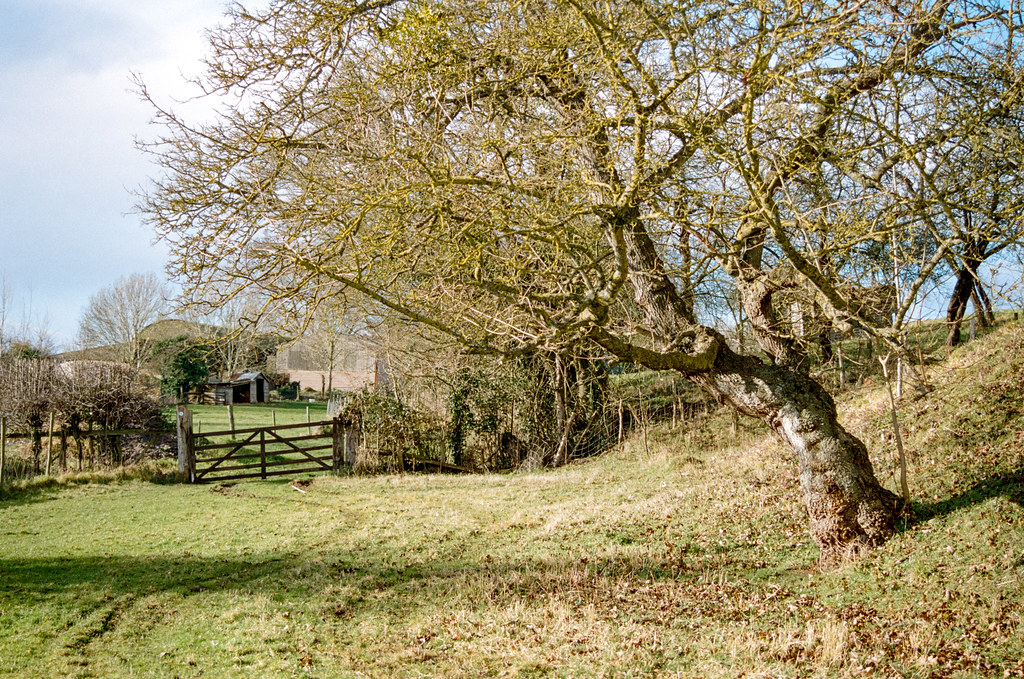 As daft and obvious as it might sound, zoom lenses allow quite significantly easier framing when your limited in your ability to take your time with composition due to the fact that you also have half an eye on two dogs and two children.

The only real issue I had was sometimes having to take the camera away from my eye to set the zoom with a hand that was also holding a dog lead. Fortunately I’ve just about enough ability to mentally picture my frame at 28 and 50mm to be able to approximate how I wanted to frame – and if I wanted to zoom in to the maximum I could achieve, that’s what I did. 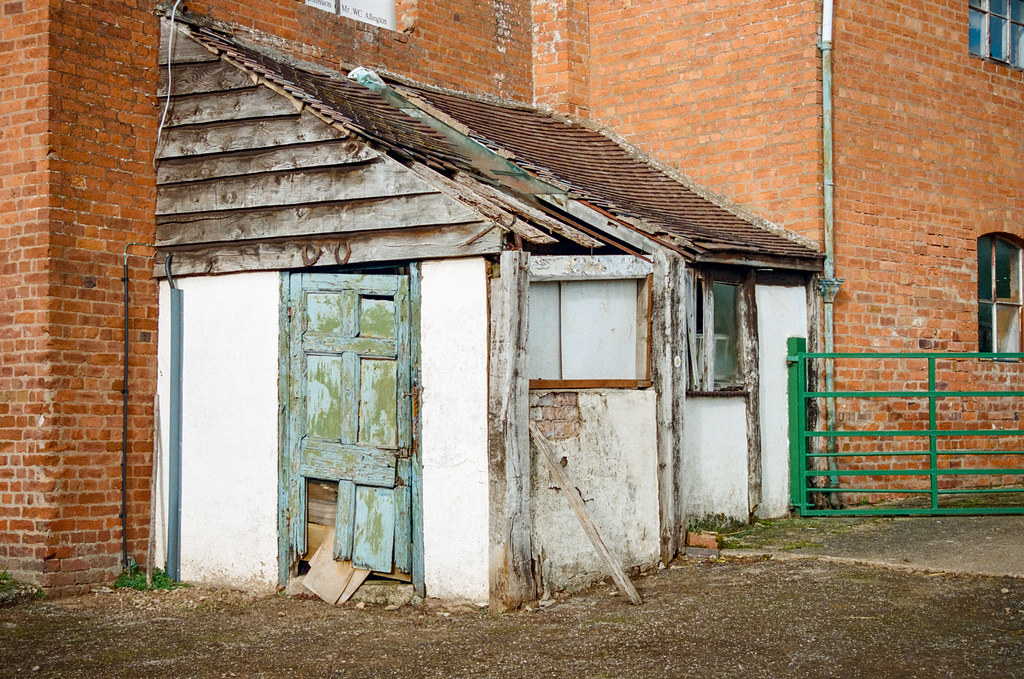 That said, funnily enough, I found 50mm too wide most of time compared to what I expected. There was at least 3 or 4 times I reset the lens to 60mm after putting the camera to my eye with it set at 50mm. I initially (and slightly smugly) came to the conclusion that this might be because I’m used to my Leica cameras and Leica framelines are slightly smaller than the field of view of the lens. I later reprimanded myself for the internal smugness when I realised that the F75 finder isn’t a 100% finder so would also be cropping slightly too. In short, not quite sure what that was about, but it made no real odds, other that the fact that a more of the images in this post were taken at 60mm than any other focal length. 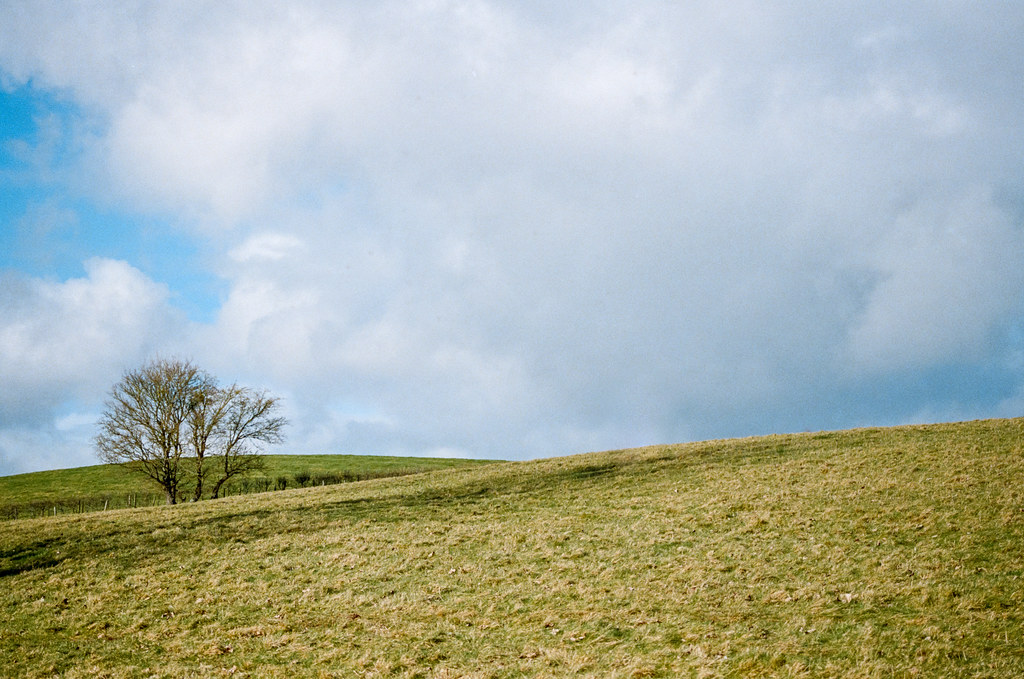 Image quality from the lens

It almost seems unnecessary to talk about the image quality of the lens. “Plenty good enough for this purpose” seems pretty much like the only point worth making.

As you can see, I did suffer a bit of veiling flare shooting toward the sunlight, perhaps more than I might have expected. I did think this might be a flaw in the lens due to its slightly less than ideal storage, but actually it looks ok with a bright light shone through it, and it doesn’t have the usual “glow” associated with the onset of haze. Perhaps, like many lenses, it just doesn’t favour direct sunlight – it is a zoom from the 90s after all. 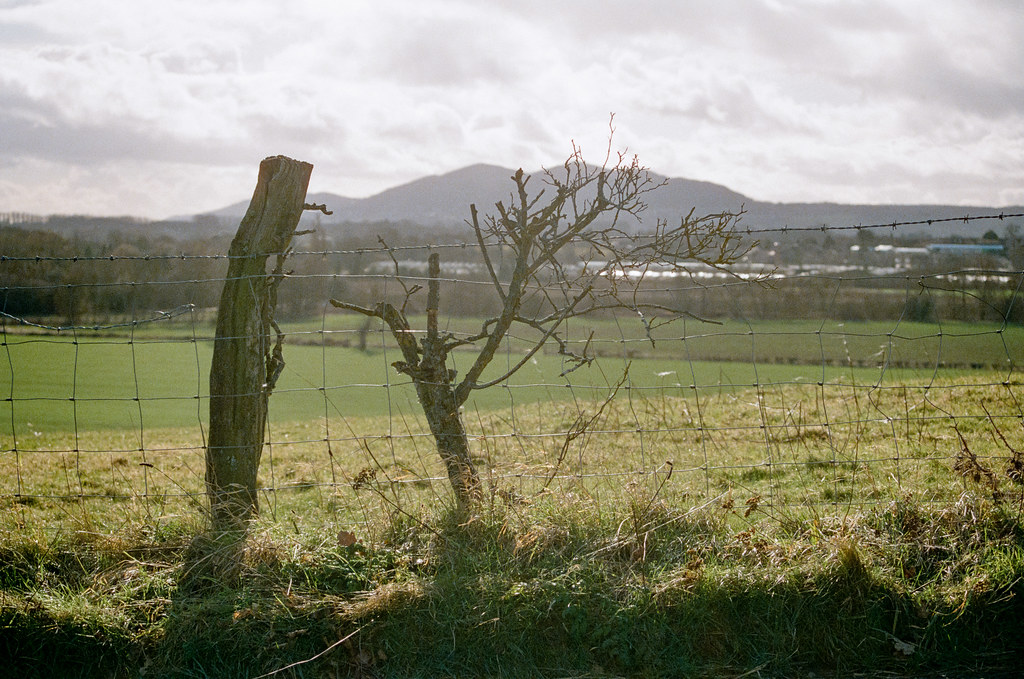 Of course the nice thing was, since I was shooting an SLR, I could see the veiling flare through the viewfinder. As such I was completely expecting it in the final results. This particular shot, I’m very pleased with. 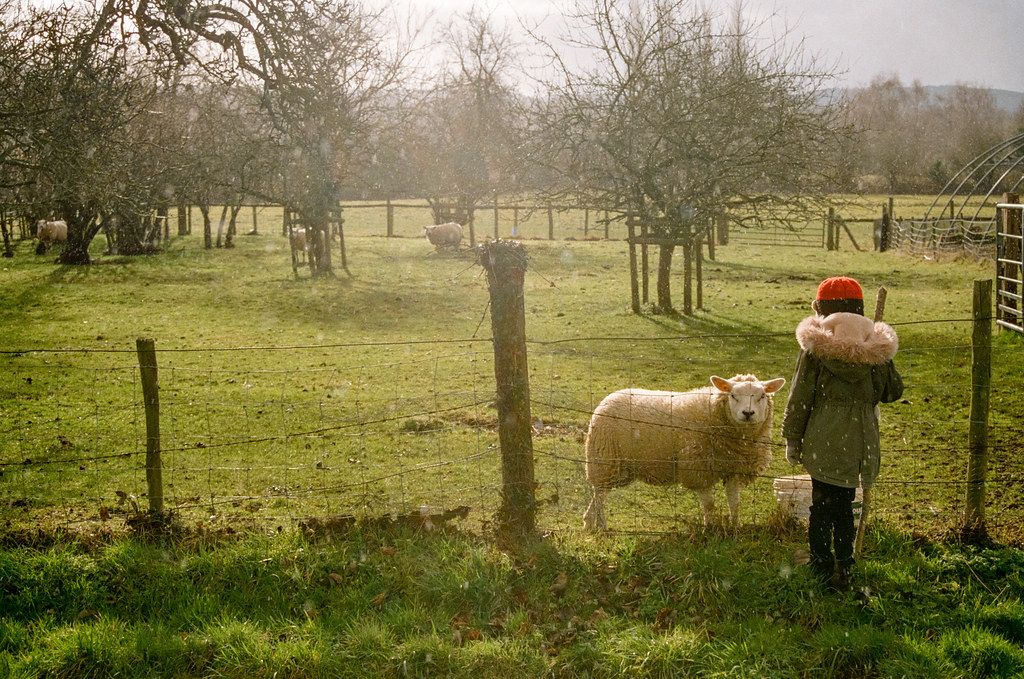 It was lightly hailing and Connie had made friends with the sheep, the sun was in front of her and when I raised the camera to my eye I instantly saw the flare that was going to effect the end result. I’m really pleased with the atmosphere – this photo just feels how it was in that moment to me. As if it needs saying, it just goes to show you don’t need the “ideal” kit.

I also found myself with a bit of ghosting in this next shot – though again given position of the sun in the frame and the age and type of the lens, it’s not really surprising. 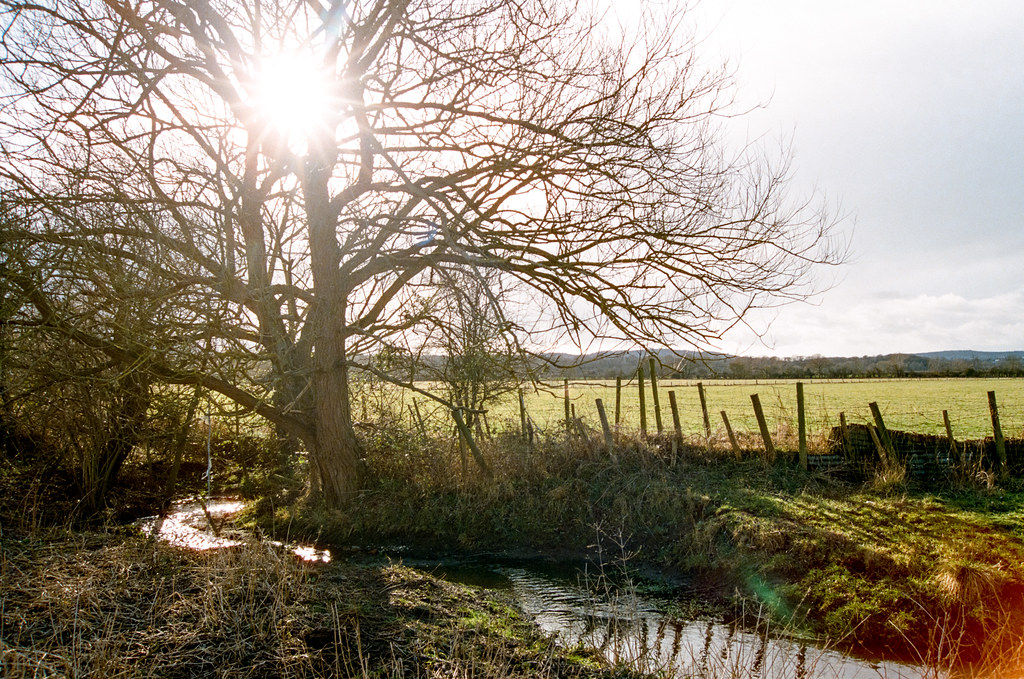 Other than the flare, for this sort of photography, I really didn’t notice anything that would cause me any real concern. Bokeh is perhaps a little less the perfectly smooth, it vignettes when shot at the wider apertures, I’ve also read that it distorts a bit, but I didn’t find that any of this impacted on the photos I took in any meaningful way. I guess this is the reality of a half-decent consumer zoom…

Final thoughts on the zoom experience

This Nikon 28-70 is a keeper for me… that’s actually a fairly obvious thing to say given the fact that I’ve already owned it for nearly two decades. What I really mean is that I will be keeping it and using it again. It was a genuine pleasure having the versatility my fingertips. I almost (read: definitely do) feel like a bit of an idiot turning my back on gear like this. It’s not big and heavy like those 2.8 monsters I lugged around, and whilst it might not have every ounce of the character I enjoy in something like my Zeiss ZM Sonnar, it has enough about it to not disappoint me or make me wish I’d taken something else when I’m out with the family. 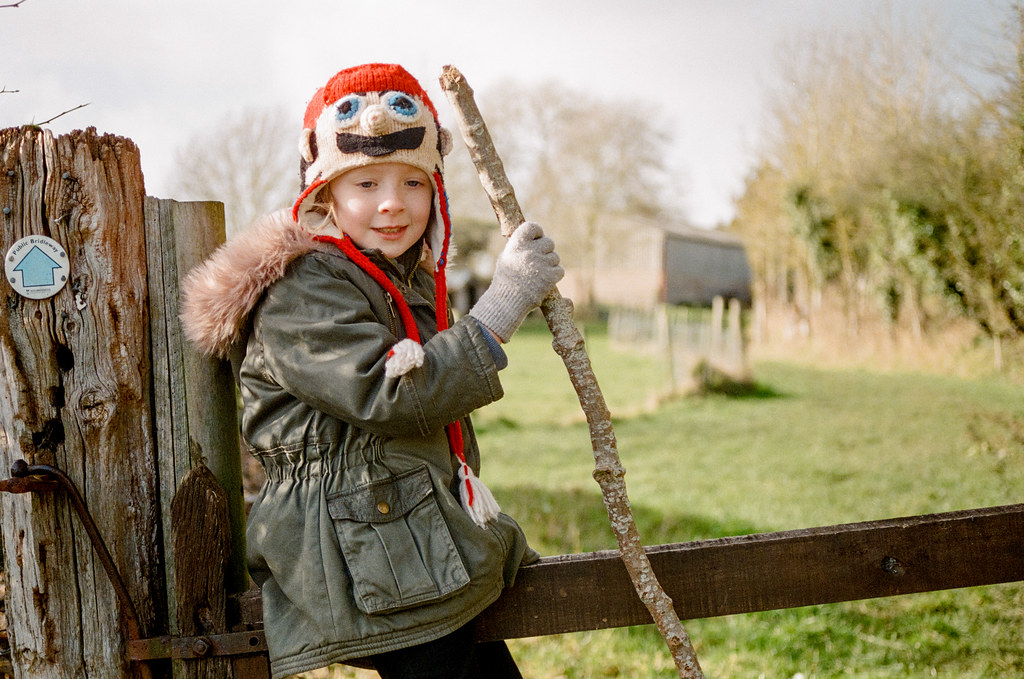 Thoughts on the F75

This all said, my appreciation for the F75 has been dwindling a little bit. I shall come back to this in what I’ve decided will be a final post about my experiences with it in more detail, but for now I shall say, despite earlier positivity, I think it might actually be too small, and too light. It certainly didn’t feel quite balanced with this lens on it… A final word on the film

Before I end the post, I just wanted to give a little shout out to Kodak Alaris for effectively sponsoring these images by providing me with some free film. As I’ve mentioned a few times, they sent me a little care package just before Xmas that contained – amongst other things – a couple of rolls of Portra 800. These images were shot with one of those rolls… and very pleased with them I am too. I shall come back to why I wanted to shoot such a fast film on a sunny day another time…