Ricoh FF90 Review – The camera that got in a fight with 80’s style, and lost!

The instant you see the Ricoh ff90 you know it was made in the 1980’s. it looks like it got in a fight with 80’s style and lost! Just look at those angles! I am fortunate enough to like this sort of design, it is possible that being a child of the 80’s and being subjected to such things at an impressionable age left it’s mark. Don’t get me wrong, I wouldn’t choose something based on this sort of design, I’m just not offended by it. It’s also somewhat of a brute of a thing, it’s taller and wider than my Yashica T5, not fatter though. Luckily I’m a wearer of loose fitting trousers so my pockets are plenty big enough for a camera like this, but I would doubt everyone would be comfortable with the bulge in the trousers it creates … So to speak …

The handling isn’t ideal. Despite Ricoh ff90 being so huge, because the lens is offset toward the side of the camera with the shutter release the grips have been designed so you clasp the edge of the camera. It’s not particularly comfortable to grip in the intended way, but it does at least mean that stray fingers don’t naturally want to go anywhere the lens.

The viewfinder is fine in most circumstances but suffers quite badly from internal reflections should you choose to shoot into light. I find this a little distracting, and even with the little use I’ve had out of it so far there have been a few occasions where the subject has been partially obscured by these reflections. Otherwise it’s fine, bright yellow frame lines with parallax correction marks within a slightly blue tinted view. There is also a 3-symbol-based focus zone indicator, a head and shoulders for close up, two people for the middle distance and a group of people in front of a mountain for the furthest distance. Not the most informative viewfinder I’ve used, but better than nothing! 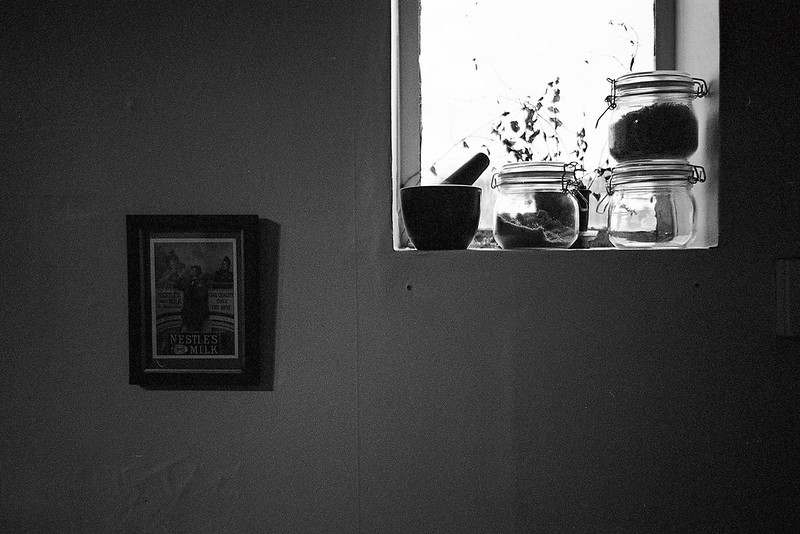 Frame, Window – taken at my mate Chris’s house – This framing did cause a few problems with reflections in the VF, but it didnt cause any issues really.

The top of the Ricoh ff90 is fairly OTT! I’m not sure there needs to be such a large screen for such a relatively small amount of info… It looks cool though! There are four buttons, although one of them ‘display’ switches some sort of screen demo on and off so can ignored (unless anyone can tell me otherwise). BCL/+2 is a +2ev exposure compensation button for correcting for a backlit subject. A self timer button and an ISO button. The ISO button is for setting the speed of non DX films. Putting a DX coded film in the camera locks you out of the functionality of the ISO button, but if you put a bit of tape over the DX coding strip you can set the film speed to whatever you wish (up to 1600). This feature also gives a slightly rudimentary method for exposure compensation. Unfortunately you won’t be able to make any decisions in a hurry as the single button for ISO selection means you have to click through settings one by one. 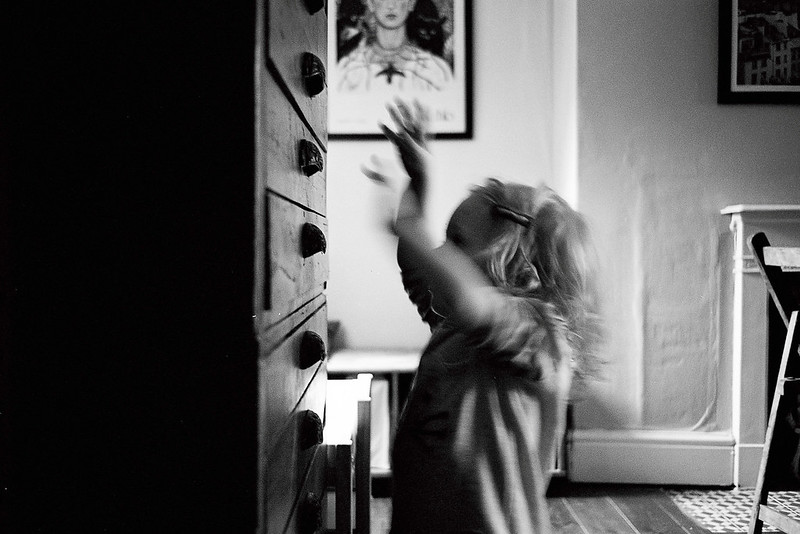 One of a few shots I underexposed by 1ev on this roll by playing with the iso button. This also one demonstrates it’s eagerness to shoot, I had no problem jumping into position and firing the shutter for this shot!

The flash is a bit oddball in its operation, it is essentially a fully auto flash with two very manual overrides. When flash is required a little switch will pop up on the top left hand side of the camera, it squeals until charged, and once charged allows the shutter to fire. For fill flash, to switch the flash on when it is otherwise disengaged you have to put your finger over the light sensor next to the lens. The auto flash can also be overridden by pushing the button back down again when it pops up.
This actually makes for a very useable flash, the camera effectively remains on auto the whole time then depending on the situation you can override it on a shot by shot basis.

It would have perhaps made more sense to make the seemingly pointless ‘display’ button a flash mode button, but I actually quite like how this flash operates. An extra button with more features might not have made anything any easier … I often leave my cameras with the flash set to off. It is sometimes a faff to have to switch it back on. At Least this way it’s always there if needed.

One thing I really like how about the Ricoh ff90 is how eager it feels, of you have read my yashica review and Konica Big Mini review you might be familiar with my fondness for an eager shutter. This camera feels like its ready to snap as soon as you are. This shot demonstrates this nicely, I had barely framed the shot when the bird flew into frame… I was able to react quick enough to capture it in flight. Had this been the Konica I doubt very much that I would have got the shot here. 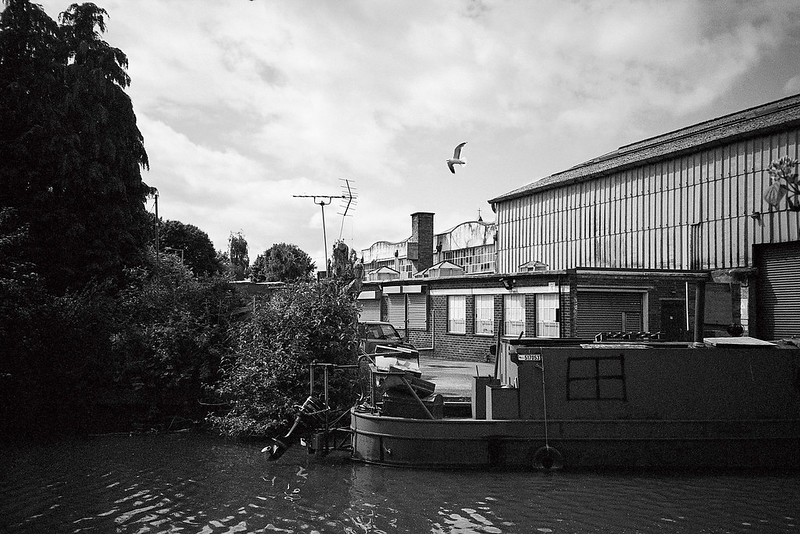 Overall I would say I like the Ricoh FF90, I’m not sure the results quite have the punch of the Yashica T4/T5 but they are good enough to be very happy with. 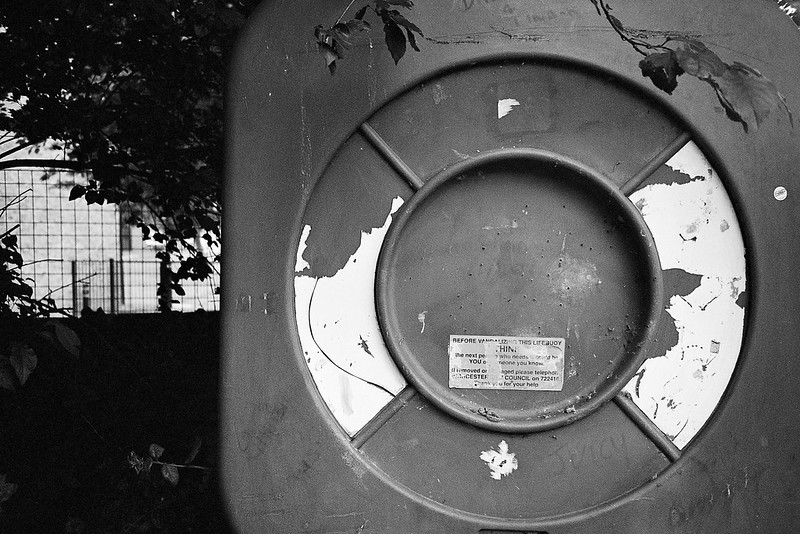 Plenty of detail captured by the lens 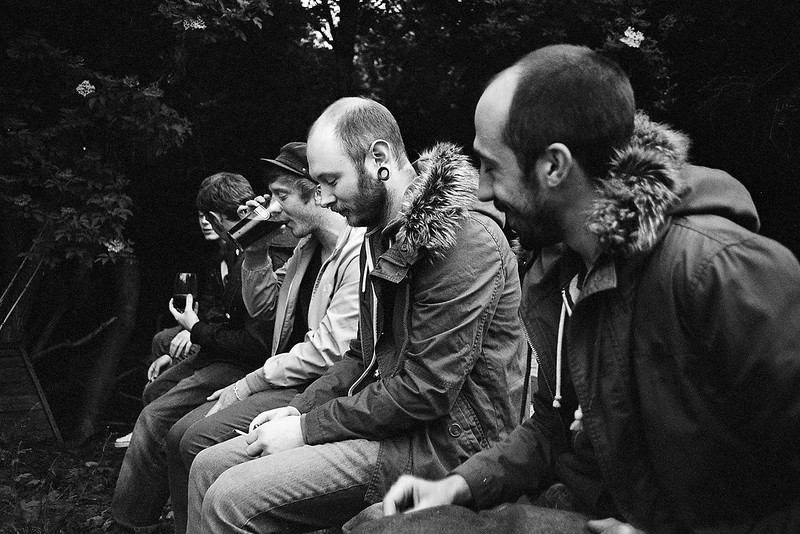 I really like this shot, the second chap in is a mate Tom who has moved to the other side of the world.

A few more from the roll are here on flickr

I expect I will use the Ricoh ff90 again at some point, if for no other reason than how quick it is! It also looks awesome … well, provided you grew up with transformer toys anyway!

Plenty more of these 35mm 3.5 lensed cameras to review, I’m looking at putting one together for the mju-ii soon a camera I’m currently enjoying quite a bit. I am still yet to find one I like as much as the Yashica T5 though!

The Daughter's 2nd Birthday - Shot with a mju-ii