I have two hobbies: Cameras and Photography. I’ve warbled on about this before, but recently experienced a situation where the difference between the two felt really quite tangible.

In the run up to Christmas, almost invariably, I begin to find myself feeling a little burned out. I have two holidays in a year, one in the summer and one in the winter, and even though the winter one comes sooner after the summer one than the other way round, I always feel like I need the Christmas break more.

Last year, that feeling was exacerbated by the launch of pixl-latr in August and the virus that’s been hanging over us all. I mention the launch of pixl-latr though as really, it has been the cause of quite a lot of stress. Stress for me isn’t always a bad thing, I think I work better under pressure. But the combination of a lockdown in November that meant the work in my other businesses ground to a temporary halt (again), and a desire (need) for pixl-latr to do well over the Black Friday weekend meant that the stress was a little more tangible than I like. The deadline of Black Friday to get it a load of marketing stuff ended up a bit of a brain-fryer. We didn’t give ourselves enough lead time to sort it all out, and I got myself into a bit of a stress about it all. So much so, that by the morning of the Friday itself – short of some sort of burnout – I really felt like I needed a break.

Unfortunately, I’m not very good at giving myself a break. If I’m not focusing on one business, I need to feel like I’m pushing one of my other endeavours forward. That said, when I need an escape from the stuff that feels more like work, I find myself defaulting back to working on 35mmc. This website is part of my working life these days, but for the most part, it doesn’t really feel like a job – it has, in that sense, been a bit of a lifesaver this year…

One of the highlights of me running 35mmc is the kit testing I do. Being able to find the excuse to grab a lens and camera and go out for a walk because I “need to take some photos for the sake of a review” really works for me. And that Black Friday morning, this was exactly what I had in mind to do. All the pieces of the pixl-latr puzzle were in place, the sale was launched, we had a plan about what and when to put stuff on social media, and so I found myself with a 2 hour window of opportunity to take a “break”.

I also needed to take some pictures for my MS-Optics 50mm f/1.1 lens review. I was a big chunk of the way through writing it, but needed to test it a bit and create some images to demonstrate its optical properties. I live near a woods, and enjoy shooting there for the sake of these tests, so that’s what I planned to do. I was going to spend some time enjoying my camera/lens hobby.

But then, just as I was about to leave the house I decided I wanted to take some photos for the joy of taking photo too. It was a misty morning and I’d been waiting for this sort of weather to shoot my full spectrum converted Fuji X100 with a 720mn filter for some black & white infrared photography.

The convention with shooting black and white infrared photography seems to involve shooting it in the sunshine in the summer when all the leaves are on the trees and the sky is blue. The result of this tends to be – in my opinion at least – too much contrast. Black skies and bright-white leaves leave me a bit cold. The IR photography I’ve seen taken on flatter days has resulted in levels of contrast I prefer, and the shots I have seen taken in the mist/fog really have something about them. As such, with it being a bit misty, I thought it a good opportunity to try my hand at such photography.

So off I went with the Leica M10-P and MS-Optics lens over my shoulder and X100 in my pocket. The funny thing is, I normally get myself in a bit of a stress when I take out two cameras. If I am testing two cameras at the same time, I get that conflicted feeling around which one I should be shooting for which scene. The difference on this occasion was that I had very specific goals for each bit of kit.

The goals for the MS-Optics lens were to test the character of the lens – I was looking for areas in the woods that I could test the bokeh, the transition zones, wide-open and slightly stopped-down sharpness. This was all stuff I’ve done a million times before. It’s not much of a creative process, instead it’s an analytical process. And moreover, it is a process that involves me thinking about cameras and lenses, and not so much thinking about photography.

Conversely, with the Fuji X100 I had some much more creative goals in mind. The X100 also makes a really good camera for IR photography. The optical viewfinder allows you to look at the real world, but switch it to digital viewfinder mode with the camera set to black and white and you are provided with a much more WYSIWYG experience. That is to say, I could look through the viewfinder and see the black & white IR image I was about to take.

It’s also a really simple camera to use, and is a camera that I am really comfortable with. As such, when shooting it, I feel that it entirely removes itself from my psyche. I also had some very specific ideas about the sorts of images I wanted to take when it came to framing and taking advantage of the mist in the woods combined with the IR look. As such the process of shooting it felt nothing about the camera, and everything about the photography.

In the end, despite having gone out with the primary goal of taking shots for the MS-Optics review, I ended up taking a lot more photos with the X100. I did take a few images for the review, and felt just as relaxed and happy I had hoped. In doing it, I did indeed feel like I was having the break from work I wanted.

But as soon as I started shooting the X100 I realised that the real photography was the real break I needed. Doing something genuinely creative that was purely for the fun of doing it was what my stressed-out brain really craved. After about 20 minutes walking through the woods getting a whole load of images that I was really pleased with, I found myself feeling a lot more relaxed and calm than I had done for a while. 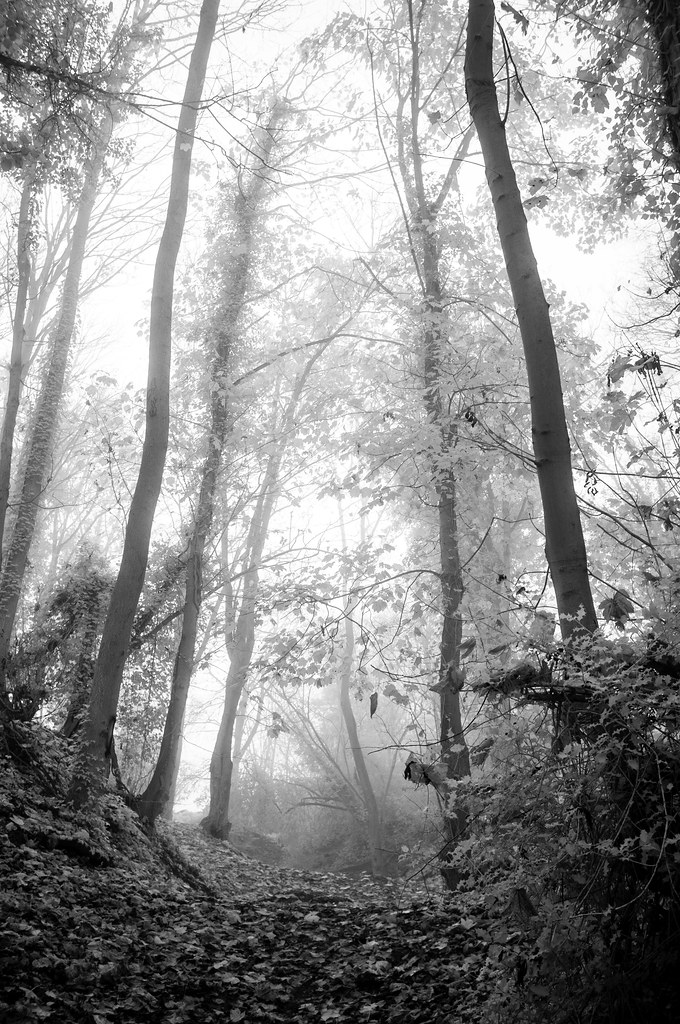 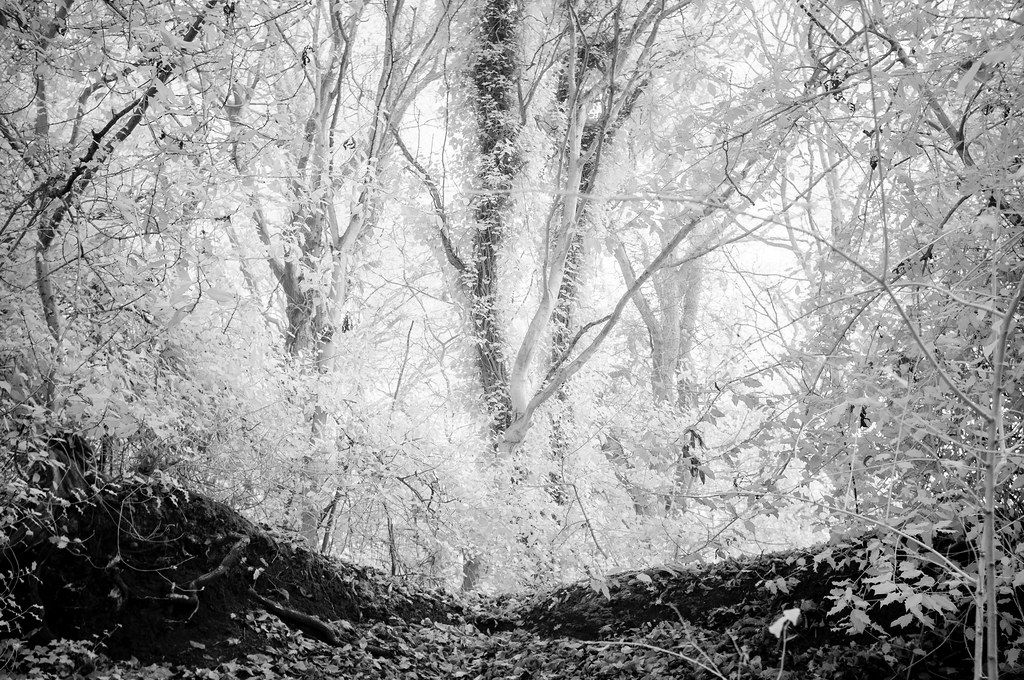 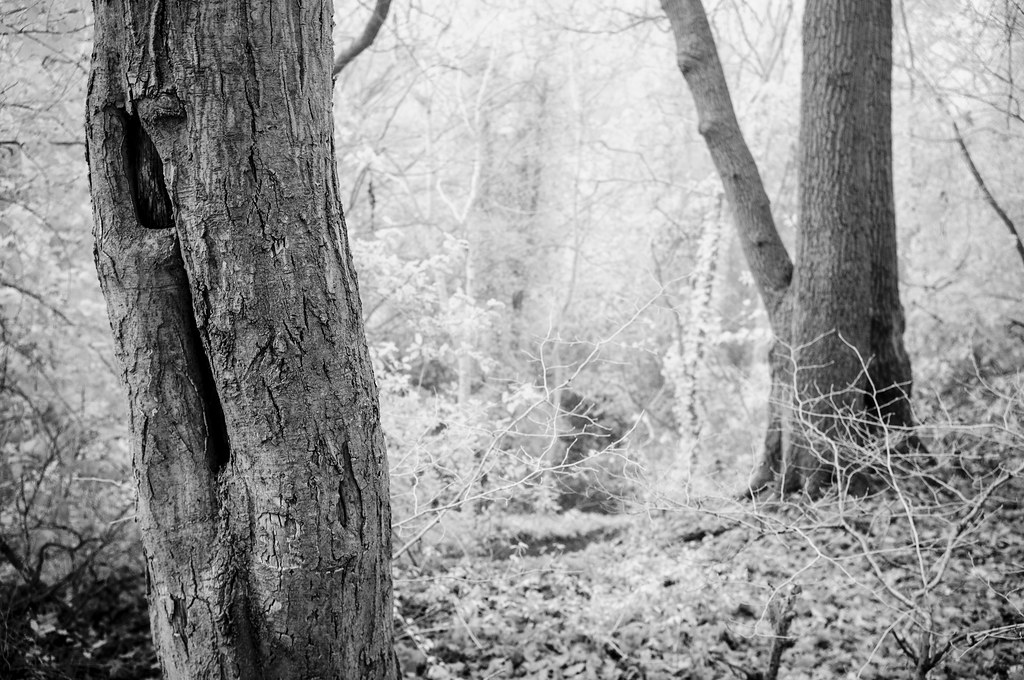 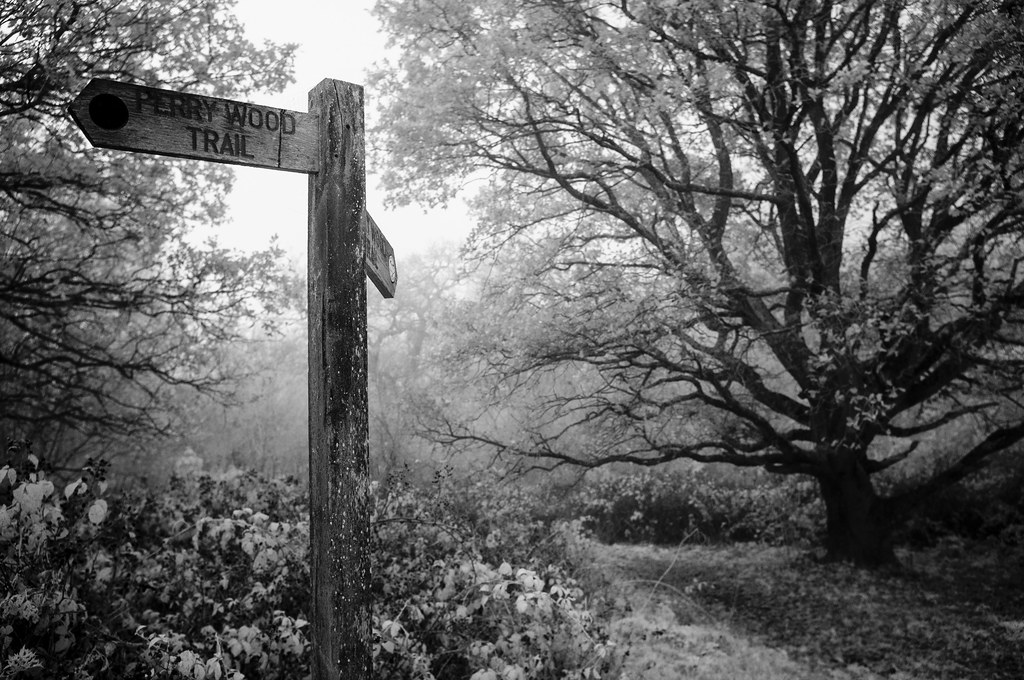 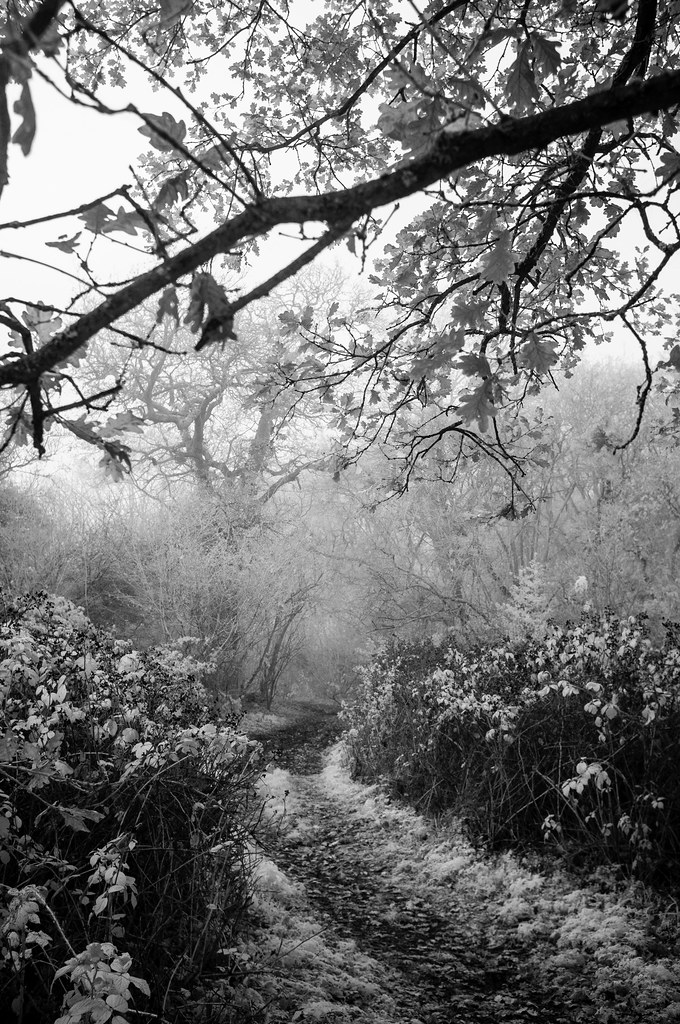 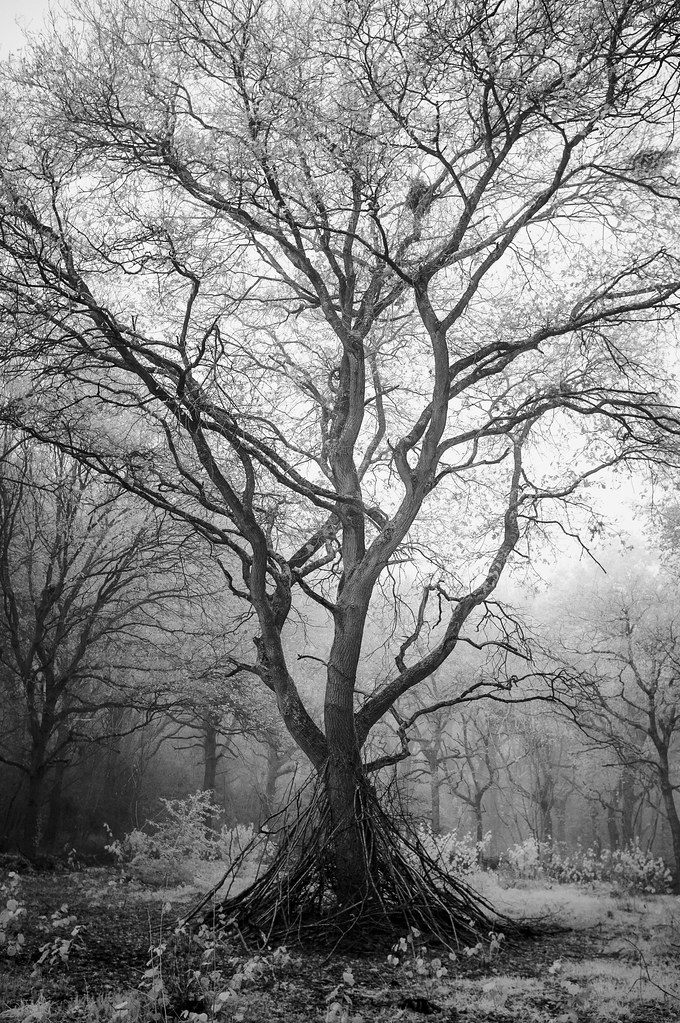 This whole experience really brought home the difference between my camera hobby and my photography hobby. It made me realise just how much I enjoy the cameras, but in a greater measure I also realised just how much more simply taking photos is really where the enjoyment is for me. It also reminded me just how important it is for me to take a proper break from work sometimes. I got home – albeit quite a bit colder than I was when I set out – with a much clearer head.

I think I say this every year – I certainly did last year – but this year I really am going to endeavour to take more photos just for the sake of taking photos. I’m also going to see what else I can do with this IR filter on this Fuji – I am absolutely blown away by these results!

The rest of the images I took on the day can be found here. I also shared more thoughts about how good the X100 is as a basis for conversion here. Finally, if you want to buy something from Kolari (who converted the camera for me), they gave me a code that gives you a small discount and me a little kickback too – when checking out on their site, use the code hamishgill Tokyo XPan - A Cinematic View of Japan - By Mike Amos