Since writing my first Leica M3 post – and in fact actually not long after I published it – I found myself in the possession of a rather tatty Leica M3 double stroke. At the time of writing this first post I had no direct experience of an early model, yet despite this I managed to be fairly fervent in my conclusions about buying a late model. Because of this I thought it worth an update to reflect this more recent and actual hands on experience of the M3 DS.

Before I get stuck into this post, let me just point out that this is effectively a part 2 to the first Leica M3 post. So if you have stumbled across this looking for general info, or if you want broader depth of opinion on these cameras, I’d start here first.

Buying a Leica M3 double stroke… by accident of course…

It all happened at the 2015 photography show at the NEC. I was there to pester Leica to loan me an M-A; a mission I succeeded in quite quickly. After doing so, I found myself wondering around with my mate James quite aimlessly. I know the chaps who work in my local london camera exchange quite well – James being one of them as it goes – so we went to visit Gareth, the Worcester store manager who was working on the LCE stand. He told us about an elderly chap who had nearly traded in a Leica M3, but had left without doing the deal. Despite owning one, I was a little disappointed and mentioned I’d probably have had it off him.

Back to wondering around the stands, and about 30 minutes later Gareth got in touch to say they had taken in the Leica. I went to see it, and it turned out to be a 1955 M3 DS in quite a sorry way. Apparently this chap had owned it since new. It was certainly well used and felt a little like it had sat in a drawer for a few years. It had bits of vulcanite hanging off it, the shutter was sluggish at slow speeds, the body scratched and scathed, the rangefinder out of alignment and the viewfinder was hazy. There was also a filter stuck on the front of the 50/3.5 Elmar that came in with it. And unfortunately, the front part of the lens was near hanging off where someone had attempted to removed the filter and caused damage in the process. In short it was a bit of a mess. So I bought it. On the drive home I sat in the passenger seat, slightly worried about what I had bought wondering a little if it was just going to turn out an expensive paper weight. The one thing that made me feel ok about it was just how damned smooth the shutter cock action was; in short, it was unbelievably smooth! 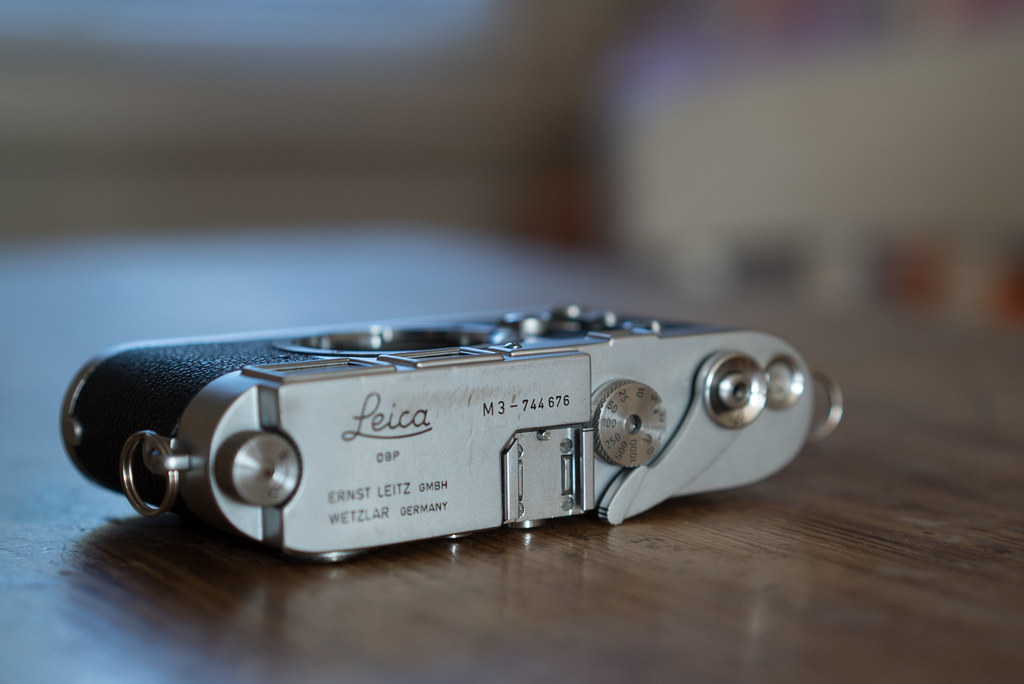 I sent it for a CLA almost straight away. Outside of the work I’d had done on my ‘blad a few years ago it was the most expensive camera service I’d ever paid for. But, it wasn’t as bad as I had feared it could have been and was definitely worth it. It came back a wonderful thing, still scratched of course, but working a treat! It actually landed on my desk just after the M-A did from Leica. And since I was only to have the M-A for a short period of time, concentration had to remain with putting my thoughts together about that. But, after the M-A was returned to Leica, the M3 double stroke was the first camera I picked up. It certainly made the return of the M-A less painful!

Going back over old ground, the Leica M3 double stroke vs. single stroke

Whilst researching the purchase of a Leica M3, I’d managed to put myself off one of these early models. But I’d never put the intrigue about them out of my mind. This purchase was the ideal opportunity to answer some of my questions about these early models, and more specifically whether or not the conclusions I came to in my first Leica M3 post were were ill founded. I think the best way to approach this would just be to readdress all of my rationalisations in the same order I did previously…

The most obvious place to start – both last time and this – is the shutter cocking and film advancing mechanism. As previously mentioned, the early Leica M3s had a mechanism that had to be actioned twice in order to cock the shutter and advance the film. This action is of course where the nickname “double stroke” comes from. When I was looking to buy a Leica M3 originally, without any real evidence as regards whether or not the action of the double stroke shutter cock was smoother, my rational became solely about whether or not the double stroke would bother me in use. I’d decided on balance that since the advance is ratcheted the single stroke can be actioned twice if I wanted to, to this end, the single stroke would give me the best of both worlds. With the double, I was stuck with two actions. Well, in truth, this rational was pretty meaningless. The reality is, with a double stroke, I barely noticed the difference. I realise in hindsight that actually I double stroke all of my Leicas subconsciously anyway.

To be honest, I have no idea whether or not the M3 DS I have has a glass pressure plate or not. I did a bit of research after buying it and found comments about being able to tell based on it being framed rather than not. You can see in the picture mine has a rim around the edge…? I think this means it is a glass plate? Does it make any difference to anything? Not to my mind. 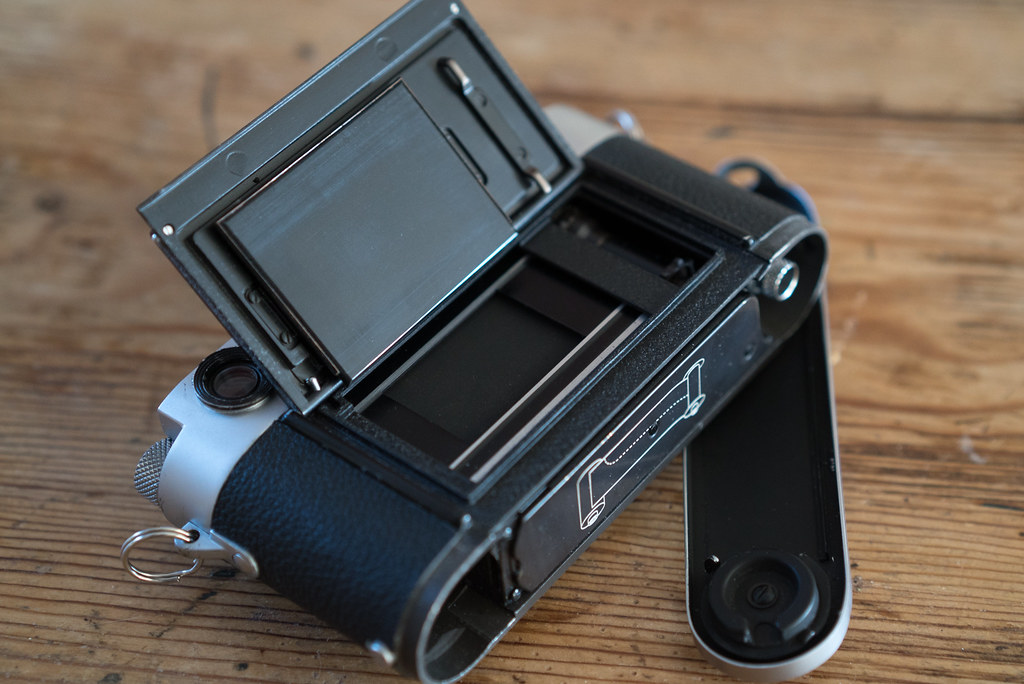 The problem is, the MR meters don’t match the early M3 shutter dial as they have the later speeds. On face value I wouldn’t have thought this to be that much of an issue, the closest speed would just match up. Unfortunately, in reality, this is not the case. The problem is, the older speeds had 11 settings, and the newer had 13. This means that if you mount an MR meter to an older camera the shutter speeds don’t line up at all. The frustration is saved slightly by the 1/50th on the old dial matching the position of the 1/50th (sync speed) on the new dial. This means you can at least work out what speed you are at from that point rather than having to count up or down from the extremes of the dial. Unfortunately, now I’ve found the joys of an MR meter, this has actually become quite a big deal for me. I mentioned in my last post about the Leica M2 just how picky I’ve become about my Leicas, well this is a good example of that pickiness!

The rangefinder patch and other considerations.

The later M3, and indeed M2 have a notched rangefinder patch. I was intrigued by these notches, but now I’ve experienced them, I think I can see why they were depreciated. I just don’t use them, in fact I barely notice their presence. I’d be interested to hear from anyone who does find them useful though?

My final, and probably most major rationalisation for a late model M3 was the ability to focus down to 0.7 meters. I haven’t actually tried modding the early one in the way I did my late model, but from what I’ve read it might not be possible, so I won’t be trying. I only actually shot the with a lens that focussed down to 1m, but I’m sure that if I did use a 0.7m focusing lens I would notice it… In fact, for me, this probably remains the big selling point of the later model. The problem is, it’s not a standard feature and actually there is no guarantee in a late model that it can be modded. In my view, as I said in my first post, it’s best to just accept that the M3 doesn’t focus down to 0.7m, and if you get one that can, then more than anything else, just consider yourself lucky.

My final thoughts on the Leica M3 double stroke

Since writing my first post about the Leica M3, and actually broadly as a result of that writing – as I mentioned in my M2 post, and very much alluded to in my post about the Leica M-A – what I’ve realised about Leica M cameras is that they offer a great deal of choice. Changes between them, and indeed changes even within a single model production run, can provide a different enough user experience to create a pickiness in their users. As I suspect I have portrayed quite accurately over the course of these two Leica M3 posts, I myself have become quite picky. What I have also realised – as also mentioned in my Leica M2 post – is that some of the thing I assumed I wouldn’t be that bothered about actually did bother me, and some of the things I thought would bother me, didn’t. Because of this, and actually because of the particular differences made to the M3 over its production run, I find it very hard to recommend either Leica M3 double stroke or single stroke. One thing I will say is this, they are both wonderful cameras, and if you are looking to buy an M3, I would doubt very much you would be disappointed with either, and if you are, it would be unlikely you would loose any money selling it on and trying the other.

For my personal tastes though, I’m sticking to the conclusion I came to in the first post, the late model 1,000,000+ serial number single stroke M3 is the right M3 for me.

Links:
Some of the photos I have so far taken with both M3s can be found here
My first M3 post Leica M10-D – The Essence of Photography, or is Cheating Allowed? – By Marc Wick Leica M-A – From digital, back to film – by Anthony Killeen Election Day 2015 - The final push of the Worcester Labour Party