Once in a while, someone asks me what my favourite lens is. For a long time now the answer has remained the same – it’s the Zeiss 50mm ZM Sonnar. This is a lens that has loads of character already, but I recently wondered what would happen if I turned up some of the the character traits to 11 with a Tiffen ‘Black Pro Mist’ diffusion filter.

Diffusion filters have been around for years. They’re possibly a lot more popular in the world of cinema, But I feel like I’ve seen more stills photographers – both film and digital – experimenting with them lately. As I’ve said, for me, a large chunk of the motivation to try one was born out of a desire to see what would happen if I added one to the 50mm ZM Sonnar.

If you didn’t already know, the ZM Sonnar is a very characterful lens. It perhaps isn’t as sharp as some lenses, but has loads of contrast. It also reacts wonderfully to light. It’s fairly flare resistant, but catch a light source right, and – combined with the very high contrast – you can find yourself with a really beautiful atmospheric look to photos.

“Atmospheric” is the key word here too, as to me, this is what the 1/8th strength Black Pro Mist filters do. They lower contrast a little, but what I was interested in for my photography is the fact that they also add a little bit of halation to light sources. It’s this, I think, that adds a feel of “atmosphere” within photos taken with these filters. Add this to the Sonnar, a lens that also creates a feel of atmosphere, and I was very interested to see what would happen.

For all that, when I first bought the filter, I didn’t have any specific subject matter in mind. I still didn’t when I took the first photos with it – photos of an old, slightly beaten up, Audi Quattro that belongs to a mate of mine. 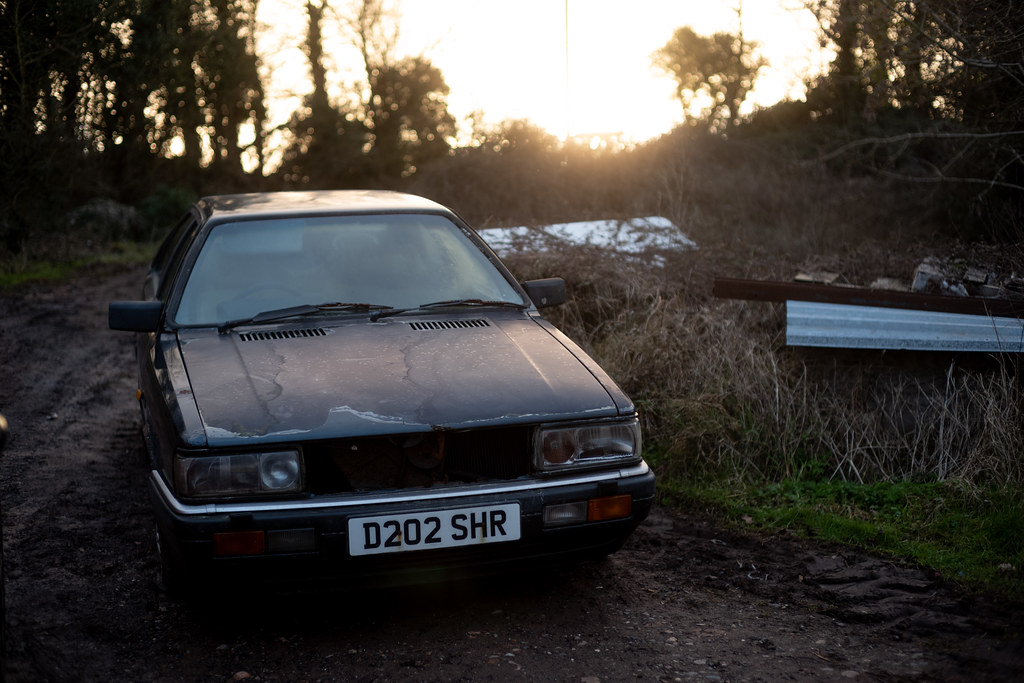 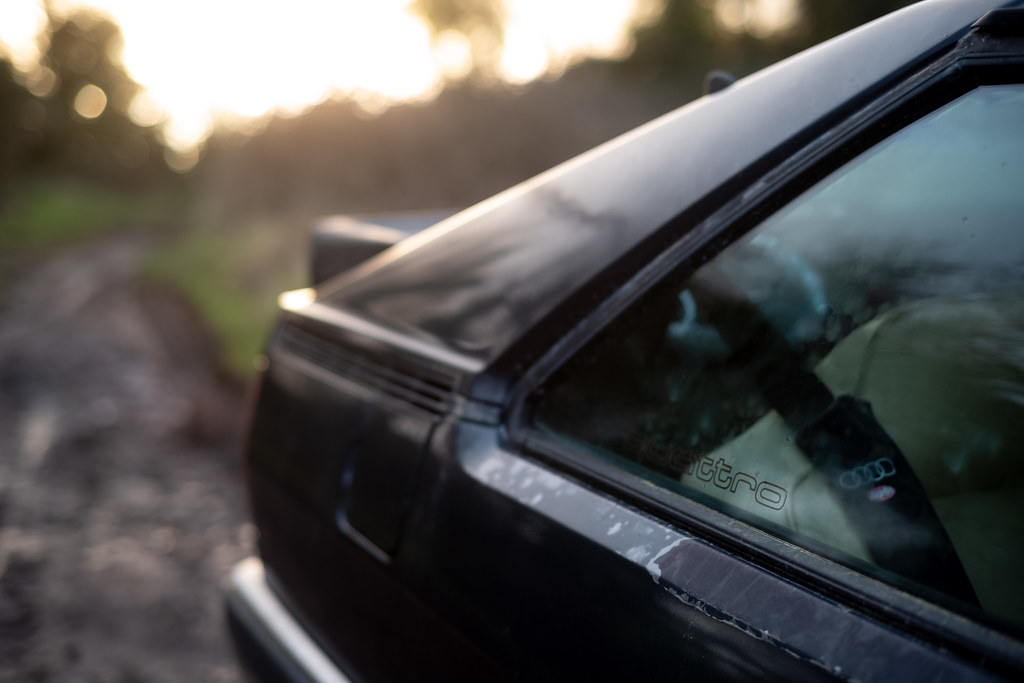 I have ended up using the filter for a few projects now – some of which I might come back to in future posts. For now though – since they serve to the point I wanted to make here quite readily, I thought I’d show some pictures from what feels like something of a developing project, or at very least an ongoing subject matter. Inspired by those first results of the tatty Audi, I’ve been using the Sonnar and 1/8 Black Pro Mist to take photos of classic cars.

I’ve always had an interest in cars. It waned hugely between my late teens and mid 30s – the fact that I moved to the centre of a city and didn’t learn to drive until I was 33 played a very big part in that. Then, a few years ago, I discovered the fun of exploring images of cars on Instagram. There’s nothing like an endless supply of other peoples cars to make you start fantasising about owning something other than just a slightly dull family-wagon.

That fantasy was made a reality last Christmas when my wife – in what I can only assume was a moment of madness – fronted the cash for me to buy a classic car for me for my Christmas present. After only a small amount of time mulling over the options, I decided it had to be a Golf MK2. This was the car I desperately wanted when I was a teenager, so why not realise that dream. 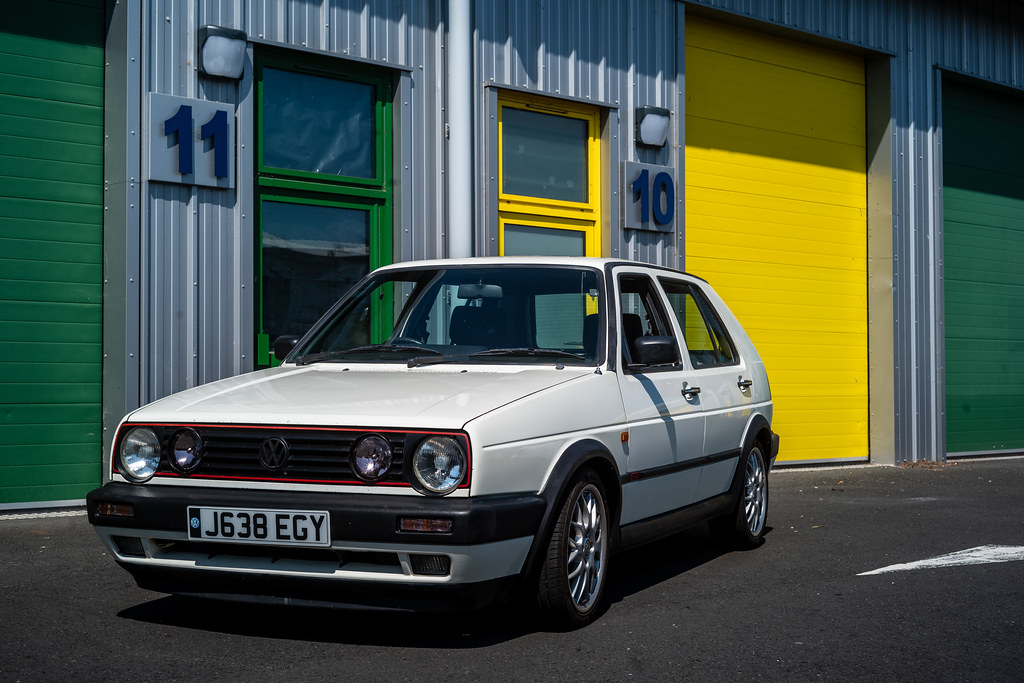 Also taken with this combo, but topped down in broad daylight the effect isn’t really visible.

Since then, I’ve found myself in a lot more situations where I’m around other classic cars and also happen to have a camera in my hand. Be it through taking the Golf to be worked on at garages that specialise in older cars, or through meeting up with other people who own the things locally, or just through taking photos of my new pride and joy, I’ve found myself combining the two hobbies quite regularly.

In doing so, to get back to the main point of this article, I have decided to stick to shooting the ZM Sonnar and Tiffen filter together as much as possible – all inspired by the first images I took of the tatty Audi and how great they turned out.

Actually, the low sunlight I harnessed in those first images is something I’ve only made use of once again since, and even then I couldn’t get the angle to get that lovely glow to the same degree. These next couple of images were taken at a local classic car meet I went to – I think the filter added something to the mix, but whilst it added a little bit more atmosphere to those images, I’d had more luck elsewhere where I’d been in more of a mind to tell a story, rather than just take snaps, so to speak. 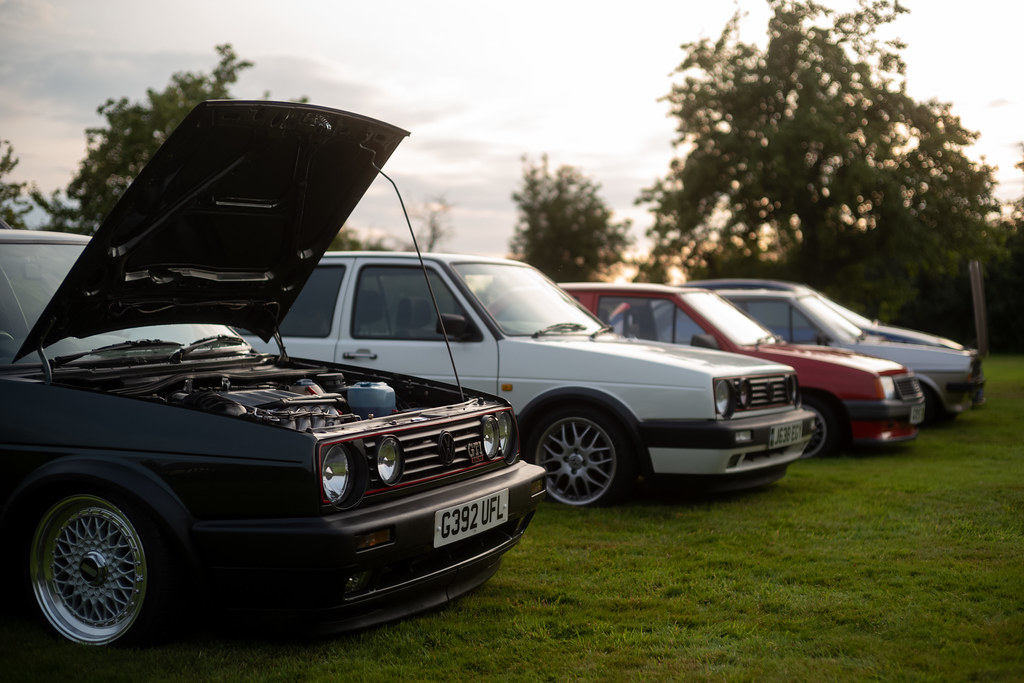 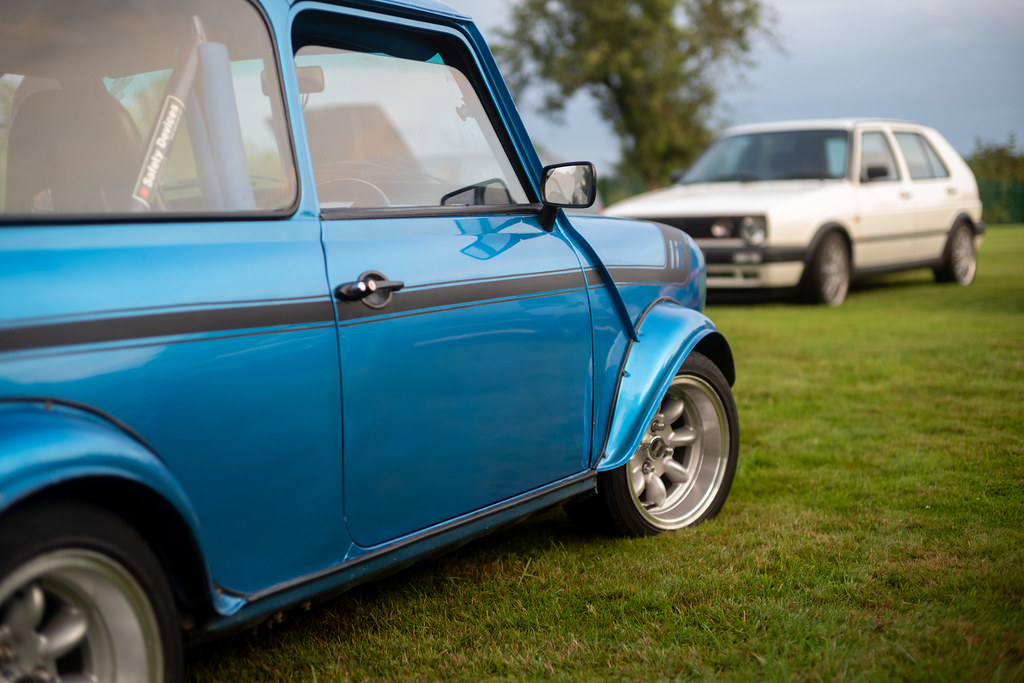 The place I’ve used this lens and filter combination to the best effect so far is in a classic car workshop owned by a company called Majestic Motors that’s been doing a little bit of body work for me. These guys run their operation out of a slightly rustic workshop on a countryside industrial estate not far from Kenilworth. The workshop and type of cars they usually work on (read: more posh than my Golf) make for a wonderful environment to photograph in. It’s also the perfect environment for enhancing atmosphere with the Tiffen filter and ZM Sonnar. It’s not obvious in all the images, but in images where I catch a bit of a light source or reflection in some shiny metal I think it really works. 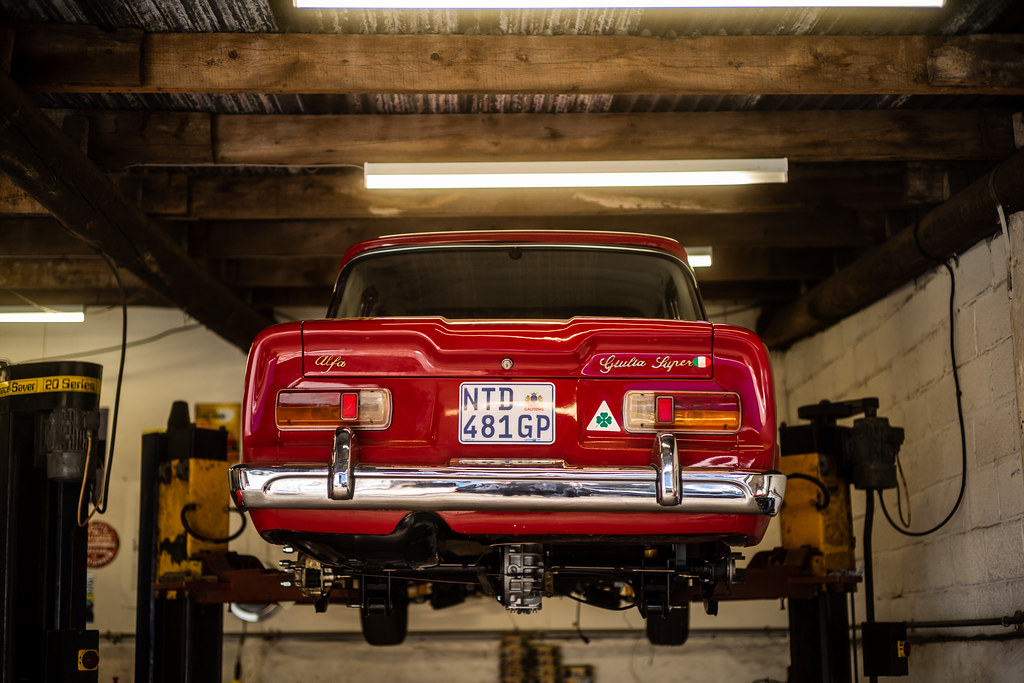 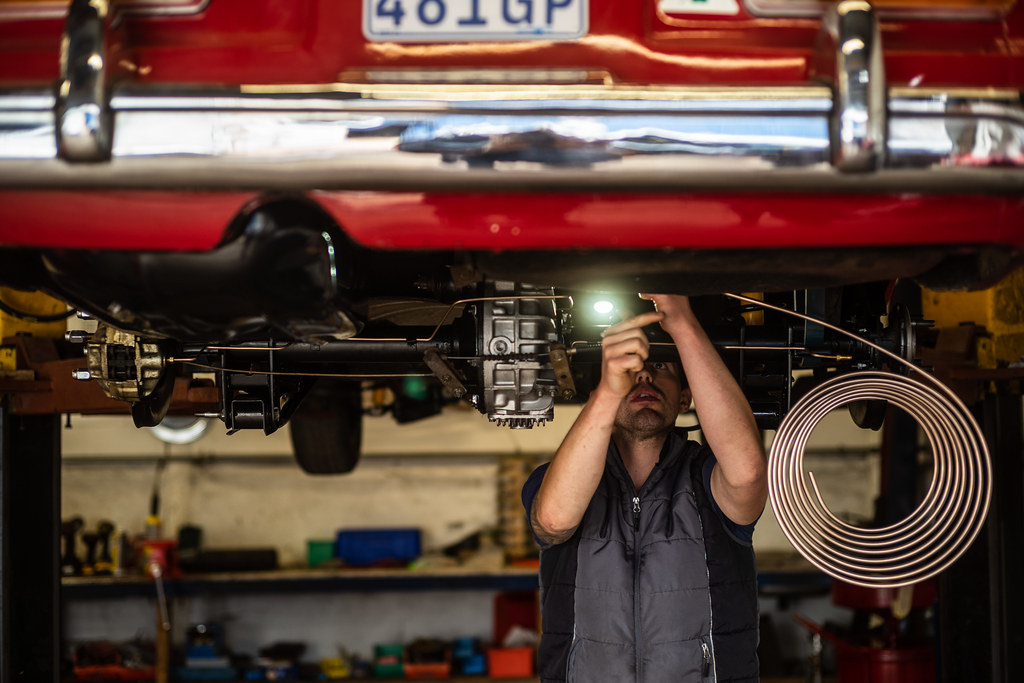 And even when it’s less obvious, I still feel like the filter adds a little something to the character of the images – but maybe I’m just convincing myself of that…? 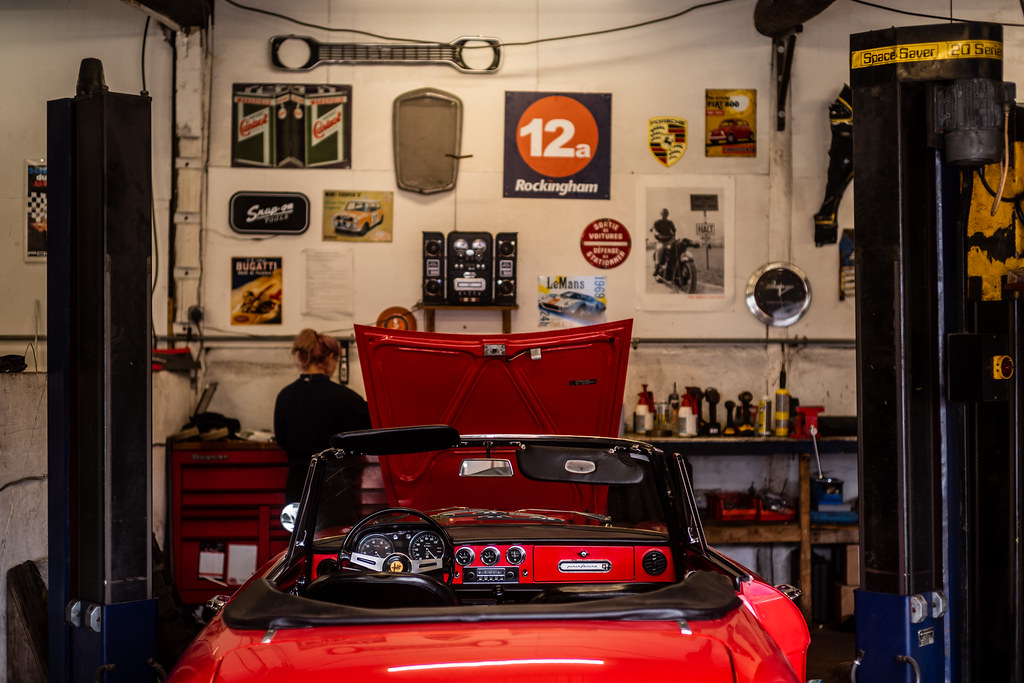 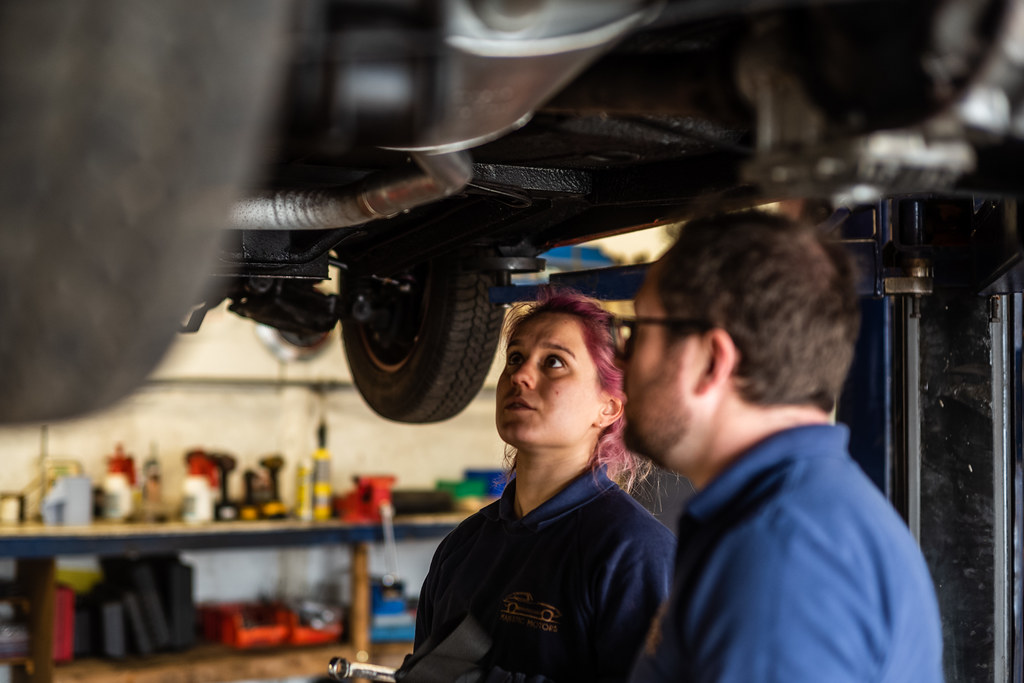 One way or another, I think there is a reason these a lot of these images work so well for me. As I’ve alluded, whenever I go there, I feel like there is a story to tell. I always enjoy taking photos in places of work – especially ones like this. The other shots I’ve taken with this lens have perhaps had something of the atmosphere enhanced, but there isn’t as much of a story within the images. What works within the Majestic Motors images for me is the look the filter produces enhances the atmosphere, which in turn helps to tell the story. 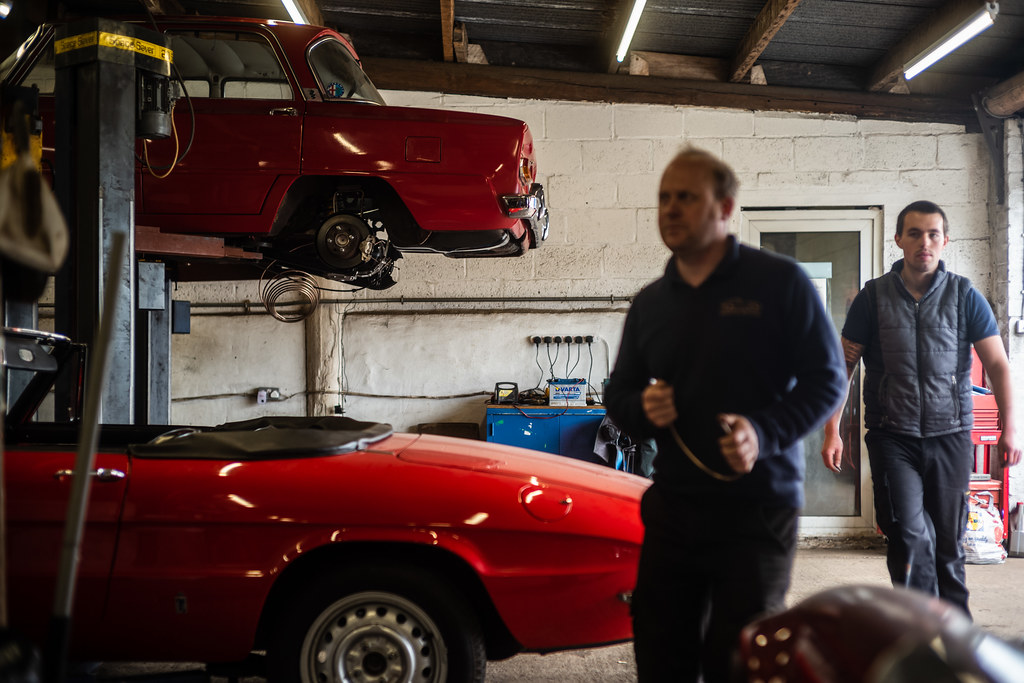 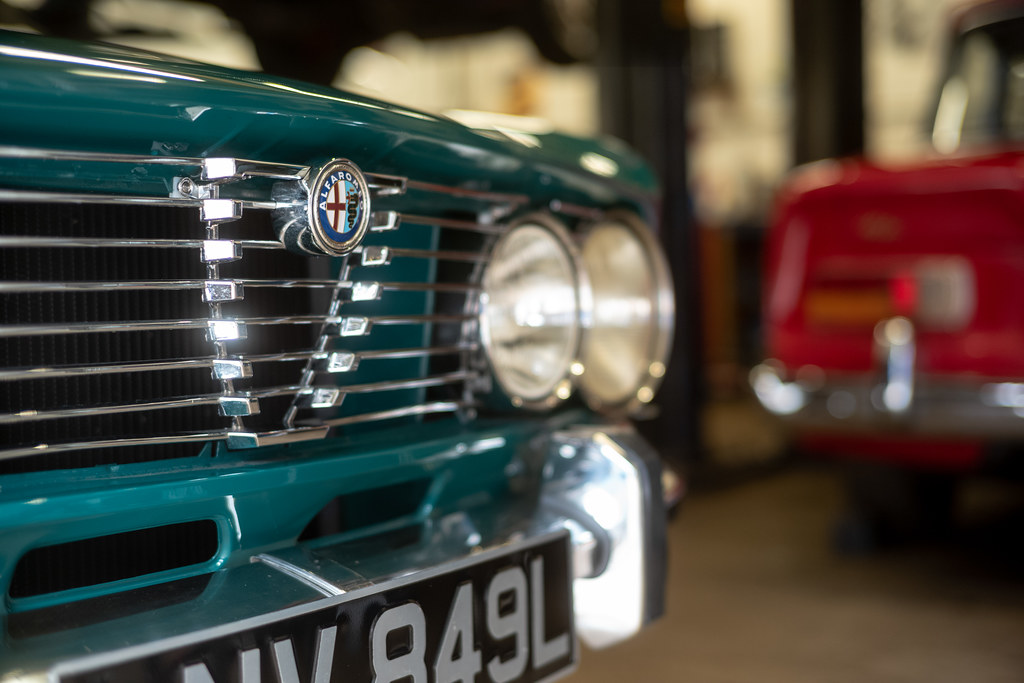 I was given reason to reflect on this talking to Alex Nelson as part of this interview. We talked about how in cinema lenses are harnessed to help tell a story. In photography, that’s quite often the case too, but when I see people using filters like this one, photographers often say they do so with a desire to make their images look more “cinematic”. Since talking to Alex, and shooting with this filter, I feel like I can’t quite pin down what people mean when they say that. Do they mean they are trying to create images that look like movie stills, or does it mean they are trying ways to make their images tell the story more readily through the choices they make to create images that have a certain look?

I’m sure that the answer to that question varies from one photographer to the next. Regardless of the answer though, there’s no doubt in my mind that mounting black pro most filter on to a ZM Sonnar does wonders for enhancing the sense of atmosphere within images. And so far in my experiences with it, when the goal is to tell the story of a place that has an tangible atmosphere of its own, enhancing it with this lens and filter combination works really well to help tell that story!