This Leica 21mm f/3.4 Super-Angulon is the second bit of kit I’ve borrowed from London Camera Exchange (my local camera shop in Worcester) recently. Gareth, the manager there, asked me recently if I’d like to borrow the odd bit of kit in return for helping to promote the fact that they have quite a lot of used film photography kit in the shop these days. Not one to turn down such a generous offer, I started by picking some fairly expensive kit to try out…

The first bit of kit I borrowed was a Contax RTS, but I haven’t got through the roll in that yet, so in the meanwhile I thought it only sensible to borrow this 21mm. Of course, because of its high value, I wasn’t entirely comfortable with having it for too long, so I just took it out for a few quick snaps mounted on the digital M10-P.

To be honest, I didn’t have particularly high hopes for it working all that well on the digital rangefinder, but guessed I could learn enough about it to share some insight, as well as perhaps shedding a little light on the pitfalls and benefits of mounting the likes of these older symmetrical wide angle lens designs on modern Leica digital cameras.

I’d actually been quite intrigued by this lens when it first landed in the shop. Gareth let me know it had come in the same day it landed, so I made a special effort to go and have a look at it. I’m not massively into shooting wide angle lenses, nor am I particularly into the more elderly glass when I do. For me, wide angle photography needs a bit more “pop” so I tend to prefer more modern glass.

That being said, this doesn’t preclude me from having an interest in kit like this. When this sort of thing appears in a camera shop that’s only a short walk from my work, I find it hard not to go and have a grope, which is usually followed by me doing a little bit of online reading to make sure I’m not missing something by letting it slip through my fingers. As it turns out, the Leica 21mm f/3.4 Super-Angulon is not the sort of lens that suits my style or shooting desires, but I should insist that this is no indication of it being anything other than a cracking bit of glass. Many of the accounts I can find online say it has quite a lot going for it – especially on film – and is certainly not without a couple of fairly interesting character traits!

The Leica 21mm f/3.4 Super-Angulon lens was designed and manufactured for Leica by Schneider, and was brought to market in 1963. It is a symmetrical optical formula meaning that a large chunk of the glass pokes into the body of the camera. This of course means that the lens body itself is slightly smaller than some more modern equivalents. The result of this is a lens that’s arguably easier to carry, but perhaps does suffer ever so slightly in terms of its ergonomics. Though, being fair to it, the infinity lock focus tab is probably one of the nicest to use I’ve come across. As far as I can gather, this was the second iteration of 21mm lens that Leica marketed, with the first being an f/4 version. The earlier f/4 version was a touch smaller and had a 9 bladed aperture. The later version I played with is apparently a little larger with an unusual 4 bladed aperture, but supposedly has improved optics. Ken Rockwell goes into much more detail in his useful 21mm Leica lens comparison page here.

However good or otherwise the optics are, it goes without saying that the Leica 21mm f/3.4 Super-Angulon was brought to market way before the invention of digital, and even before Leica rangefinders had through-the-lens light meters. This is evidenced by the fact that the design of the lens is such that a fair chunk of it pokes into the body of the camera – so much so that I left a little uncomfortable initially mounting it. In reality, of course, it mounts perfectly to the M10-P in the same way it would an M4-P. Though it’s possibly worth noting here that reading this page, it seems only certain later versions of this lens were designed to be used with the M5 and CL – two cameras that have the fold out light meter stalks that can be damaged by lenses with rear optics that protrude into the body of the camera. The version I borrowed is an earlier one without the cutout so would not be mountable to those cameras.

In actual fact, provided it’s a later copy of the Leica 21mm f/3.4 Super-Angulon, the CL and M5 are the only film Leica cameras that will take a through-the-lens meter reading with these lenses. Leica cameras that take a meter reading from light reflected off the shutter blinds inside the camera don’t work because the lens projects so far into the camera, it interferes with the light meter reading. I discovered this trying to take a test shot or two outside London camera exchange. Fortunately, the M10-P also has live view which meters off the sensor instead. Despite the camera being pointed toward the sky on AE, it still overexposed.

Of course, once mounted on a digital there are a couple of other issues that come along with using a lens like this. Sadly, the light path from the Leica 21mm f/3.4 Super-Angulon is too great for it to be used without some colour shift toward the edges of the frame. There will also be some reduction in sharpness into the corners on digital compared to with film too. Reading reviews, it’s seems like this lens is slightly softer into the corners on film too, it also vignettes when wider-open. Both of these traits will definitely be more apparent on digital, again due to the angle of the light hitting the sensor.

As you’ll see moment, since I had a strong feeling all this would be the case, my end goal was a couple of black and white conversions, specifically so the colour shift wouldn’t be a problem for me. Though, having done a bit of reading about this lens, I found this post that demonstrates how to use the gradient feature to locally shift the colour balance in Lightroom to correct the colour shift on the earlier f/4 version. I was quite surprised how well this worked actually – It’s not perfect, but it worked ok and could probably be improved further with more time and a couple of localised adjustments. Thankfully, the use of modern technology with the Leica 21mm f/3.4 Super-Angulon wasn’t entirely resultant in disaster. As well as providing accurate metering, live view is a feature that brings other advantages when shooting with a lens like this. For a start, it allows for more accurate framing than can be achieved with an accessory finder, but as well as this, it makes taking advantage of the 0.4m close-focusing this lens offers much easier – especially with the added advantages being able to zoom in to check focus and focus peaking bring to the table. That being said, I should acknowledge here that thanks to the Leica 21mm f/3.4 Super-Angulon being a lower-contrast lens, focus peaking can sometimes be a little less effective than when used with modern glass. As is also very nicely demonstrated in this post, these early Super-Anuglon formula lenses are lower-contrast than the modern designs. This is really quite evident in the results on that website as well as being visible in my out of camera shots above. Though, as that reviewer says, this might mean that sharpness is perceptibly lower, but in reality, the resolution is evident if you closely inspect the files. The result of this is that the contrast can be added in post quite successfully if you like your images to have a bit more “bite”. In fact Lightroom’s latest “texture” feature, seems pretty bloody good for quickly and easily enhancing perceptible details when shooting lenses like this.

Finally, if there’s one thing I haven’t adequately demonstrated in my test images it’s the lack of distortion this lens brings to the table. I did a quick test myself using the door frame of the camera shop, and could see looking through the viewfinder that the levels of distortion were quite low. This is something quite prized in wide angle lenses, but with modern more complicated retrofocus designs can sometimes be an issue. These more elderly symmetrical designs are inherently less prone to such issues.

A couple of final images

As I said, I didn’t have long with the Leica 21mm f/3.4 Super-Angulon, and in the end only managed 3 shots I was happy to share – not least because it started chucking down with rain about 5 minutes after I parked up to take these. They have all been converted to black & white in Lightroom, have had the contrast tweaked globally as well as on the finer details using a combination of sharpening, clarity and texture features. 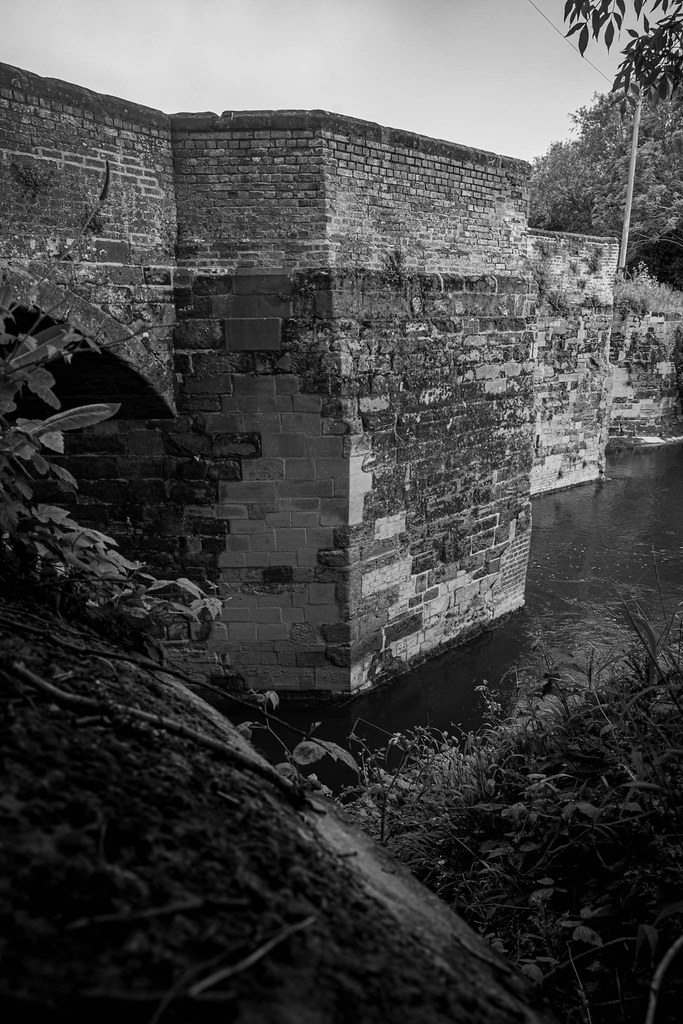 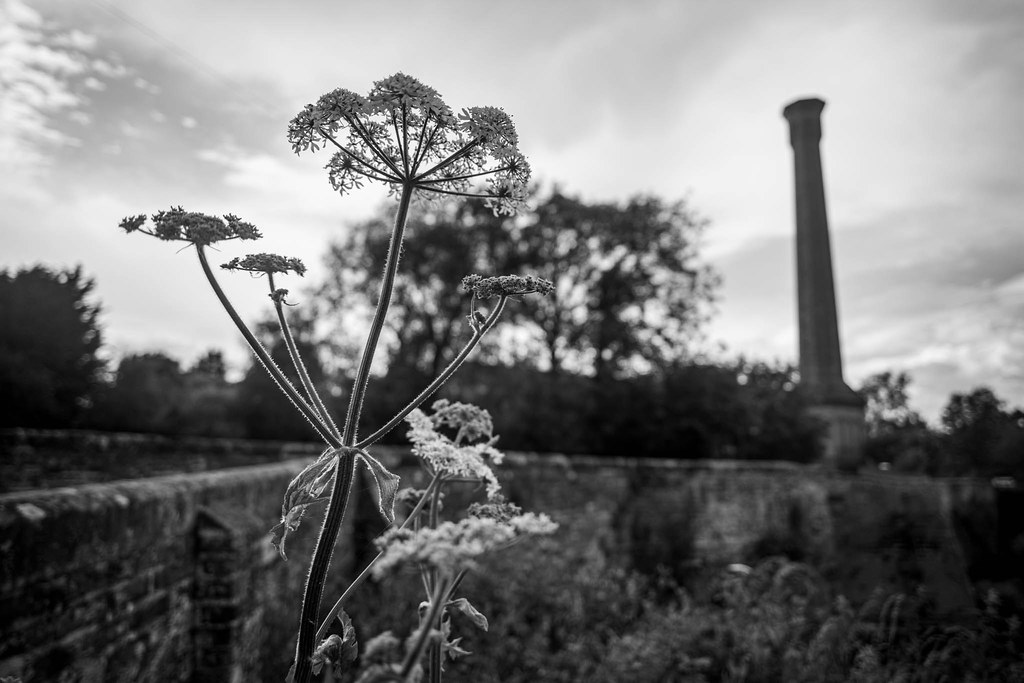 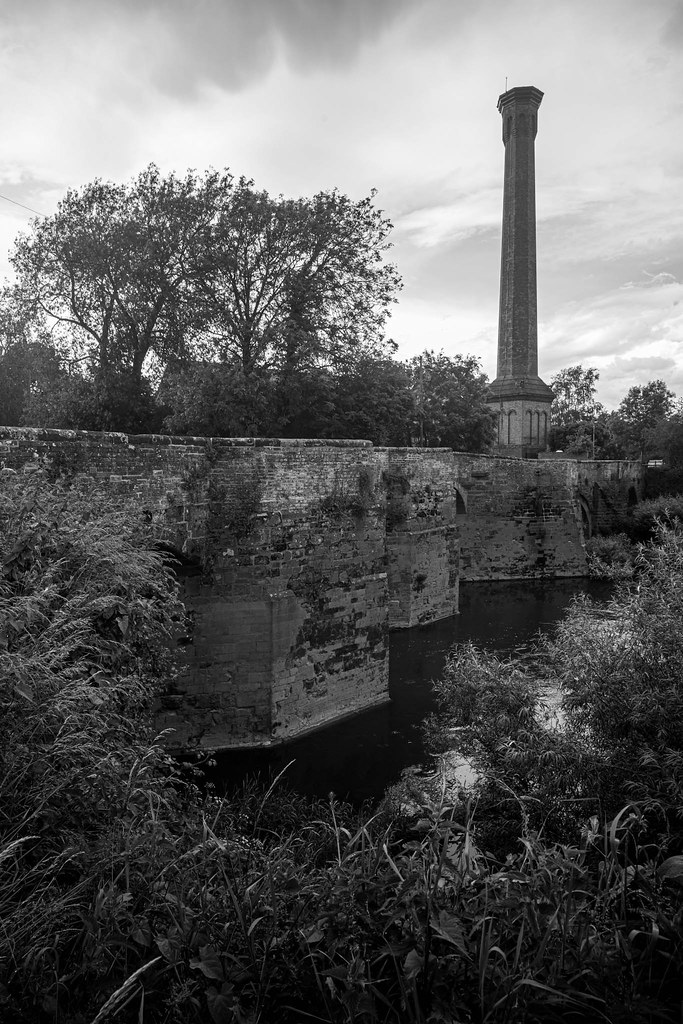 Whilst these images have turned out ok with a little post-process, it’s probably quite evident that I have had to force the Leica 21mm f/3.4 Super-Angulon into being fit for the purpose of shooting on digital. In reality, it really would be much better suited to being shot on the sort of film camera it was designed for. I’ve had to solve the problems that are caused by shooting it on a digital metered camera, and thanks to a broader preference for high-contrast glass, I’ve had to tweak my results to get the sort of wide-angle images I prefer.

That said, if you’re a film shooter, have a preference for for lower-contrast glass with good resolution, you shoot with an unmetered rangefinder, and you’re looking for something a little wider, then – provided you’ve got the cash needed to buy Leica glass – you might find what you’re looking for with the Leica 21mm f/3.4 Super-Angulon.

If you want to see some more images taken with this lens, there is a flickr group here – there’s quite a few film shots in there, but I found a couple of photographers’ images to show off a few of the lens’s optical traits quite nicely – for b&w images have a look here and colour images, here.

This lens was kindly loaned to me for 24hrs by London Camera Exchange in Worcester to help highlight their growing stock of analogue photography gear – if you want to explore their list of used gear you can find a lot of it on their website here, and if you are interested in this lens specifically, then Gareth has said to give them a call at the Worcester branch and ask for the “Hamish price”