I have a crush on these compact Minolta cameras manufactured in the 1960s. If one only looked at the price tag of these models they could be just crap. But actually they are complex and sometimes luxurious pieces of engineering.

As a mostly fixed lens compact user (not much SLR-ing, here) these cameras are right up my alley. The design, I must admit, is a major starting point for my interest. Then the fact that they are grounded in the hugely saturated and competitive market of fixed lens consumer cameras which dominated the 1960s, that boosted innovation and clever ideas (Green Button!). That environment produced these actually very diverse cameras in the span of just a few years. Also the lenses have a good reputation for producing high quality exposures, which goes for all Minolta’s different camera series.

As you can see from the choice of photos illustrating this post I take huge pleasure in documenting the life of my daughter and other family and friends. I could never muster it schlepping along an intimidating brick of a DSLR with tele-lens. That would spoil any intimate or curious situation.

The largest (actually, only by a few millimeters) is the AL-F. (The Canonet QL17 GIII is just about the same size.) It has shutter priority exposure as a default setting, and is powered by a common Weincell 1,35v battery. The camera chooses aperture depending on which shutter time you choose, unless for flash where the aperture is based on the GN value of choice. The lens is a Minolta Rokkor 1:2.7 38 mm. I’ve never had an issue focusing this camera, and the focus throw is very short which I appreciate a lot. 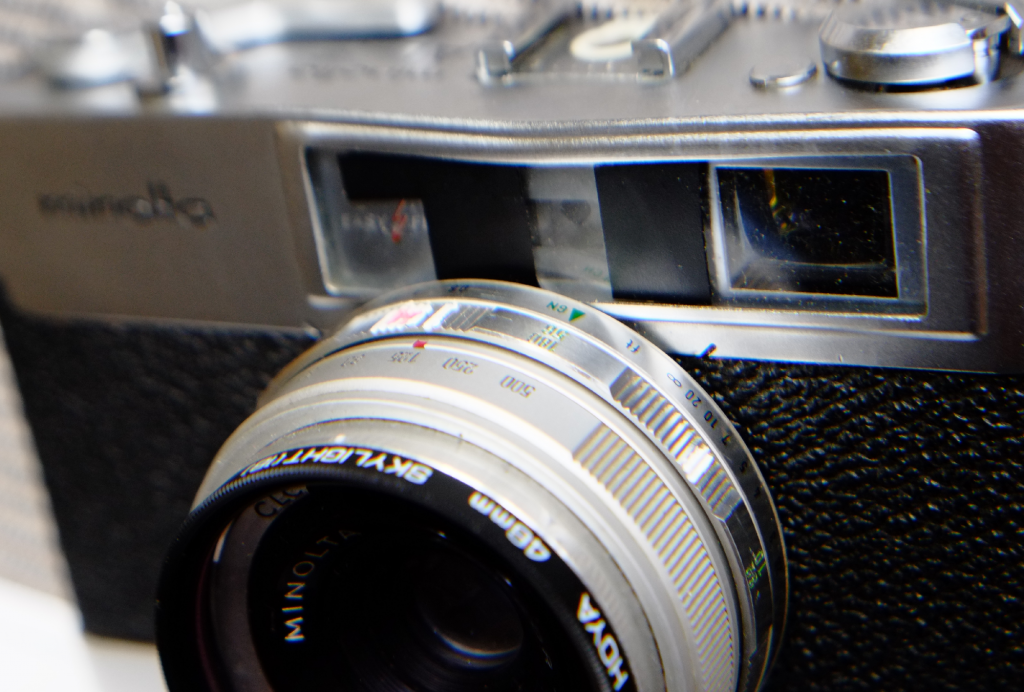 As you can see the profile of my specimen isn’t straight. Someone’s either closed a car door on it or did something drastic with a flash still in the socket. Or both.

Anyway. I found it in a flea market and since focusing and exposure were correct I bought it. It was my first rangefinder camera (after my Olympus XA). As I got home I found out that it won’t work with a battery, so has a default aperture of f/2.7. I won’t use it in direct sunlight but in other conditions with a 200 ASA colour film pictures don’t come out over exposed. In fact, when the light is low, if I want to expose at aperture 4 I can set the GN value at 56 (m). Then the camera will only expose at 1/30th of a second in default flash mode. 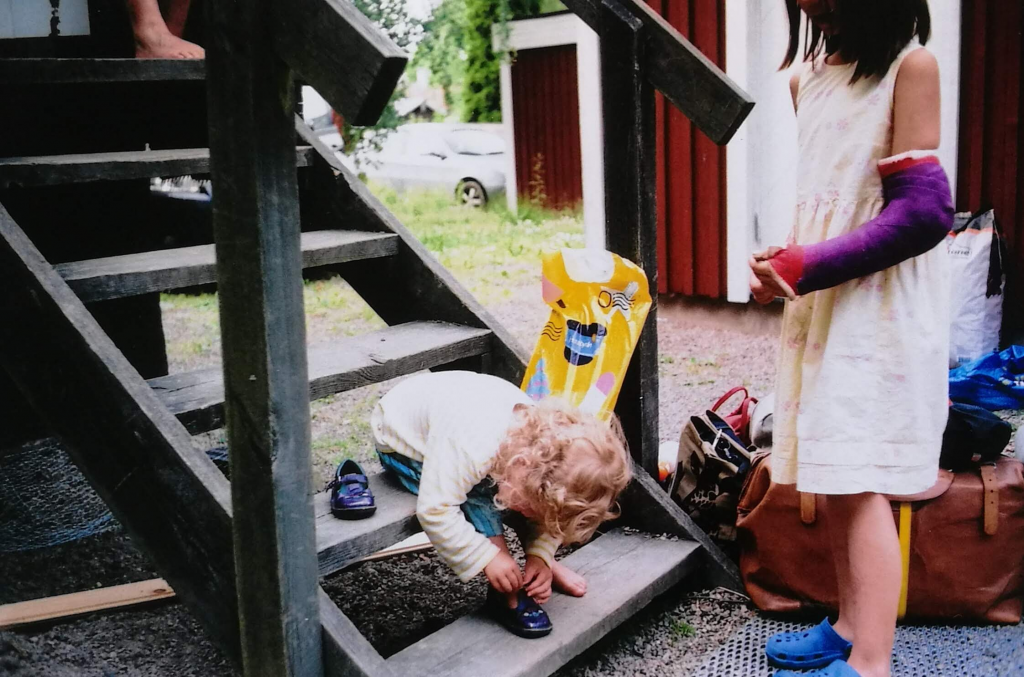 I used the AL-F as my main camera for close to a year and was never disappointed in the pictures I got. Mostly it was family snaps outdoors, and some landscapes. The 38 mm lens is a focal length that I’m very used to due to my extensive use of single use cameras and my XA (35 mm focal). Today I’ve changed my mind and prefer 50 to 75-ish mm lenses but in search of photographs with some context around the main subject the 35-40 mm range is very comfortable. I don’t think it’s a coincidence that Minolta’s excursion into Leica’s M system (with the CL and CLA cameras) had them introduce the ‘odd’ focal range 40 mm lenses to the M-mount rangefinder cameras. Minolta had a specific idea about an ‘ideal’ focal range for consumer cameras. In conclusion my AL-F is a somewhat limited but still flexible compact with a great lens. 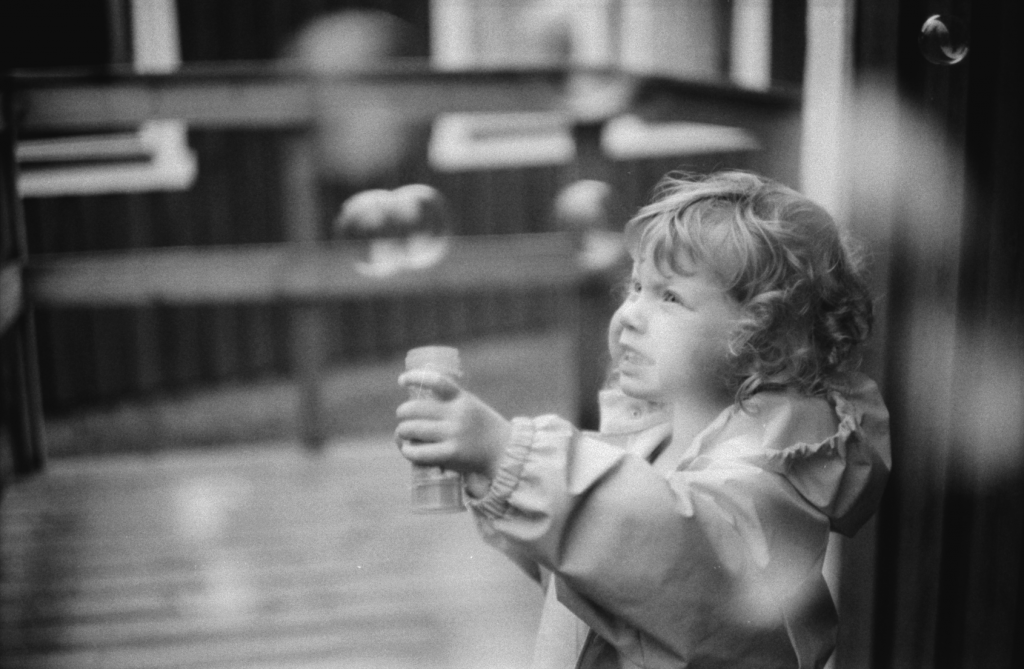 Another flea market find was the Minolta Minoltina-P. It sports another 38 mm Rokkor lens. The camera is distinctly smaller than the AL-F, but weighs as much. It feels much more compact and less flimsy and has an exclusive feel even. The lens is very short so the camera fits in a jeans pocket. 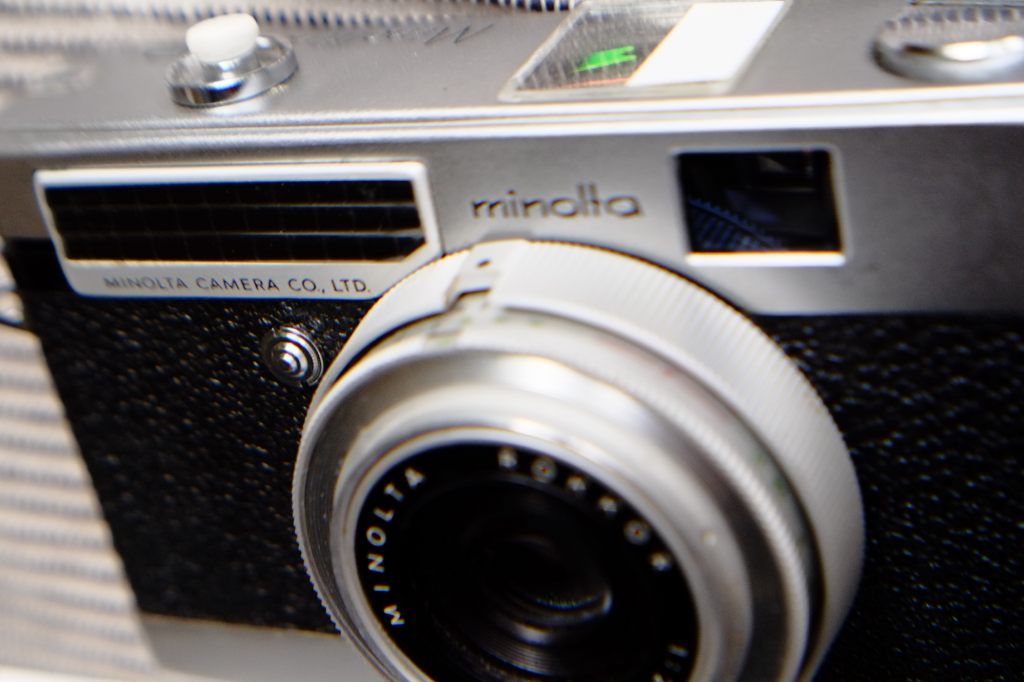 The exposure system is based on EV-values and a selenium powered exposure meter. On the top of the camera there is a window where you align a green marker with the red one which indicates the exposure reading. You move the green marker by turning the EV marked ring on the lens. For flash mode the shutter time is 1/30th of a second. Focusing is easy with click stops in the common positions, that are also indicated with symbols in the same window as exposure. The distance is also visible on the lens. The focusing throw is comfortably short. It does not have a rangefinder, I forgot to say. The window on top takes care of it all, though. There you can see indicators for distance and exposure settings. After viewing that one has only to put one’s eye to the finder and compose the picture.

In conclusion: I’m very fond of using the Minotina-P. Its size is a huge factor for bringing it along. And it’s a very intuitive set-up. I’ve gotten many great pictures photographing with it.

I love it! It has a pop-out lens! And a GREEN BUTTON! Like the Minoltina-P it is a zone focus camera. But unlike the P all you need is visible in the viewfinder. Far down the right corner there is a small window which displays the chosen zone focus symbol on the lens. And on the right side the chosen aperture is also indicated. You can choose to lock the indicated aperture by half pressing the shutter release. As for shutter time there are two settings indicated on the lens: ‘Sunny’ or ‘cloudy’. You can also choose a flash setting with a locked time at 1/30th and some aperture variety using the GN settings. I’m guessing the two standard symbols stand for 1/250th and 1/60th of a second respectively. The light meter is best powered by a Weincell 1,35 v battery. The camera body is the same size as the compact Minoltina-P, but a slight bit thicker. And with the lens retracted it’s the same thickness making it fit in a jeans pocket.

The black section of the body is made of plastic. It does not, however, reduce the fact that the weight of the camera makes it feel sturdy and un-flimsy. The plastic does make me afraid that I might crack it with too tight a grip sometimes. So I use a half-case most of the time. Taking pictures with the Hi-Matic C is a joy. I love the choice of only two(!) exposure times combined with the aperture lock. That makes me a very active photographer, while still being aided by the camera. And there is a Green Button!

This one I longed for. It’s rather rare, and finding one moderately priced took some time. It’s ever so slightly smaller than the AL-F but is much more stylish in the design. It is fully manually controlled with the aid of the selenium light meter, indicated on the top of the body. Like on all these cameras the viewfinder is big and bright, and like on the AL-F the focusing patch is very visible and easy to use. The lens is a much better 1:1.8 Rokkor-QF with a commendably short focus throw. I would say that this camera is an equal to the Canonet QL 17 GIII but without the auto shutter choice. Of smaller size it’s still a hefty brick and has the advantage of a solar powered exposure indicator. Unfortunately no exposure information is indicated in the viewfinder. I’m only on my second roll with the S, but so far it’s unequalled among the similar rangefinders of the same era that I’ve used (Yashicas, Canonets, Olympus (this is the era before the RC)). These are great cameras that I will not part with even though these days I am more intent on exploring the world of consumer level M39 mount rangefinders. When – not in an experimental mindset – I need a reliable camera which is compact and sporting a wide angle lens one of these four Minoltas is a given. These cameras were among the top tier in the consumer camera market in the 1960s. It’s no wonder that they still work and their design is the inspiration for modern digital consumer cameras. Kodak Retina 118 – More Than a Camera – By Lisa Murphy