The other day, we decided to go for a day trip to the beach. In Worcester where I live, the closest beaches are on the Bristol Channel in Somerset – so that’s exactly where we went.

Despite this relative close proximity, we’ve never been to Brean sands. We’ve been to Burnham-on-Sea, a bigger town just down the channel, and I’ve been to Weston-Super-Mare just up around the other side of Brean Down when I was a kid, but never Brean Sands itself. We’ve talked about it a lot of times, but with it being 90 miles away, it mostly seems just a little bit too far to spontaneously travel to when the the primary goal is really just to take the dogs for a walk.

Unfortunately, “dogs” plural, became “dog” singular just recently when we had to have our Whippet-cross-Lab Piglet put down. In hindsight, we realised she had been getting more and more ill since early summer, but it was only when she had an unusual autoimmune issue 6 or so weeks ago that she went downhill very quickly. It was, as I’m sure you can imagine, very sad and distressing process to go through.

Having gone through something so traumatic as a family, we decided to do something nice together. And now, with only having one dog to shut in the boot of of the car for a 180 mile round trip, we decided a day out to the beach would blow the cobwebs out a bit. It was, of course, a little sad only having Murphy with us. Though, on the bright side, he was a lot better behaved than he used to be when he had Piglet to give him the confidence he needed to chase other people’s dogs. He’s also getting on a bit himself, so for the most part he just trotted around near us. 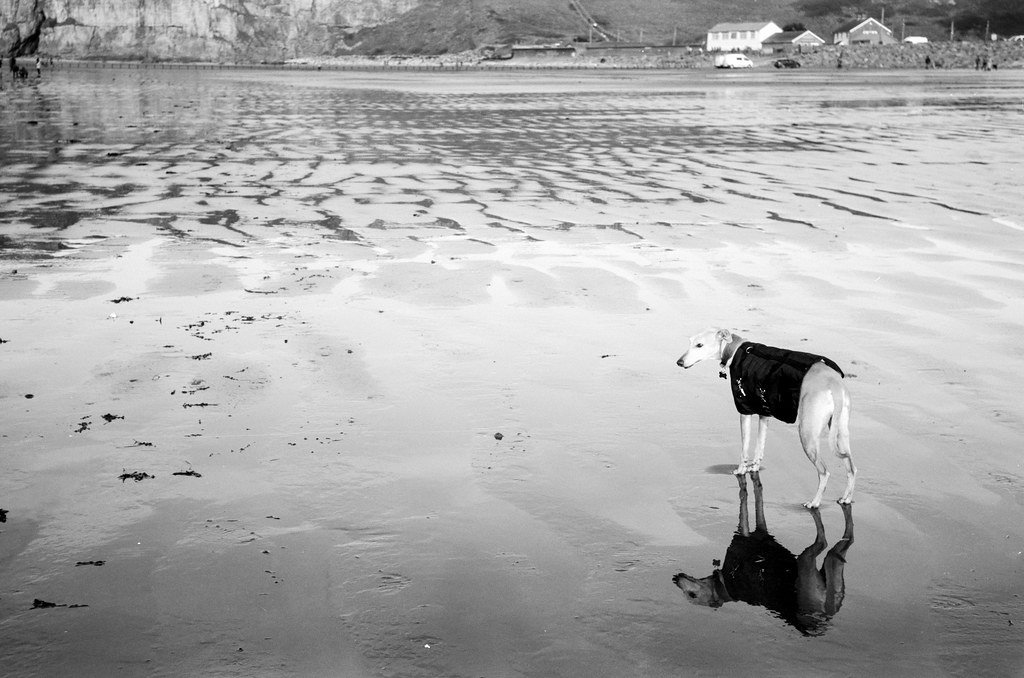 Being a winter’s day, the beach was pretty much deserted. There was a few people around, but thankfully – especially with all the covid stuff going on – it was quiet enough that we felt we had the space we needed to enjoy ourselves as a family by ourselves. We were also really lucky in that we had a bit of hazy sunshine, and despite the time of year it was actually quite mild.

Amusingly, the girls – especially Norah – couldn’t quite get their heads around going to the beach and it not being warm and Sunny. The day before, and on the journey down, we had lots of questions about going for a paddle in the sea. I laid it out in very simple terms a fair few times that the aim was simply to go for a walk on the beach, maybe write our names in the sand, and if they were lucky (and good), get a hot chocolate from somewhere to warm them up afterwards.

This obviously went in one ear and straight out the other, as despite finding some sticks for some name writing, they ignored my advice not to go too close to the water and had their shoes, socks and trousers soaked through within minutes. In fact, Connie managed to fall over backwards as a wave surrounded her soaking the bum of her trousers and most of her coat. 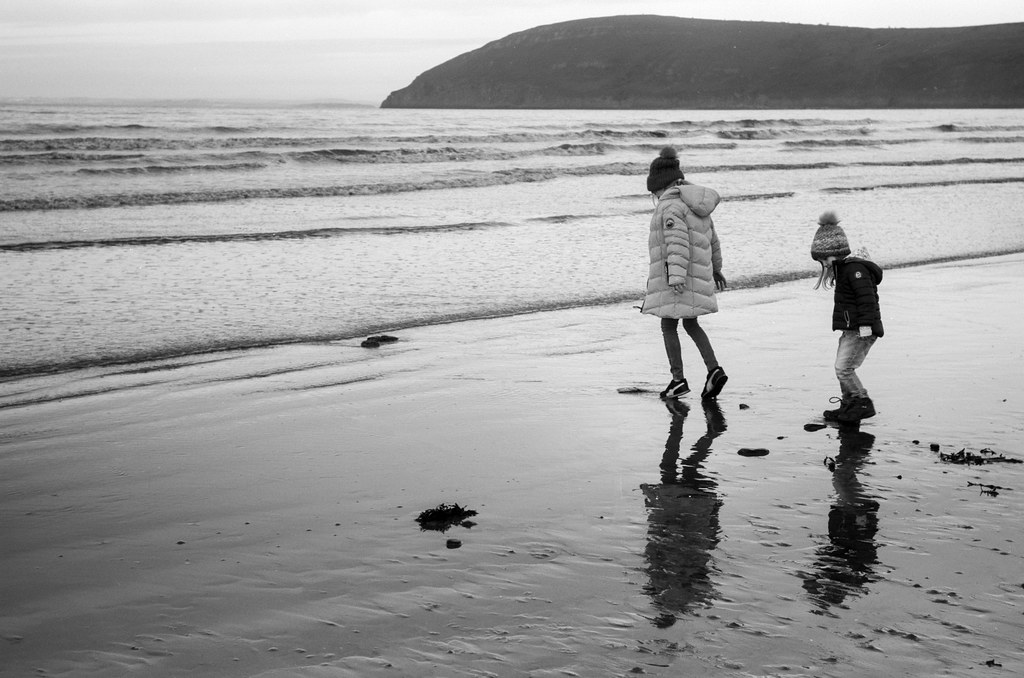 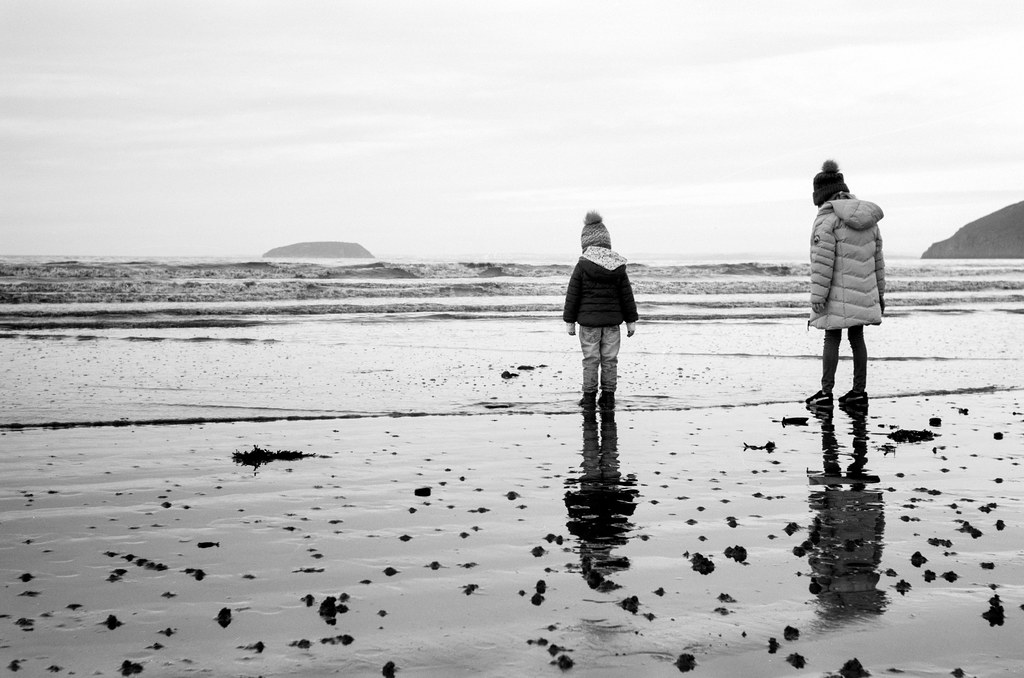 Fortunately, she saw the funny side (as did we). And, as I’ve said, it was quite mild. So after trekking back up the beach to dump her wet coat in the car, we carried on down the beach. And since they were already wet, I worried myself a little less about their proximity to the water. 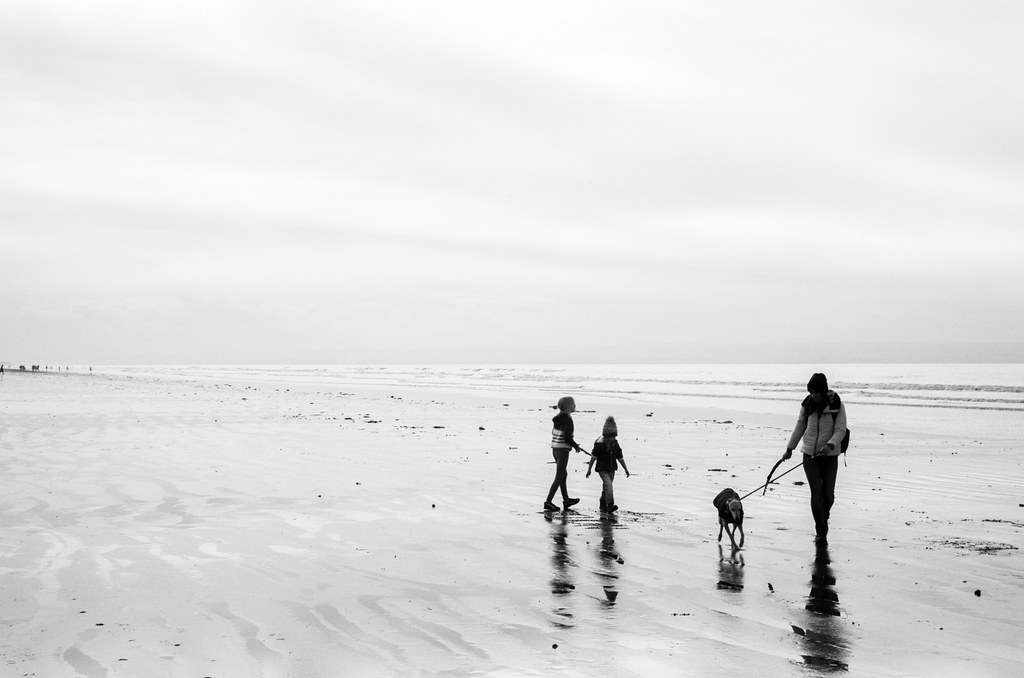 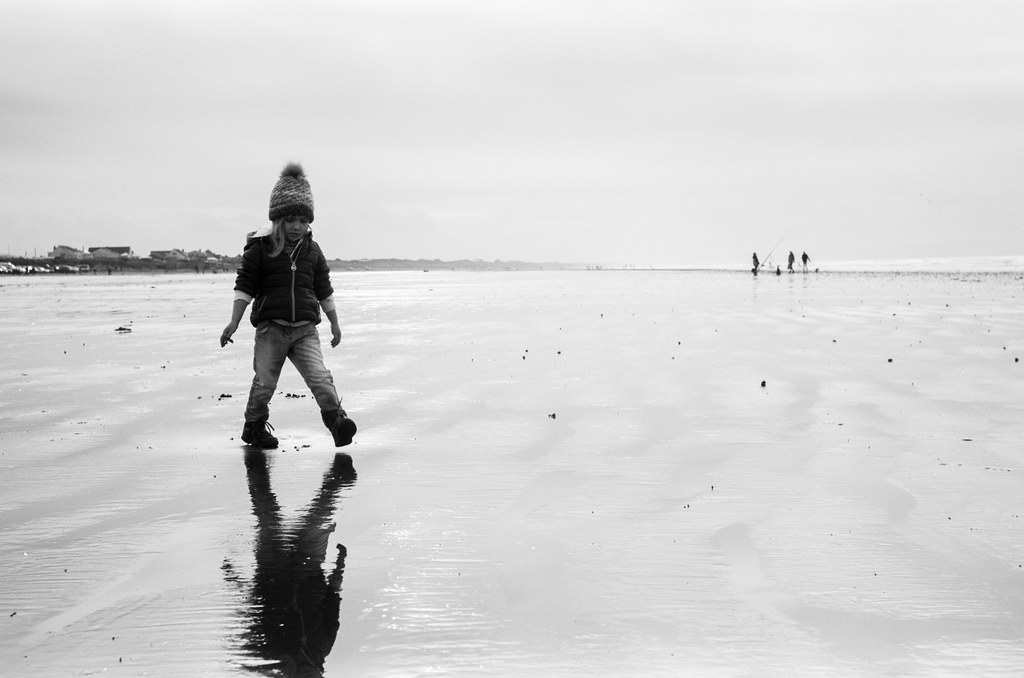 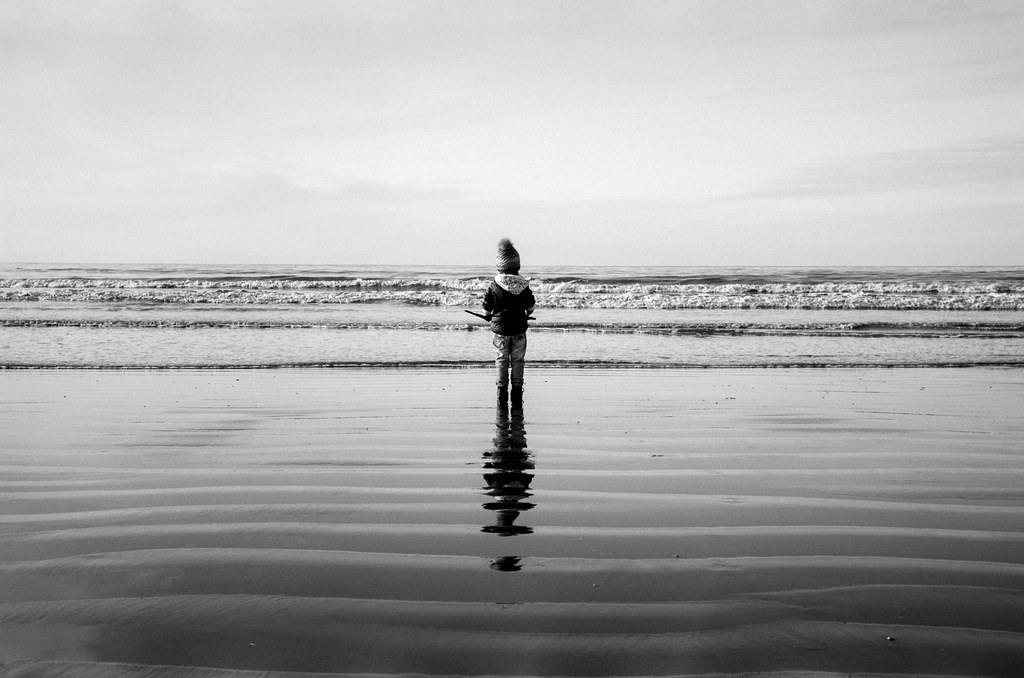 From where we parked the car on the sand, we then took a very slow walk all the way down to the cliffs of Brean Down. I’ve talked before about how much I enjoy taking photos on the Beach. I usually shoot colour, but in the winter black & white feels more appropriate somehow. Shooting around the few people there were on the beach, I managed to get a few of the sorts of shots of the coastline I like taking. 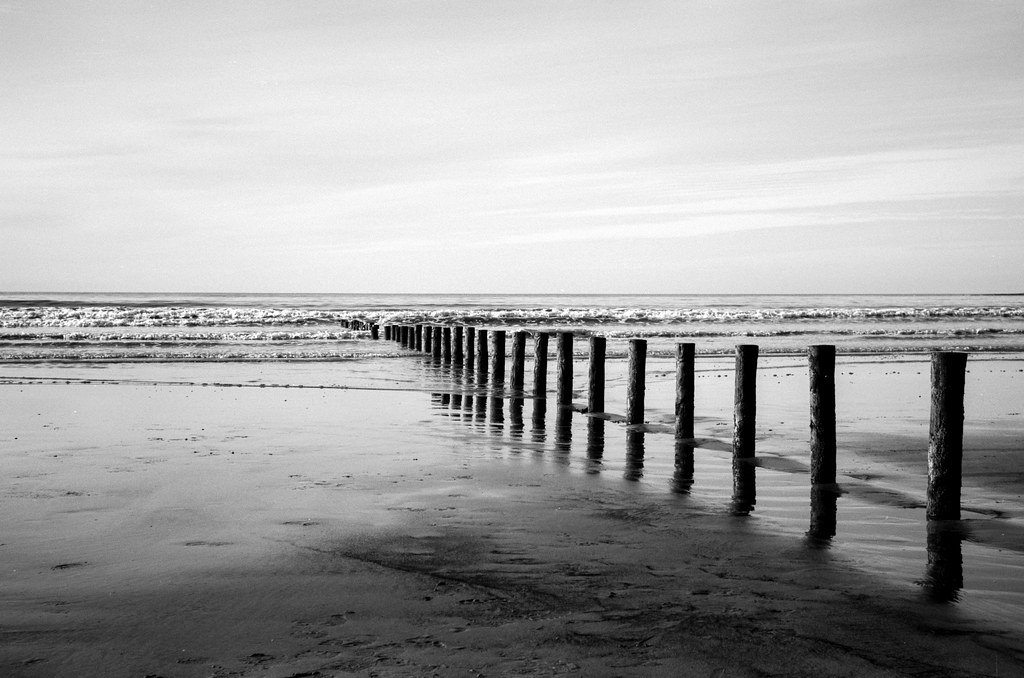 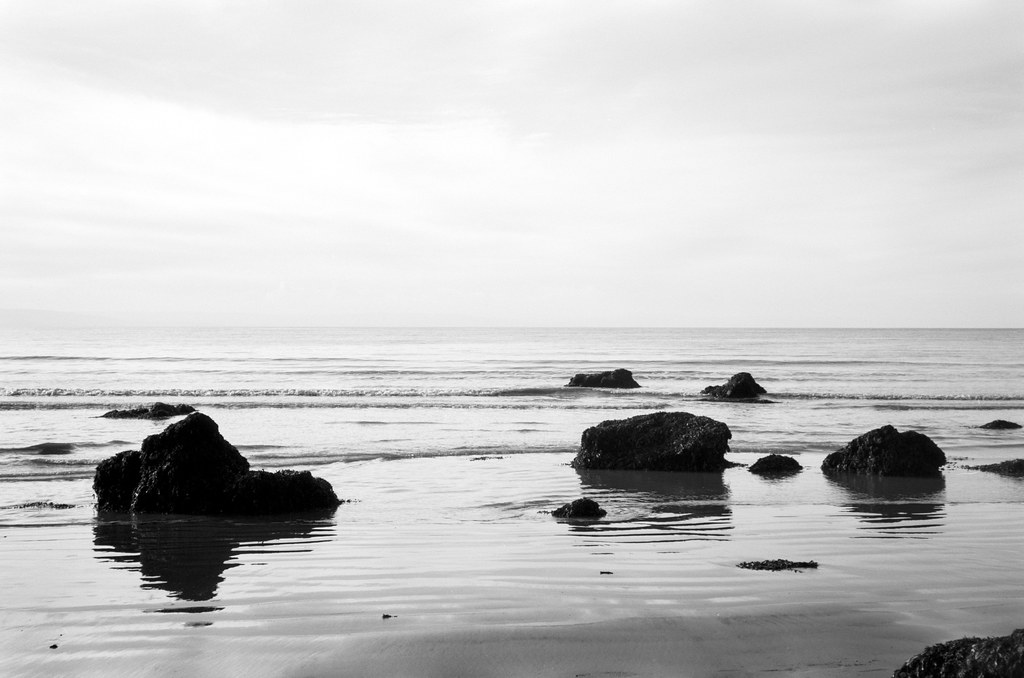 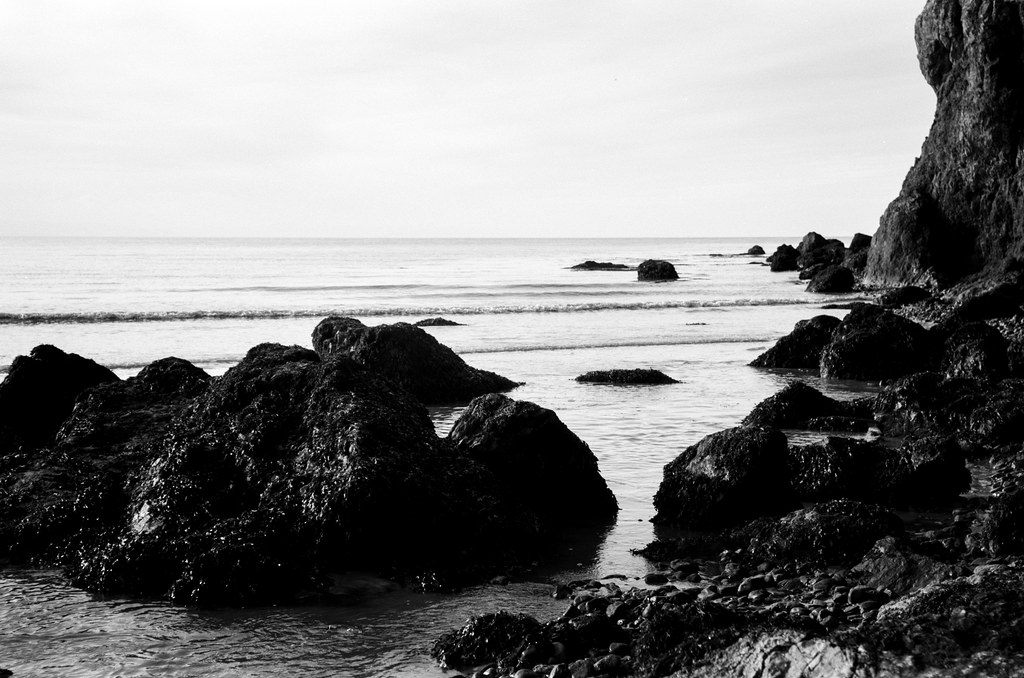 And a couple of some seaside accommodation 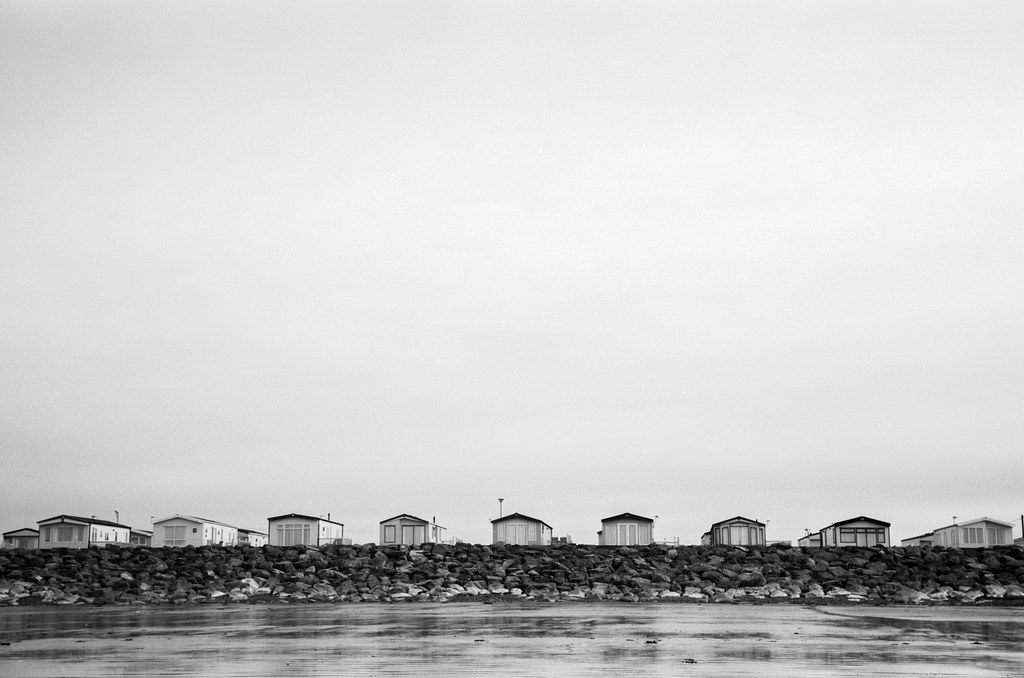 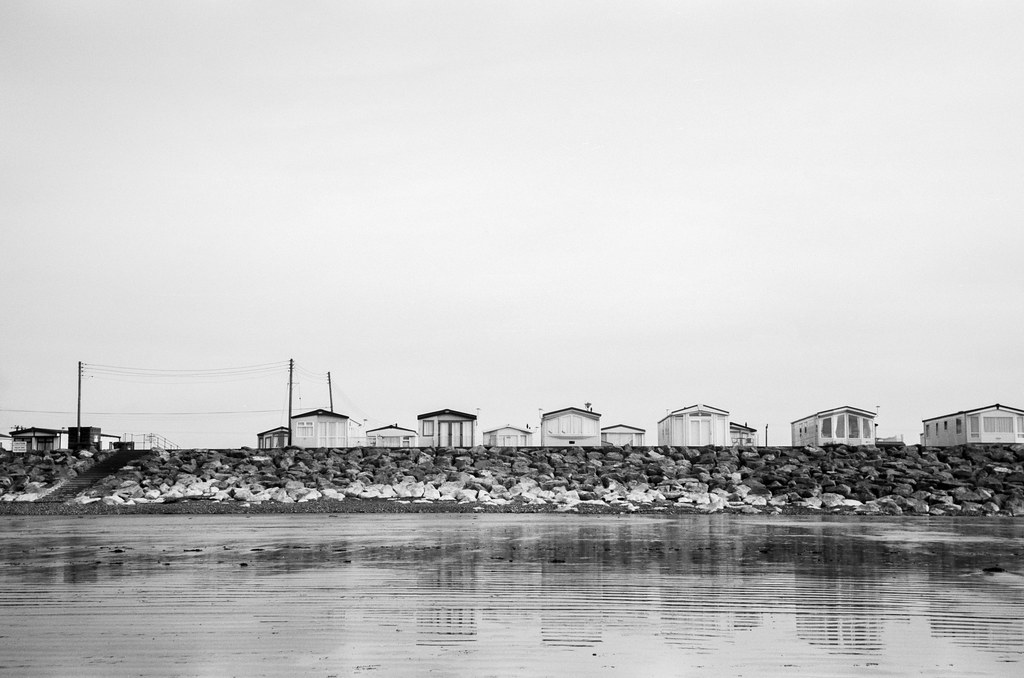 Once we got to the cliffs the girls clambered around on the rocks for a bit. I remember doing this as a kid and being told to be careful more often than I felt it necessary to be told – of course I was being careful, and I never hurt myself. But, remembering this didn’t stop me nagging the girls to be careful as they scaled the craggy boulders. Though, me being me, once they had stopped moving I took the opportunity to get a couple of snaps of them. 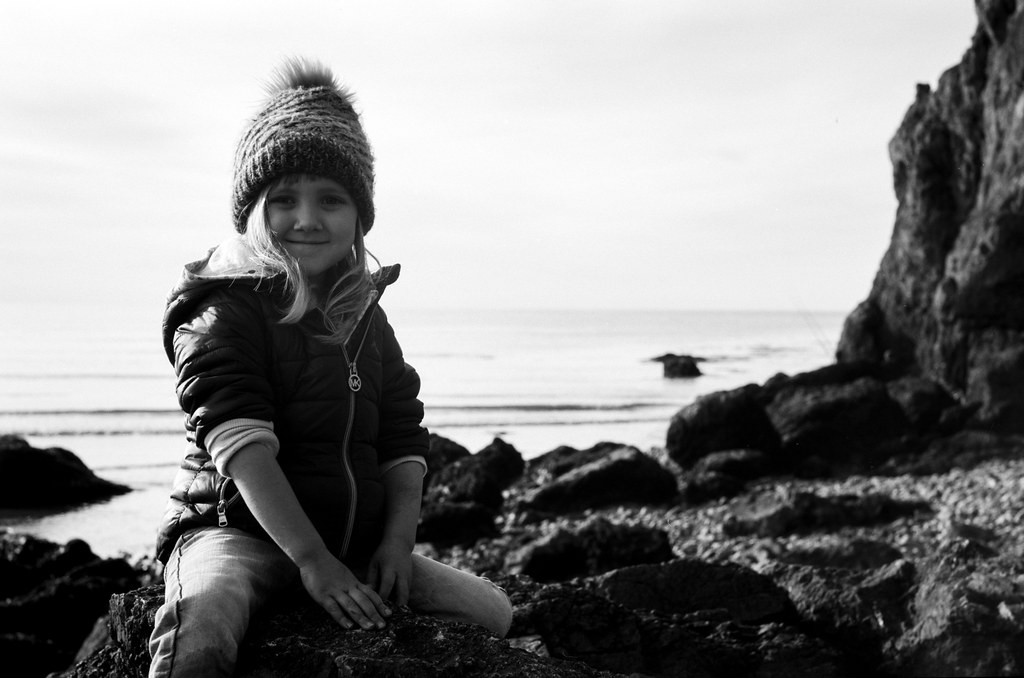 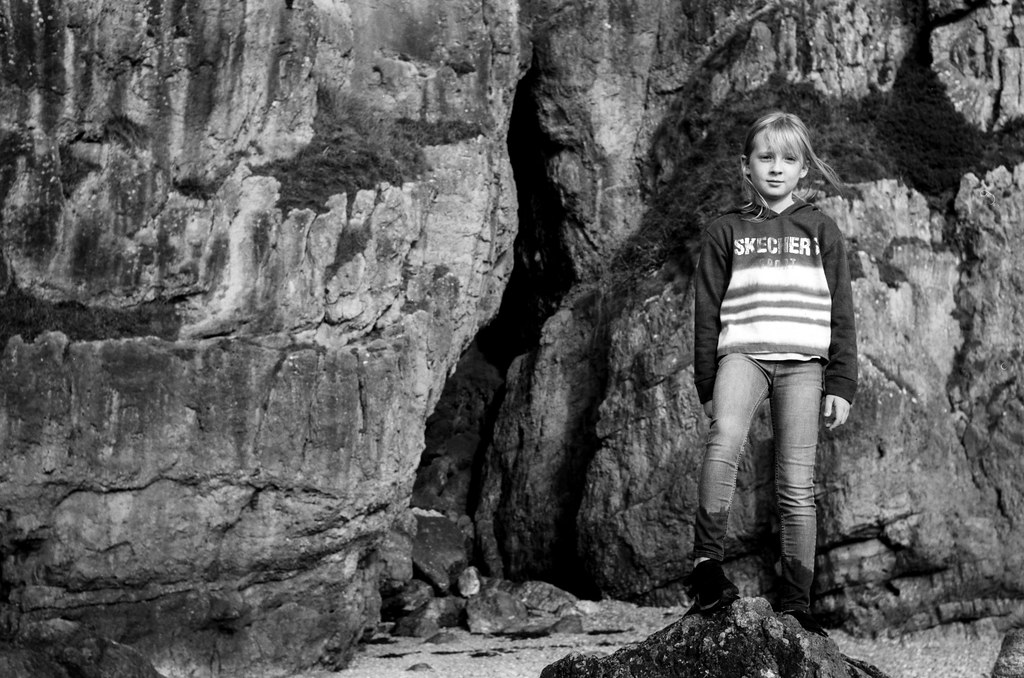 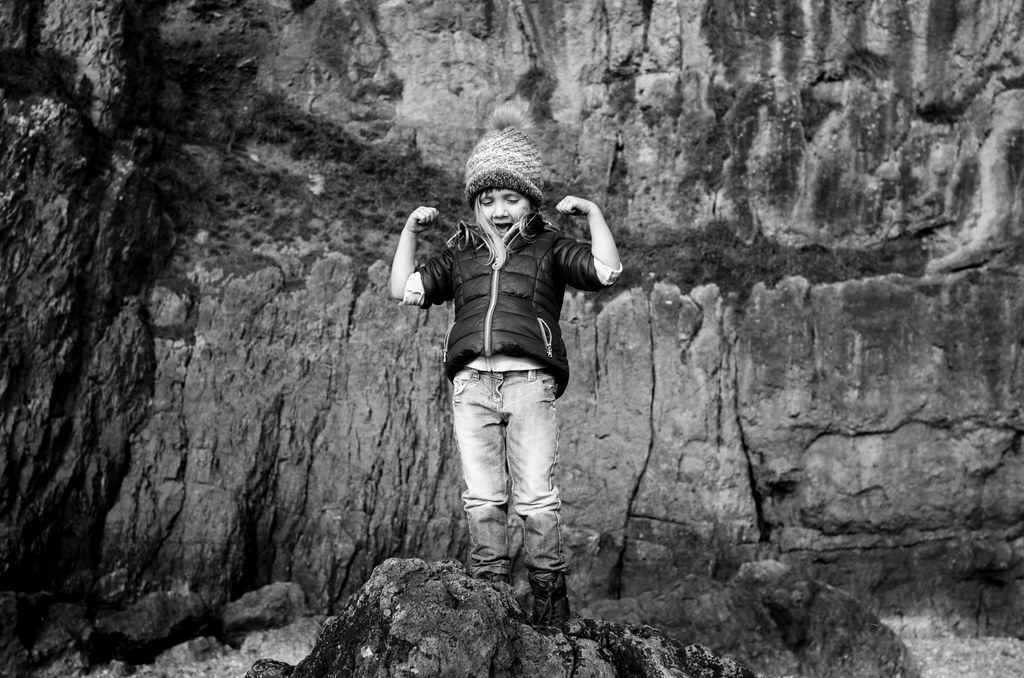 Having somehow lost over an hour on the walk to the cliffs, we made the trip back a little quicker (I carried Norah for about half of it). This next shot was the last I took – I now have it set as the home screen on my phone. 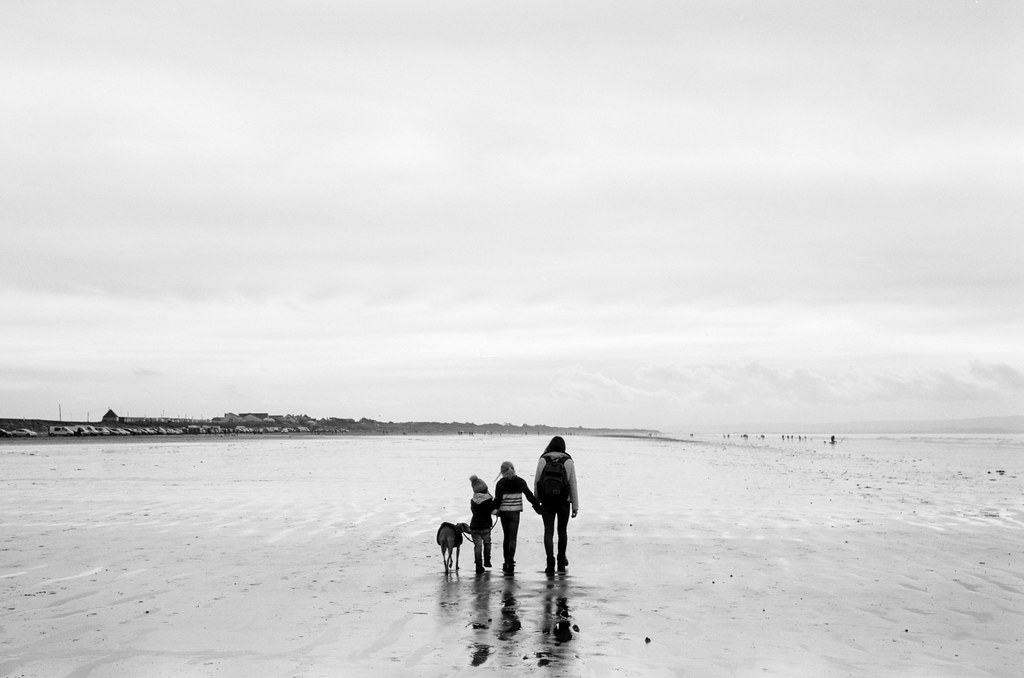 The camera of choice was my Leica M4-P with newly acquired KameraKraft grip and a Skyllaney rehoused pre-war uncoated Zeiss 50mm f/1.5 Sonnar – both lens and grip will be the subject of articles another day, so I won’t go on too much about them now, other than to say how happy I am with them! The film was a roll of Kosmo Foto Mono 100. At this stage, I feel like I should also apologise to Steve from Kosmo Foto. He sent me a roll to shoot a couple of years ago and I never got round to it. A few months ago, I finally loaded it into one of my Pentaxes, and then something (Norah) happened and most of it ended up outside of the camera and on the floor of the living room. That wasn’t to be end end of it though – I mentioned this to Steve and he suggested he should send me one of his fancy gift boxes. I obviously snapped his hand off! I’m pleased I did too! The roll was developed by Silverpan Film Lab in Xtol 1+1 at 24 degrees for 5:20 in his Jobo, and the results here are only very slightly tweaked in Lightroom from Duncan’s Flextight scans. Duncan suggested using the Flextight to scan rather than the Noritsu as I thinks he gets better results with black & white. He also tweaked the contrast down a bit – I told him when we first started working together that I like my scans to give me a bit of post-process wriggle room, so he just does this as a matter of course for me these days.

Despite his tweaks, the natural tonality of the film was still there I think. For the most part my job in Lightroom was just correcting the odd wonky horizon, some slight tweaks to exposure and a little boost to contrast. Apart from that, what you see is pretty much what I got back from the lab. I’m absolutely over the moon with the tonality of them too – they are just what I had in mind when I was taking the photos!

I’m also really happy with the amount of grain. I’d read a few reviews that talk about “comically high grain” which made me worry that I wouldn’t like the results, but actually – as someone who rarely shoots films that are any faster than 400 – I really like the look of the results. There is a little bit of grain, for sure, but Duncan’s dev & scan skills must have calmed it, as to me, it add’s little more than a slight texture. Perhaps I just like a bit of grain?! Either way, I shall definitely be shooting more Kosmo Foto Mono 100 – thanks Steve!!

I shall also being taking another trip to Brean Sands – The beach, fresh air, time with the family and a chance to shoot a whole roll of film in a camera I love… all nicely rounded off with some photos I am really happy with that Hannah loves too. Yeah, it was a good day – and just what we as a family needed! A quick 3 frames of Kodak Aerochrome – By Mike Caputo Ma Baker – Behind the scenes at a local bakery Breaking a Rut With A Return To Film - By Chris Ledda