I live in San Francisco, California and like many cities around the world at this point in time, we’re in the midst of a shelter in place order meant to combat the Coronavirus pandemic. Like many city dwellers here, I live in a tiny studio apartment that can truly test the boundaries of one’s sanity when one is forced to shelter in place for weeks at a time. To combat the ever-present cabin fever symptoms, I’ve made it a point to go on solo photo walks and document the empty scenes of a city on hold.

For this “5 frames with” article I want to focus on a particular camera and film combination: my Rolleiflex 3.5F medium format TLR camera and Ilford XP2 film.

If you ask anyone who knows me you’ll know that the average time for a camera to remain in my collection is somewhere between 4-6 months. Call it Gear Aquisition Syndrome, a fear of commitment, or a short attention span, but I just love trying the myriad film cameras available and I only have the money to keep so many cameras at a given time. That said, the Rolleiflex is a truly special camera and one I hope to keep (for at least 8 months). Known for its incredibly sharp lens (my particular model is equipped with a 75mm f/3.5 Zeiss Planar), minimal weight, and insanely quiet shutter this is one of the few medium format cameras that work in both the studio and on the street (See Richard Avedon and Vivian Maier, respectively). Seriously, the noiseless leaf shutter puts any Leica to shame and allows for shutter speeds as slow as 1/15th of a second while handheld!

When it comes to my subjects I generally focus on architecture, urban landscapes, and abstract patterns. For me, photography is a way to stay connected with San Francisco and show others the beauty of both the well-known parts of the city as well as the lesser-known nooks and crannies. Given the subjects that I photograph, I also prefer the resolution and dynamic range of medium format and the abstract and austere nature of black and white film.

The shots you’re seeing below were taken on the first roll of Ilford XP2 I’ve ever shot. Ilford XP2 is a chromogenic black and white film and, for those of you unfamiliar with what that entails, it just means that XP2 is meant to be developed in C41 chemistry normally used for color film. Besides the obvious benefits of being able to drop off this film at any lab (which isn’t always possible with proper black and white film) as well as the ability to develop side-by-side with color negative film, one of the real joys of Ilford XP2 is the lack of variables that come into play in development. Admittedly, while I love the range of experimentation that you can do with true B&W film with different developers and alternative processes like stand development – which is my go-to method for developing low-speed B&W film – I also like that when it comes to XP2, I can set the ISO anywhere from 200-800 and simply develop normally in C41 chemistry without needing to worry about extending developing times or using different agitation schemes. This consistency leaves less room for error and produces, well, consistent results.

Overall, I really enjoy this film, especially for daytime photography, when I need to get as much highlight detail as possible. Whereas I’d usually use an orange filter with Kodak TMax 100 or Fuji Acros to resolve detail in the sky, with XP2 it comes naturally without needing to worry about things like filter factor. Also, I love how clinically sharp this film is without being too grainy. Would I use it instead of a traditional B&W film? Probably not, as I get a lot of enjoyment out of the variables involved in B&W processing. But as a general-purpose, convenient film, XP2 does it all.

And as for the Rolleiflex? While I can’t predict how long this camera will stay in my collection I can certainly say that it is the best medium format camera I’ve ever owned (and I’ve owned a Yashica MAT-124G, a Fuji GW690, and a Hasselblad 500c/m). It’s light enough for street photography and travel and has one of the sharpest lenses I’ve ever used. While these cameras are far from cheap, you can still get a fully serviced model for under $800, and considering that that price includes the attached lens, it’s still a better deal than a Leica. Anyway, enough talk, enjoy the photos! 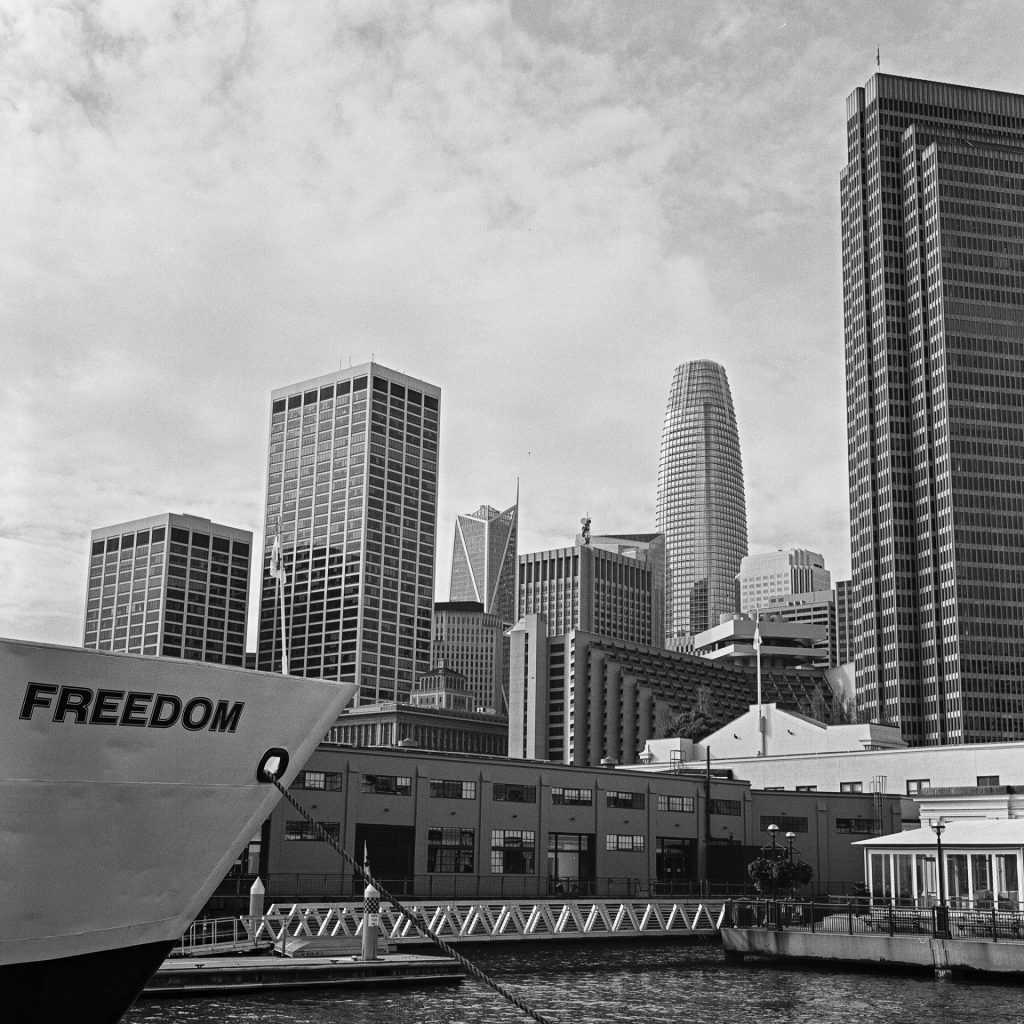 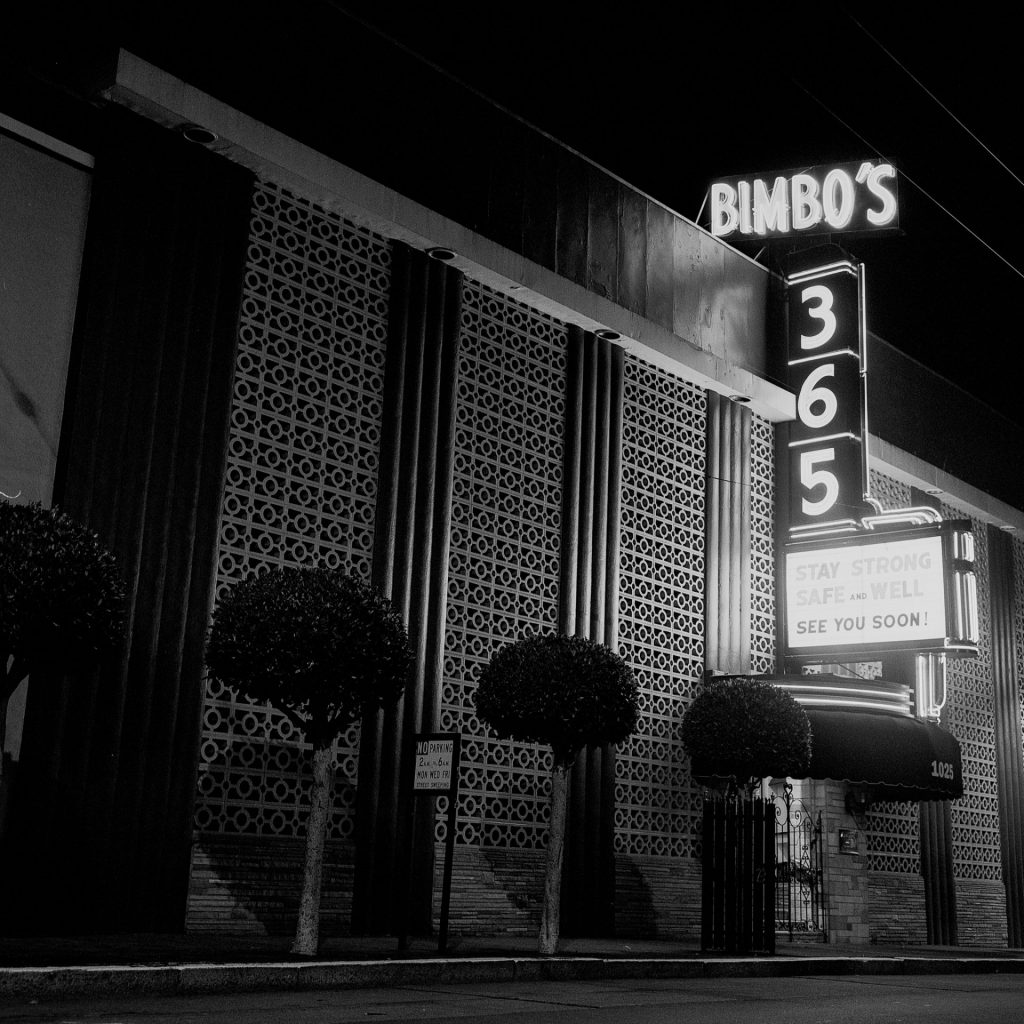 Looking up at the Westin Saint Francis in Union Square An art exhibit down by San Francisco’s Ferry Building