I bought this Minolta AFZ just yesterday afternoon. First impressions were positive, but then I discovered the fatal weakness that will forevermore relegate a camera to my shelf… It lacks a mode/button to switch the flash off.

This has happened a few times, I’ve picked up a camera, been attracted to some feature or another, but have then discovered some other feature (or lack thereof) that has meant I’m just not interested in going through the process of shooting it. I always I end up in two minds. The first option seems to be to force a roll through, dislike the experience, and write a scathing review.

The second, which has always seemed a little more fair on the poor chunk of (usually 1980’s/90’s) plastic is to just chuck the thing in a box or on a shelf at work until I get sick enough of the site of it to just give it away.

Today, it’s occurred to me there is a third option. I could just write about why I don’t want to put a roll through it… Of course that alone would make a pretty short post…

“This is the Minolta AFZ, it doesn’t have a flash off switch. Cheers for reading, Hamish”

But then, there’s usually a few other observations I can make, and maybe I can find a photo or two Flickr or whatever to link to…?? Still unsure, I asked on instagram for people’s thought on the usefulness of such a post. Some negative response, but many just said words to the affect of “crack on, some will find it useful”

Of course, for all its faults social media can quite often brings outcomes that are different to those that were expected. In this case it was an offer from someone on Instagram to share with me a few of their pictures taken with this camera. As such, I now have a fourth option. I can write about a camera I haven’t shot with, share my thoughts on the functions and use photos supplied by readers of the blog. People are two quick to diss social media, for me it comes good way more often than than bad!

So anyway, here we are, a review of a camera I’ve not shot with… … Perhaps I should just call it a “mini review” of the Minolta AFZ. Hopefully there’s still enough here to be going on with if you’ve just bought one of these for £2 from a car boot sale like I’ve just done. There are a few cameras that Minolta AFZ produced with the prefix of ‘AF’ in the name. The most notable of these is the Minolta AF-C. The AF-C is a well regarded point & shoot camera that looks a little like a piece of shit point & shoot camera. I have for a long time been convinced that I’m going to find one of these in a charity shop or at a car boot. So much so that today when I saw “Minolta” on the front of a crappy mostly disintegrated faux leather case, for one split second I had a glimmer of hope.

Unfortunately is was not to be. I opened the case and found within it something that was only separated by one letter, the Minolta AFZ. It was also dead, it had a battery in it, but it did little more than blink a little ‘0’ on the screen on the top. I bought it nonetheless. It was the first camera I’d seen all day that even had a fixed focal length lens, and the condition otherwise wasn’t bad. There was also a little bit of me that wondered (hoped) it would also have the same 35mm f/2.8 lens that’s contained within the lauded AF-C.

Sadly, if camera-wiki.org is to be believed, the AFZ has a 4 element lens rather than the 6 element lens contained in the AF-C. Does this mean its bad, no of course it doesn’t, I can think of a fair few awesome 4 element 35mm f/2.8 lenses, but it does mean its also not the secret to getting AF-C photos for significantly less money than an AF-C.

Fortunately it also means it might just be a good way to getting really quite impressive photos out of a camera that can be had for a pittance. These are the images that Brandon Dare (@mrbdare on Instagram) shared with me. They don’t tell the whole picture, but they do at least show a good sense of sharpness/contrast. They impressed me enough to do a bit more digging on Flickr.

Now let me just prefix this by saying, not every point & shoot camera I’ve not reviewed comes good on a Flickr search… The Minolta AFZ on the other hand did come good. Have a look here and you’ll find photos taken with one of these cameras by a chap called Henrique Godoy 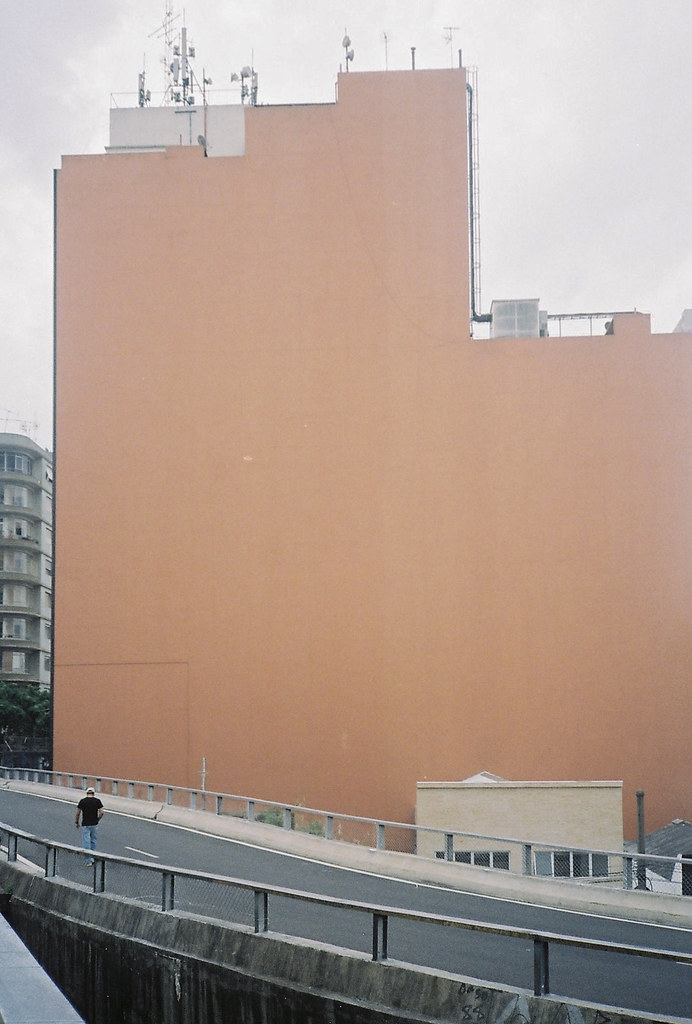 Outside of the understated but in my opinion really nice photography, it’s also more possible to see what the Minolta AFZ lens is capable of. It has that look that I can never find the words for that gives it away as being a little compact camera lens. The character of the vignette is part of it. But outside of that it lacks any obvious distortions, and doesn’t seem too susceptible to flare. By the looks of it, a very nice lens indeed… At least for a camera I picked up for a couple of quid!

Photos are one thing, how well it works is the next… It’s also the bit I can talk about first hand.

Before I get to anything else, I must first touch on the experience I had when I got some working batteries into it. I got it home and opened the bottom to find one of those odd shaped 6v monsters that usually costs about £13. Slightly irritated, I pulled it out to see if I had a matching beast in my battery draw. I didn’t, but upon closer inspection of the camera I found it also takes something I do have, AAA batteries, 4 of the things. They wouldn’t go in to start with, something was jammed, but eventually with a bit of force the cover clicked shut. Having just loaded a film into it before I changed the batteries it jumped into life a wound the film into itself a bit. Quite normal, but the Minolta AFZ makes such a racket that I nearly dropped it in surprise. On Instagram I described it as sounding like a food blender blending a tin can – I’m sticking by that description!

In terms of handling, it is what it is. There’s no escaping the 80’s/90’s styling. It’s also quite a big compact; about the same size as a Pentax PC35AF. Fortunately, this means it handles quite well; there is certainly no shortage of camera to hold on to. If it has one downfall it is probably the over complicated mechanism that switches the camera on and off. As well as covering the lens, it also covers the viewfinder in a little corrugated door, in my copy, this has a habit of all getting a little jammed. With the Minolta AFZ to the eye you are also provided with a fairly positive experience. The viewfinder is big, bright and has a high magnification. Though mine is also rather dusty. It also gives a series of varying steady or flashing green or red LEDs to indicate various states of function. It’s quite difficult to report on its ability or autofocus, but it’s always worth pointing out active AF I think. Most cameras are passive autofocus, but there are a few that use infrared active systems. My personal experience has been fractionally more positive with active systems, especially in lower light. Which would be great on this camera…. … if you could turn the flash off…

…which as I’ve already mentioned you can’t! This is quite a big let down for me. To be fiar, I do see this as a bit of an oversensitivity on my part. What does it actually matter? Well, its just that moment – we’ve all experienced it – when a flash fires inadvertently. It drives me mad. Not being able to override this potential annoyance is game over for me. It’s bad enough that most cameras don’t remember the flash off state when they are switched off!

Whats even more frustrating is that is does have a force/fill flash mode. Why include this feature and not the opposite? It’s just mind numbingly frustrating! Self timer and continuous shooting

Finally, there is obligatory self timer and a continuous shooting mode that allows a frame to be shot at a rate of 1 per second!! And that’s your lot…

So there we are, a camera review with no photos taken by me. Thanks to Brandon for sending me the pictures. Especially as they encouraged me to dig a bit further on Flickr. It’s always nice to find a photographer who uses a camera as extensively as Henrique Godoy, especially when the photos are as nice as his.

So what to do with the Minolta AFZ now. I’m impressed with the lens, but thanks to a functional shortcoming I will never shoot it. I did cross my mind to modify it like Ric did his Contax, and kill the flash permanently. With its active AF and a lowest possible shutter speed of 1/40th, it could make a nice low light snapper. Ultimately though, the noise it makes would annoy me.

Finally, I’m going to give this camera away now – let me know if you want it. You don’t have to give me any money, but a voluntary donation to this cause would be appreciated! Kodak Portra 400 - My First Experience With - by Aukje