I’ve often asked myself “Why would anyone want to buy a 50 year old plus Fed 2 Russian (Or any other) Rangefinder camera?” I still don’t know the answer to that, but the feelings and desires we get for some apparently inanimate objects is quite irrational. Bass guitars being my other GAS weakness.
I have been interested in older LTM rangefinders ever since I bought a charity shop Fed 4 and a Jupiter 3 for my Sony A6300 mirrorless but had never looked at the Fed 2 Russian Rangefinder. I’d borrowed a Zorki 4 from a friend, but they are so heavy and clunky.

I’d looked at Leica and dismissing them for the cost – especially as the older ones are little more than a box with a shutter. The lenses though are another story of course. I had as I said, previously bought myself (and sold on) a Fed 4 with a built in meter. It worked really well, and had an LTM lens. My plan was to play with other lenses, but the ergonomics were all wrong for me. Shutter in just the wrong place. I found the rangefinder patch too dim and the camera was too big (I thought)!

My wife and I were walking past MrCad one day on the way back from the Don McCullin show at Tate Britain last year.  Somewhere I’ve passed by many times but never managed to go in.  Sparkling in the window was a lovely little Zorki 2. We popped in for a shifty. This felt more like it. It was a lovely little thing, however I didn’t get on with the separate rangefinder and viewfinder. Also the take up spool seemed to be jammed in and so, for the asking price, it stayed in the window.

On returning home and after a bit of Googling I came across a seller on eBay offering various versions of the diminutive Fed 2 Russian Rangefinder. A small, simple, sweet little rangefinder, similar to the Zorki 2, but with a combined view and rangefinder that was being offered with a variety of lens options. A collapsible Elmar copy or Industar 61 amongst others.

My plan was for an Elmar collapsible copy, so I could pocket the camera with minimal fuss. Or pop on the Jupiter 3 if I wanted something a bit faster and more fancy. I also figured if I come across any other interesting glass in a compatible mount I can just pop it on to the Fed 2. Simple! We’ll see on that one what with the focus calibration problems I’ve read about in these older lenses

The Fed 2 Russian Rangefinder is not a complicated camera. As I said earlier. Its essentially a light tight box with an adjustable shutter. The shutter speeds are limited to Bulb, 1/25, 1/50, 1/100, 1/250 and 1/500. That’s it. It does have diopter adjustment though. And a cold shoe with sync socket on the front. A rewind knob on the left side of the top plate (as you hold it) and the rewind release is around the shutter (shutter release is still in the wrong place, but I’ll live with that).

It’s easier to load that a Zorki 2 or a Leica of the similar era I think (although I’ve never tried either of them) as the whole back and bottom comes off with two nicely engineered turnbuckles on the bottom plate, either side of the 3/8″ UNC 16 tripod socket. The film counter is on the right turret. Don’t forget to zero it when you load or to set the shutter in the correct order to advancing the film with the somewhat awkward wind on knob, not lever (you get used to it).

The lens it came with was the Elmar copy. f3.5 – f16 and a minimum focus distance of 1M. Usable and clean. the exposed focus helicoid was a bit of a surprise, but seems to work ok. It probably could do with a good service and the rangefinder accuracy checking but I’m not sure I can be bothered. Yet.

The Jupiter 3 is a different beast altogether. f1.5 – 22. Also a 1M minimum focus distance. Well made and has that super fast Sonnar formula that Hamish talks about here. The lens looks well I think mounted In the Fed 2 body. 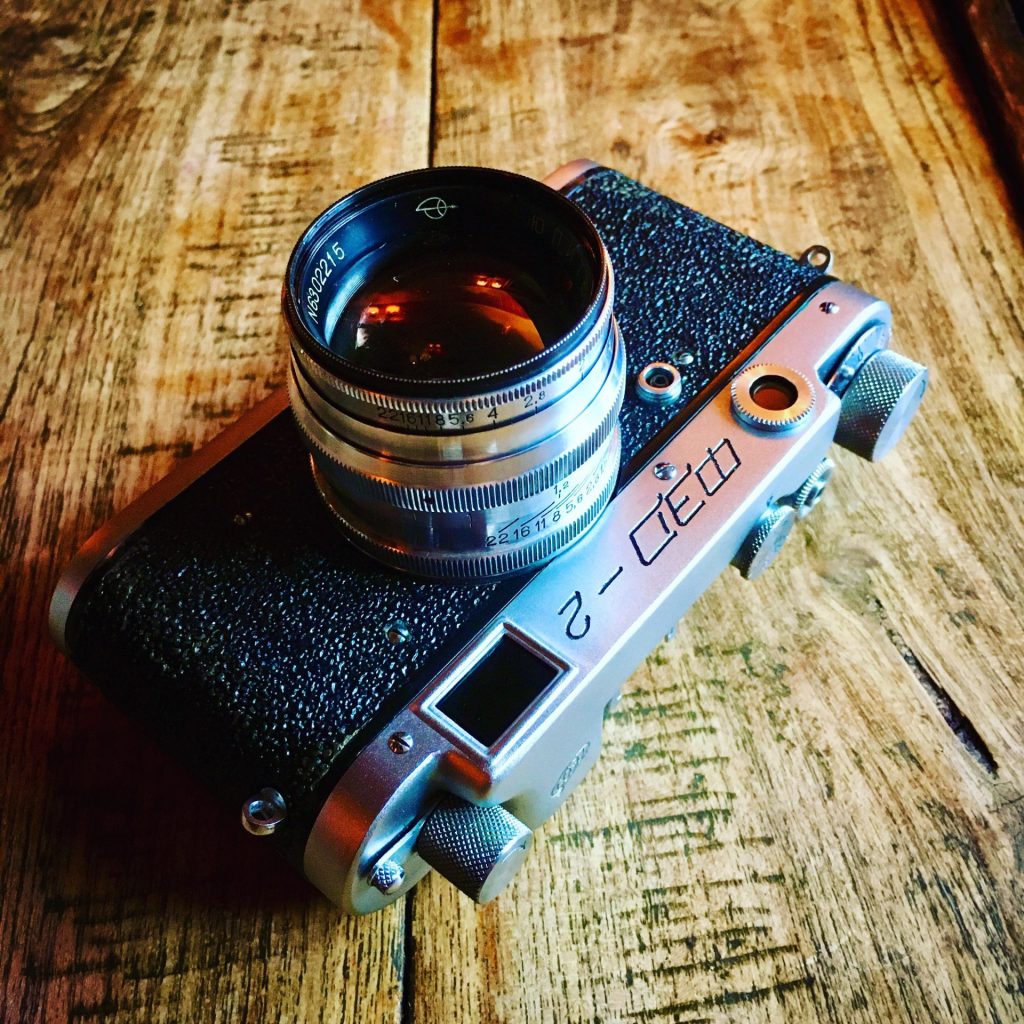 So far I’ve used the Fed 2 less than I thought, but that says more about me being picky with what I shoot these days and have so far only used expired colour or black and white film. I’ve also set myself the challenge of shooting ‘Sunny 16’ with every roll. Everywhere. Inside, outside, sunny, cloudy, whatever. So far the results have been varied but acceptable. Thankfully I’ve not managed to completely black or blow out a frame yet. I’ve always got something for my labours. Just the quality varies. Couple this with my own light leaky bulk loaded HP5+ from 1996, the fact that I captured anything at all from this roll was  frankly a bloody miracle.

Developed in Rodinal at 1:25. Scanned at Truecolour Imaging as always. Soon I’ll be scanning my own with my very own Pixl-Latr!! 🙂 Under The Wire (Jupiter 3)

I like the character and atmosphere in some of these images. Dark, grainy, light leaky loveliness. Its found a place in my heart this little Russian box with a shutter. No batteries, no meter, iffy framing, questionable rangefinder patch and fiddly controls. But I love it. Along with my Olympus XA it’s staying in one or another bag or pocket for ever.

Thanks for reading my ramblings. Comments and conversation always welcome. Hasselblad XPan and its Fabulous 30mm f/5.6 Lens in Mississippi – by Andrew Morang