Firstly, this camera isn’t strictly speaking called a “Prima 120” it’s a “Prima Super 120” or a “Sureshot Classic 120” or an “Autoboy 120” or “Prima the Autobot” (hang on, I tell a lie, that last one is a transformer) … Can you see why I just refer to is as a Prima 120? To this day canon have broadly different names for their cameras depending on the continent they are sold on. I guess Americans are more rebellious than us English who just prefer numbers and letters? Anyway, as per usual I’m rambling off topic before I have even gotten started!

One of Canons more attractive, smaller, and higher specified 35mm compact cameras, and whilst I consider it firmly in the category of “Point & Shoot” it has a few tricks up its sleeve that will appeal to those who like their compact cameras a little more customisable in their function. 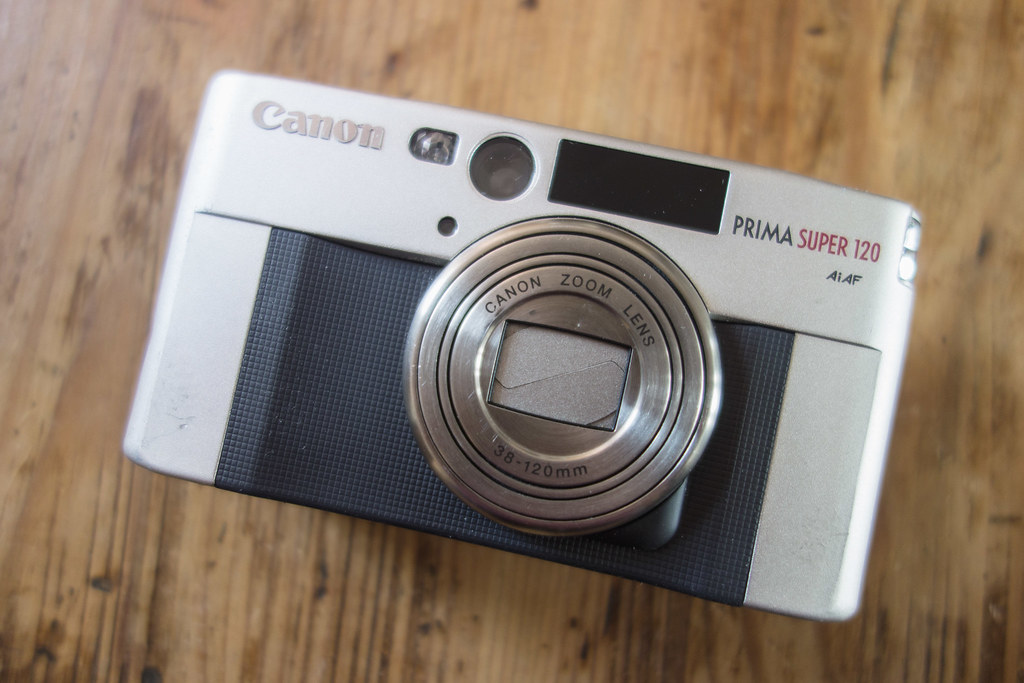 The most obvious difference between it and every other camera I have reviewed for this site so far is it’s lens. Rather than the usual fast-ish wide-ish lens that you will usually read about on this site, it has a moderately wide to telephoto lens, and actually a pretty slow one at that! 38-120mm focal length combined with a f/4.5-10.9 maximum aperture make for some pretty poor stats on paper, especially when compared to modern compact digital cameras. But all is not about speed, quality is the key factor that makes the lens on this camera attractive! If the various other sources of info on this camera online are to be believed it’s an all glass affair with some special elements mixed in to give it the edge. And an edge it does seem to have! For a zoom, it’s very impressive! Ok it doesn’t quite have the bite of some of my fixed lens compact cameras, and at the long end of the zoom range it doesn’t quite seem as impressive as the middle of the range, but for the sort of snapping I have done I have not, in any situation been disappointed with the results. I say middle range, as I’ve not been 100% sure that wide end is quite as good as the middle of the range either. But to my mind neither end are bad enough to cause any concern especially with the 400 iso film I usually shoot with. 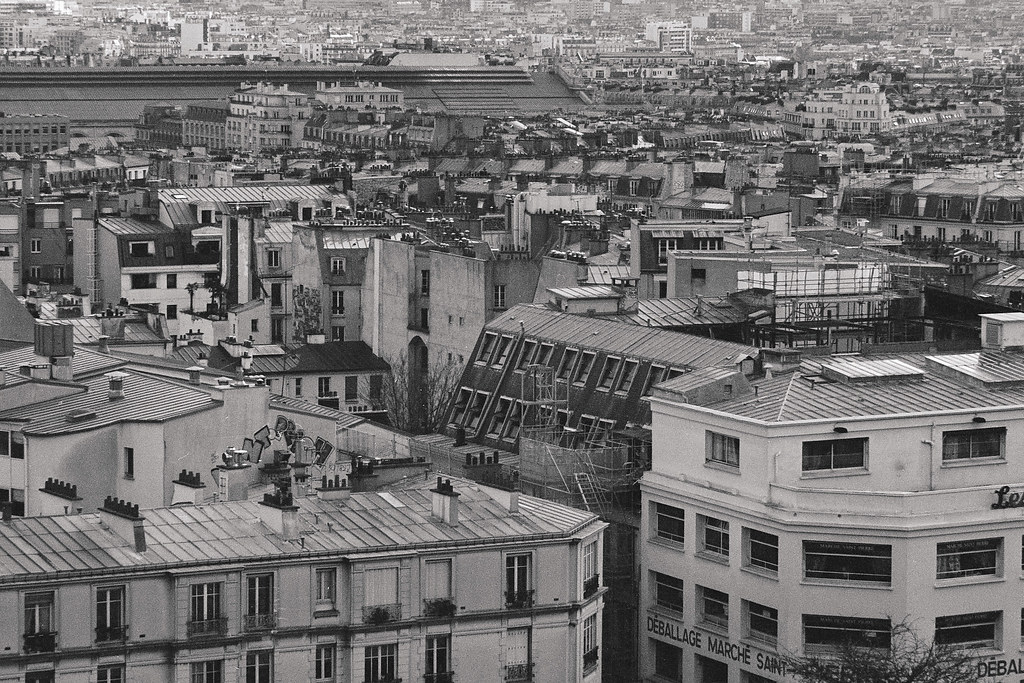 View from by the Sacre Coeur in Paris – Shot with XP2 at the long end of the zoom.

It also has a seemingly impressive hybrid passive/active AF system, which has resulted in me not missing focus on a single shot so far (other than when trying to take a photo of a turkey that was too close to the camera). Now admittedly, I’ve only put a handful of rolls through it, but this still represents an impressive statistic! I have noticed the camera seems to have a preference for faster shutter speeds and wider apertures over the opposite too. This tendency to use wider apertures seems to correlate with the presence of active AF in these sorts of cameras. One way or another, despite its relatively slow maximum apertures I have been able to take sharp photos in situations where the light has been fairly low. I suspect it also contributes to the lack of motion blur at the longer focal lengths. 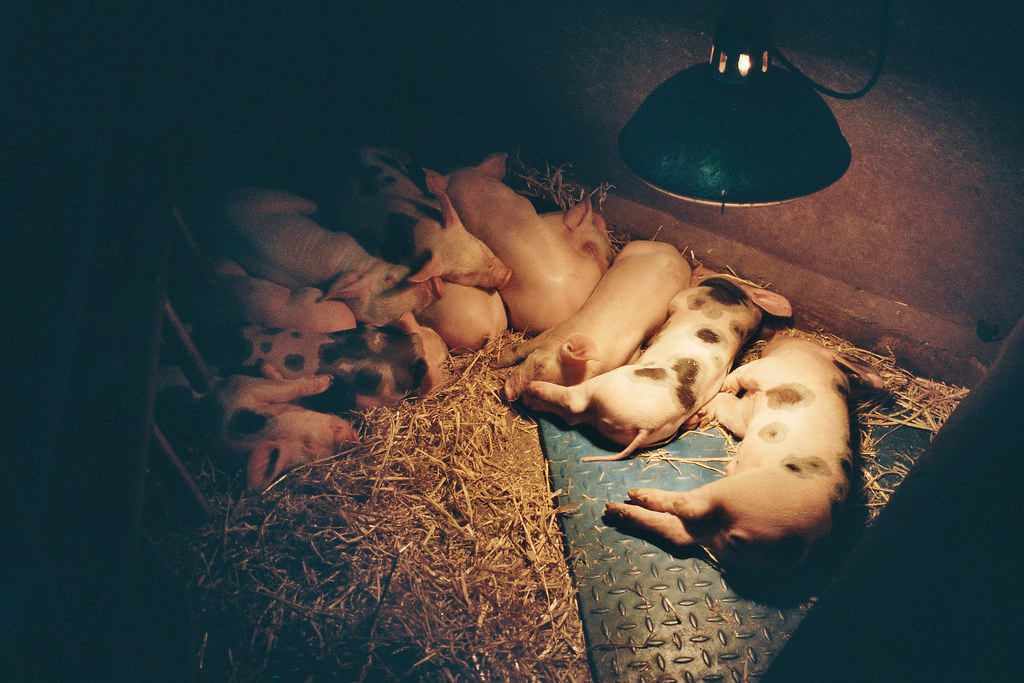 There is one notable frustration with the camera that makes the above a particularly important factor, and that is the shutter release. The half press is reasonably positive in its action, but full press is a different story. It requires just a little bit to much pressure to make the camera fire. This pressure is really noticeable when looking through the finder at longer focal lengths, you can see just how much the you are moving the camera with this pressure. Now as I have said, this doesn’t seem to cause to much of an issue due to this tendency to choose as faster shutter speed as possible, but I can imagine it could cause motion blur given curtain circumstances. Especially as the manual states the maximum shutter speed at 120mm/10.9 to be 120th! 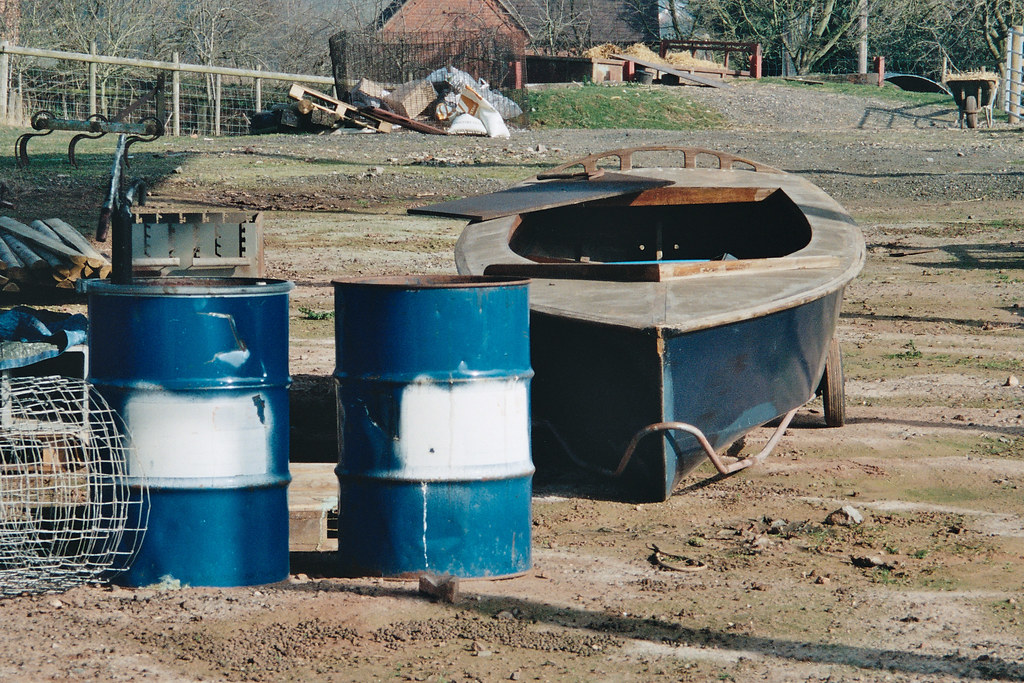 In terms of handling It’s also a little chubby and can be a bit uncomfortable in the pocket when compared to the likes of the GR1v etc, but in the hand it feels nice and solid and the controls all feel well placed. And for its zoom capability, it’s a pretty impressive size I think. It’s also a fairly pretty camera from the front, all be it a bit tacky looking from the back. I’ve read people saying the design harks back to old Canon RF cameras, but I must be unaware of the model, as I don’t see it my self, at least beyond the use of black grip on silver. The VF I’m also not sure about, but being used to fixed lens cameras I suppose a compromise is inevitable on a zoom camera? It’s a little like looking through a hazy keyhole on my copy of the camera, but it’s enough to judge framing relatively well. Close up framing when at the longer end of the zoom isn’t particularly accurate mind, but distant framing is a lot better, and close up when the lens it at the wide end seems fairly good! 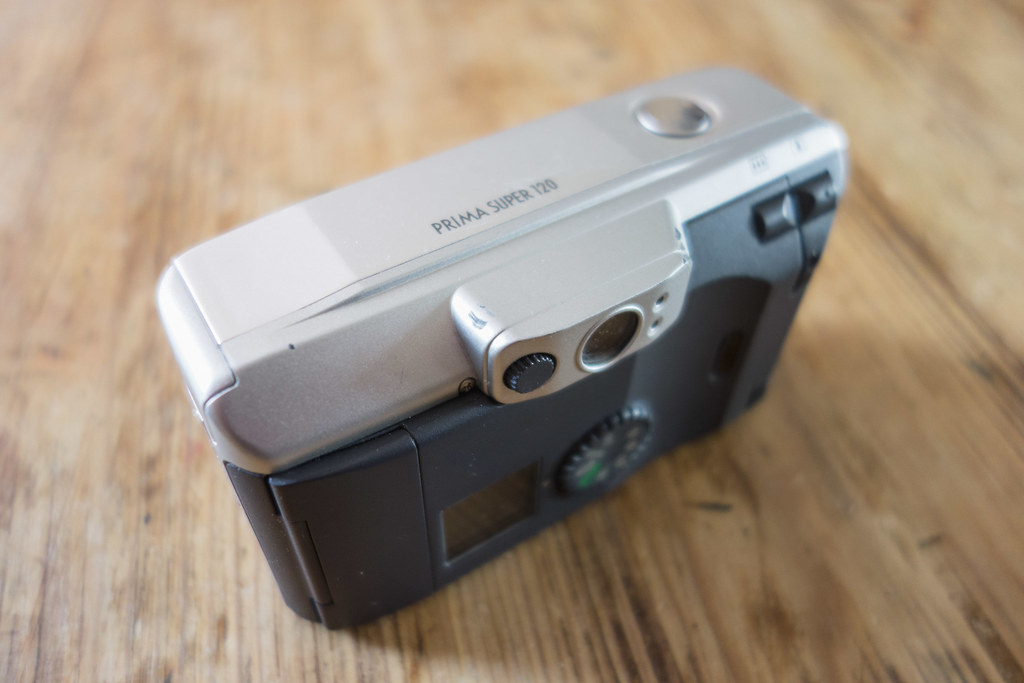 One thing I can quite easily get a bee in my bonnet about when it comes to AF 35mm compact cameras is shutter lag. If you have read my review of the klasse w you might be aware of this? The klasse w has no excuse, it’s a premium compact designed to keep up with the best of them. This little canon, although perhaps premium amongst its peers, is not in the same league as the Klasse. Because of this I would perhaps have a tendency to be more lenient on it, but surprisingly, no leniency is needed! There is a fraction of a second after half press where it thinks about exposure and focuses the lens, but this fraction is a lot more akin to the GR1’s speed, ie pretty fast. Then at full press there is no real noticeable lag. I find these fractions hard to quantify, but for the feeling I get from the camera, and this camera feels pretty responsive, certainly more responsive than the Klasse! It’s also pretty quiet at focusing, not to mention the motor of the film advance which also gives of a minimal, fairly low pitched wirrring noise when triggered.

I mentioned at the beginning of this post that the camera has a few tricks up its sleeve. Simple things like “scene” modes can prove useful once in a while, but one of the modes on the rear mounted control wheel of this camera is especially useful. I think of it as a “create your own” scene mode. Switch the camera to “personal” and any of the modes you set stick even when the camera is switched off. And that includes flash! It has other modes like spot metering, self timer, various flash modes, continuous shooting and -/+1-5ev compensation. Although the latter is not particularly advanced being limited to only either -1.5 or +1.5 and only available when the flash is off. 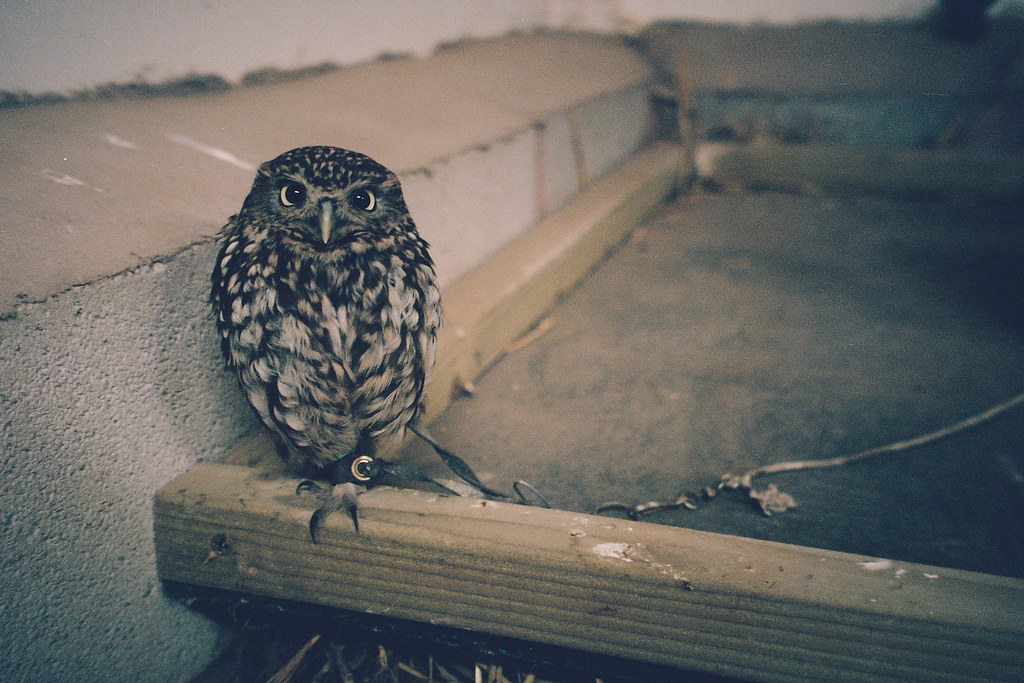 With the light being too low and not wanting to scare the owl I selected to underexpose by 1.5ev. 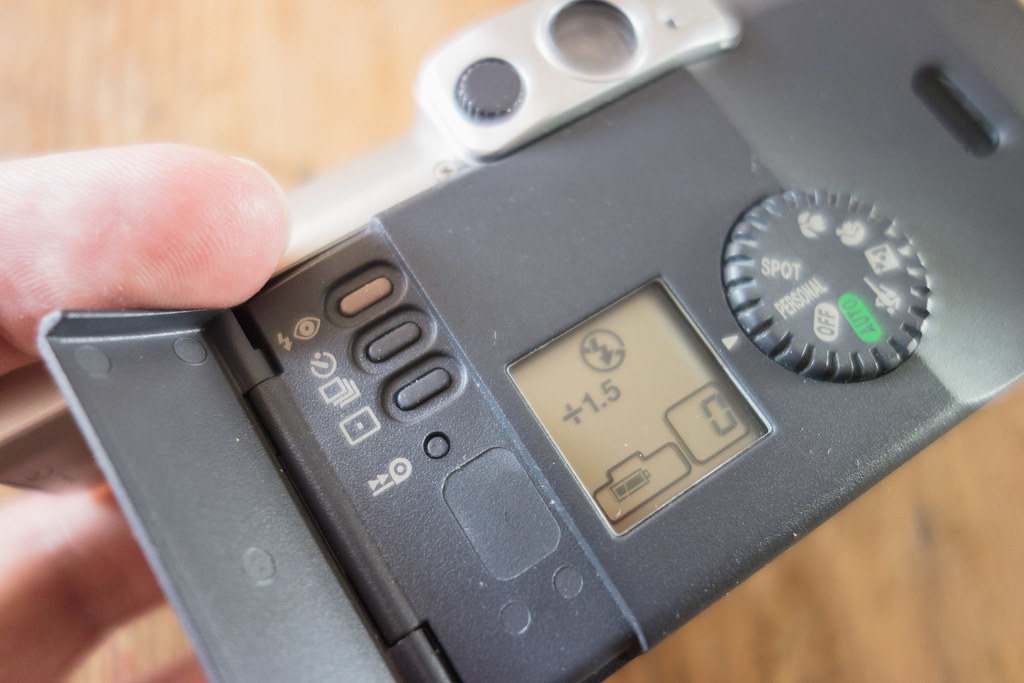 Some of the features are hidden behind this little flap on the back.

I also discovered another trick that allowed some faster decision making. When shooting in auto, the flash can be manually disabled by simply pushing it back into the camera. I quite like the way it pokes out of the side automatically when the camera is switched on – it reminds me of a transformer, though doesn’t make the cool sound a transformer does. But I did wonder if it was possible to override it by manhandling it in the same way the Ricoh ff90 is. It seems to work fine, and just fires as if the flash is switched to off!

The last thing of note about this camera I’m going to demonstrate with a poorly taken photo! The last film I put through this camera was at a farm park with my wife and daughter. The turkeys were some of the only animals we got really close to… Ugly creatures, especially the males! Anyway, just messing around with the last few shots of the roll I thought I would see how close in I could get. Zoomed right in, this camera lets you get as close as 58cm at the long end of the zoom, which allows some pretty close up shooting. Would have been an ok photo if the turkey wasn’t moving so much! 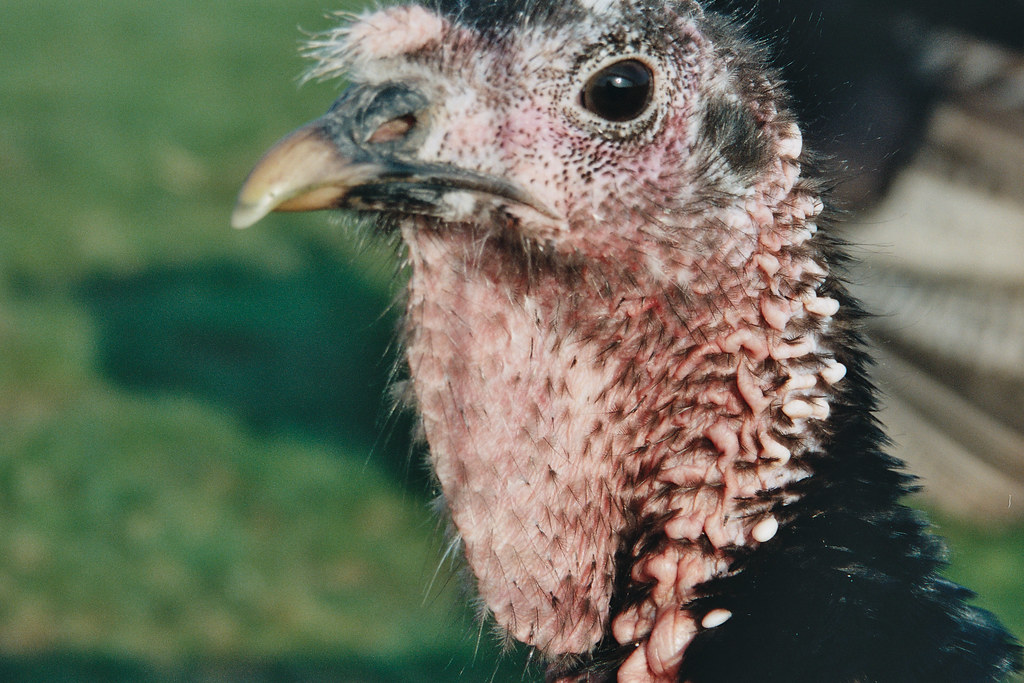 It’s a fairly well sized, usefully specified compact with a great lens in terms of quality and range. Ok the lens is a little slow, especially at the long end, but if you are worried you can always shoot faster film, or just recode some slower film like I did for my trip to Paris. There are zoom cameras out there that possibly have better features or even better quality lenses, but I am yet to find one that offers this range of zoom, quality of lens and feature set in such a small package. That’s not to say there isn’t one, I’ve just not discovered it yet. For now at least, if I want to shoot telephoto in daylight conditions, this camera is definitely my first choice… And at the less than £4 I paid for it, that’s saying something I think!

If anyone can suggest a compact zoom that somehow bests this canon, please feel free to comment below.

Three Nights in Paris - And some reflections on my camera choices