‘Unremarkable Architecture’ – Kicking of a photo project (with Kodak 400 TMAX)

I’ve decided to start a photography project. I’ve had some sort of ill-founded fear of such things for quite some time now, but thanks to a few inspiring words from Rob Knight on ep.85 of the Sunny 16 Podcast I’ve realised many of the things that’ve stopped me from getting started are frankly nonsense. As such “Unremarkable Architecture” is born.

To be honest, even naming a project has given me a sense of discomfort. I have such an overly strong sense of caution around being artistically-pretentious that even something as simple giving something like this a name has just felt like something I couldn’t do. I think I’ve got over that problem now. The conclusion I’ve come to having listened to the above mentioned podcast is that actually I’m not sure I care even if it’s pretentious. I’m not doing this for the benefit of sharing it online or even sharing it with other people – though as a blogger, I no doubt will be sharing it. I’m also not doing this as part of some sort of bid to promote myself as it as an “artist”. I’m doing it simply because it amounts to the sum total of a whole bunch of things I like doing. As such, fundamentally I am doing this for myself. Doing these things for your own benefit was a one of the key take-aways from Rob’s message, and though this doesn’t feel like a new idea to me, somehow hearing it on the show really kicked my brain into gear.

In terms of the type of architecture that interests me, I think I’m a bit of a contrarian so I tend to find most pleasure in architectural design that others would likely find ugly, uninspiring or worthy of being knocked down. I am, above all else, a fan of Brutalist architecture. Brutalist architecture is so often frowned upon because of how “ugly” it is. At the same time, there are many (like me) who see beauty in the hard shapes and pronounced facets. Brutalism will therefore no doubt find a place in this project, but actually the type of architecture I’m going to be most regularly framing is that which isn’t often quite a divisive.

Like in any given UK town or city, there are a lot of fairly unremarkable buildings to be found in Worcester – most of which best fit into the more broad classification of “mid-century architecture”. It’s this sort of architecture that I want to focus on the most – the sort that sometimes raises an eyebrow through being fairly dislikable, but doesn’t generally cause quite as much upset as full blown Brutalism.

In Worcester we’ve actually recently lost a quite a prominent chunk of mid-century architecture which used to be located directly opposite our famous 10th century cathedral. To be fair, given it’s proximity to one of our key tourist attractions, it was a bit of an eyesore, and what’s replaced it provides a much better focal point for the city – though, in a way I miss it. You can see an old picture of exactly the building I am talking about in this local news article that talks the old “Giffard Hotel”, and another picture of it as the later Travel Lodge here. That old frontage was knocked down and replaced with the “Cathedral Square” frontage you can see here – if you compare the images you can see the statue of Elgar and the tall part of the hotel that remain.

Kicking things off in a car park

I mention all this as I kicked off this project by taking some photos of the old car park behind part of the new frontage and the tall part of the hotel. I say kicked off, but actually when I took these photos I didn’t know it was going to turn into a project – it’s only liking them as much as I did then hearing the podcast that made me put tow and two together…

The car park in question is the city centre NCP. To be honest, I don’t know that much about it, but as I understand it, it was built in the 50’s/60’s. I’m pretty certain was part of a post-war redevelopment of Worcester that, believe it or not, saw the destruction of part of Worcester’s most historic Tudor street.

Fortunately, there were some successful petitions to save some of the Tudor buildings, so we still have the Tudor house museum and further up the road, Greyfriars as well as the rickety Tudor buildings that surround them. Looming over the Tudor house museum is the car park in question. I will at some stage revisit and take a shot of the landmark spiral entrance from the outside (you can see an old image of it of mine here).

To kick this project off I started inside the car park. This first shot was taken half way up the upper ramp of the car park looking back down into the empty penultimate floor. 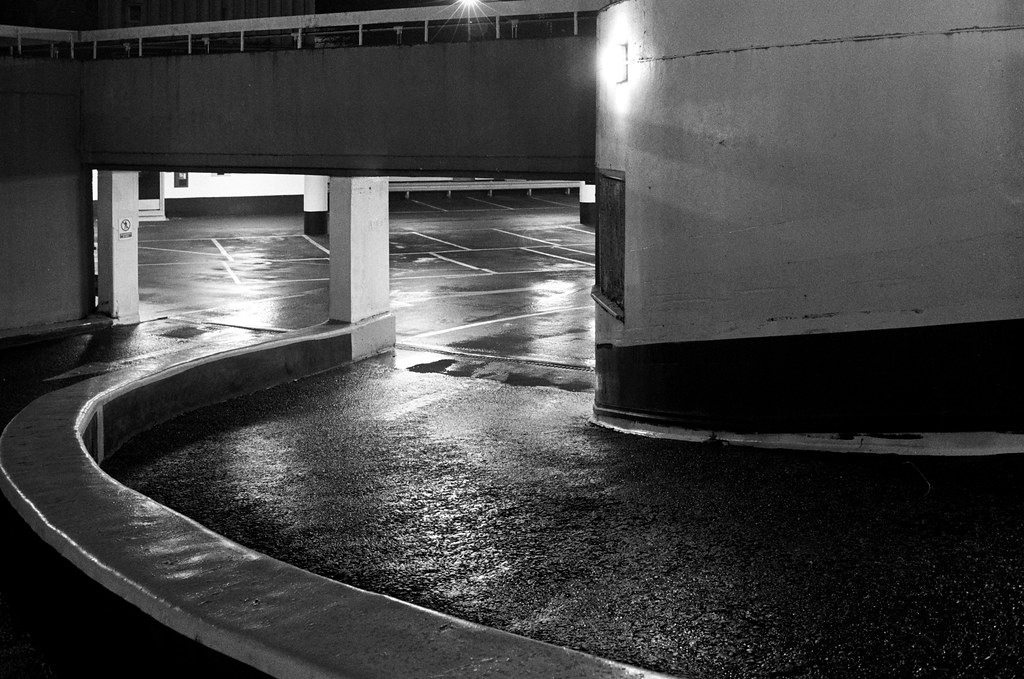 This next image (the same as the one at the top of the post) is the same ramp, in fact almost the same spot looking up – the building at the top is the top of the old Giffard/Travel Lodge Hotel that can be seen from the other side as referenced above – they did a lot to improve the view, but this chunk of mundane still towers above it all… 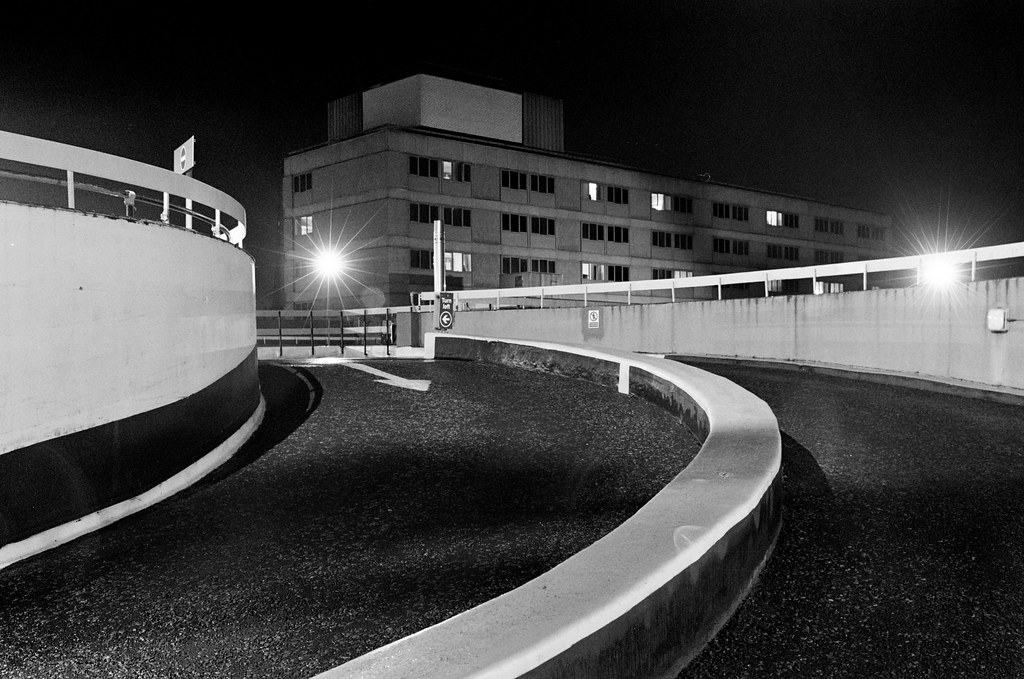 At the opposite end of the top of the car park, this lump of brick and metal houses one of the car park stair well and lift shafts. The flare and unusual vertical artefacts are a bit of a happy accident – though I did have a feeling framing the lamp just out of frame would have some impact on the old lens I am using. 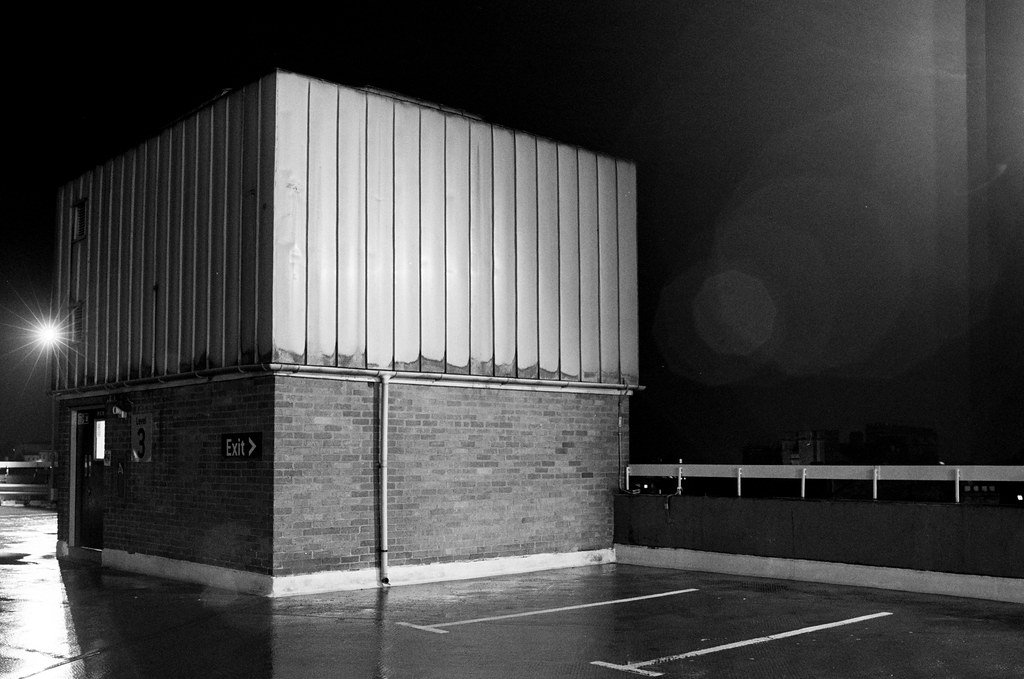 Something else I took from the interview with Rob Knight was not to worry too much about the direction and goals of a project. It’s actually this particular part that made me realise I should do this. As it currently stands, the above photos best fit the theme that I have in my head, but actually, I really like this next shot too – it’s either going to fit, or it will become part of something else I might or might not have in mind… 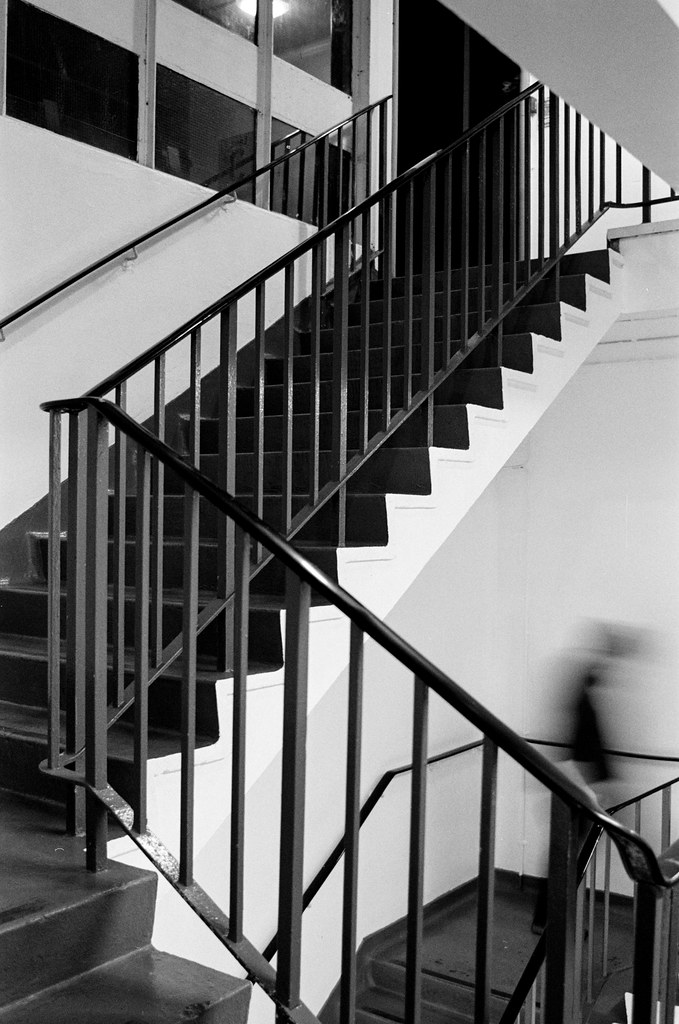 Thanks to Kodak Alaris – the TMAX choice

Unlike most of the content I post on this blog, I’ve decided to end with a note about the kit and film I have and will continue to use. To start with I want to say thanks to Kodak Alaris for sending me the TMAX 400 film I used to take these photos – as I also mentioned here, they recently sent me a bit of a care package of film to try. It was purely an experiment that I went out with my camera loaded with this film, but having shot it I realise just how suitable it is for my chosen subject matter.

I usually shoot HP5+, a great all purpose film that frankly withstands my usual bullshit-haphazard approach. Where Kodak Tmax 400 has proven itself particularly ideal for this project is in that it’s quite evidentially higher resolving than HP5+ – I’m not usually so interested in fine details, but for this sort of subject, I feel it’s quite appropriate to attempt to capture more detail in the subject. Tmax also has a much finer, though still evident grain. Despite shooting with a tripod, I feel that shooting a finer-still 100 speed film would perhaps impart too much of a smoothness to the results. I want a grain, I just don’t quite want the level I find when I shoot HP5. It seems, almost serendipitously, Kodak 400 TMAX has provided me with exactly the look I want. As such, I intend to continue this project shooting only with it.

An SLR and a Tripod

For consistency, I also largely intend to stick to one camera and lens. The lens being the most important piece in the puzzle. In fact the type of lens has in itself insisted upon me two bits of equipment I rarely use, an SLR and a tripod. The SLR being my trusty F2 with either its non-metered prism, or if I’m feeling fruity, I might use a waist level finder. I haven’t got one yet, but I also intend to add a geared head to my tripod. As mentioned, it’s the lens that’s forced my hand in terms of the camera. That’s because I’m going to be shooting with a 1970’s Nikon 35mm shift lens. There is literally zero way this lens can function on a rangefinder – to use it, you have to be able to see through it. If you’re unaware of the nature of a shift lens, for now you’ll have to wait as I’m going to come back to what the do and how another day.

Despite my usual ranting about small cameras, not carrying too much stuff etc, I actually really appreciate the time I spend with gear like all this. People always talk about how film slows them down – I don’t really get that so much. Using a tripod, manual stop down shift lens and really concentrating on framing does. It also offers me a good opportunity to crack out the spot meter and overthink exposure too – which I quite like doing once in a while

The exception to the rules

Whilst largely speaking I’m going to be taking some more advice I’ve heard in Rob’s interview (and then repeated by Stephen Dowling in the following week’s podcast) to stick as much as possible to one film stock, one camera and one lens when shooting a project, I am going to say now that there is a very strong possibility that I will pick up my 4×5 camera at some point. It makes perfect sense to use it for a project like this. I just want to find my feet a little before I commit to the expense…

So that’s that… I’ve come out as having a “project”… Thoughts? The Short Life of Tri-X Man - by Frank H. Wu 5 Frames with a Pentax Spotmatic - By Wesley Fortin