First things first, I want to say thanks to Kodak Alaris for sending me this roll of Portra 800 film to shoot. A little while ago I was contacted by their PR guy who asked me which of the professional line of films I had shot. I was almost embarrassed to say that apart from a very rare roll of Tri-X and a couple of rolls of Portra 160 I shot on holiday about 4 years ago, Portra 400 was the only one of their films that I shoot regularly, and certainly the only one I feel particularly familiar with.

In response to this I had a little care package sent to me containing (along with a few other films I’ll come back to at a later date) two rolls of Portra 800. Funnily enough, I’d actually been warned off Portra 800 in the past. I was told that thanks to it not being one of the new Portra emulsions, I’d be better off underexposing Portra 400. That’s advice that has stuck with me until these rolls landed on my desk at work.

Given the higher speed of the film it seemed only right use it in lower or more difficult light to see how it held up. I must say, I am really happy with the results! It’s certainly not as grainy as I thought it might be and even where large parts of the image were under-exposed, it scanned really easily! This latter point being a big deal for me – I really don’t like faffing around with my scanner, with my preference being just to get decent files that I can work with in lightroom. 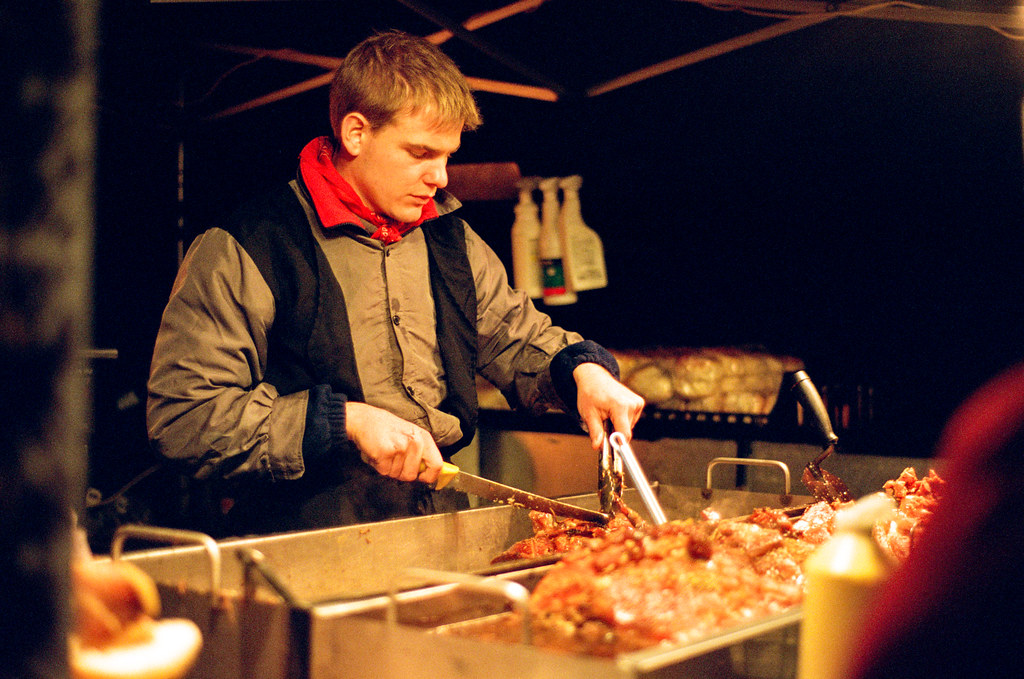 The next step (somewhat inspired by some advice I had on twitter) is to overexpose some in good daylight – I’ve seen some really nice results, and want to see if I can capture a bit of the colour pallet I’ve seen. But anyway, more on that another time…

The Nikon F75 at the Christmas Fayre

I talked around the way I think differently with different cameras in my hands in my post about the Lure of the Uncomplicated camera. How the Nikon F75 impacted on my thought processes at the Christmas Fayre makes for a really good opportunity for me to qualify some of those thoughts without me getting too bogged down in being too critical of the camera itself.

When I started this series of posts, I said that I hoped I wasn’t going to get too distracted by all the features the camera offered. As it turned out, not getting distracted was a little harder than I expected. Though, to be fair, I only really have my own brain to blame.

Shooting one of my manual cameras in difficult lighting I’m in full control and have my mindset set to adjusting the exposure to the light being reflected off my chosen subject matter, not all the bright points of light. I know how to expose properly in this sort of light without a meter and – at least with the flexibility of my chosen negative films – I rarely fuck it up.

Even shooting a simple point & shoot I can give myself a sense of being in control. Point & shoot cameras often have pretty dumb centre weighted light meters, so it’s often quite easy to work out what they’re thinking with little more than a basic understanding of the metering pattern any particular P&S camera might have. I have in fact published a post about shooting point and shoot cameras in low light using the same Christmas Fayre for example images – have a read here

Getting in a muddle with a Nikon F75

Shooting the Nikon F75, my mindset started out as such that I could point and shoot in the difficult light of a Christmas Fayre and everything would be ok. Actually, as it turned out, this sort of worked out okay. I guess the camera’s evaluative “matrix” meter did a reasonably good job. I also suspect that the latitude of the film helped out a bit. 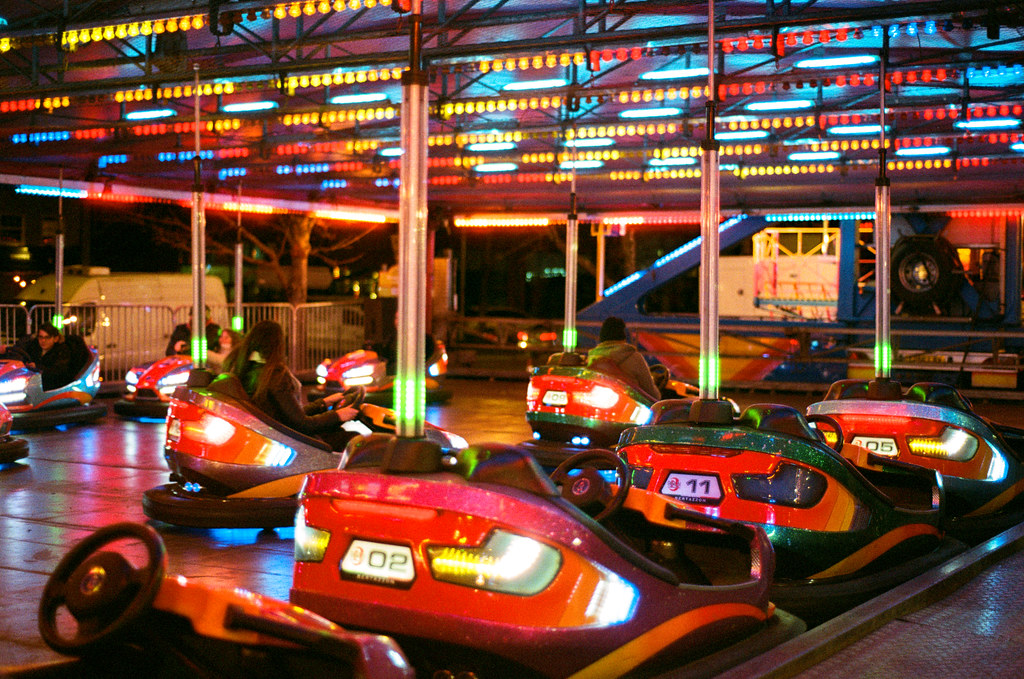 Regardless of the results, as I started shooting, I also started to feel out of control. The problem I had was with the level of information I was being given combined with my understanding of how the camera works all fighting against my instincts.

The camera reads out shutter speed and aperture in the viewfinder, so with it set to aperture priority in the very mixed and variable light the shutter speed was varying from its maximum to less than 1/30th. This was sometimes happening through changing the direction I was pointing the camera even as little a few degrees one way or another. This is of course due to the huge variation and nature of the lighting levels at the Christmas Fayre at night. 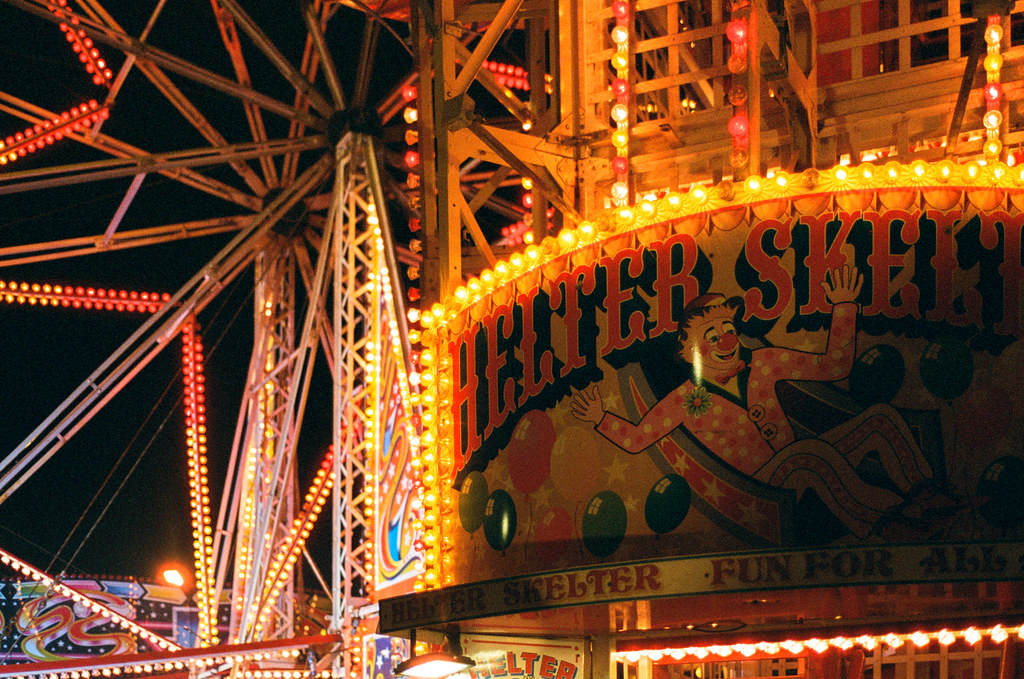 The problem I have is that given a camera with this level of specifications, I think I’m smarter than it, but also know it’s pretty clever too. The issue I have is that whilst I know it’s very clever, I found it hard to judge how clever it was being at any given time. I know that 9/10 times it’s going to make a good decision for me, but given my worry about the one time it’s going to fall over, I spend my time trying to judge it’s decision, rather than trying to judge the light for myself. 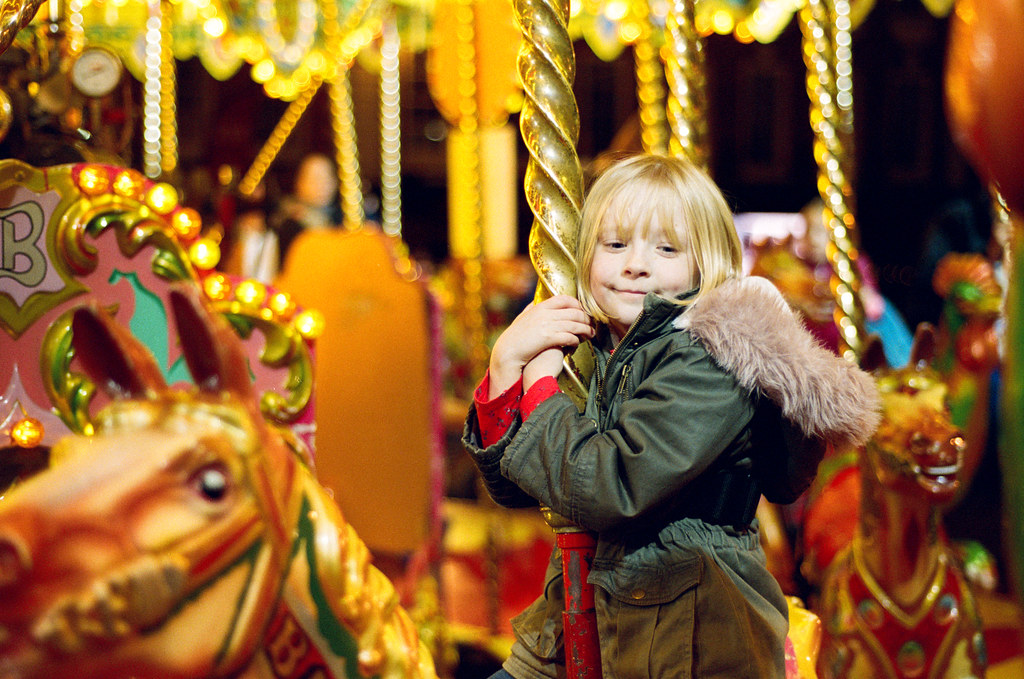 This became a massive distraction to me, and really impacted on my enjoyment whilst shooting it. What I should have done – and actually did after shooting a good few frames – was set the camera to manual and make use of my own brain and not the cameras brain.

Of course this frustrated me though both regretting not just taking a more simple camera, and being annoyed at the Nikon F75 for not allowing me to choose a more simple metering mode (centre weighted metering is only available in manual mode with the F75). I was in the paradoxical position I talked about in my Fuji X100f post where I simultaneously wanted both more and less features.

The above amounts to AE fail for me. I appreciate that in reality it didn’t let me down, but the shooting experience was hindered and so didn’t feel like a positive one.

Unfortunately I also had an autofocus failure too. The problem with the autofocus was not so much that it didn’t find focus, although it did fail in that department on and off too. What really annoyed me was that in its attempts to find focus it triggered the bloody annoying autofocus assist lamp which combined with it hunting and not finding focus in the poor light quite readily drew attention to me as I tried to take candid shots around the Xmas Fayre. Of course, it was only after I got home did I realise I could turn the AF assist light off via the custom menu… 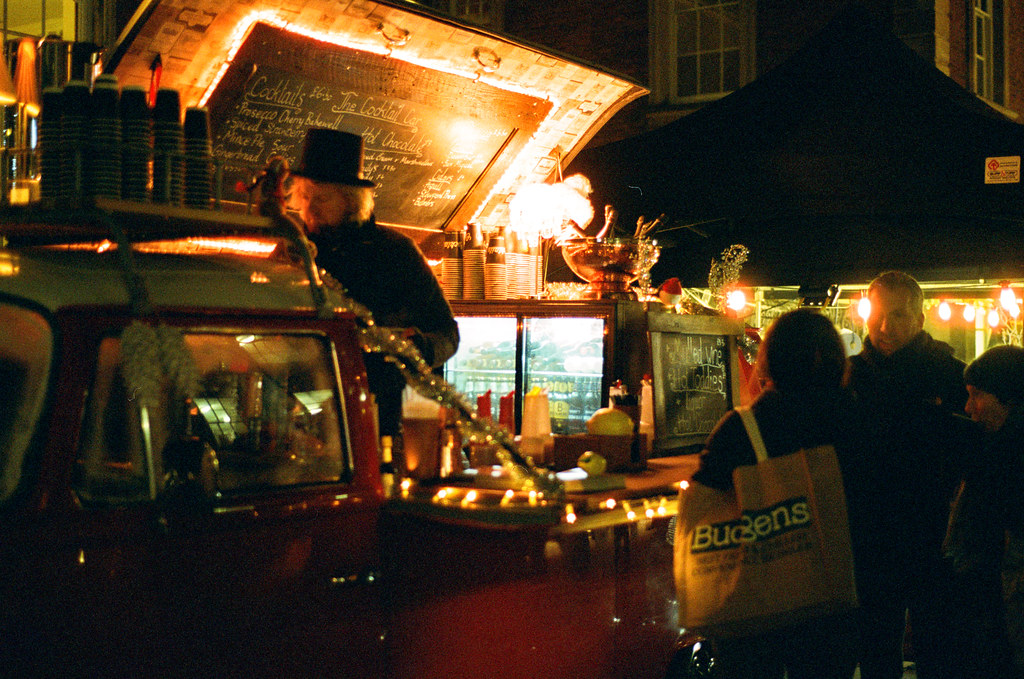 Portra 800 doing a stunning job at capturing the available light and being very easy to scan / The Nikon F75 doing a crap job at focusing and not drawing the attention of the man in the background.

It was actually around the same time I realised I needed to switch the camera to manual exposure that I also realised manual focus would have suited me much better. I was shooting a camera that at its core is designed around automation. It doesn’t even have a manual focusing aid beyond a little focus confirmation light. Even the lens feels horrible to use as a manual focus lens…

It goes to show that just because a camera does have a lot of features, doesn’t mean it’s optimised to be used in all the different ways it can be. I actually find this quite frustrating, just as I felt with the Konica Hexar, it makes me feel like some of the features are really just superfluous fluff. But anyway, as I said, I don’t want to get bogged down by being critical of the camera itself, this really is about my personal approach, and how the Nikon F75 just didn’t work for me given this type of shooting… and that’s, as I say, despite getting results that I’m quite happy with. 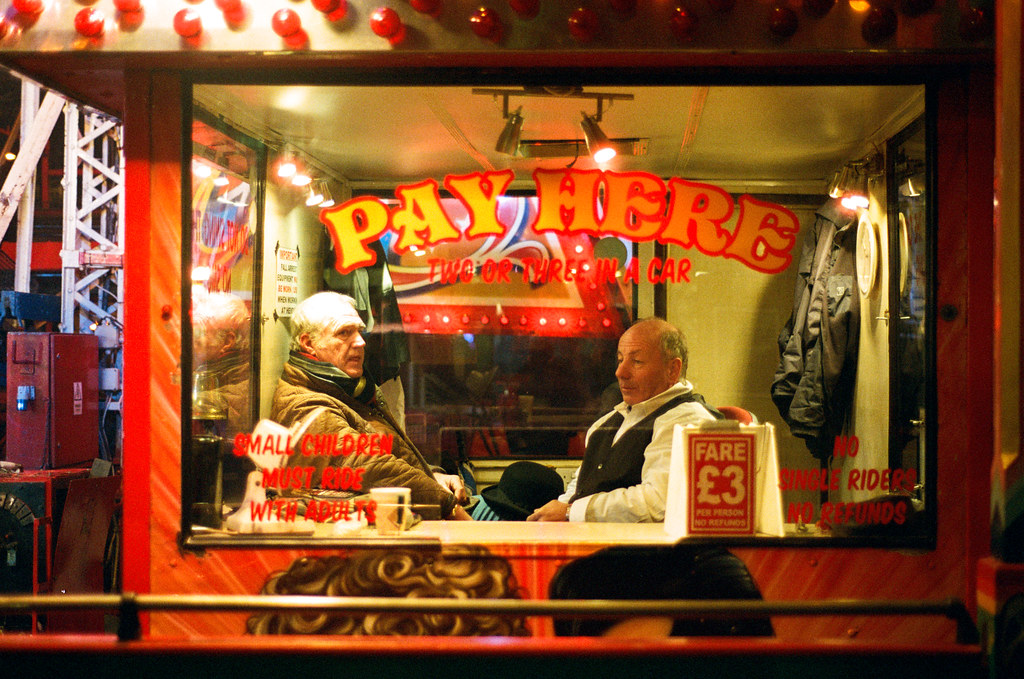 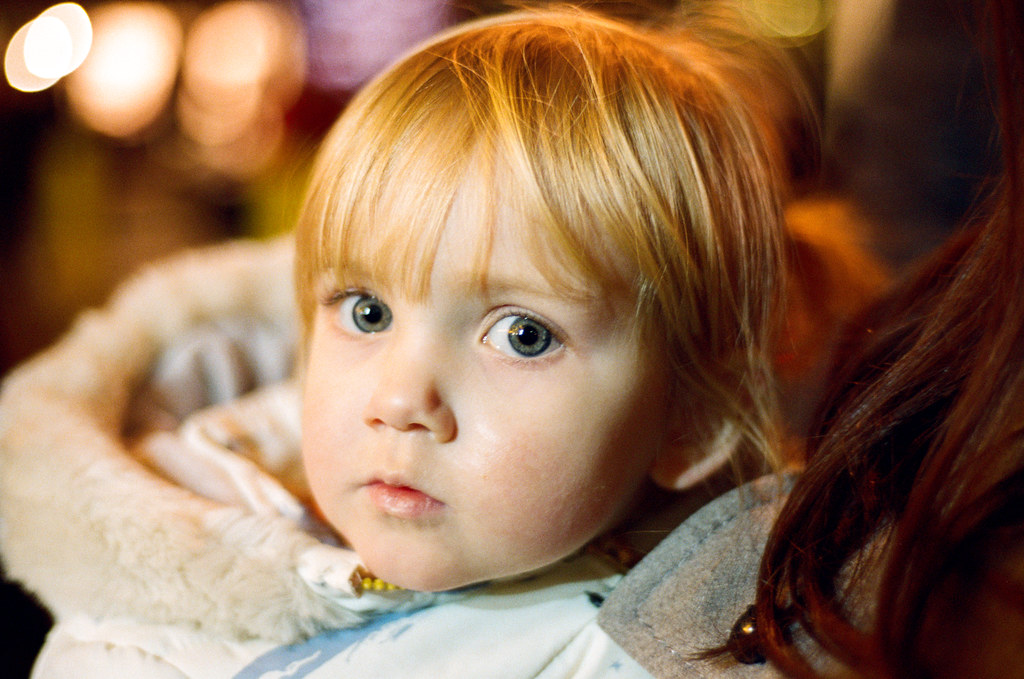 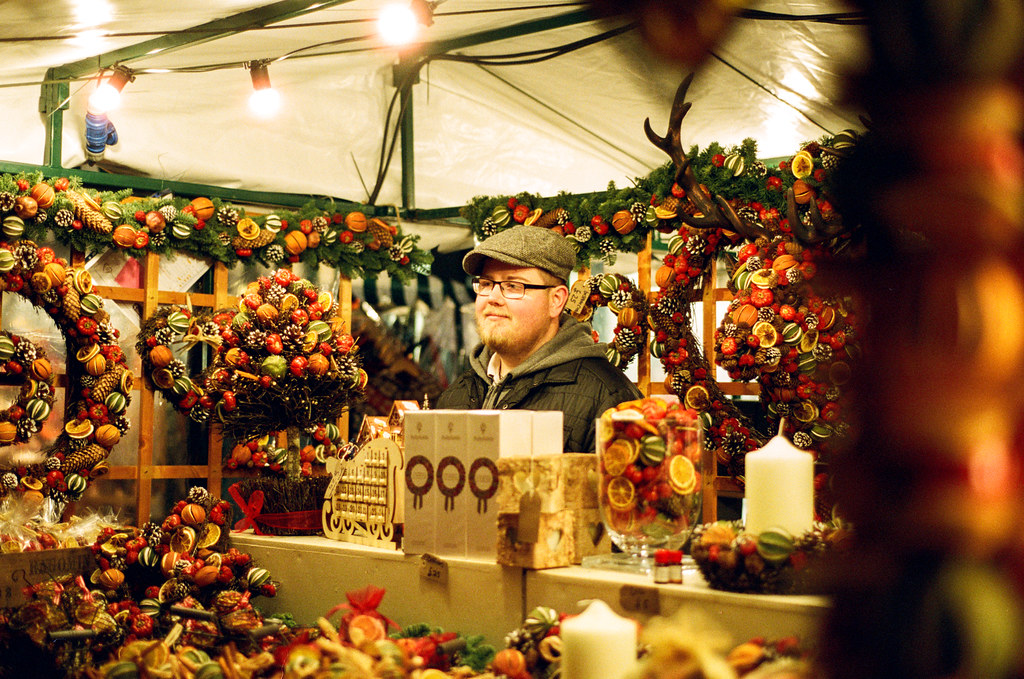 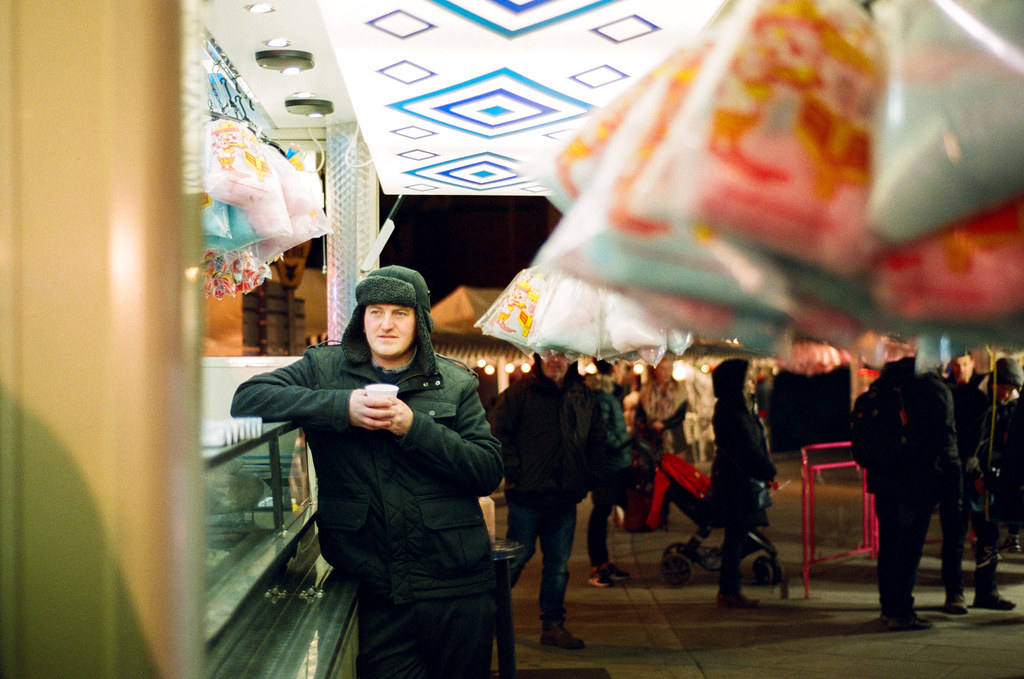 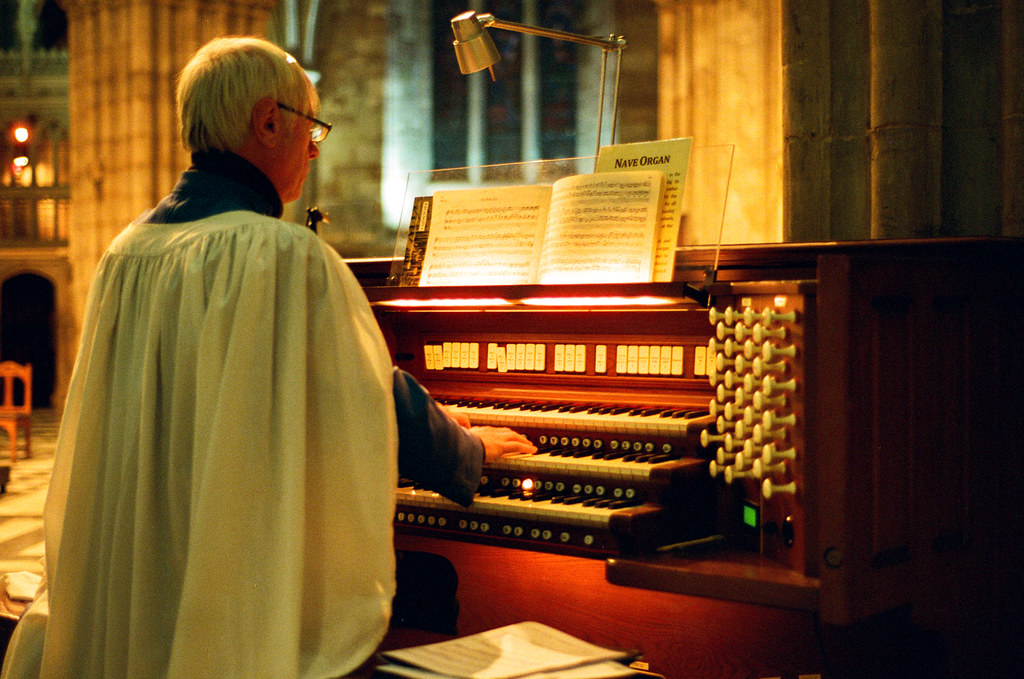 After the point & shoot joy I found in part 2, this was definitely not the experience I hoped to find here! I am aware that if I’d been able to set the metering pattern to a more simple one, and perhaps realised that I could switch off the focus assist lamp I wouldn’t have had as many issues, but ultimately I just couldn’t shake the feeling that I’d have been a lot happier and more comfortable with one of my manual cameras (read Leica M3).

Despite setting out to, I didn’t finish the roll at the Xmas Fayre either. As such, I will be back soon with some other thoughts on the experiences I had with the rest of this roll, specifically talking about trying to get used to using an SLR viewfinder again.

All posts from the project can be found here