I would imagine that by now most of you have heard that Kodak recently re-released their P3200 film. Soon after I heard the news I got in touch with them to ask them for a couple of rolls to shoot.

Early last week it turned up. Unfortunately, the Beers & Cameras meet-up where I’d planned to use my first roll of new P3200 on was the previous Wednesday to when I received it. Whilst it’s great that Kodak are bringing films back from the past, they haven’t invented a time machine to do so. As such I was out of luck shooting a roll of the newly released P3200 on the desired evening. Luckily, I had a single roll of out of date but cold stored old P3200 to hand to use instead.

I was actually given this roll for Christmas by my Emulsive secret Santa. I was told it had been cold stored and since it had gone out of date in 2011 I decided I’d do the same to this roll and put it in the kitchen fridge. I’d actually forgotten it was there. I don’t tend to buy much out of date or hard to find film, mainly because I agonise over what to use it for. That’s exactly what had happened here. I put it in the fridge, wondered a few times if I should use it for this or that event or evening out then had eventually completely forgotten about it. That was until the re-release was announced and it jogged my memory.

In a way, I guess it was a good thing that the new stuff didn’t turn up in time. Had a received new rolls I probably would have then agonised over the older roll worrying about whether or not I should shoot it and if it would have been up to scratch. Having the new rolls not turn up, and with me already being committed to the idea of shooting a roll on this particular night out, it pretty much worked out perfectly.

As far as I can see, there isn’t a great deal of difference between the results I’ve got from this old roll and the results I’ve seen floating around from the new stuff. I asked Em about it, and he tells me there are very slight changes to dev times between the old and new films but in terms of results he can’t see any difference either. It’s the first time I’ve shot a roll, so I find it hard to comment in too much depth about the results I got back… and even if I could, given the abuse I gave it, it’d probably be unfair for me to make any particularly specific comments about the results.

“…a multi-speed panchromatic black-and-white negative film. While the nominal film speed of P3200 TMZ is ISO 800, the “P” means it’s designed to be push processed to EI 3200 or higher. This film excels when shooting in low light or when capturing fast action. It is ideally suited for handheld street scene photography, night work, and in dimly lit venues where you can’t use flash”

Reading this little bit of text after I loaded the roll, as I was walking down the road on the way to the pub, the two key words that jumped out at me were “or” and “higher”. I knew I was going to a dark dimly lit pub, so figured why not push it an extra stop. If there was any impact from it being out of date, pushing it a stop would probably remedy that too.

By the time I got to the pub, it was still fairly light outside. I was shooting a borrowed Leica MP (review coming soon) with an also borrowed (likely soon to be mine) Canon 50mm 1.4. I didn’t find myself especially inspired when I first got there. The inside light of the pub was a bit poor, and the light from outside very muted. I took a couple of shots but didn’t have particularly high hopes. 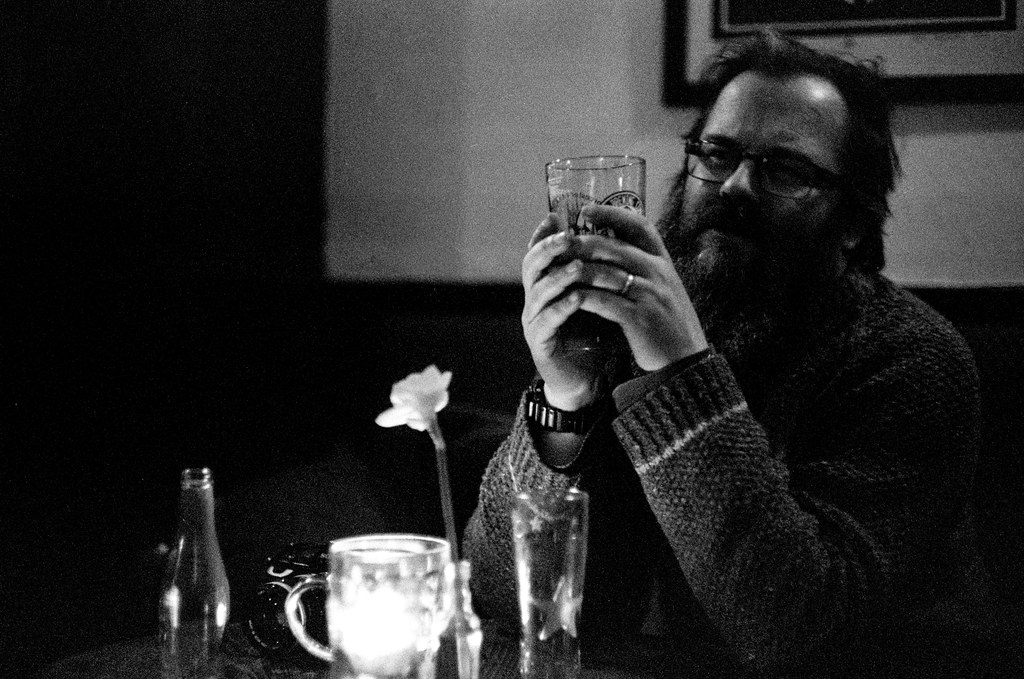 I figured I’d wait for it to get dark outside and hope that more interior lights would be turned on. As it turned out they weren’t. As annoying as that was, the 90’s Indy being played by some drunk people by the bar was more annoying still. As such we decided to shuffle off to somewhere else. One of our party isn’t exactly great on his feet, so we decided to go somewhere close by. One of the nearest places was a burger establishment by the name of Hanbao. It’s quite a trendy place and is, to say the least, quite dark. Unlike the previous place, it did have some fairly contrasty lighting… though let me just emphasis the fact that it’s really quite dark in there.

The booze must be quite strong too, as actually my memory of actually taking the photos is a little hazy. What I do remember quite well is my fairly slapdash approach to metering. What metering I did do told me that my planned push was going to be worthwhile, even shooting at 1/60th and f/1.4. I still received some fairly thin looking negs. 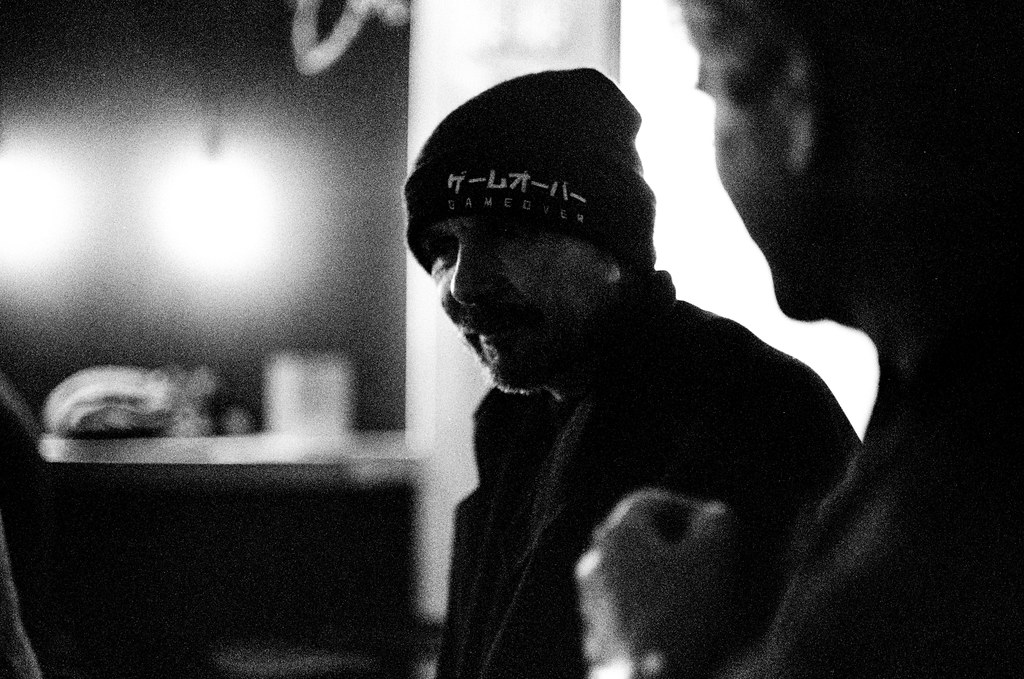 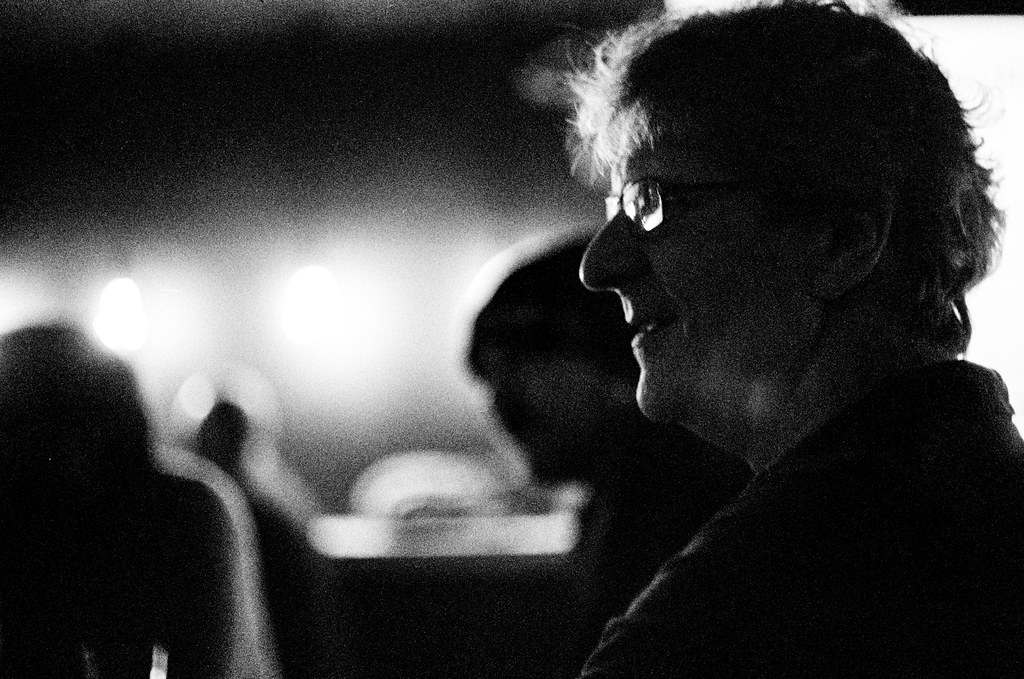 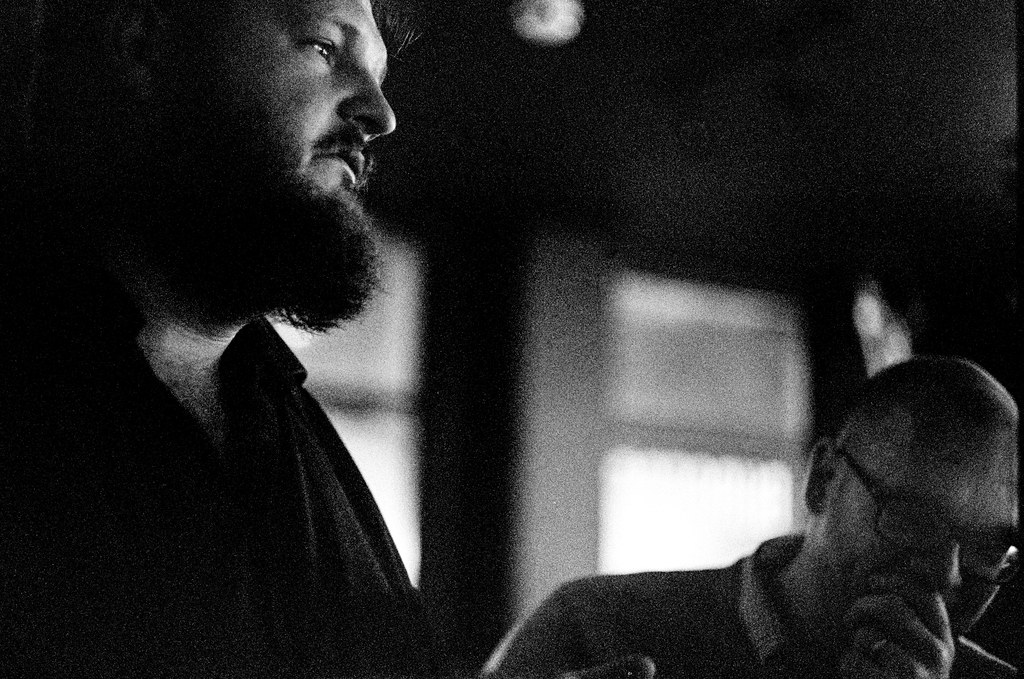 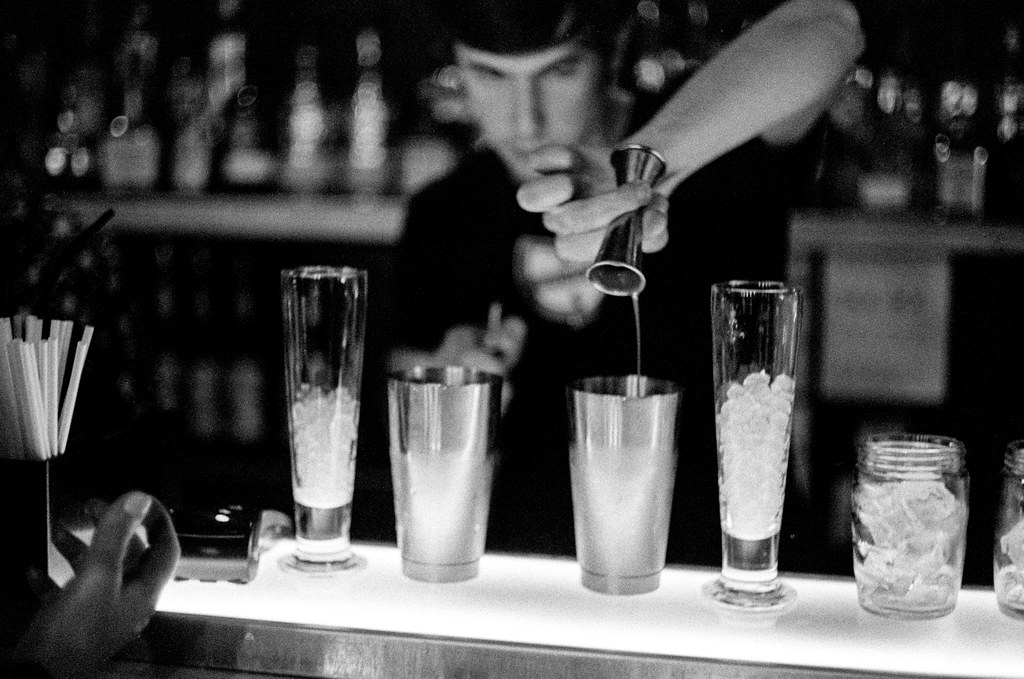 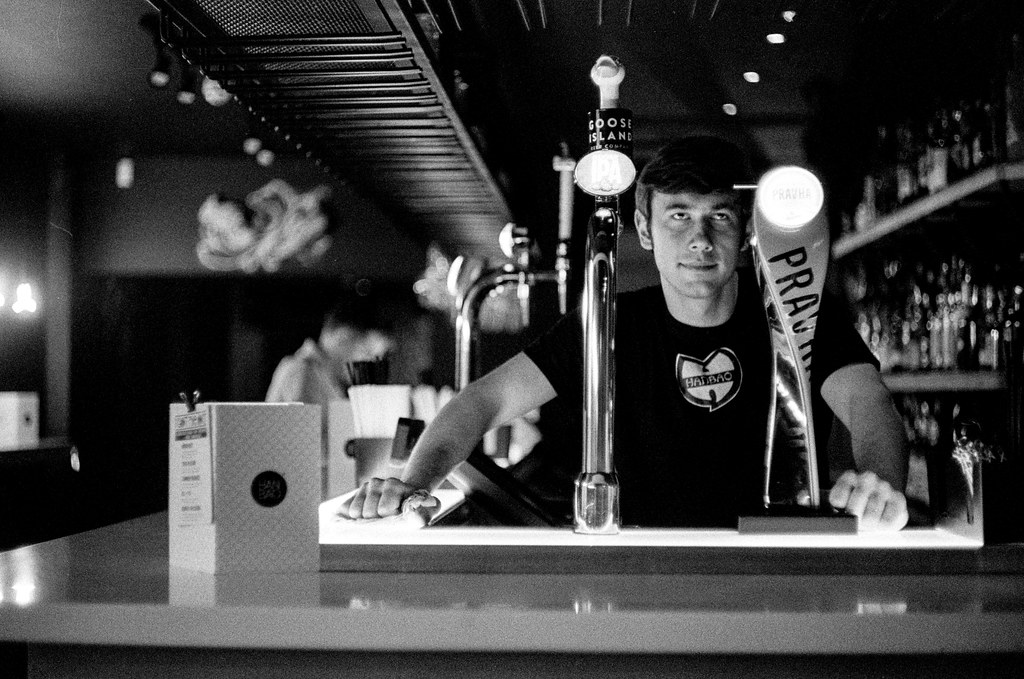 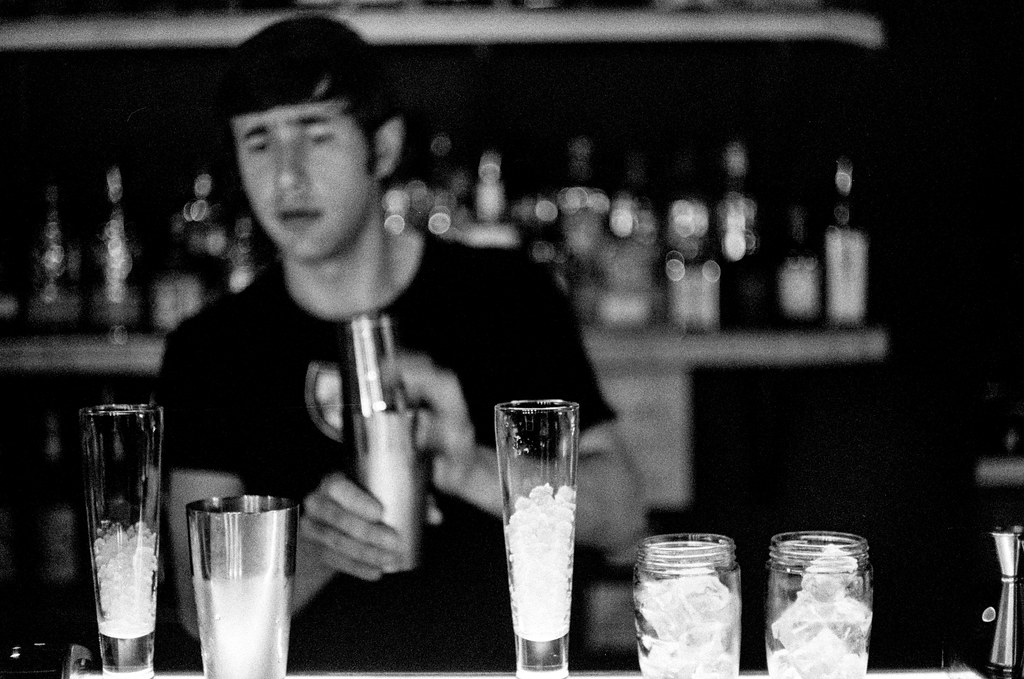 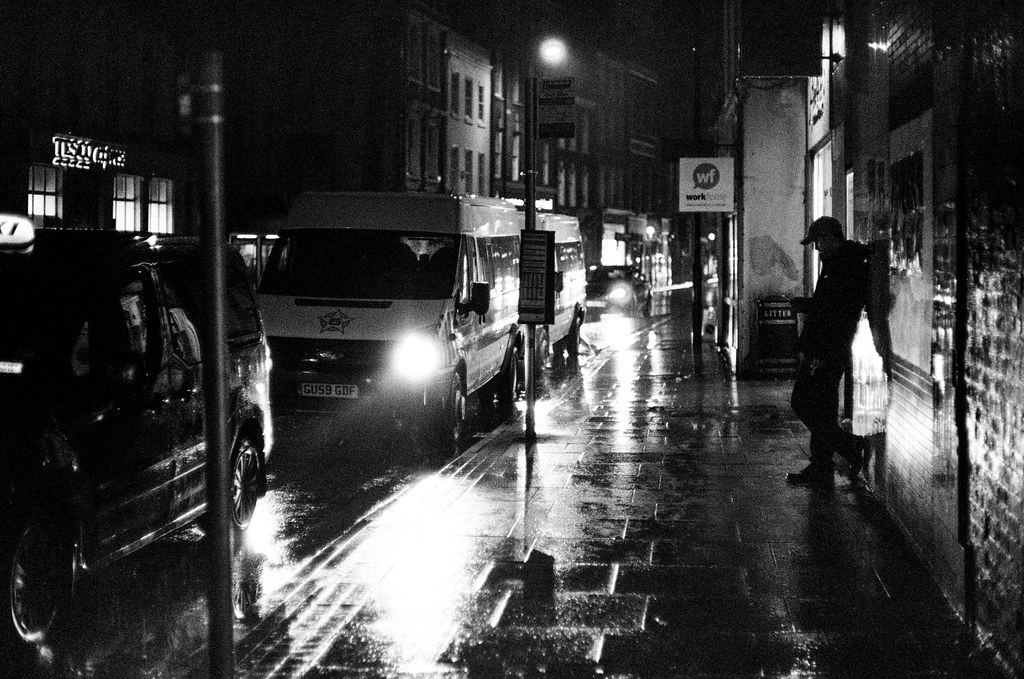 The frames in this post were all scanned flat with my Noritsu LS1100 then tweaked to taste in Lightroom. Despite the dark, despite me being a little merry, and despite the negs looking a little thin, I really like the results. I’m not the biggest fan of large grain, but it has a place, and for me this sort of subject is where it works best. That being said, I’ve now loaded my first new roll of P3200 into my newly repaired Olympus XA4 – I’ve taped up the DX code and I’m shooting it around ie800-1600 depending on the subject. I’m going to have it processed normally, and am really looking forward to seeing the results. 7 Frames with a Ricoh GR Digital IV – By Yul Vazquez