I have posted my initial impressions of the Fuji Klasse W here, this is a follow up to that.

One film in, and I would be lying if I didn’t slight have concerns. Not significant ones, and maybe more observations of limitations than concerns… but either way they are as follows.

The Klasse’s speed to focus is a little slow and there is some shutter lag. This isn’t something I wasn’t expecting, I’d read about it… But you kinda just expect people’s opinions (especially online) to be over exaggerated. They may have been a little, but it’s not as fast to photo as ideally I would like.

That said, I suppose the reality is that when evaluating a camera the intended use of the camera should be taken into account. I do want to be able to take photos of my daughter with it and she is pretty fast moving, but thats not really what I bought it for. 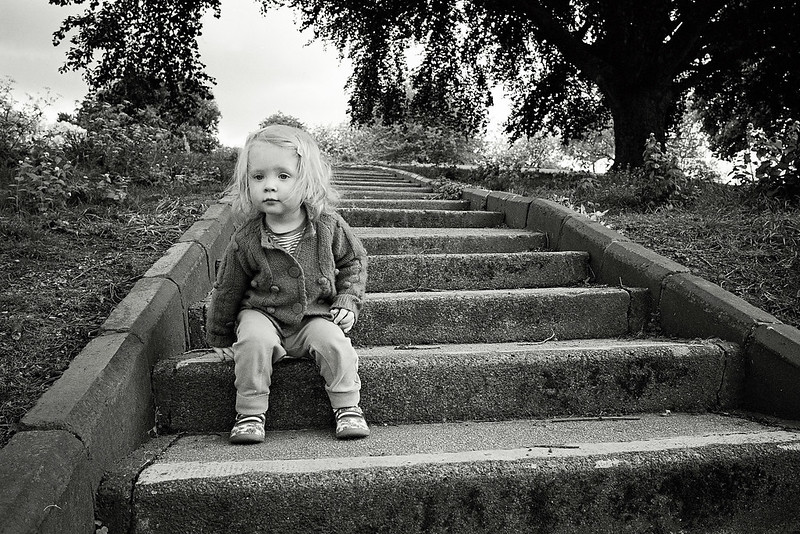 This picture demonstrates the lag, she was sat down when I pressed the button to shoot, in the time it took to focus and fire she put her hand on the step and started standing up.

The Fuji Klasse W was purchased to be my carry everywhere camera, the sort of camera I take when I go for a walk with the dogs, to town with the kid and missis etc. But also when I am out and about, intend to take some photos but can’t be bothered with carrying anything bigger… and that is most of the times I go out with intent these days. The best idea I can give of the sort of photography I enjoy as a hobby is from a recent trip to London (shots taken with the GR1)… That’s the sort of photography I wanted the Klasse for!

For the sort of photography the autofocus is more than fine. In fact in most of those shooting circumstances, at very least the outdoor ones manual focus would have been a perfectly valid option. I’ve not fully explored the manual focus on the Fuji, but it does seem it would speed up the shooting time significantly if I did feel I was missing those decisive moments.

One of the custom features (C4) on the Fuji Klasse W is the ability to set the camera to move the lens to the obtained point of focus before or after full press of the button. The first film I ran through it was set to before, this second film, after. I’m not convinced yet that either proves an advantage in terms of speed, but the camera does make some noise when moving the lens so it is perhaps sensible to limit this to a one off action should you be in a quieter environment.

This is of course a very easy to identify limitation of the Fuji Klasse W that became apparent to me as soon as I started using it. A slightly more difficult to grasp limitation is one I touched on in my initial impressions. It’s the cameras choice of shutter speed when on program (‘P’)… at least that’s the start of it…

I mentioned that the Fuji Klasse W prefers shooting at larger apertures. I worked out that the camera would only choose to open the aperture fully once there was a necessity to choose a shutter speed as slow as 1/4 sec. I have since found an English manual and discovered a page relating to this.
It appears it is happy to use f2.8 below 6.5ev. Take a look at this page and you can see the other thresholds.

Fine, as I said, this can be overcome by using the camera on aperture priority. The problem is, these thresholds change depending on the ISO of the film (or at least the ISO the camera is set to) … This threshold only relates to 100iso.

Additionally to this, what I didn’t realise is that 1.5ev less than this threshold and there is a limit on the Klasse’s ability to select an appropriate shutter speed. This limit is indicated by a rapidly flashing shutter speed reading inside the viewfinder. So, shooting at 100iso if the light is low enough to warrant a shutter speed of 1/2sec or slower, it can only choose 1/2sec. If a 1 second exposure is required, it can’t do it, it just rapidly flashes 1/2sec at you and if you do press the button it fires at 1/2sec. This is of course fairly far outside of normal shooting conditions… So is it why worth mentioning? Well, change the ISO setting and these lower thresholds of course change relatively.

With the change of sensitivity of film the Klasse W is effectively only more sensitive to the light, it’s ability to focus in the lower light doesn’t improve! So, with a setting of 200iso the limit of the ability of the Fuji’s meter comes into play at 1/4sec, still not likely to be an issue. But stop by stop this limitation starts effecting real life shooting. The following shows the the slowest shutter speed available at given iso settings.
400iso, 1/8th sec
800iso, 1/15th sec
1600iso, 1/30th sec
3200iso, 1/60th sec

So what is this limit? What causes it? As I mentioned before, at 6.5ev (100iso) the camera will choose an aperture of f2.8, and at 1.5ev less the camera hits this limit. You can see it on the graph, it ends at 4ev.
The graph ends a 4ev because that is the lowest light level at which the camera can read the light and if you have a look at this page of the manual, it is there in black and white. So why have I gone to such pains to explain all of this? Well, I had read that the meter had a range of 4ev – 16ev but didn’t realise how this translated into real life. I have also read forums where this is mentioned, but no answer was given. So I thought I would explain it. It has also taken me starting to write this article, getting a bit confused as to why this limit was coming into play, worrying the camera was broken and then finding the English manual to work it out for my self. By writing this hopefully I can save that from happening to someone else?

So what does this mean in real life, well, I’m not sure it means a great deal really. If I ever shoot in light as low as 4ev (100iso) then I’m probably either taking photos with a tripod, am geared up with a faster lens and/or have high speed film in the camera. If the later is the case I’m probably taking photos of people and probably don’t want to shoot lower than 1/60th anyway. The issue is of course, the camera can’t tell me how much slower than 1/60th it might want to shoot at should it be required… This is a distinct limitation for me!

Just a couple of other small observations: Going back to the subject of the point at which the Klasse W selects apertures. Once the film speed is above 400iso, the camera just refuses to use f2.8 when set to program. Of course the manual selection of aperture still remains. I just felt this limit was worth pointing out.

Also, in an absolute emergency, when that shutter speed is rapidly blinking at you the exposure compensation dial still works. Because of this, you could effectively manually select a slower shutter speed if required. I suppose you would have to be in a pretty desperate situation to want to do that though.

So, two limitations discovered, or at least understood to a greater degree. Focus can be a little slow, and this camera isn’t really geared up for particularly low light shooting. It’s not useless in, just not ideal for it … But then with a f2.8 maximum aperture lens, it was never going to be.

I hope my ramblings here make some sense, one of the attractions to compact cameras for me is the limitations they impose, I just find it useful to be fully aware of these limitations rather than get caught out.

As I said at the beginning of this post, my initial impressions of the camera can be read here.

Since writing this I have published my final thoughts on the Klasse W here.