Leica 50mm f/2 Summar Review – A lens with a good deal of character.

I very nearly didn’t keep my Leica Summar, in fact I’d almost decided to sell it before I’d even shot with it. First off, it’s an ugly little thing. Mine is nickel so doesn’t match the chrome iiia it came on, and looks ridiculous on my M bodies. Secondly, it’s not in that great condition. Looking inside the lens you can see the paint on the inside of the barrel has chipped away. And lastly, what with also owning a 50mm Summarit, another lens known for its divisive character, I pretty much convinced myself I didn’t have any need it for. Despite all this, it went off to the repair guy with the iiia, as much as anything else, just to protect the camera. I also figured there was no harm in getting an expert opinion on whether or not it was a good one. The answer that came back – “it’s ok, pretty clean”. He actually cleaned it further for me too, and didn’t charge me either which was nice. So by the time I got it back I felt pretty much obliged to give it a go… And I’m very pleased I did too. 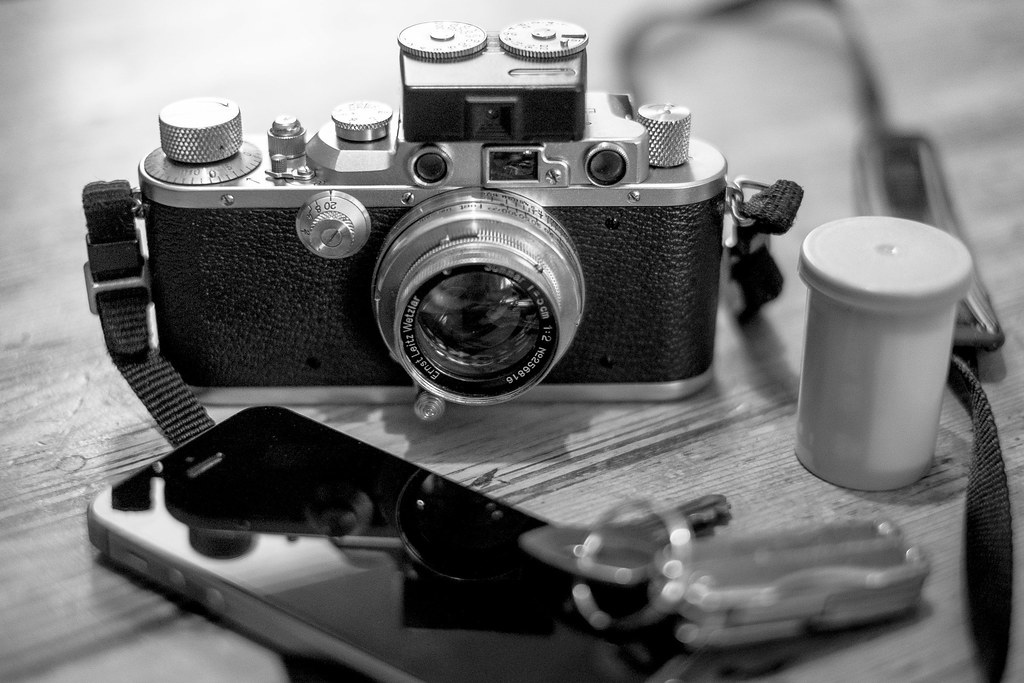 Earlier reservations aside, I did start to realise some of its potential. Its physical size for example does make it quite appealing, especially for a tiny camera like the iiia. A collapsible lens, it is in fact – at least as far as I can work out – the smallest 50mm f2 lens available for either Leica RF mount. It’s also thread mount, meaning I could mount it on any of my Leica cameras. The aperture control is also around the outside of the barrel of the lens, so compared to its smaller slower sibling, the 5cm/3.5 Elmar, the aperture is quicker and more convenient to set.

But is the Leica Summar actually any good?

The Leica Summar – an uncoated 50mm f/2 lens made in the 1930’s – is a lens that seems to divide opinion. Some say it’s far too prone to flare and imposes for too much of itself on the photo to be a genuinely useful lens. Of course there are an equal amount of people seem to love it for its character. The middle ground seems to be a suggestion to use a hood and stop it down for “best” results. My thoughts are fairly simple, if you are worried about flare or overbearing character, buying an uncoated f2 lens from the 1930’s is probably not the wisest course of action. On the other hand if like me you like a lens with character then, well, read on…

Surprisingly, as least to some I expect, even shot wide open this lens is incredibly capable. Results are impressively sharp, in the larger part of the centre at least. Not the harsh contrasty sharpness that modern lenses have mind, but detail is there. This combination of reasonable levels of resolution with lower levels of lens contrast make for amongst other things, lovely portraits I think. In this picture, taken at f/2, you can see individual hairs blowing in the wind. The detail is also all there in the Keira’s coat (left), but there is a gentleness to the textures rather than the hard high contrast sharpness of a modern lens. 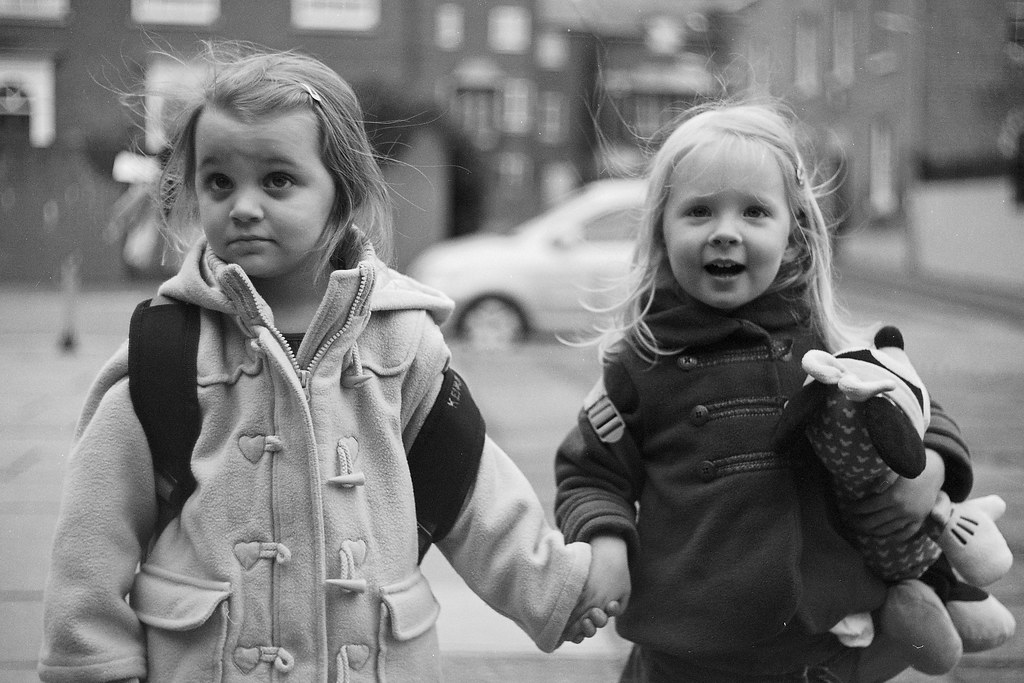 One of the things I really love about this lens is the way it renders the glow that you get around higher areas of a contrast subject. This next photo for example, if you take a closer look at the leaves and branches that are back-lit, there is a lovely gentle glow to the light. (Incidentally the bark of that tree Is another superb example of how much detail this lens can resolve.) 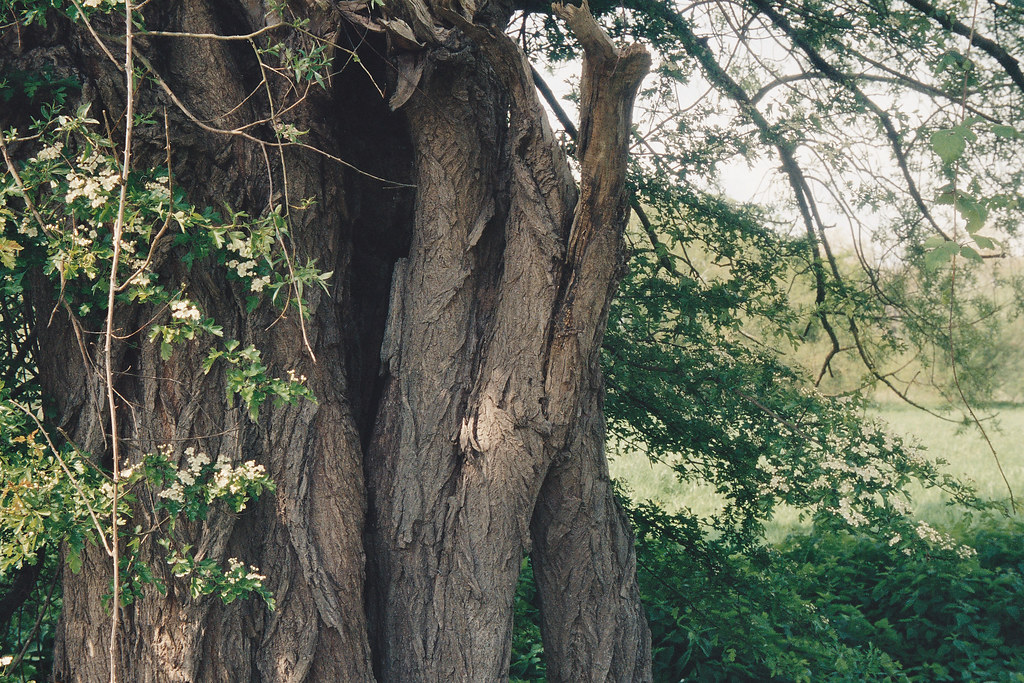 This same glow has a nice effect on artificial light sources too. The light glows, spreads or almost bleeds across the photo, rendering even in focus sources of light gently. 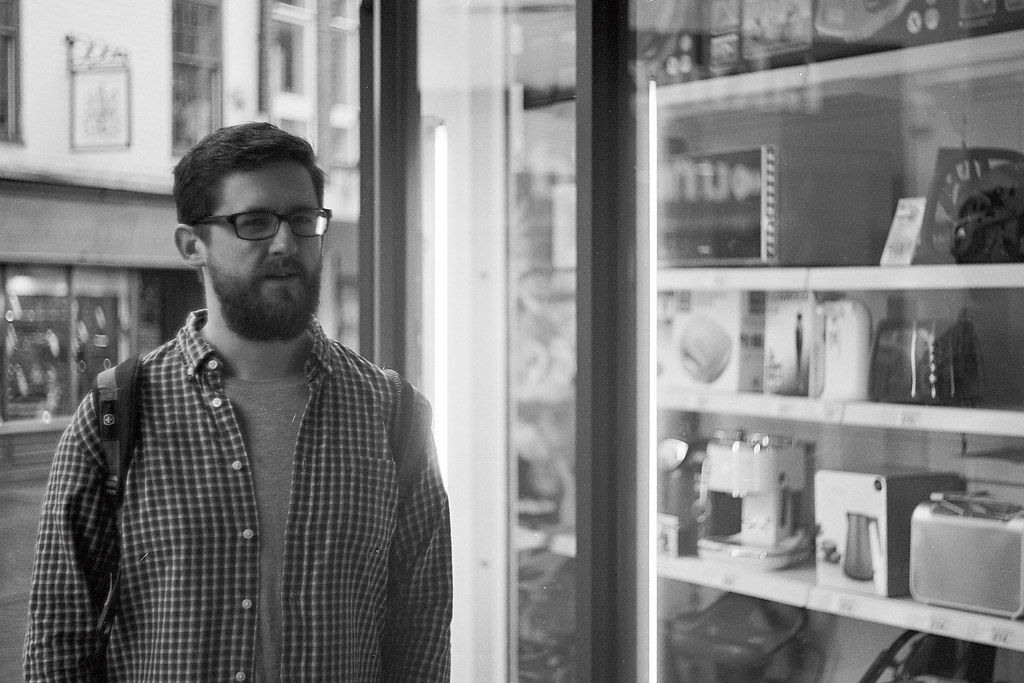 I find this glow particularly appealing when shooting in strong sunlight. Images take on a lovely warm summery feel to them rather than a harshness that can occur when shooting in contrasty bright light. 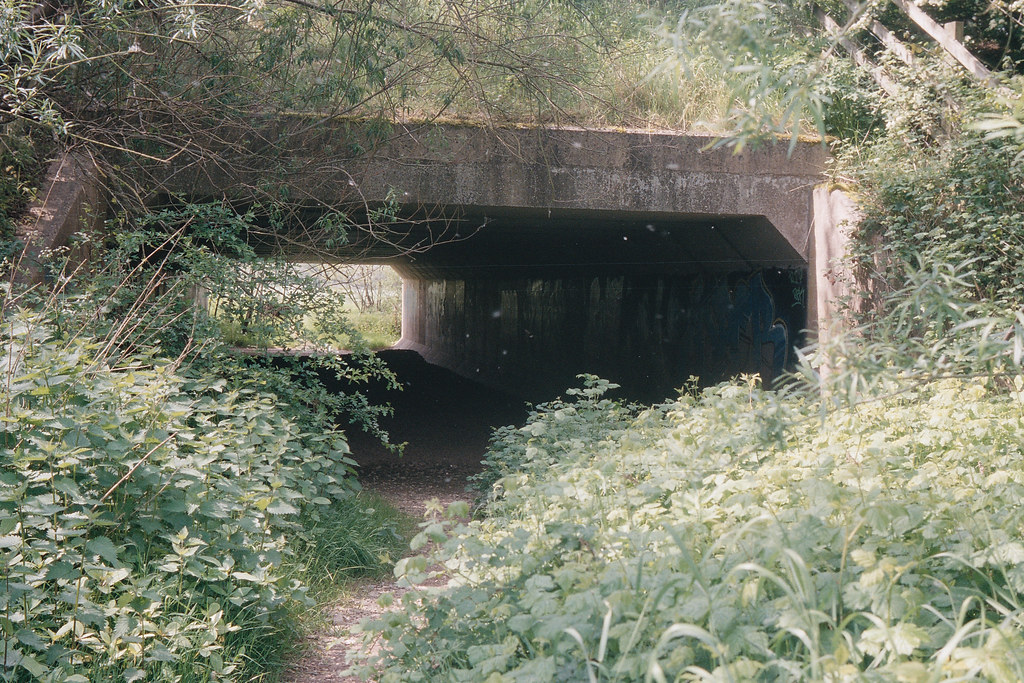 The glow and low contrast also work to give a very gentle rendering of subjects that are lit more diffusely. This is possibly my favourite image I’ve taken with this lens, I just find the combination of lens, the light and Kodak portra has worked very well to capture the mood I was looking for when I took this photo – though I should add this is largely down to luck on my part on this occasion. 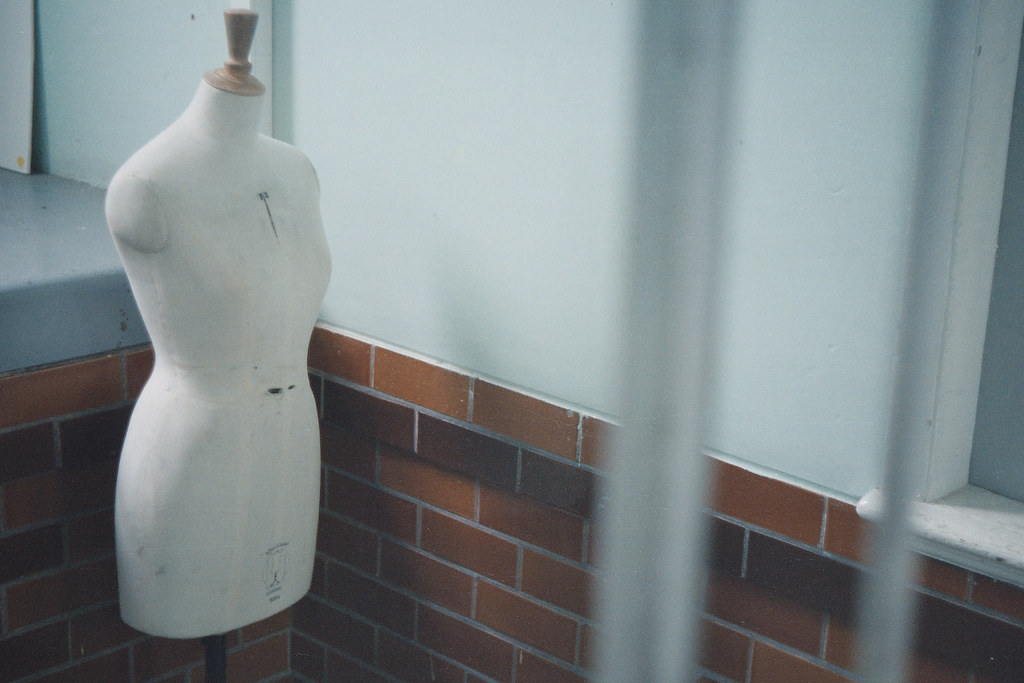 What’s also interesting about results from this lens, to my eye at least, is that whilst they are of a fairly low contrast, can have a glowy look and sometimes even look veiled; areas of shadow are rarely muddy or grey. If you can pardon my missing the focus in this shot, looking at Hannah’s cardigan and the door to the right, there is no muddiness to the blacks. Where some older lenses might render those areas much more grey, the Summar has rendered them quite dark – in fact, I think you could be excused for thinking this particular photo was taken with a much more modern lens. 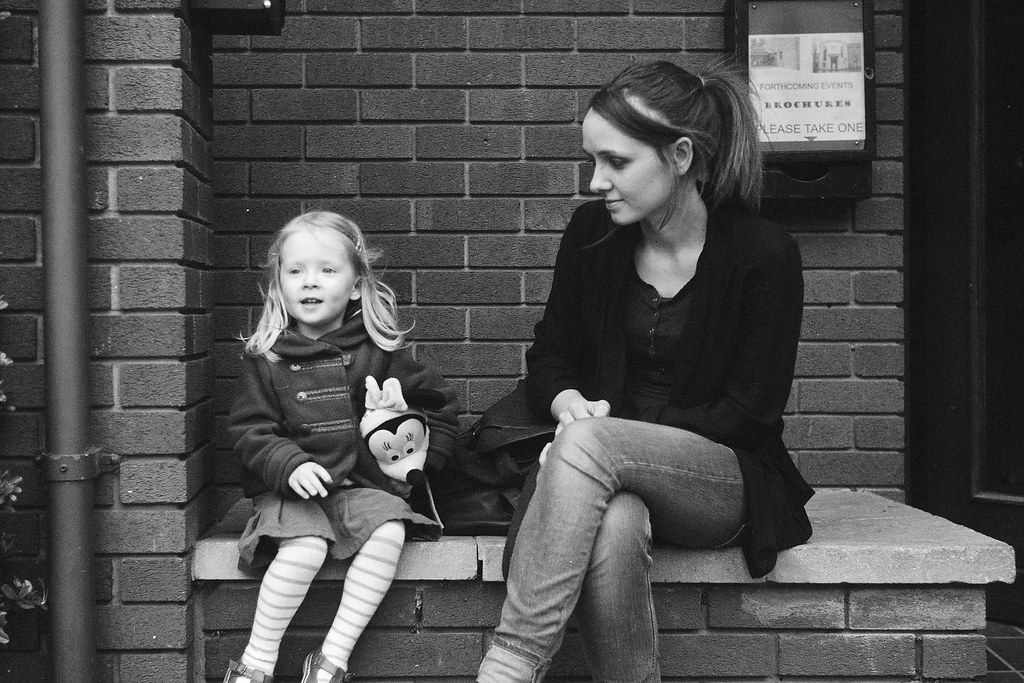 I also like the way it renders the out of focus. Others may disagree as there is a slight edginess (visible in the background of the photo of Greg by the strip lit shot window), and given the right circumstances judging by the shape of the out of focus specular highlights, things could start to swirl (see background of Connie and Keira holding hands). But these things are part of the charm for me.

Of course all is not a bed of roses when using a lens like this. In this photo the light seems to have caught the lens at just the right angle to wash out half the photo. 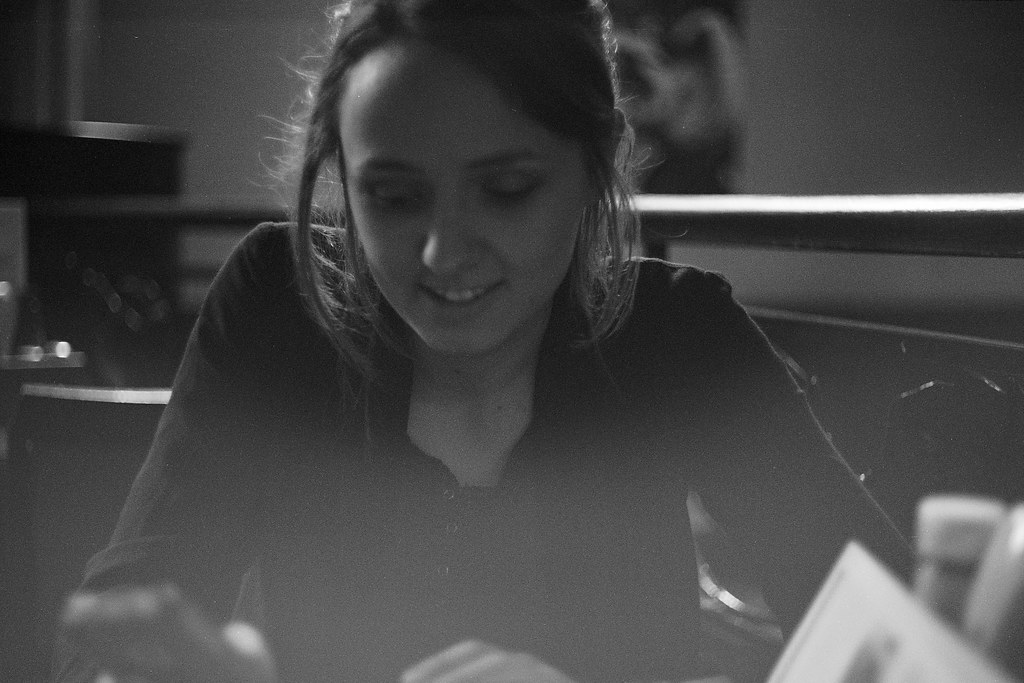 And even I and my fairly relaxed attitude to flare cropped this photo for a result I was happy with. 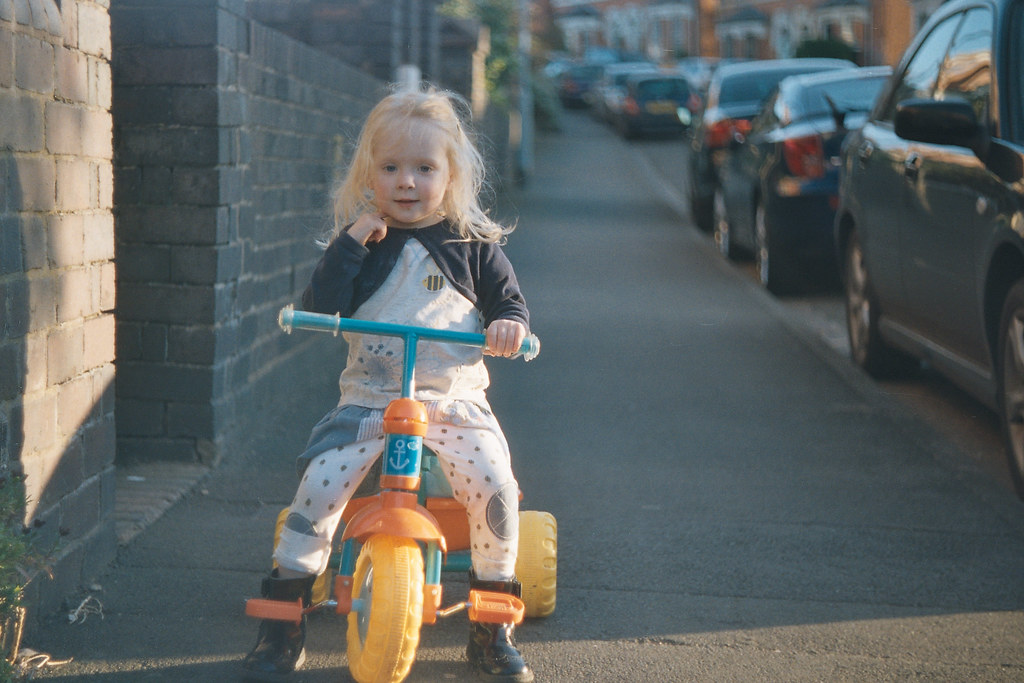 And I suppose that is where the middle ground view of for best results use a good comes from; use a hood and you probably will see an increase in consistency of the results. A hood would have probably solved the issues in both the above photos, and it probably would have reduced the veiling in the next photo. But I don’t think any amount of hood would make this lens completely consistent. 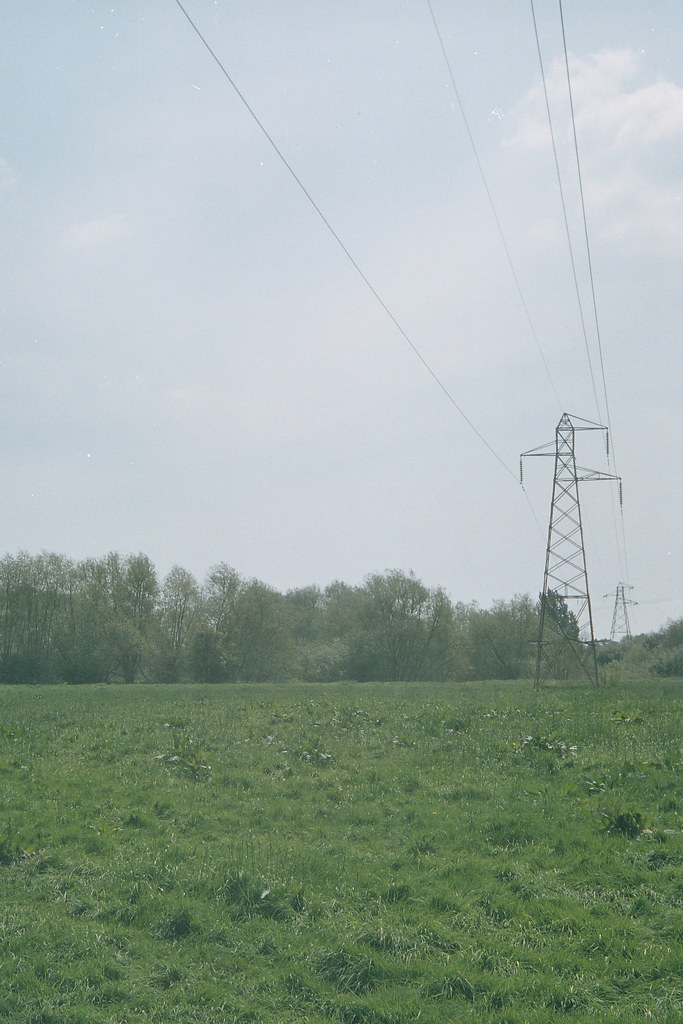 So what’s the verdict on the Leica Summar?

Well personally, I like lenses that have a bit of character and the Summar definitely fits in that category. Shooting with lenses like this, especially when they contain imperfections, introduces an element of serendipity. You can learn their traits, but unlike modern glass, these old lenses are much more prone to random acts of unexpectedness. Yes a hood would probably help, but as I say it’s not going to fix it. And anyway, to my mind, if I want more consistent results I can use a more modern lens. Shooting with a lens like this is about accepting, embracing and harnessing its “shortcomings”, it’s about using them for creative gain and not confusing them as fundamental flaws.

Ultimately, If you want modern, high-contrast-sharp images, then buy a modern lens. But if you are looking for something with a bit of charm, something to bring a touch of warmth and a gentle glowing rendering but want still retain a good amount of resolved detail, the Leica Summar – possibly the least expensive (to buy now) and least desirable leitz 50mm lens out there – might actually be the lens for you! I know I will be keeping mine!

A few more shots can be found here Minolta Lenses on a Nikon F3 in Iceland – by Simon King