I’ve had the Fuji X100v for a couple of weeks. In that time, the world feels like it’s changed… and no, not because of the camera. Fortunately, my reasons for buying the Fuji X100v haven’t changed, and actually with those reasons being largely around taking more photos of the kids in action – what with me going to be spending a lot more time with them in the weeks and months to come – I think I’m going to be getting a lot out of this camera.

In fact, I’ve decided I might do a little bit of a series of posts covering my experiences shooting the Fuji X100V. Going through the menus and options it offers, I don’t think I feel capable of writing any sort of comprehensive one-hit review. There’s just no way I could cover it all off in one post without sending myself loopy. As such, I think I’ll be approaching talking about this camera by writing something of a diary which I will conclude with a roundup post at the end.

I suspect just this hints at the some of my early thoughts toward it. It’s probably no surprise that I’ve found dipping into the menus of the Fuji X100V a little overwhelming. My ideal camera is one that has as little options, menus, buttons and a dials as possible. And there’s no getting away from the fact that the Fuji X100V is not really that.

Those who follow this website will also know that I didn’t like the previous X100F very much, and was actually inspired by its complexity to write a post accusing Fuji of losing site of the original concept by bloating it with features. You might therefore be wondering why now the 5th iteration of this camera has landed, I’ve decided to put my money down and commit to one of these cameras?

If there was one thing that really piqued my interest when I first saw the design of this camera, it was the reduction in and improved layout of buttons that adorned it. The biggest thing that frustrated me about the X100F was the massive amount buttons and the fact that for whatever reason I couldn’t hold the camera without accidentally pushing some of them. Everyone told me to just switch the buttons off, but with so many of them, that felt counterintuitive to me – it felt like I was going against the intention of the design, if that makes sense? Anyway, I won’t go on, you can read my thoughts on the X100F here if you want to. As I say, when the X100V was released, the first thing I saw was the fact that the d-pad jog dial thing was gone, the layout of the buttons in general was a lot cleaner and less overwhelming, and that the ‘Q’ (for ‘quick’) menu button has been moved to the side of the grip and sunk into the body of the camera. I could see straight away that I was going to find handling it a lot less clumsy. I was right too, in use I haven’t yet even once touched a button I didn’t mean to.

The other thing that had me enthralled was the tilting screen. I use Sony cameras at work, and have for quite a long time now become quite reliant on the tilting screens they provide. I don’t need this sort of functionality every day in my hobby, but sometimes when I want to take photos of the kids, I feel like I’m missing out by not having this feature. A camera for snapping the kids

And that’s really what this camera is all about for me. I wanted something that I could use to take photos of the kids in more creative ways. I’ll use it for other things, for sure, but it’s when snapping the kids that its features will be taken advantage of.

I think I’m some ways I’ve been spoiled by having the Sony cameras at work. For all that they drive me mad with their millions of features and functions, 3 generations in I’ve got quite used to them and have worked out how to harness some of their features rather than be overwhelmed by them. In fact, I’d go as far to say that I find that they allow me to be quite creative when I want to be in ways other cameras don’t.

The idea of shooting them for fun just doesn’t appeal though. For a start, they belong to work not me, but moreover I just associate work with them, rather than play. What I’ve grown to miss within my personal photography is just the sort of ease of shooting that they bring to the table. Sometimes the challenge is fun with the cameras I normally shoot my hobby with, but sometimes I just want to be able to have a creative idea when taking a photo of one of the kids that relies on super-quick eye-detection continuous-autofocus and be able to get the results without too much thought. As I said, I’ve been spoiled.

Which brings me neatly to my first results. The first time I took the camera out and used it in anger was to snap a few shots of Norah on the trampoline and playing in the garden. I’d not even begun to set it up to work how I wanted, so had to faff around in menus and click loads of buttons to work out how to get it into the right sort of modes.

Even now I haven’t mastered the AF modes, so certainly didn’t have a clue about which one to select then so just chose “All AF”, whatever that means. I switched on face detection, then continuous autofocus via the switch on the side. This combination of features and modes was enough to allow me to capture Norah in mid air at f/2 with absolute ease. 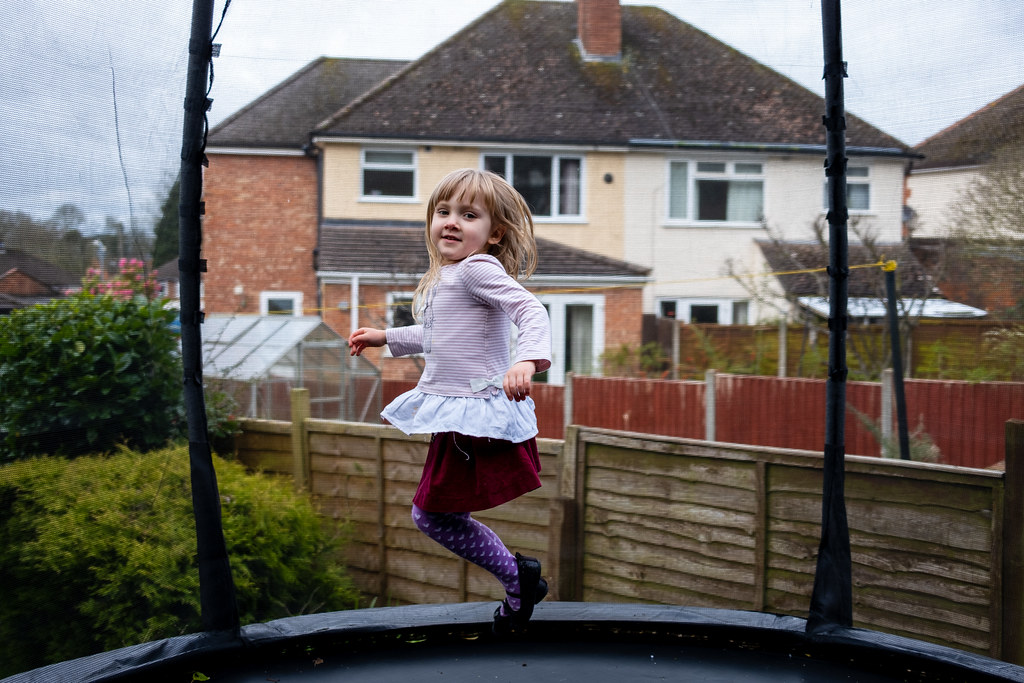 I then went on to get a shot of her scooting down the garden on her little bike toy thing (she looks stationary though, right?). 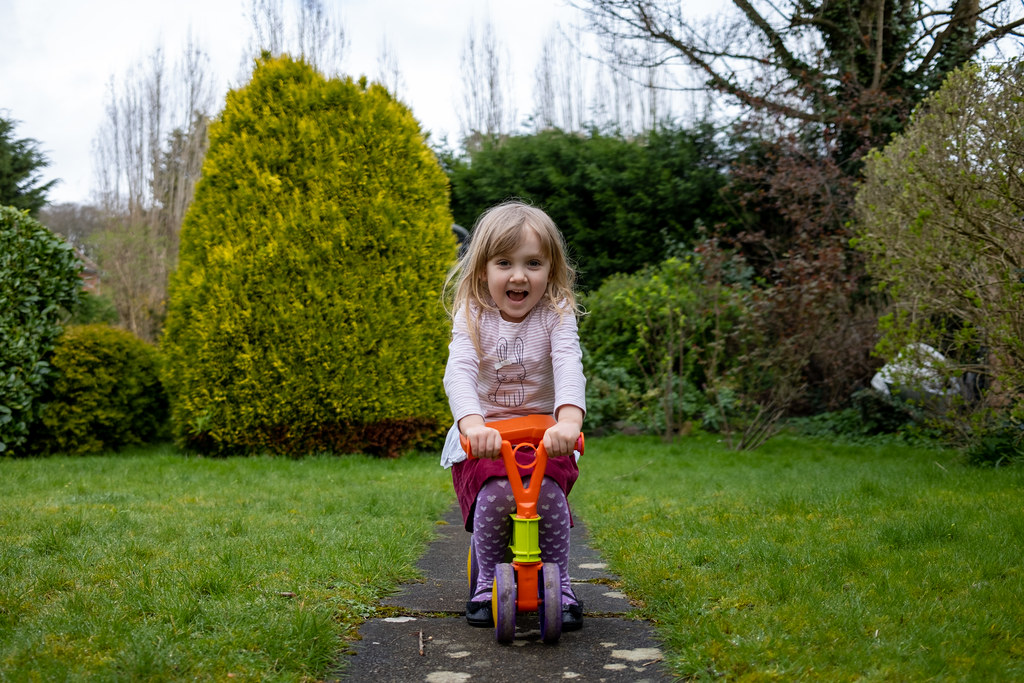 And another of her pretending to be on the phone – though of course, this one was a little bit less taxing on the camera 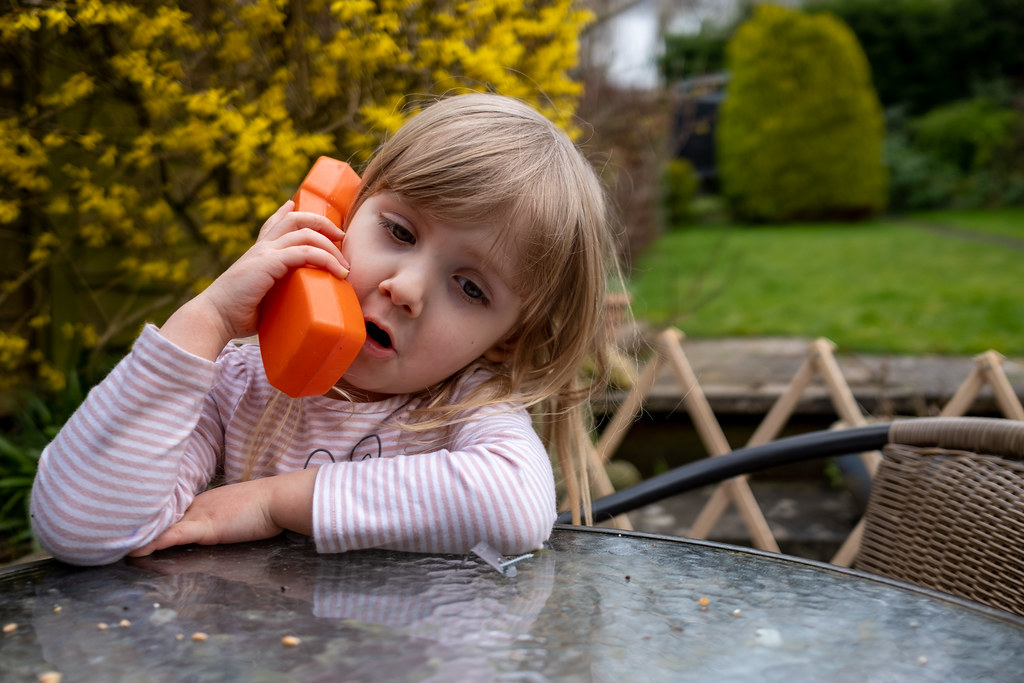 I was pleased with all these photos too. So pleased that I did some in-camera raw conversions and put them up on my ‘hamishgill’ instagram here, here and here. Though, ultimately, I wasn’t happy with the look of those. The photo above are Lightroom conversions I did later. I’ve decided that I’ll come back to all that in-camera processing and film simulation stuff later. It’s all a bit much for me to get my head around for the time being.

So as I say, the first photos felt like a success. Inasmuch as I did manage to find the modes I wanted in the menus and buttons without too much trouble, and the outcome was what I’d hoped for.

I did come away from the experience with a couple of fairly strong feelings though. The first was that I was very quickly going to need to spend some time customising the way the camera worked to get the most out of it, and the second was an idea I had for harnessing the Fuji X100V’s features to capture something of a lot more movement in Norah’s play in the garden.

I shall be back with my initial customisations to the camera and those results next time.