Photography—film photography in particular—brings a lot of heartache. Your eyes see something worth preserving and the final result never seems to capture it the way you remember it. Add in aperture, shutter, focusing, and metering and you find yourself pouring water into a bucket with a hole in it. It’s a miracle anything resembling fleeting moments are emulsified, but sometimes when the stars are aligned, you get something magical. At worst, you just get an image.

I started shooting black and white film 13 years ago in Ms. Iaquinto’s high school photography class. She had recommended Kodak Tri-X 400, if the local drugstore had it. Most kids brought back Kodak BW400cn, a C41 film, which she responded to with a faux heart attack. Some would bring Ilford HP5 from Cameta Camera (one of the few camera stores Long Island had) and she would be okay with that. No one had the gall to bring in Ilford Delta 3200. It was unfathomable and 99% of the class was just fulfilling an art credit anyway.

13 years later, I found myself wanting to try it. I had just moved to Manhattan and had been dabbling with Ilford HP5 in medium format, pushing a little here or there. Since you only get 12 shots to make magic in a bottle, I was eager to return to 35mm, especially without worrying about having so much daylight. Maybe I could even shoot the streets at night. As I paid for the 36 exposures at Luster Digital on Ave A in the East Village, something in the back of my mind told me I had just made a big mistake. 36 EXPOSURES, 3200? I must have been nuts. What could I possibly have to photograph? 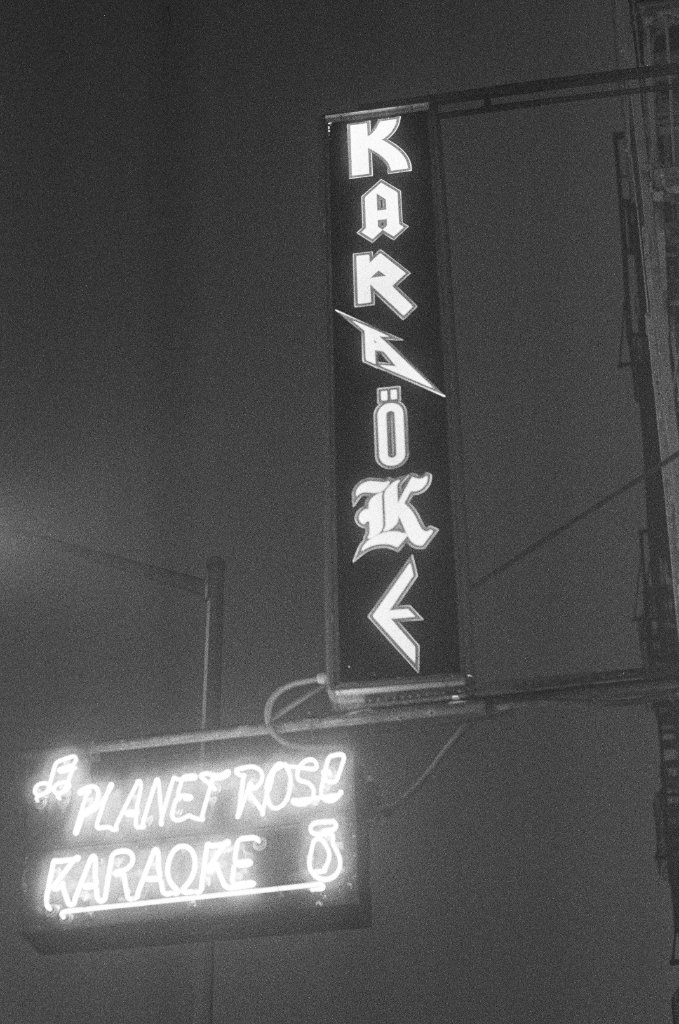 I actually discovered that the film is actually natively rated at 1000-1200, or maybe it’s 1600? I see conflicting information about this on the web. Regardless, I decided to shoot at 1600, a happy medium. I loaded up the film into my Minolta SRT 100, took the camera out to Tompkins Square park during the twilight hours, took a few shots to get started and there it sat in my camera for a few weeks.

Sometimes I want to try something so bad, be it a lens or a new roll of film, and it sits there for a while. It’s kind of like writers block, but photographers block doesn’t have the same ring to it. It was so daunting that I shot some Kodak Portra with my Bronica SQ-A while I searched for some inspiration. 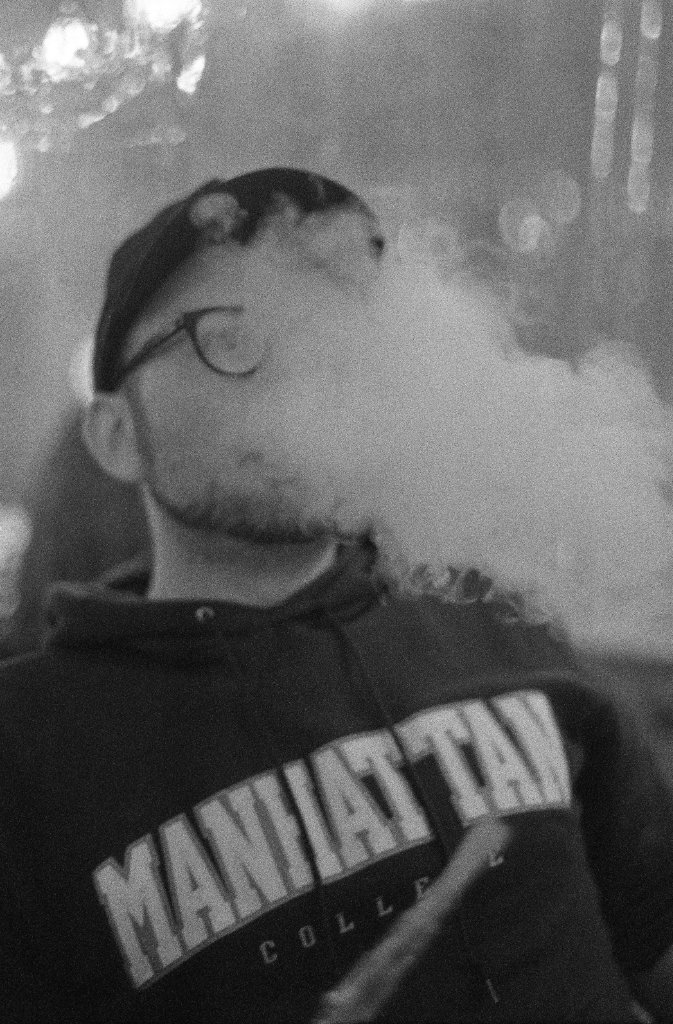 The idea was to shoot Robert Frank-esque stuff or at the very least something like the cover art of Lucinda Williams’s debut album, but all I got was a few smokey shots at a Hookah bar, some storefronts, and a neon sign. I got some shots of my lovely companion Brenna one evening while the sun went down on our sofa. Twas then, I figured I needed a change of scenery. Bruce Springsteen was returning to Broadway, so I packed up my SRT 100—along with my Vivitar 28mm f/2.8 (almost pancake lens) and the Rokkor 58mm f/1.4—and I headed uptown to the great white way. 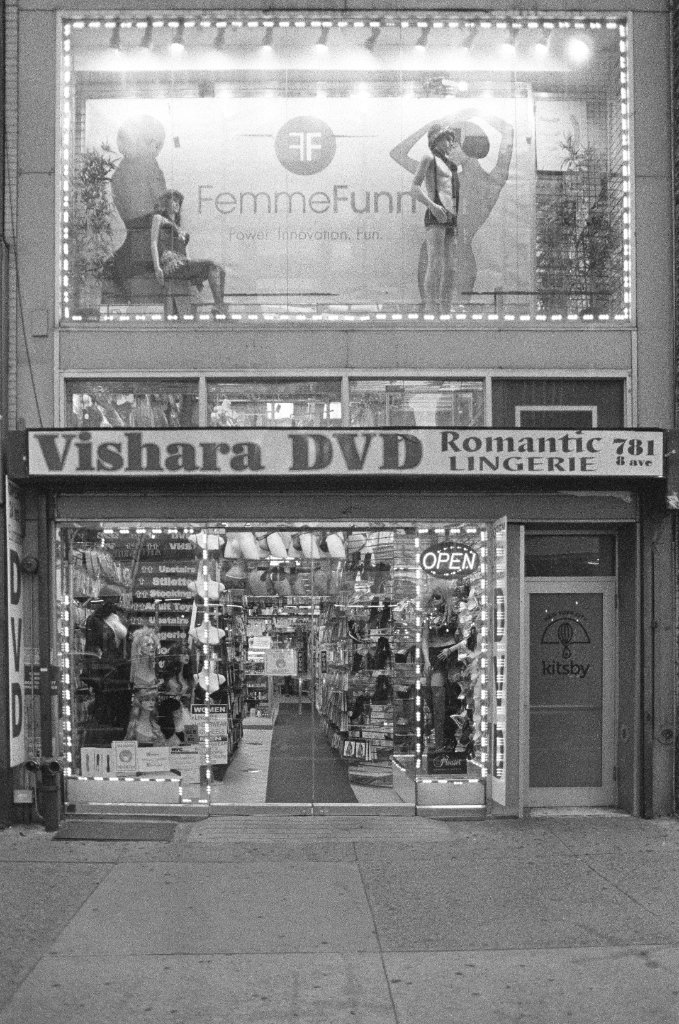 I walked up ninth ave at first. The funny part of the Disney-fied Times Square is that a lot of the adult stores and peep shows just moved one ave west. Due to the pandemic and rising rents though, very few of them remain. I still got a kick out of the few I could find, as well as the remains of the Copacabana. From the moment I snapped a block of stores with an Irish Pub on one end and an Italian restaurant on the other, I knew I was home free. When was the last time a Disney film was captured on film, let alone a grainy black and white stock? That must be why the monolith was flashing the words Evil at me while I headed towards the theater district. A cop on the beat couldn’t save me from the tourists and crushing capitalism of the projected signs. However, there is some comfort in knowing that one day Sardis will return alongside Jeff Daniels as Atticus Finch. And there’s the Boss, residing over West 44th Street in the distance. And with that final click, that’s it. The roll is complete. I wasted no time dropping it off to develop at Luster Digital and was pleasantly surprised to find images that had decent focus, framing, and exposure, let alone a tiny fragment of stardust.

Thanks for reading. You can find me on Instagram and I’m selling some prints here.