Back in late March I told you about my first experiences shooting Lomography’s new ‘Fantôme Kino‘ 8 ISO film. What I wasn’t able to tell you about at the time was that I also had the opportunity to shoot another forthcoming release, the announced today ‘Babylon Kino’ 13 ISO film.

Just as with the Fantôme Kino film, I shot this new Babylon Kino film with my Nikon F80. Again, I was keen to take advantage of that camera’s excellent evaluative metering system to ensure as close as exposure as I could to the stated exposure index. That being said, the Nikon F80 doesn’t do EI13, with the closest setting being EI12 – I figured erring toward overexposure would be better than under.

Of course, with this still being a very low ISO film, I still had the same issues with needing to shoot wide open to get acceptable shutter speeds. Though, with the film being 2/3rds of a stop faster than the previous roll I had shot, I did find usable shutter speeds slightly more readily achievable. It’s funny how when shooting this close to limitations, even less than a single stop can feel like quite a big difference.

When I received these two films from Lomography, I was sent with them a few notes on what to expect. As I talked about in my post about Fantôme, the notes attached that highlighted that it was a high contrast film. Duly, I went out looking for scenes that would make something of this fact. Conversely, the notes attached to Babylon talked of a lower contrast film. This made me think slightly differently about the sorts of shots I wanted to achieve. Luckily, the weather was similar on the days I shot the film, so you should be able to get some idea of the difference between them.

In fact, the first shot I took with Babylon was on the same day as the roll of Fantôme. I had finished the roll, gone back to the office, reloaded the camera and then had to fetch Norah from nursery. On the way out, I took the opportunity to grab this shot – I figured if it was lower contrast, I would get more in the shadow detail on the shaded side of her face and body. 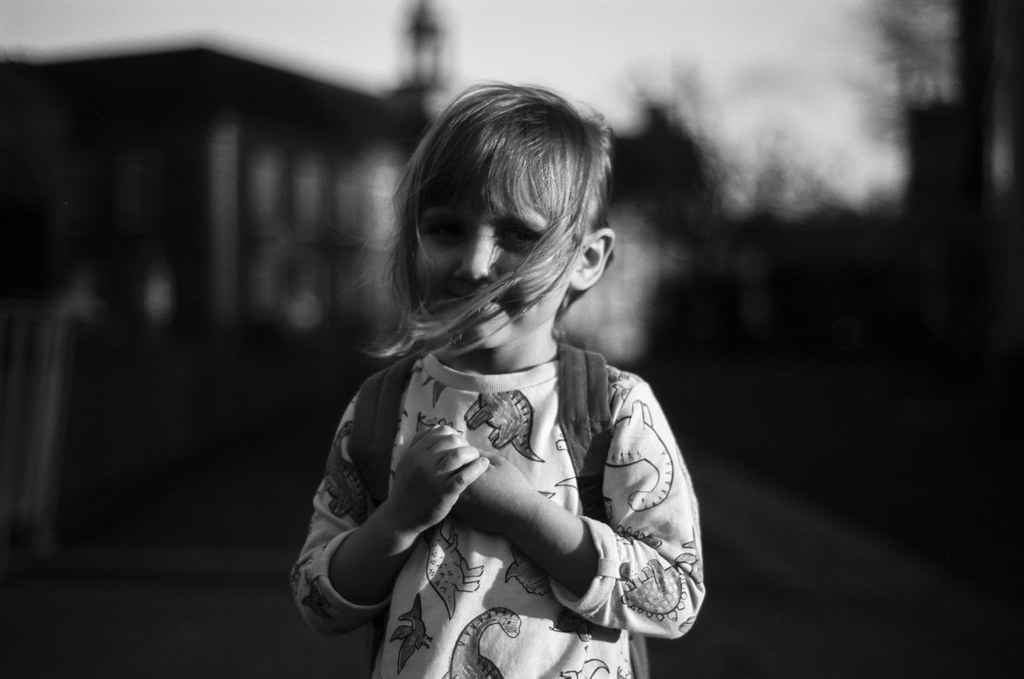 The next day, toward the end of the afternoon, I took the opportunity to return to the flooded river bank. On the way down, I spotted this building in varying degrees of shade figuring it might give me a good idea of how much contrast this film has. 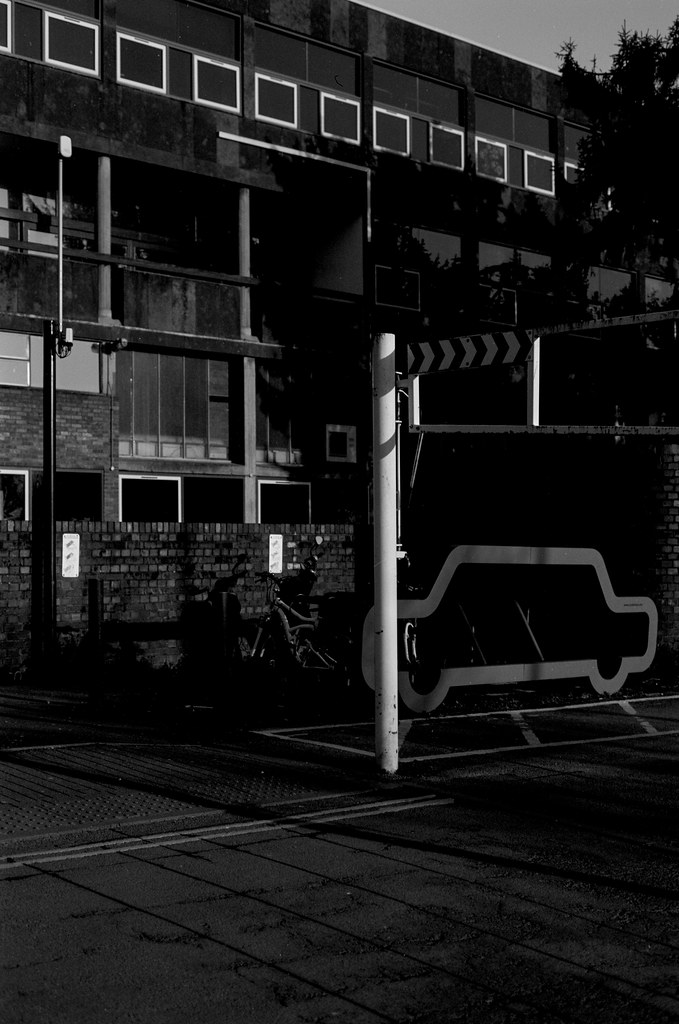 This next shot just felt like a must. These swans were all lined up enjoying the sunshine. I took a meter reading off the grass next to me, locked it in and took the shot. As I did, the two to the right started interacting in between me and the sun light. I had a feeling it would come out quite nicely. 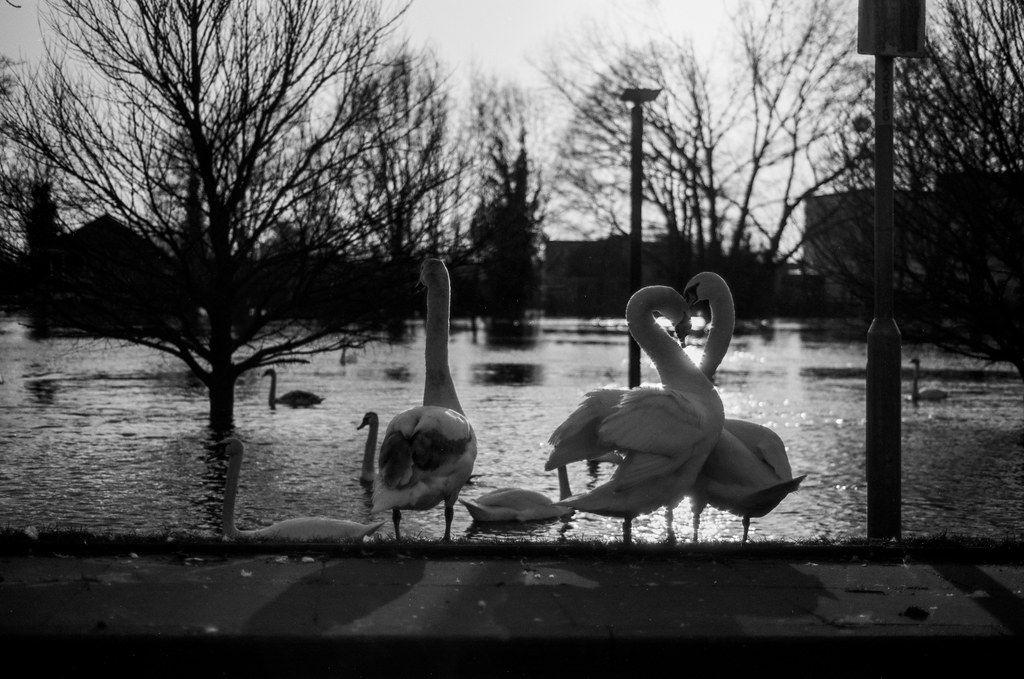 For my next trick, I thought I would take something more of a conventional landscape shot. I think I might have even stopped down slightly – I can’t entirely remember. If I did, it wasn’t much. 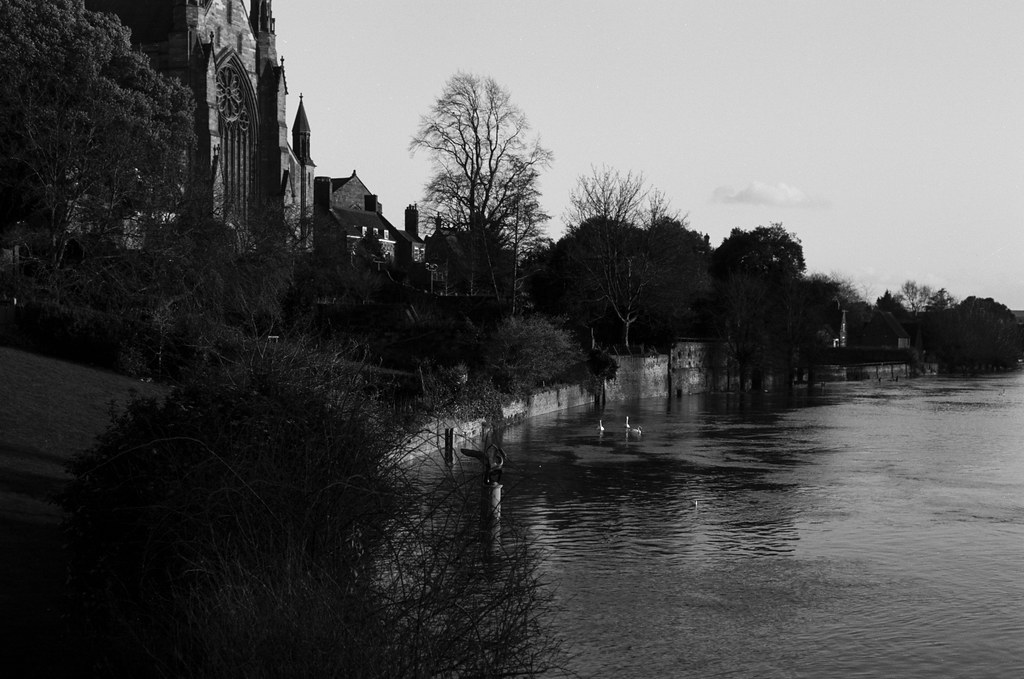 After a few more shots of nothing, I started making my way back up to the office. I really wanted to find some subject matter that would be tonally interesting and might take advantage of the lower contrast of the film. I first found this plant… 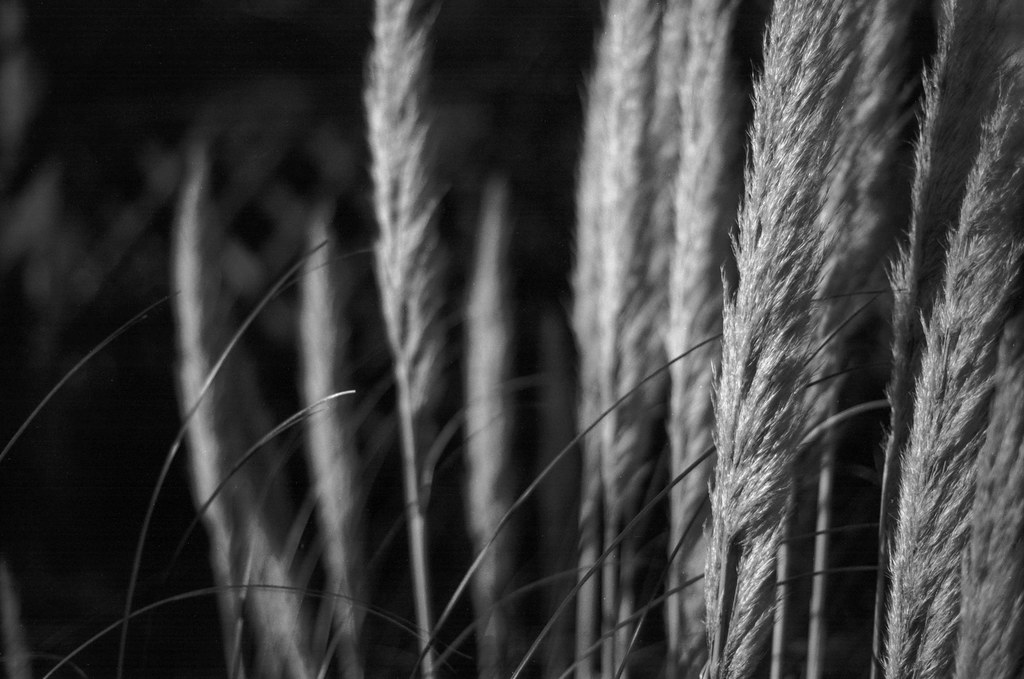 … and a little later this tree. I hoped the tree would also give something a sense of the resolution of the film too. 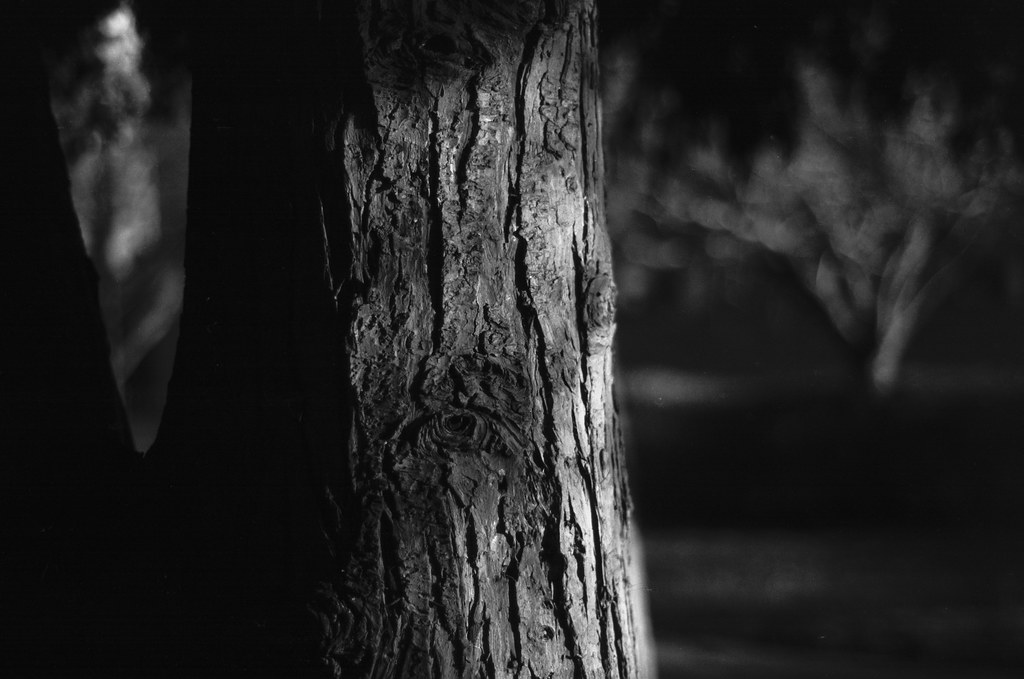 Between those two images I also took a couple of snaps with little thought. This first one was of this bench that but for the part of it that was reflecting the sun light was in the shadow of a tree. 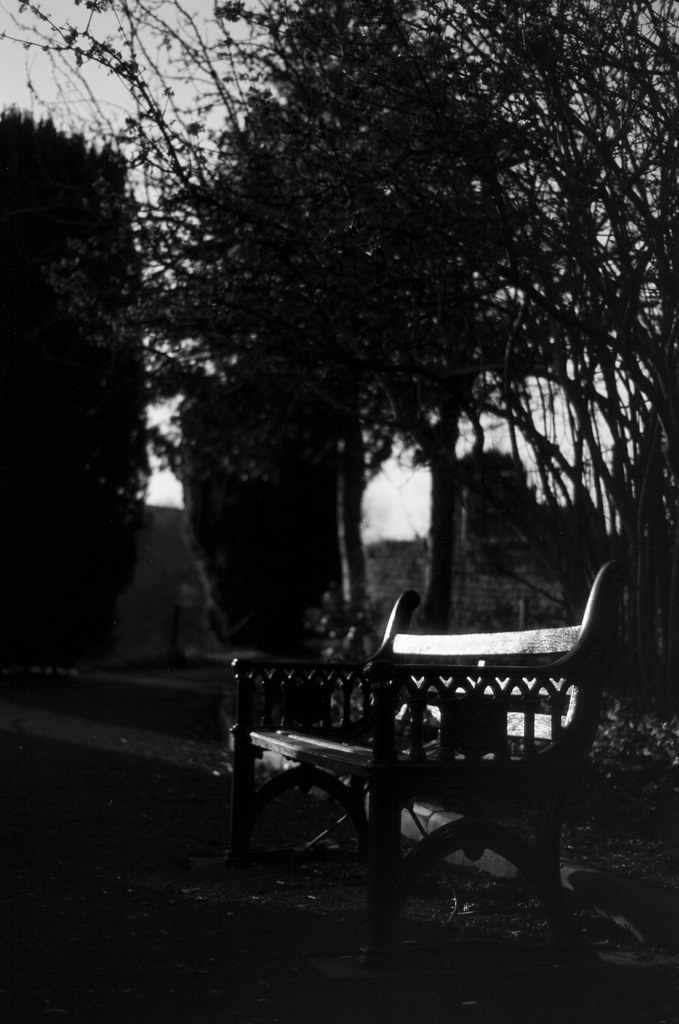 These early blossoms caught my eye too – I actually really like this shot, despite not being the sort to often photograph flowers. I think there is something in the tonality and rendering that I just find satisfying here. Like with the 8 ISO film, the 13 ISO film allowed me some very shallow depth of field even in the sunshine. 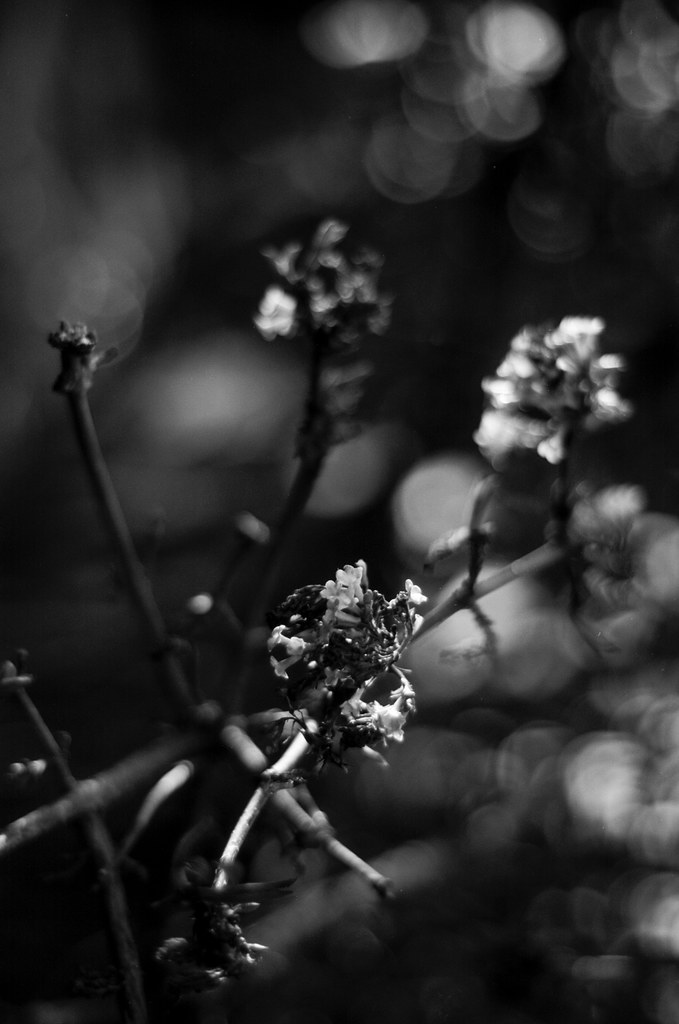 Now, it this stage you might be thinking that some of these look a little underexposed, despite me shooting them at EI12. In actual fact, I think slight underdevelopment is the issue as it was quite consistent across the roll. Just as with the roll of Fantôme, I sent it to be developed by Duncan at SilverPan Film Lab, the notes for the two films he sent back were as follows:

Despite this, I was not unhappy with the results at all. There certainly does seem to be less contrast to this film – even taking into account the apparent slight underdevelopment.  I also think this film might be more versatile, if such a statement can be made about such low ISO film?!

Just like Fantôme it certainly pushed me to think creatively when it came to the use of camera settings, though I perhaps felt it a little less limiting. The higher contrast film almost forced me to think about photos that would work with more contrast, here I was more concerned with the idea of harnessing what I expected to be a lower grain and greater shadow detail.

Which film would suit me better moving forward would definitely come down to my expected subject matter and desired outcome… but isn’t that in itself the joy of having all the different films we have to choose from on the market today?! To my mind, Lomography have definitely added something to that range of choices we have with these two films!

Coming from a roll of German cinematic production film, the Babylon Kino B&W Film has a high dynamic range and retains information in both bright and shadowed areas. It’s perfect for intimate portraits and soft storytelling scenes, rendering gorgeous light effects across candid close-ups too.

The Babylon Kino B&W Film is the fourth in our B&W Kino Film Family – our very special collection of multiformat monochrome masterpieces. Each family member has a distinct personality and renders images with timeless cinematic ambiance.

Lomography ‘Babylon Kino’ B&W 13 ISO 35mm Film has been officially announced today. It is available to preorder now with 20% off from final retail price. It is available for £8.50 a roll with expected delivery in July. You can pre-order the film in 5 packs here.