I don’t shoot film for the “serendipitous nature” of it. I know this is something a lot of people embrace and get a lot of enjoyment out of when shooting film. But for the large part, when I’m shooting film I’m not shooting it in the hope or expectation that something is going to go wrong, I’m expecting it to go right.

I must admit, I have been swayed in the past. I’ve enjoyed and embraced shooting some Lomography cameras – most notably the LC-Wide. I’ve even been swayed into liking some photos from a roll of film that suffered light leaks. I also don’t want what I’m about to say to take anything away from people who do enjoy serendipity in their film photography. I totally get why people would seek out processes that add potential for random or unexpected additions to their photography. As an alternative path to digital, it makes sense to me that some would enjoy these unknowns.

But for me, as I’ve said, 99.9% of the time, when I stick a roll of film into a camera, I have a good idea what the outcome is going to look like. In fact, more than that, the expected outcome is part of the enjoyment of my process.

Film photography, I would argue, has dramatically improved my photography process, and increased my enjoyment of it. When I used to shoot it as a kid, I remember framing photos with some expectation of the the outcome. Both positive and negative. I distinctly remember a school history trip to France as a child/young teenager with my Nikon RF-10 in hand. I remember taking photos of the various war memorials and having certain compositions in my head as I took them. They came out as I expected because I’d learned what to expect from that camera. I also remember when things went wrong with that camera too. I had a rudimentary understanding of exposure and the limitations of the flash for low light photography. So when I took a photo in a dark museum on that same trip I knew when I pressed the button it wasn’t going to come out. As expected, it didn’t. 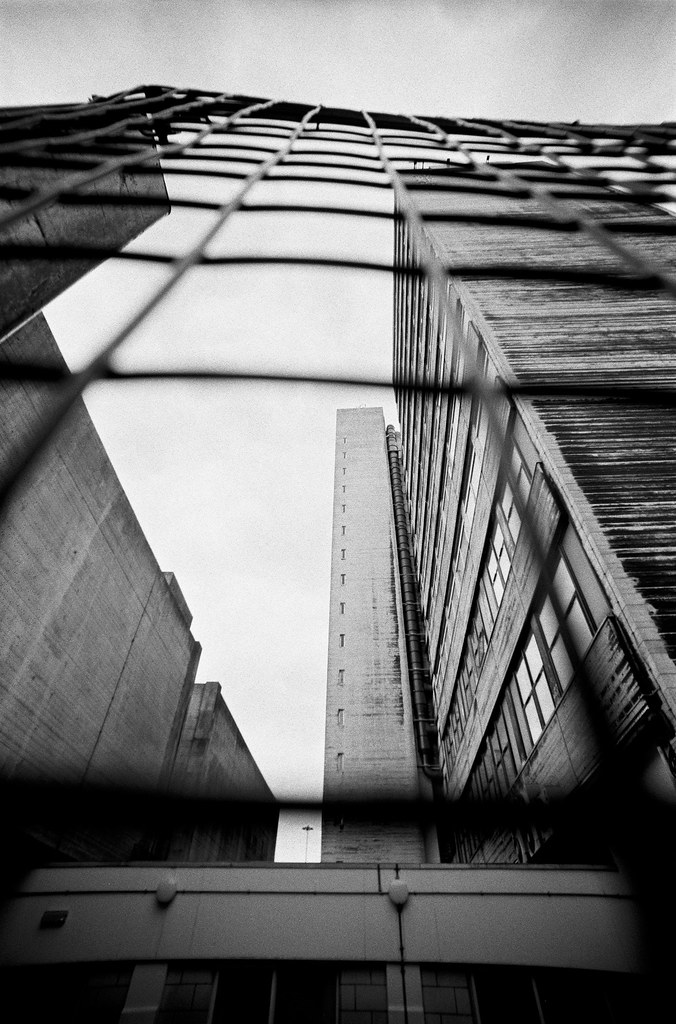 A shot I took with the Lomo LC-Wide without looking through the viewfinder – I didn’t 100% know what to expect, but love the result. A rare occasion I have embraced the unknown.

Jump forward to the digital era and my process got turned on its head. I was suddenly able to take photos without the need to think about the result too much. As long as I got something of my desired subject in frame and in focus, I felt that the creative process was only just beginning. When I got back to the computer I could crop, rotate, convert to black & white, change the colours, selective colour images in photoshop etc. etc. This sounds like fun in theory, and for a while it was, but longer term, it broke me.

I was reminded of this when writing about bokeh recently. Looking back at some of my images and writing about the frustration I suffered not really knowing how to get the most out of the lenses I was shooting for bokeh reminded my of the inconsistency of my results back then. Simultaneously experimenting with lenses and Lightroom trying to find some sort of style or at least look to images that I was happy with for my personal work was a nightmare. 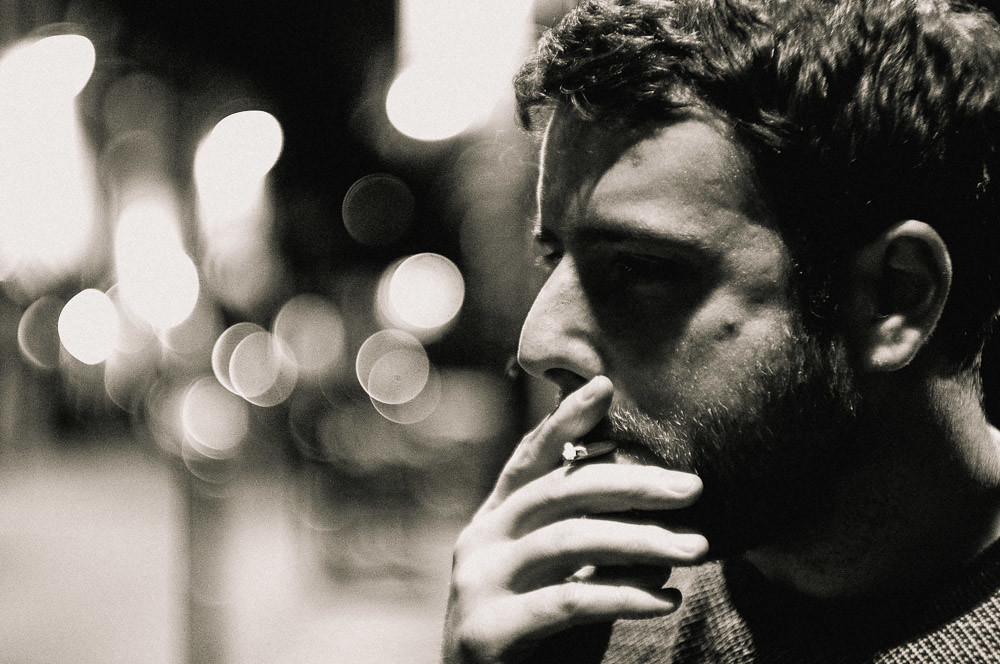 Taken with my old Trioplan – I actually don’t hate this photo, but I remember settling on this slightly toned look for a while before deciding I didn’t like it anymore and moving on.

Then, as I have recalled a few times on this website – not least in that recent article about bokeh – I had an epiphany when I shot a Yashica T5. It simplified everything for me. It took away lens choice, and by choosing Ilford XP2 as I most regularly did, for a large part it took away image processing choices. In fact, it all but took me back to how I’d shot as a kid. Once again, I was shooting for composition and very quickly got to the stage that I pretty much knew what the outcome was going to look like as I pressed the shutter button.

In short, film photography helped me rediscover pre-visualisation. I’d learnt it as a kid, then lost it as a mental process within my photography to an ever-increasing degree through too much experimentation with digital. By shooting how I shot as a child again, I was able tap back into a process that felt right to me.

I’ve talked about this before too. I think of the photographic process that suits me best as being linear. I choose a subject, choose a film, a camera (or just digital camera) and lens that I think is right for that subject. I lock that look in my head, go out and shoot, and then I only subtly process the images to match the idea I had in my head to begin with. (I talk about my black & white and colour film workflow here and here respectively if you’re interested)

Film photography has even impacted my digital process to the point that I rarely convert digital to black & white from colour files. This was one of the reasons I enjoyed the Leica Monochrom so much. When I chose to shoot it, I was choosing digital black & white and I found that very satisfying. I’ve sold that camera now, so if I convert to black & white after the fact, it is something I lock in mentally before I even press the shutter button.

My work is more consistent too. It’s not as consistent as it could be because I shoot so many different cameras and lenses for this blog. But for the most part I’m happy with the inconsistency because I am choosing it, and more importantly pre-visualising it. I have some idea how a lens, camera or film is going to impact on the results before I start shooting, so I’m comfortable with the outcome.

I even have to remind myself sometimes that the goal isn’t always about perfect results. Sometimes is can be about lower quality results, or results with a colour shift etc. But whatever the outcome, I’m only really properly happy as long as the photos are within the scope of my expectation. I want my pre-visualised images to come to fruition! In short, I have practiced a sense of consistency, and have have done so to the extent that I’m programmed to it as a process.

So why am I telling you all this? Because it goes a long way to explain why I am so gutted at the outcome of a recent roll of film that I very nearly binned the camera. In fact, I did put it in the bin… I just took it back out again after I realised I was being a little bit irrational.

We recently had some snow, and after summoning up the courage to brave the cold, me and Hannah took the girls out to play in it in the back garden. The plan was to have a snowman making contest. Me and Connie vs. Hannah and Norah. Before we went out, I knew I was going to want to take some photos. With it being cold I didn’t want to be faffing around with a manual camera so I loaded a roll of Colorplus into a Pentax MZ-3. I’d not shot the camera before, but was comfortable shooting it as I’d previously shot and reviewed the MZ-5 which is basically identical. I know what Colorplus looks like now too. In fact the only variable in my mind was a 50mm AF lens that I hadn’t shot at all before. But it’s not like I am unfamiliar with the focal length and had inspected it and knew it was functional so I was confident in using it. I set the exposure compensation dial to +1 1/2 to deal with the snow and then relied on the autoexposure knowing from experiences with the MZ-5 that I could do so without fear of it falling over. With all this in hand, I had every confidence in the outcome… 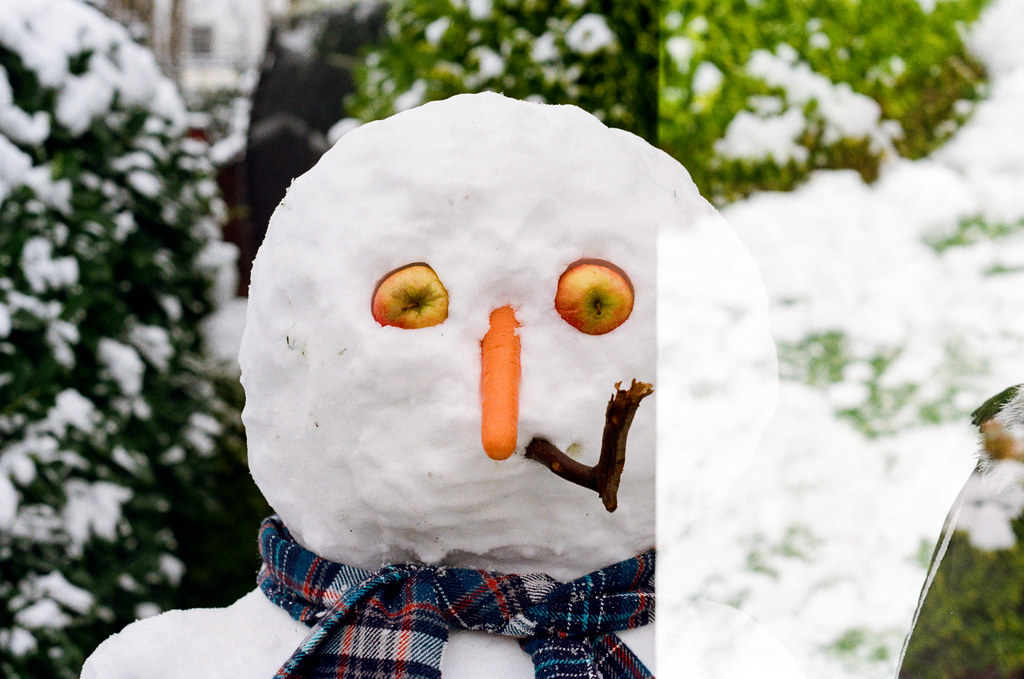 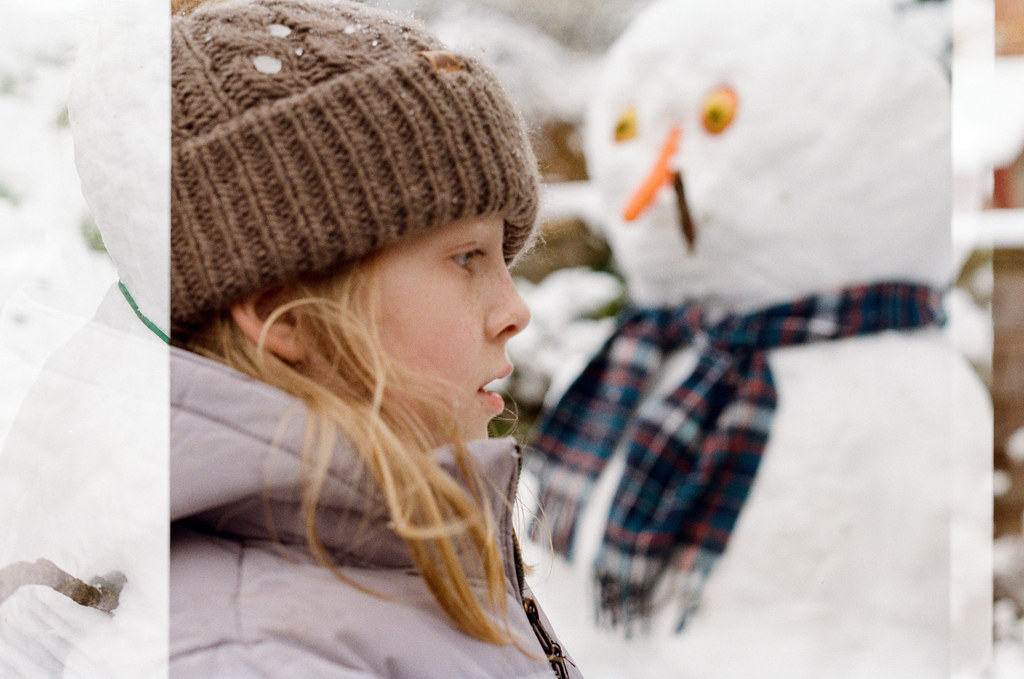 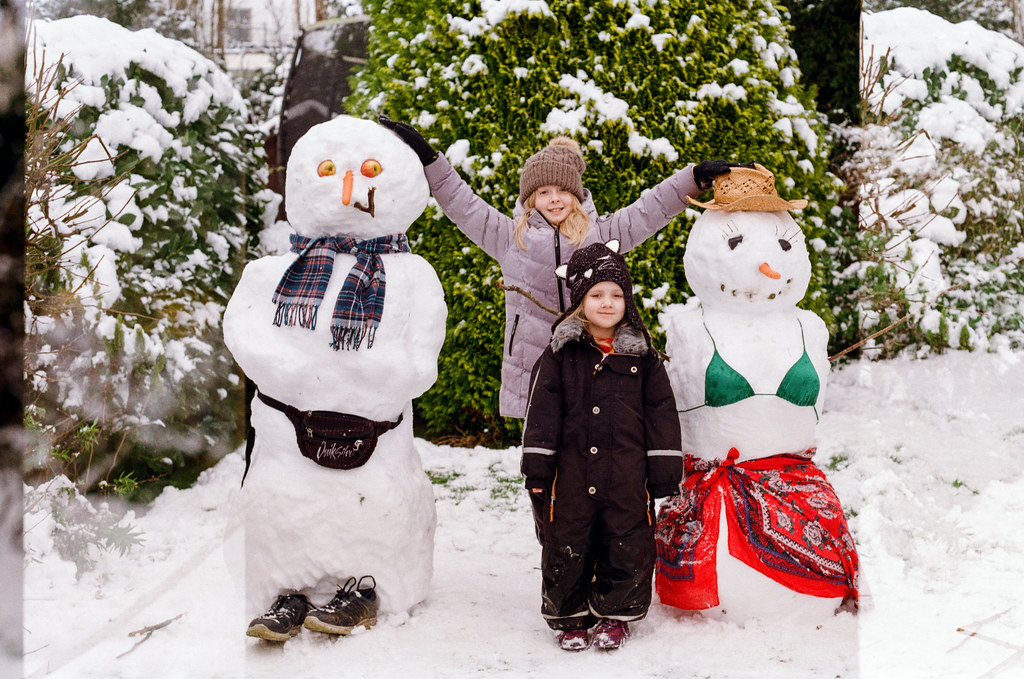 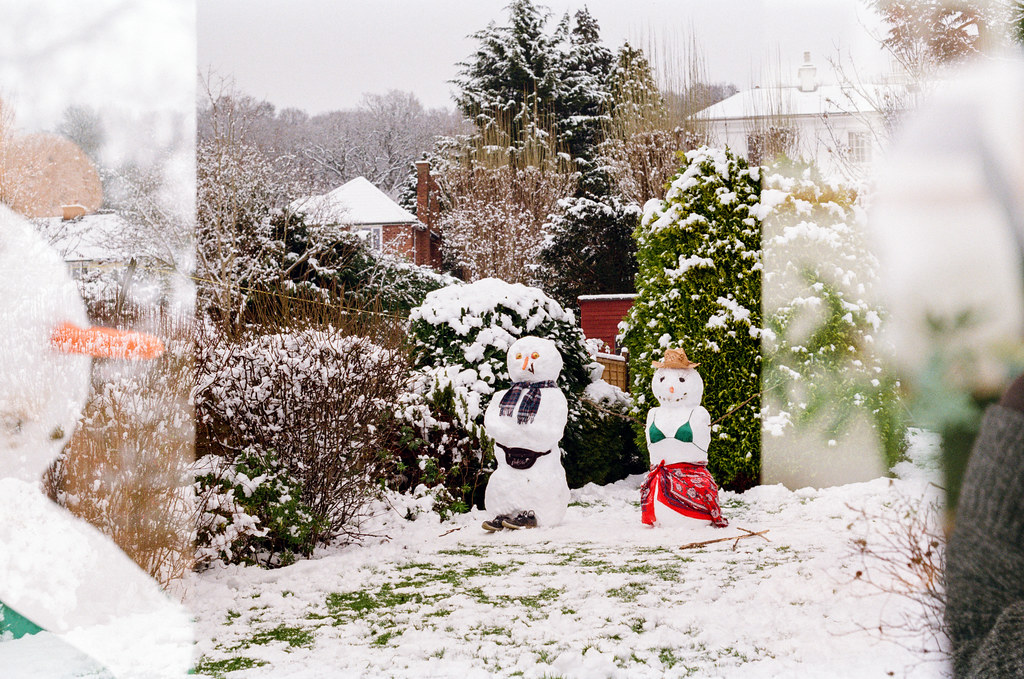 … but the camera, or perhaps my loading of it let me down. Instead of getting a bunch of nice wintery images to remind me of the fun we had in the snow as a family, I have a bunch of overlapped exposures.

Now, I will admit that some of them have a bit of whimsical double exposure charm – a couple have a bit of double exposure that makes for something slightly aesthetically interesting. But that’s not what I wanted. I wanted what I expected. I wanted what I had pre-visualised. As such, there’s no satisfying serendipity here – not getting the images I had in my head when I pressed the button has just annoyed me!

As if to compound my frustration, this was the 3rd roll of 4 I’ve shot recently that’s gone pear-shaped (the other two I talked about here).

This is of course the gamble of film photography. In a world where digital all but guarantees good results, I could just shoot digital and avoided this crap altogether. The problem is, I enjoy the risk. Not least because I’ve got to a stage in my film photography when things don’t go wrong that often – the risk is minimal, if not tiny, and the process is more satisfying than shooting digital… and I like the look of the results.

But, I suppose if it wasn’t for these negative experiences, it wouldn’t feel as good as it does when my results do come out as expected. We need the lows in life to really appreciate the highs, right?! None of this stops me being gutted at these results though. This was an occasion I really wanted it to go right, and it didn’t. I fact might yet return that stupid camera to the bin…!