A few weeks ago (before all this CoronaVirus crap, but whilst Worcester was partially under water – hasn’t it been a fun year), Hannah from Lomography UK got in touch to see if I would like to try a new film they have just announced today: Lomography ‘Fantôme Kino’, a black & white 8 ISO 35mm film!

Of course, I agreed! A couple of days later an envelope landed on my doorstep with a set of basic instructions/guidance and roll of film with a handwritten label on it that simply read “8 ISO”. I’ve not shot film this slow before, so was quite excited to give it a go!

Shooting film at EI8, as it turns out, comes with quite a few challenges. I didn’t want to use a tripod or artificial light as I quite liked the idea of the shooting wide open in broad daylight. I also wanted to make sure I didn’t screw up the exposure as I had no idea of the latitude of the film. As such, I decided to use my Nikon F80 with 50mm f/1.8 lens. The F80 has a very good evaluative meter that I knew wouldn’t let me down, and the 50mm f/1.8 AF-D lens, whilst fairly cheap, is actually pretty damned good wide open.

Once the camera was loaded and set to EI8, I found that I actually needed a sunny day to be able to shoot at shutter speeds appropriate for handholding the camera. Fortunately, after the rain clouds had cleared here in Worcester, we had a couple of fairly sunny afternoons, so about 4 pm one day, as the sun was starting to get lower in the sky, I headed out to shoot my test roll.

As you might expect, I almost immediately fell foul of the low ISO. Walking down the road, I saw a chap sat on a bench apparently looking at the scantly clad giants advertising M&S underwear in the front window of the shop. I raised the camera to my eye and without thinking took a shot. I thought the shutter sounded slow, but it was only after I’d took a few more steps did it click in my head… it probably was slow, I was shooting at EI8!! 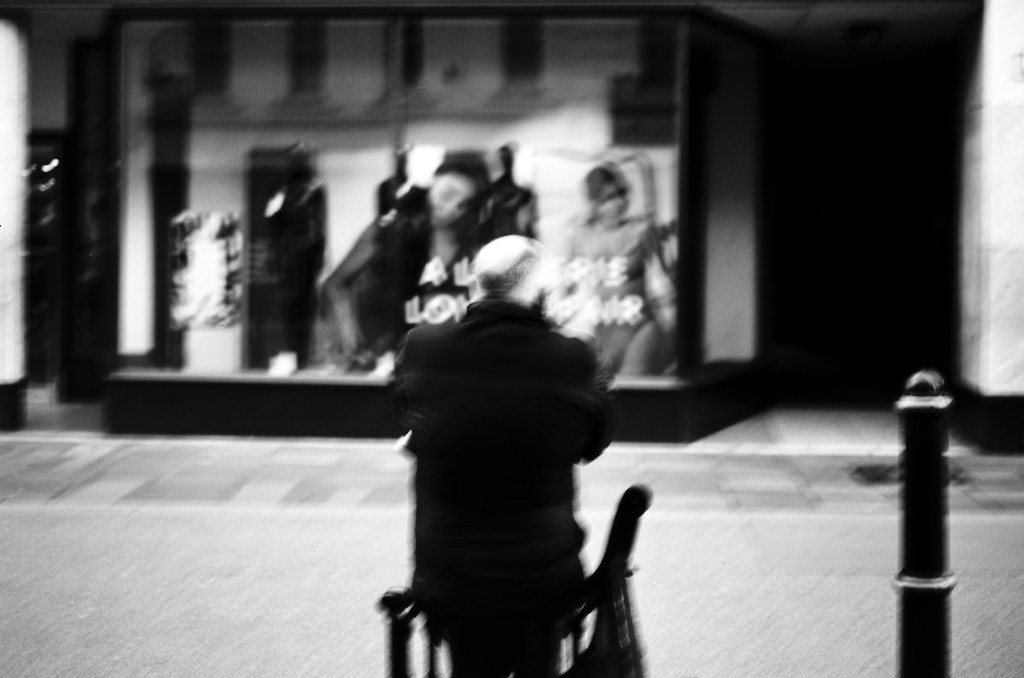 I needed to be more careful! In the guidance for this film, I had been told that it was high contrast. So when I turned the next street and spotted a nice angle of sunlight falling across a white building I decided I would try and line up one of those street shots where the shadow of a person sits in an angle of light. I stood and waited for a while, but people kept spotting me and doing odd things like ducking out of my way… So much for the idea. I took a shot of the building anyway. 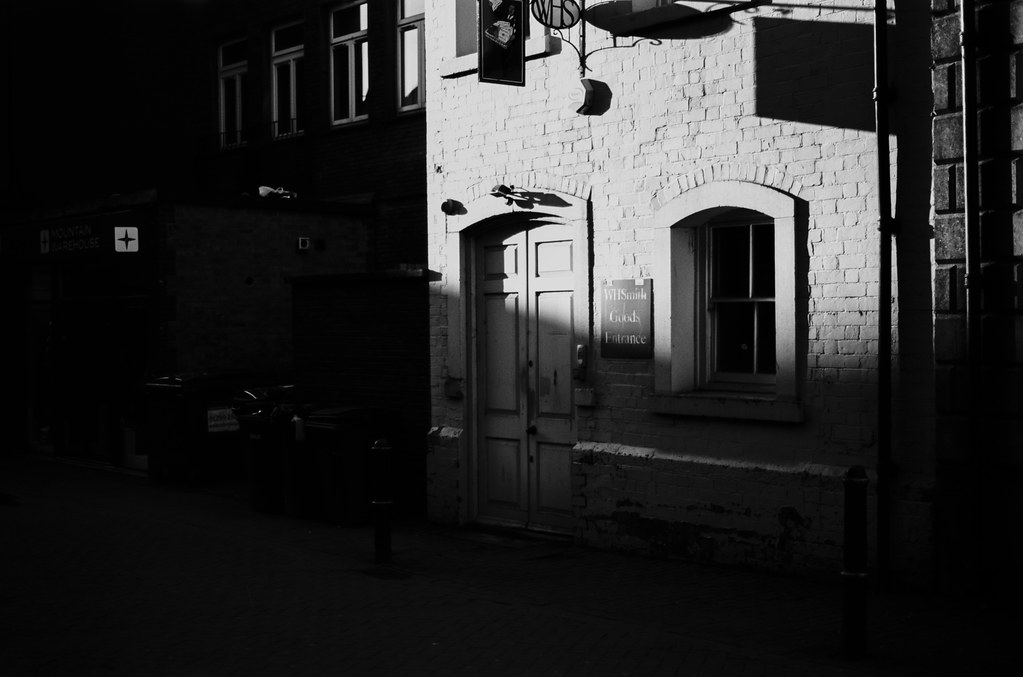 A couple of crap shots later I found myself down a street with the angle of the sun pretty much facing me. I know the 50mm f/1.8 AF-D will do a bit of flare when shot wide open, so thought I’d try and take something of the BT logo on the side of a phone box. A shot of nothing really, with capturing the flare being my main goal. 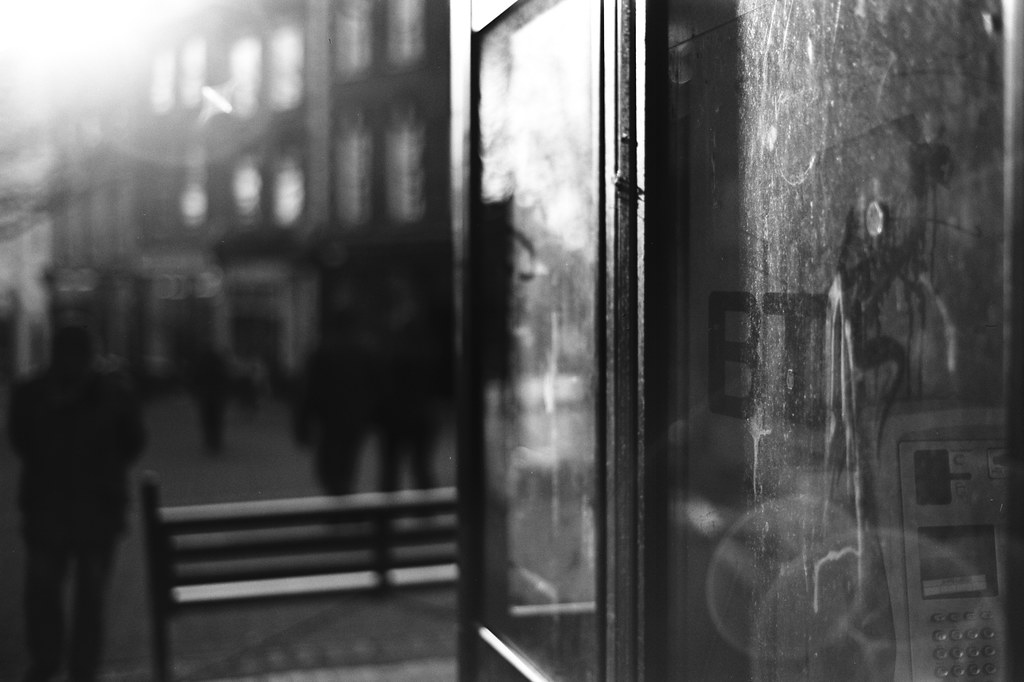 At this point, I started to think a bit more about how I could take some slightly more abstract shots that would take advantage of the high contrast nature of the film. The first thing I spotted was a padlock. The exposure meter was obviously thrown out a bit by the backlight. Still, I quite like the shot. 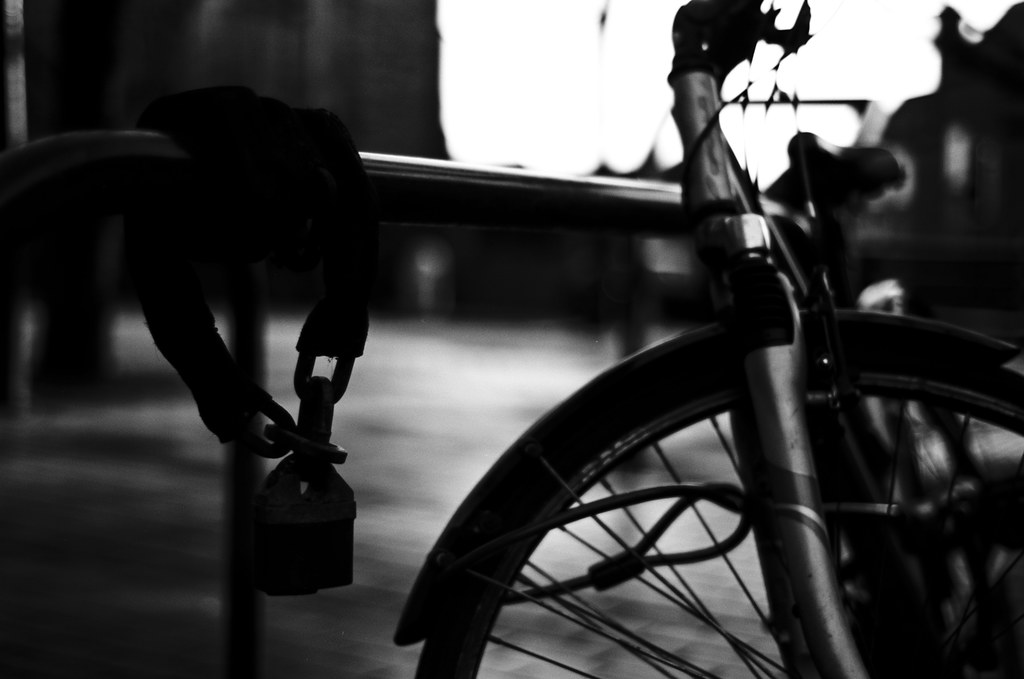 Another bike park just down the road and I spotted these nice shadows. 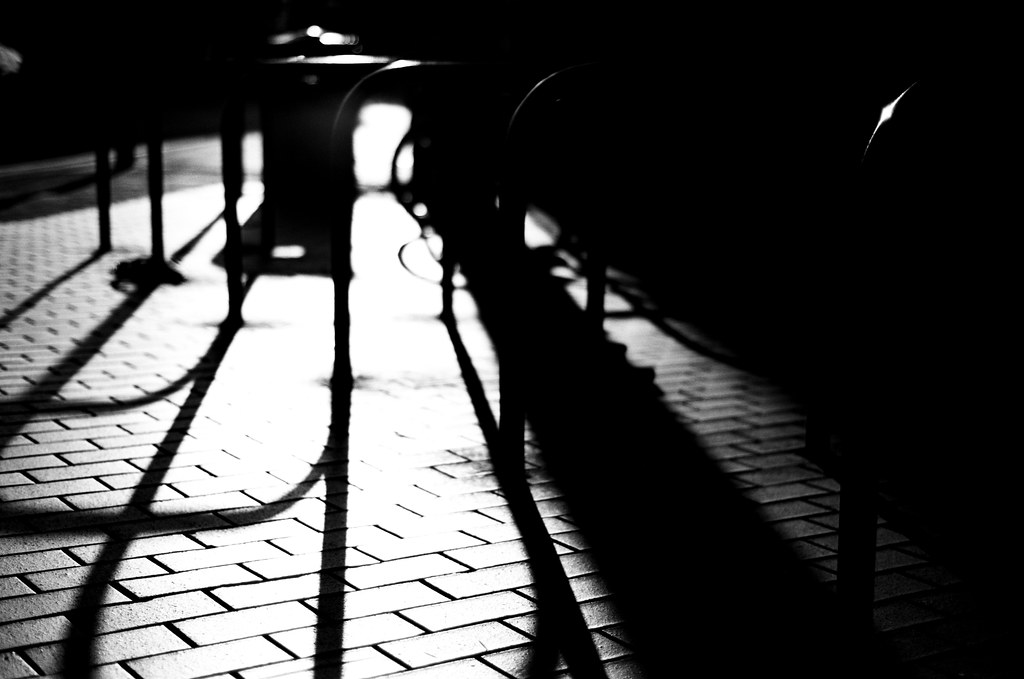 This CCTV sign caught my eye next. Despite being in shade it was catching the light reflecting off something on the opposite side of the road. It looked like it would stand out really nicely against the silhouette of the building behind it. 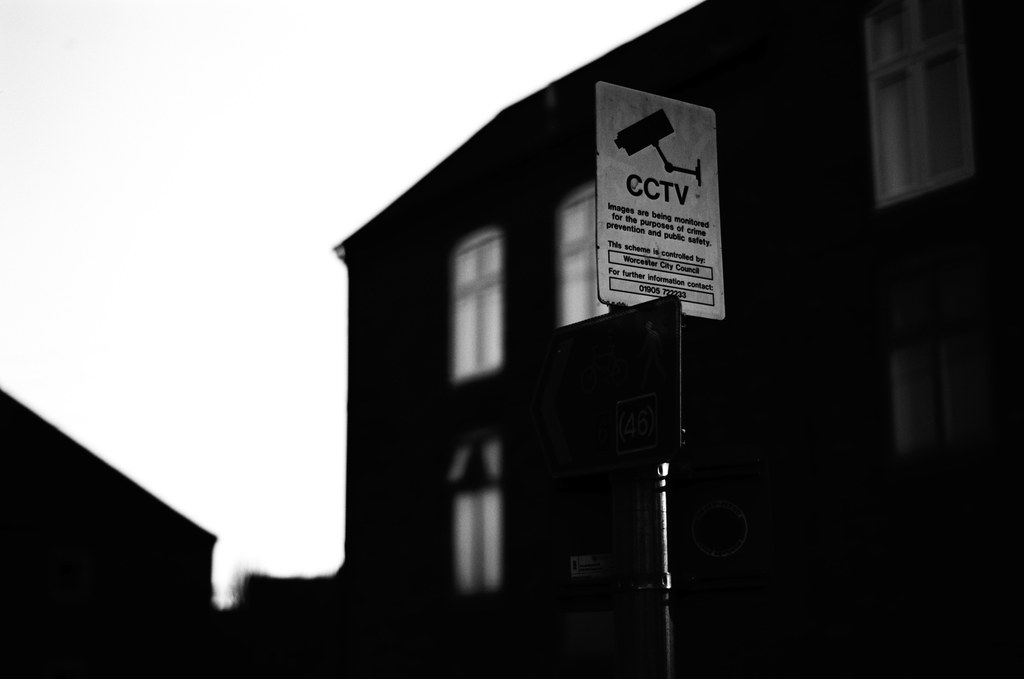 By this point, I felt like I had got my head around what I was doing a bit better. I had the idea the film was high contrast in my head and wanted to take advantage of that within the limitations of the camera settings that were available to me. This next shot jumped out at me, mostly for the fact that the swans at the edge of the floodwater in the shadow area of the building behind still had sunlight landing on them. I think this shot came out really well – it’s exactly what I had in my head at least. 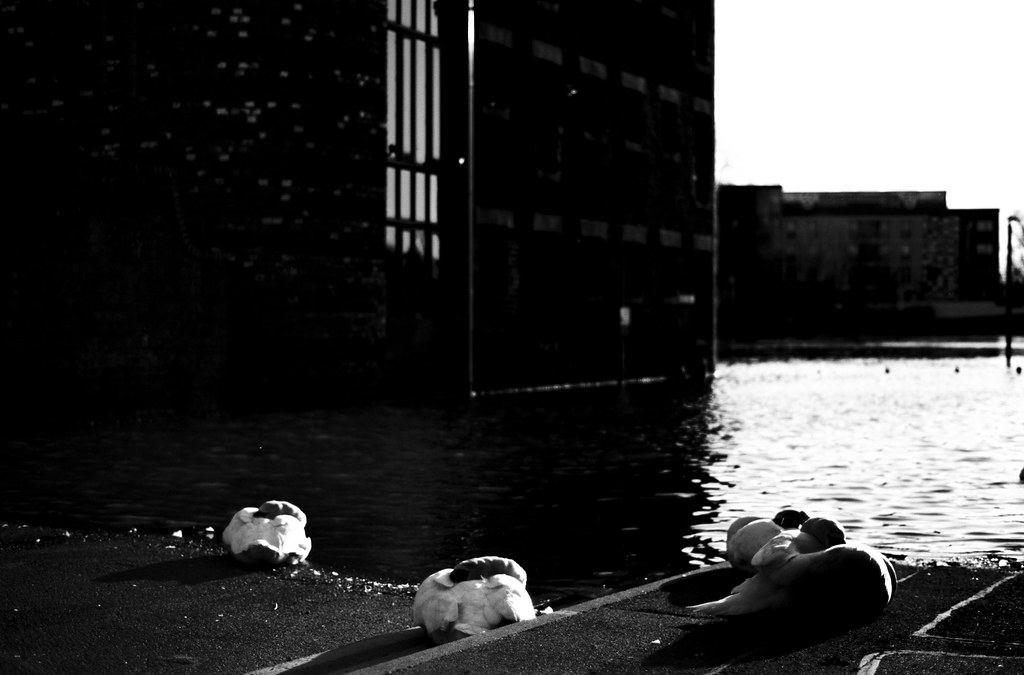 Just down from that shot the high river had brought all the birds to the water’s edge – I guess the current was less strong? Either way, there were birds everywhere, so I shot my last few frames either trying to take advantage of their contrasting bright feathers, them as silhouettes, or looking at the shadows they were casting. These two and the frame at the top of the post were the most successful. 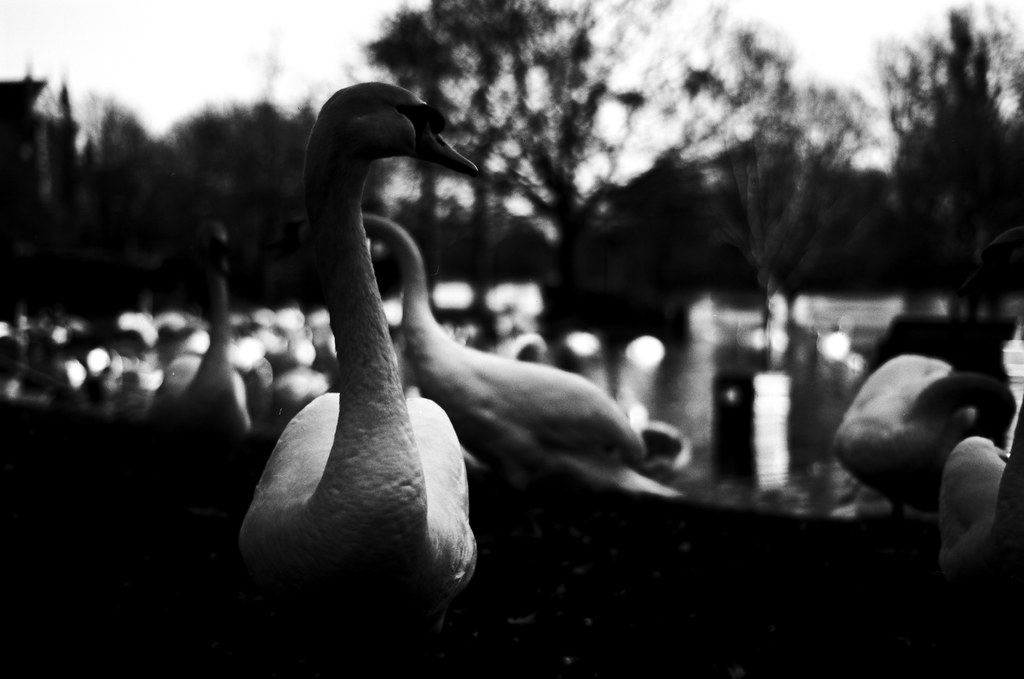 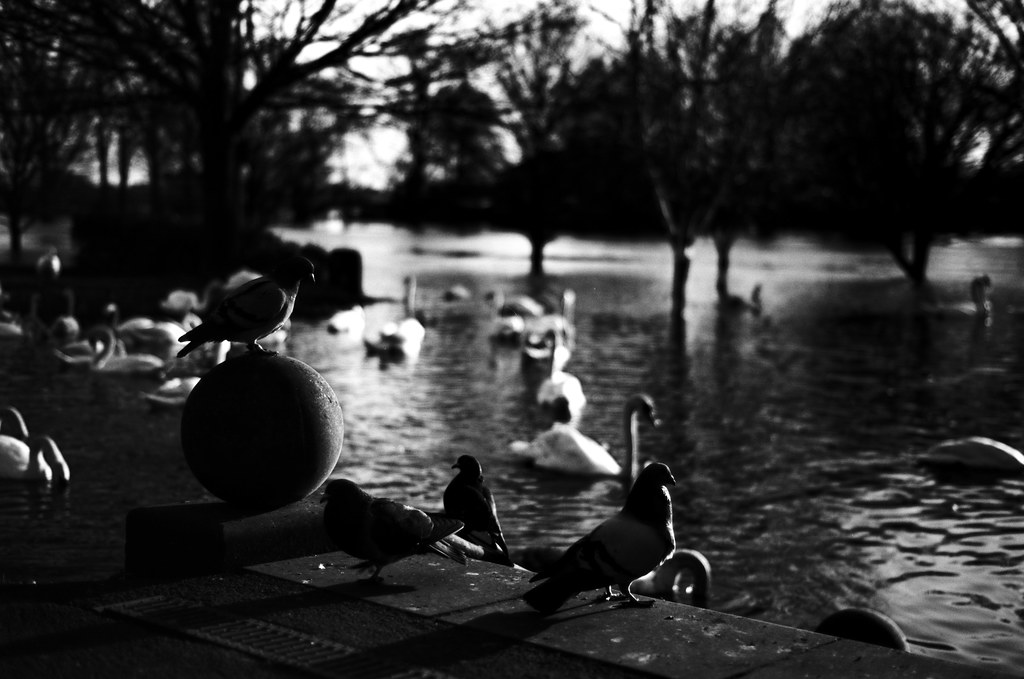 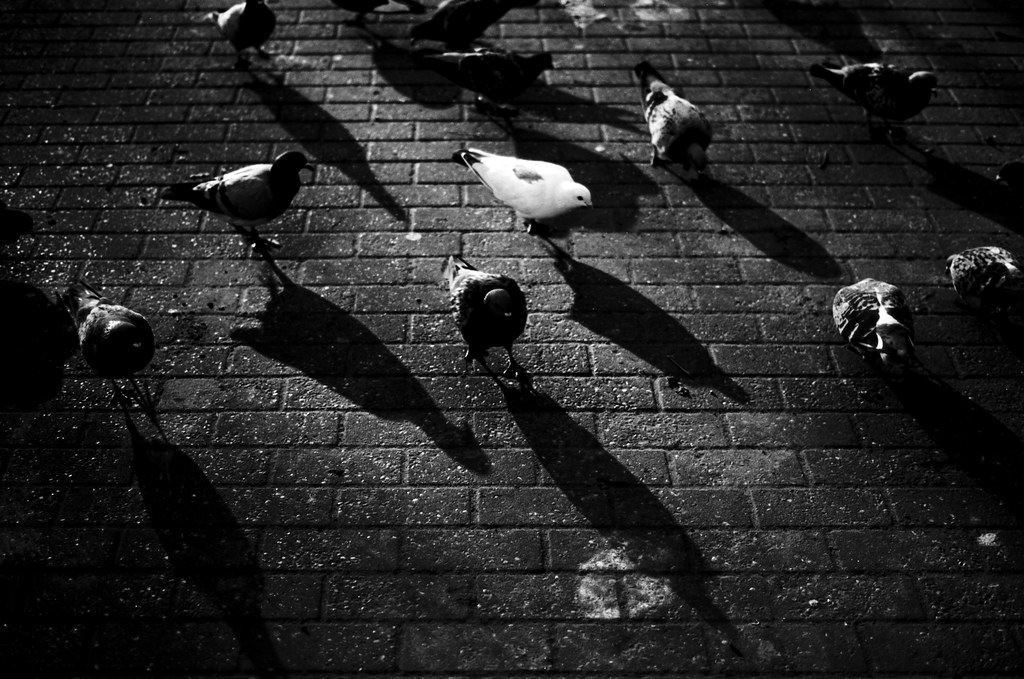 The roll was developed by Duncan at SilverPan Film Lab using the instructions given by Lomography as a starting point. He developed it in a Paterson Tank in fresh stock D96 with standard agitation (30sec + 1 inversion every 30sec) at 21C for 5.5 mins.

As Lomography suggested, they have certainly come out nice and contrasty. Of course, the low evening sun and my desire to take advantage of the higher contrast certainly added to that look. Overall, I’m really pleased with the outcome too!

As I said, this is also the first time I’ve shot such a low ISO film, and actually, I really enjoyed it. I’m a bit of a sucker for working within quite a tight set of limitations, and it’s fair to say that shooting a high contrast 8 ISO film certainly imposes some limitations! There were only a few occasions that the camera didn’t offer me 1/60th of a second as my shooting speed, and when it did it was being thrown out by bright backlighting.

One way or another, this is definitely a film I will try again!

Lomography ‘Fantôme Kino’ B&W 8 ISO 35mm Film has been officially announced today. If you like what you see in my photos, or indeed any of the shots in Lomography’s dev guide here, and you would like to give this film a go you have a couple of ways to get your hands on it. You can either sign up to their current open-call for testers here, or you can pre-order the film in 5 packs here, or in 10 packs here.