The Pentax Espio Mini (or UC-1 as it is otherwise known) doesn’t seem to demand quite the outspoken praise that some of its contemporaries do. There isn’t much info out there online about it, yet what you do find is largely positive, and when I mentioned on Twitter that I’d bought one, it seemed to trigger quite a lot of interest. Perhaps it’s the relative scarcity of it that keeps the collective volume of its advocates perceptively low, or maybe it’s just another fairly average yet mildly enigmatic point and shoot camera. Either way, I decided it was time for me to find out.

Around the time I first picked up this camera, I’d been quite busy, more so than I’d let myself get for quite a while. I seemed to be working late a lot, and combined with this my wife had been busy with work and college etc. Not that this had been a problem, but it had meant that for one reason or another life had seemed to interrupt the normal flow of casual photo taking. I felt I’d regained some of the lack of patience in making any real effort I had with taking photos as when I first started this blog. Whilst out taking day to day photos I just wanted to point and shoot a lot of the time, finding much else to just feel a bit tedious. I don’t see this as an issue, it’s a phase I come in and out of, it’s just about picking up the right camera at the right time, and at that moment, the right sort of camera was quite often a point & shoot… So I bought a few new ones to play with. 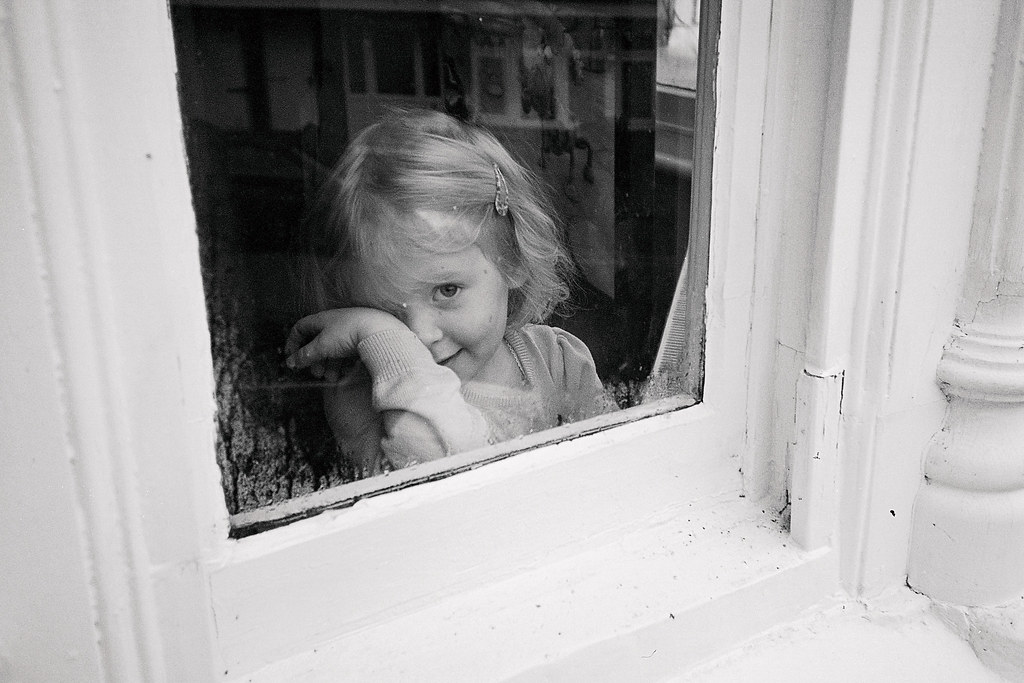 With my Pentax in my pocket, just leaving for work one morning I was able to whip it out and take this snap – a recent favorite of mine of Connie say bye (and looking shy) through the window

I re-embarked on this return to point & shoot photography with ended up being a trio of cameras, the Pentax espio mini being the third one I have eventually found the time to write about. Unfortunately for it, the other two out shadowed it. Not because they’re great cameras, but more because they provided me with a bit more of an instant sense of fun. The Minolta Riva Panorama became the focus of my attention due to its extra-wide shooting, and the Olympus AF-10 – despite being a bit crap – has been the subject of a post I’m writing about forcing a low spec camera to work outside of its usual limitations. The Pentax, meanwhile, had sat quietly in the corner waiting for me to pick it up.

First impressions of a camera are usually related to size and handling, and the Pentax Espio Mini was no different. To start with, it’s quite strikingly small, it’s not tiny like the Minolta TC-1 is tiny, but it is certainly a small camera. It is in fact approximately the same size as a Olympus mju-ii. It handles well too, better than the mju-ii in my opinion. Like the mju, It has a sliding front cover over the lens that acts as an on/off switch, so is very quick and not at all fiddly to switch on; it’s just not the odd slightly uncomfortable shape the mju-ii is. The lens is also set far enough to the left hand side (when holding it) to prevent a stray right-hand-finger from going near the lens – which is the biggest flaw of the Yashica T4/T5 design. All in all, I actually find it one of the most comfortable point & shoot cameras to handle, not quite Ricoh GR1 standards, but it’s pretty impressive for its size! 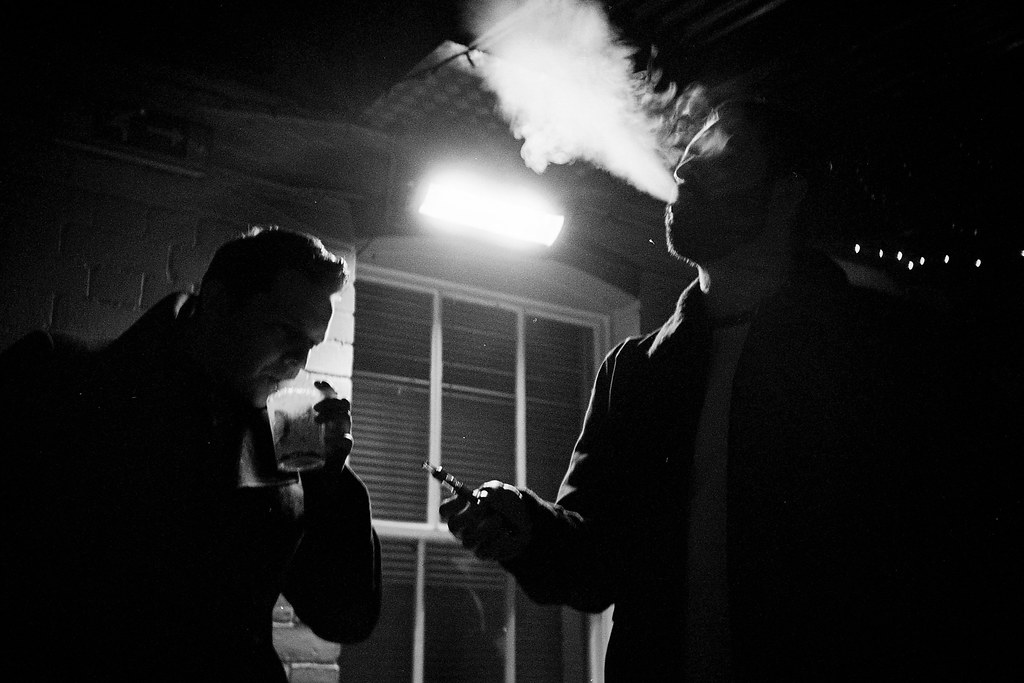 The flash is controlled by two of the four buttons across the top of the camera. Like most cameras of this type, it rather disappointingly doesn’t save the flash settings when you switch the camera off – though I have found a work around for that, which in my opinion much improves this camera wuite a bit – You can read about my Pentax Espio Mini Modification here.

In order, pressing the first button on the left, the camera’s mode cycles through: auto flash (default), daylight sync, flash off, slow sync, bulb with flash off and bulb with flash on. The second button from the left independently sets red eye mode. Flash off mode also shows a little picture of the moon which according to the manual indicates that the camera is in slow shutter mode. 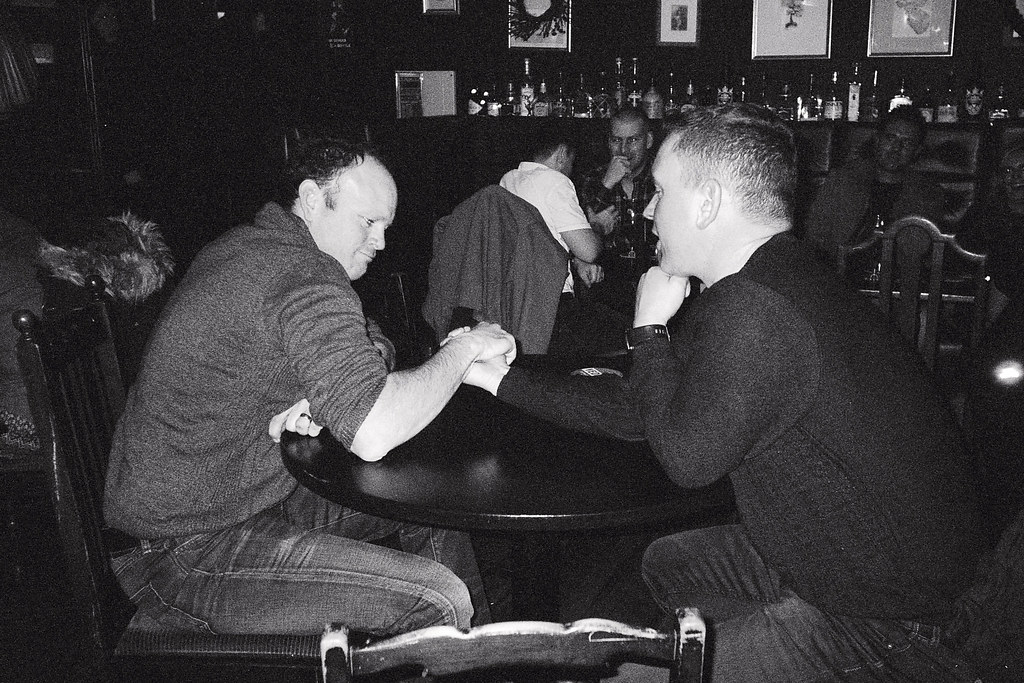 One of my biggest issues with some compact cameras is their decision to use slower shutter speeds instead of wider apertures. Thankfully, this Pentax seems to favour the use of wider apertures keeping the shutter speed as fast as possible. Exposure itself is pretty good too, though there is nothing particularly intelligent about it. It’s just a simple centre weighted meter. Half press of the shutter button will lock exposure and focus, so with a little bit of thought, difficult exposures can be fairly easily managed. 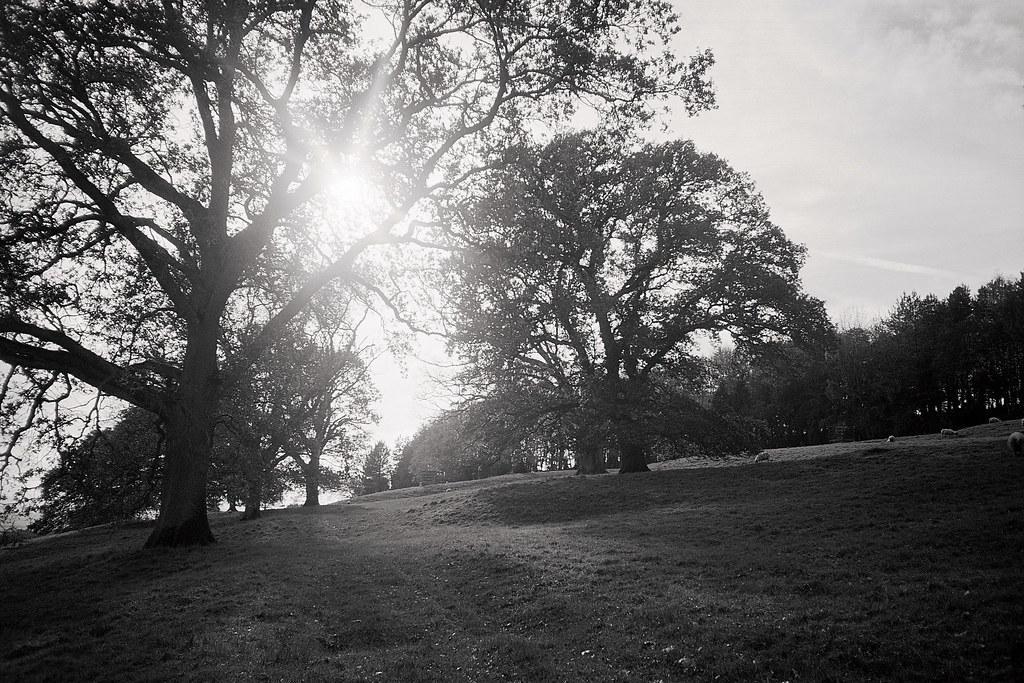 The viewfinder and focusing

The viewfinder is a mixed bag. It has an active/LCD overlay to show parallax correction and for cropping the frame when shooting in panoramic mode. Since the LCD shading overlay of the viewfinder is only displayed on shots where required, I find myself a lot more aware of it than I might be when shooting close up with a viewfinder that just has passive guidelines. It also has the added benefit of giving you a bit of confidence that the camera has focussed on what you intended when closer focusing. One line of LCD shading kicks in at about a meter, and two lines at – or at least close to – its closest focusing distance of about 30cm. 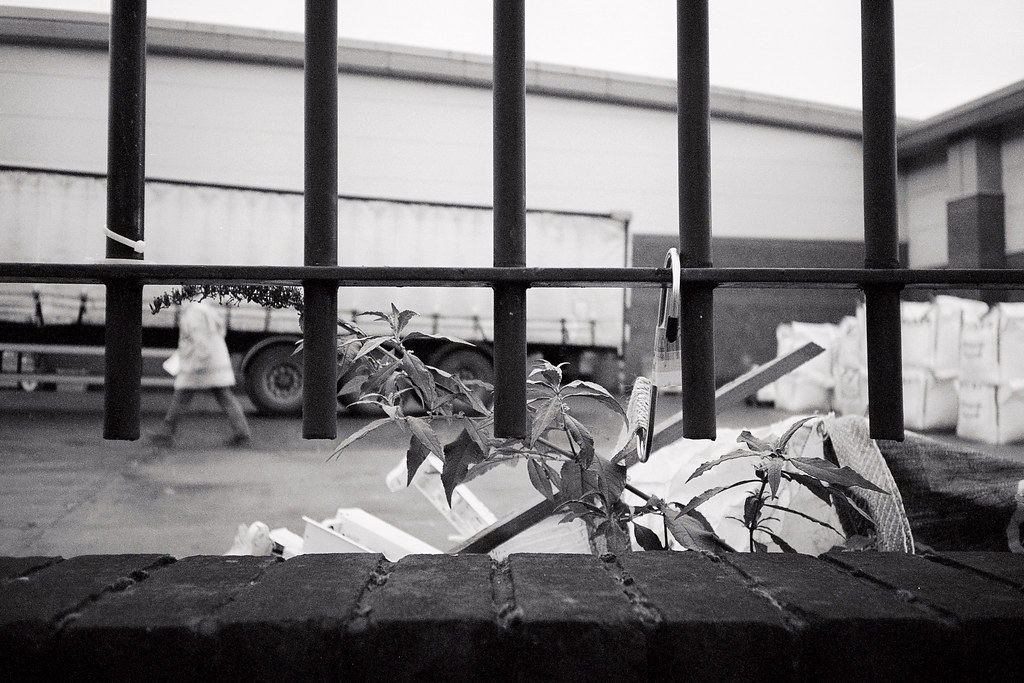 I could see the camera had focussed on the bars since it showed my the close focus parallax guides.

Unfortunately this is possibly the only really good thing about a viewfinder that otherwise gives no other information, is near impossible to find with your eye the first time and blacks out when viewed even slightly off centre. In fact, it’s very similar to the mju-ii and Yashica T4/T5 viewfinder which both suffer with the same problems. I can tell a camera that is going to have a bad viewfinder before I even put it to my eye these days, good ones are big on the back and front of the camera, bad ones are always the ones that have a small pupil on the front. The front of the VF on the Pentax Espio Mini is tiny!

With the aid of the aforementioned focus lock on half press, the active parallax guideline and a green focusing confirmation light by the viewfinder, the Pentax Espio Mini does feel and act fairly reliable when it comes to focusing. Even in lower light/contrast situations it seems pretty spot on a lot of the time.

The focusing system – stated as “multi AF” on the camera and “phase match” in the book – is seemingly a passive AF system with a red-light focus assist lamp. Unlike most of the passive AF cameras I own – and more like an active AF camera – it doesn’t move the lens to detect focus when the shutter button is half pressed. Instead, focus must be gained through the vast array of little sensors that surround the viewfinder on the front. However it works, it seems to work well, and thanks to moving the lens on full press instead of every half press, it feels like quite a quiet camera. Though of course moving the lens after full press does introduce a minimal bit of lag.

The Pentax Espio Mini has a 32mm f/3.5 lens – I actually find the 32mm field of view near perfect for snapping!

I must admit, my initial response to the photos I took with this camera was not a positive as I had hoped. If I’m honest I was hoping to be blown away, I was hoping to have the same response I’d had to the photos from the Yashica T5… But I didn’t. My first response was actually one of disappointment. In hindsight I think this disappointment was perhaps slightly due to having my very high expectations dashed. The reality is, results from the Pentax Espio Mini are very good, they just aren’t quite up there with the Yashica T5, in fact I don’t think they are quite as good as the Olympus mju-ii either. The lens just doesn’t quite have the resolving power or contrast to give the same “pop” to the photos that come out of the mju-ii or Yashica T4/T5. It also isn’t as good into the corners where it seems to get quite smeary toward the extremes when shot wide open – it also vignettes, which might be a problem if you see that as an issue. That all said, it’s by no means a bad lens, it doesn’t flare/veil too much, out of focus rendering is nice, I’ve not noticed any distortion… In short, it’s much better than the average cheapy point & shoot, just not quite up there with the best of them. 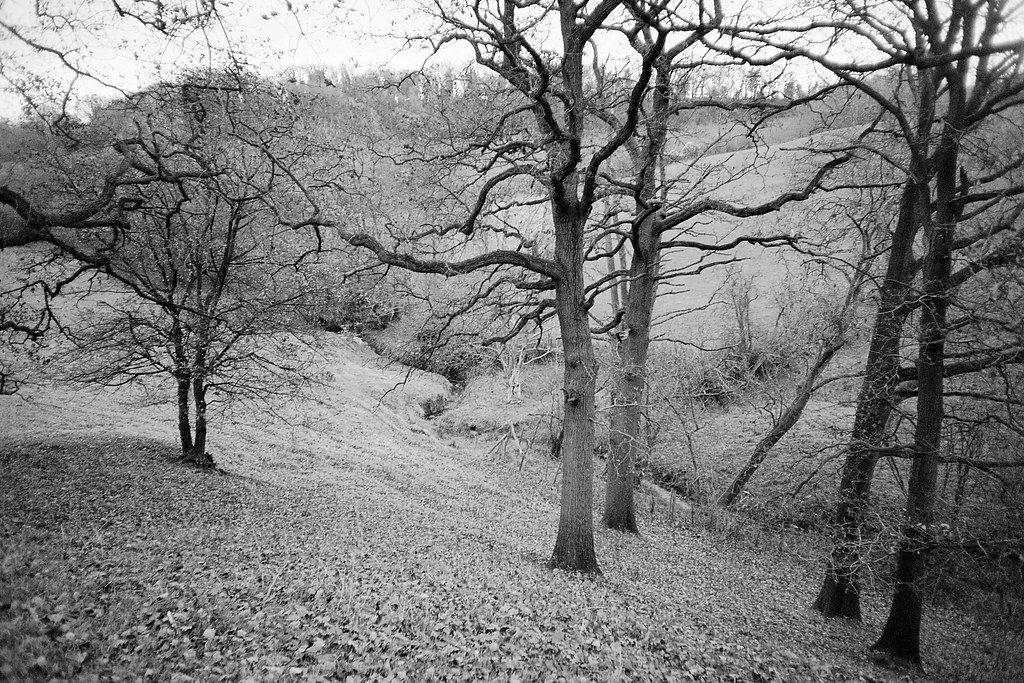 This photo shows the smearing in the corners 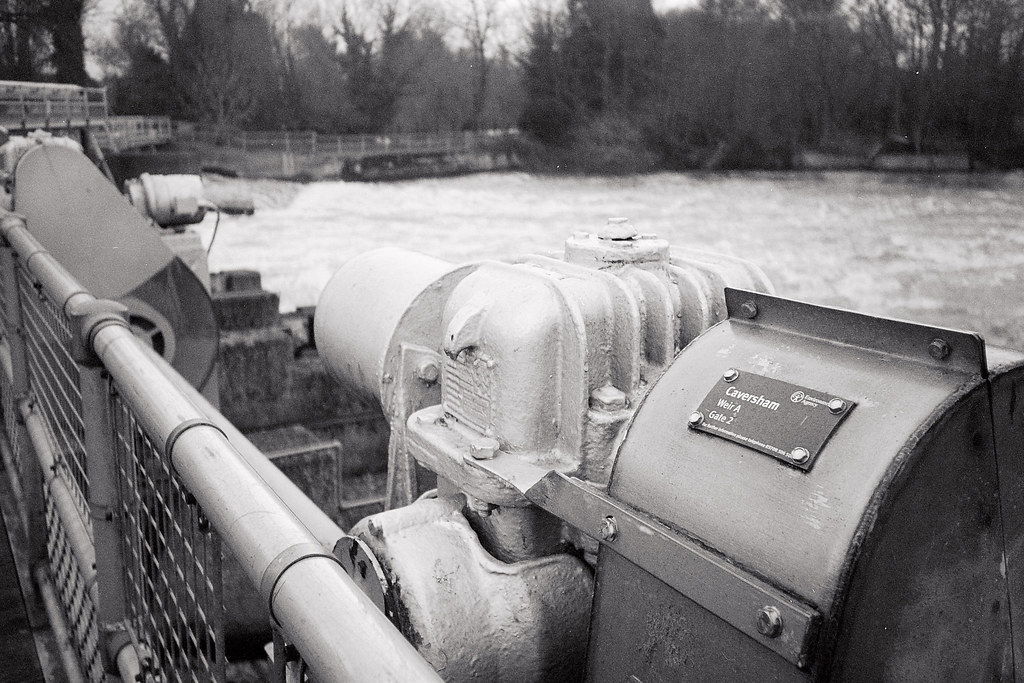 Close focused with ease on the plaque in the foreground. The Out of focus rendering is unoffensive. 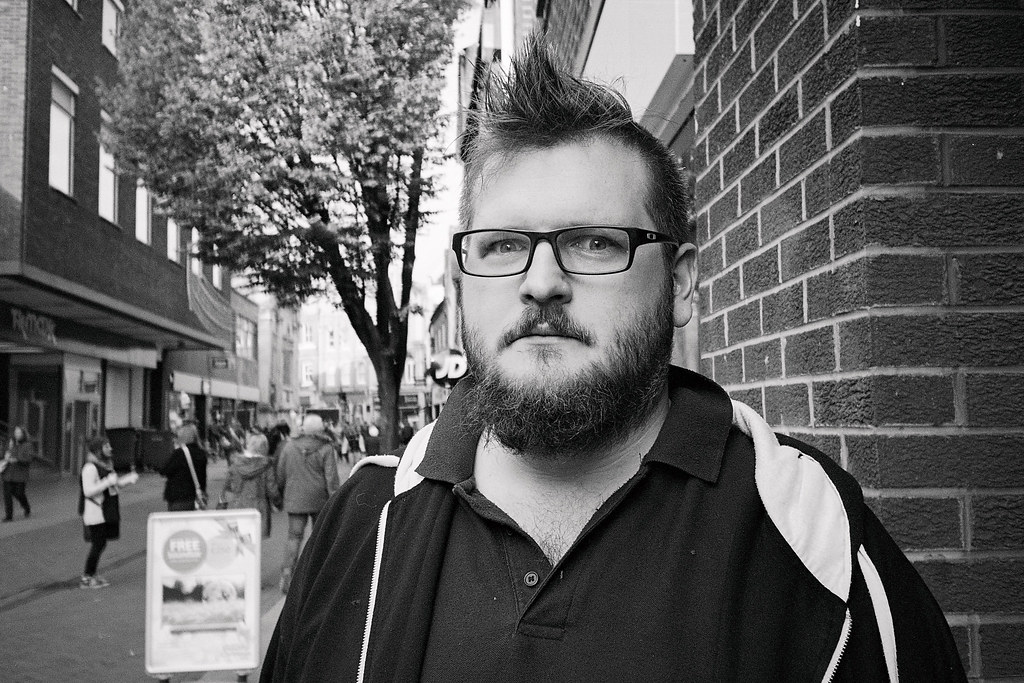 The Pentax Espio mini promised so much: it’s very small, light, handles very nicely. In operation it’s quick too, and quiet. But, like so many of its peers, it forgets flash settings when it is switched off meaning that for every time it is switched on, the appropriate flash setting needs to be selected before shooting. But, for the first time, with a camera like this, of this quality, I managed to modify the camera in such a way that overcomes this issue. All of this was starting to add up to a camera that I really liked. And I do really like it, but the very slight shortfall in image quality compared to the Yashica T4/T5 and Olympus mju-ii for me just taints it slightly. If it wasn’t for this slight shortfall in image quality – without any doubt – this would be my recommendation to anyone looking for a point & shoot. But at the end of the day, the photos it takes are the most important factor, and the Olympus mju-ii for the same money second hand takes a very slightly better quality photo. Christmas in colour - A few shots with the Voigtlander 50mm f/1.1