5 Frames from New York, on Cinestill 50D with the Olympus XA – by Simon King

I recently returned to London from a week in New York, which I spent exploring the city with the sole purpose of photography. Usually my travel setup involves two bodies which can share lenses, but earlier in the year I started to use my Rollei 35AFM as a pocket snapshot machine, and as such it never left my front shirt pocket – not when travelling, and not when in London. However as time went on I decided that the Rollei, while a spectacular camera, was not justifiable; I sold it and bought an Olympus XA. I wrote about one of my first rolls through the XA here, where I mentioned how I was struggling with the 35mm field of view.

Despite this I have stuck with the XA, and shoot it very frequently – mostly snapshots, but also when I need something wide angle, or very discreet for a situation. When in New York I used the XA as a colour camera (after finishing the roll of T-Max 400 which was already loaded), complementing my Leica M6 which ran only black and white film throughout the trip. It spent the week in its usual spot, my shirt pocket, always cocked and cover closed, ready to fire as soon as I needed it to. Over eight days I went through two rolls of Cinestill 50D and half a roll of Kodak Pro Image 100. These are much lower films than I usually shoot, but my assumption was that I would be mostly shooting in bright summer light. Something I hadn’t accounted for when selecting my film options for the XA was that by selecting lower speed ISOs I wasn’t able to shoot comfortably on the Subway system. While excellent for bright light Cinestill 50D at f/2.8 was giving me shutter speeds from 1/2 a second to a full ten second exposure at one point. When shooting the Subway with faster 400 speed films in my Leica M6 and 90mm at f/2 I was setting my shutter fairly consistently at 1/30ths – 125ths which gave me images I was much happier with. I’m used to loading a 400 speed film in the XA and shooting it EI800 then push processing it, which is useable in almost any situation for me. By switching up my workflow in favour of the sunlight it meant poorer images in lower light. I think I’ll be sticking to 400 speed and simply overexposing in the future, as there was one shot in particular (immediately above) which I think would be much, much better without the motion blur.

The XA was great for situations I didn’t want to bring my M to my face. I really enjoy framing by eye, which is much easier on the wider lens, and focusing/shooting from the hip. Especially in New York I found it a useful skill. 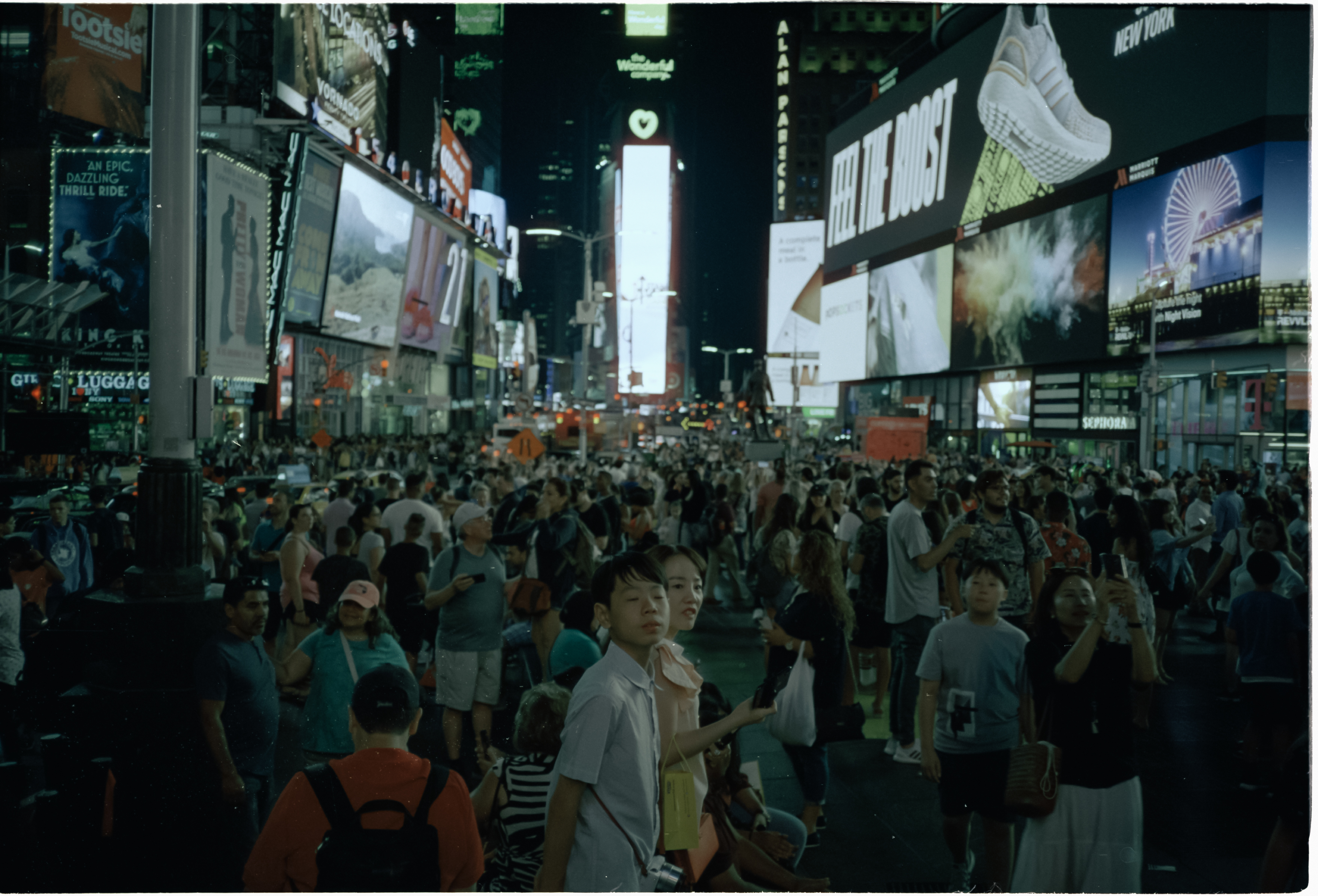 The 35mm lens is still something I’m getting to grips with. I’m used to spotting a composition from further away, then moving closer to accommodate. I feel that with the snapshot approach of the XA I have leant towards more spontaneous image taking, with less concern for the exactness I usually apply to my images. I shot things I wouldn’t have normally looked at twice, and I think this made for a really nice little collection of smaller moments, which is sort of refreshing. Thanks for taking the time to look at my images here. You can see more of my images from New York in the article I wrote specifically about it on my own blog. You can also follow me on Instagram for a curated feed of my best work! I buy all of my film from Analogue Wonderland.

5 frames with a Smena Symbol – by Matt Evans