I spent a couple of weeks taking snaps with a little Canon Sprint. It wasn’t a camera I chose for its merits, nor did I know what the roll of film contained within it was. This might sound slightly unusual circumstances to shoot a camera, but actually it made what turned out to be an interesting camera all the more enjoyable to shoot.

The Canon sprint in question was the Bad Beagle Photography Traveling Canon Sprint. Inspired – to some degree I believe – by the Travels of the Yashica T5, Michael has added a couple of twists to the story. The first is that you load the camera with a roll of 400iso film for the next person, without necessarily telling them what it is. The second is that the Sprint isn’t quite the sought after camera that the Yashica is. For me this gives it a bit of an edge in terms of enjoyment. There is no expectation with this camera – it is just an average looking unheard of point & shoot. And if your anything like me, you’ll find taking the time to shoot an average point & poke once in a while a very enjoyable experience. The Sprint was no exception – in fact, once I realised a few facts about its function, I quickly became very intrigued by its potential!

By any other name (or colour)

In true Canon style the Sprint has a whole bunch of completely different names. The one I had for a week or so is labeled ‘Sprint’ but you might find them under the name of ‘Canon AF35J Jet’ or ‘Canon  Autoboy lite’. They also apparently come in red as well as black. For something they gave three names and two colours you might be expecting a long feature list. If that’s the case, you should definitely set those expectations to one side. In fact, there’s really only a couple of modes, and beyond that it is very much a case of point & shoot. But – and as many readers of this blog will know, this is a big “but” – all point & shoots are not equal, and in the case of the Canon Sprint it has a few tricks up its sleeve that almost always gets praised by me… Before I get into the features I really like, it’s worth highlighting the macro flash. The camera strap has a little measuring marker on it at 45cm from the camera. By holding the strap out in front of the camera you can determine the closest focus distance. Apparently the When the macro flash is activated the Canon Sprint focuses to 0.69m. It must then rely on a smaller aperture and the power of the flash to accurately expose and focus at 45cm. How useful this is really depends on how strong your desire to take close up photos with a flash. Thanks to the smaller aperture though, the ones I took were pretty sharp. 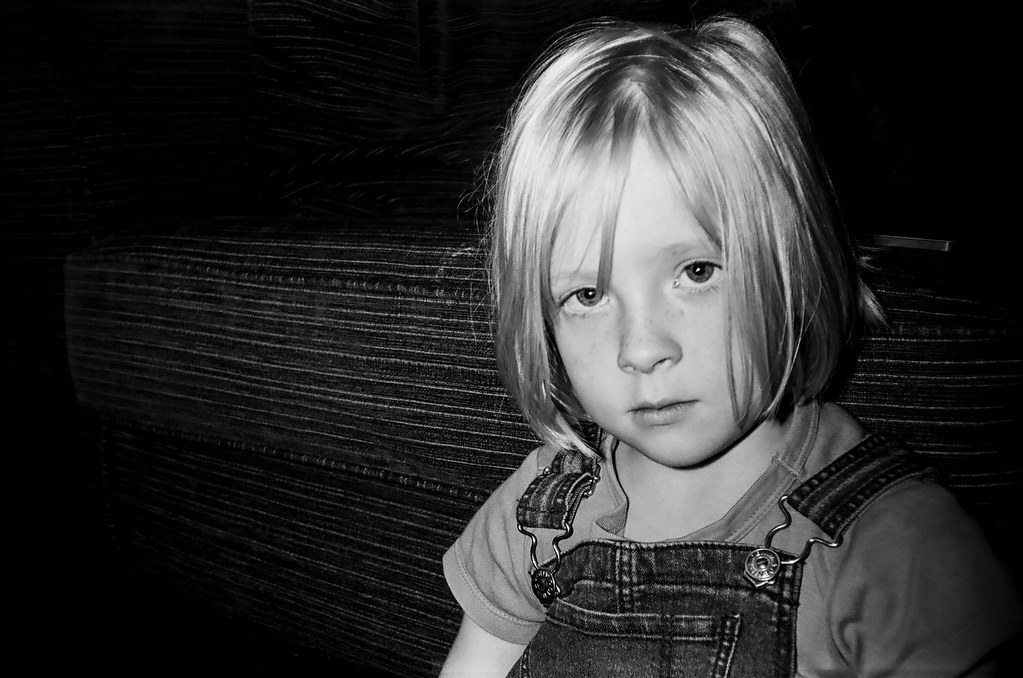 With that out of the way, I can get to what actually interests me about this camera. There are a couple of features, but actually it all starts with the fact that the flash is not automatic. Yes, you read that right! The flash on this cameras default state is off – and it doesn’t flash unless you specifically ask it to! In fact, it doesn’t have an automatic flash at all.

It will tell you when it’s off, and it thinks it needs to be on by blinking a little light at you, but there is nothing forcing you to act on that blinking. If you ignore the flash warning, it simply doesn’t fire. This is far from unreasonable either. Choosing a shutter speed that equates to correct exposure is pretty much what you would hope an automatic camera would do, right? The problem is, if the light is low and you really don’t want to use the flash this sort of function limits the use of those sorts of cameras where the use of slow shutter speeds isn’t an issue. And unfortunately, even with some very nice-lensed cameras, there is very little way around this.

This is why I have a bit of a penchant for Cameras like the Canon AF35J. Unlike many point & shoot cameras it doesn’t do slow shutter speeds. Like the Olympus AF-10 super (another favourite of mine for the same reasons) it’s meter only works down to ev9 (100iso). Ev9 (100iso) in a camera with a lens with a f/3.5 maximum aperture gives a slowest shutter speed of around 1/45th. In short it doesn’t matter how dark it is, the camera is limited to 1/45, f/3.5 and the ISO of whatever film you put in. 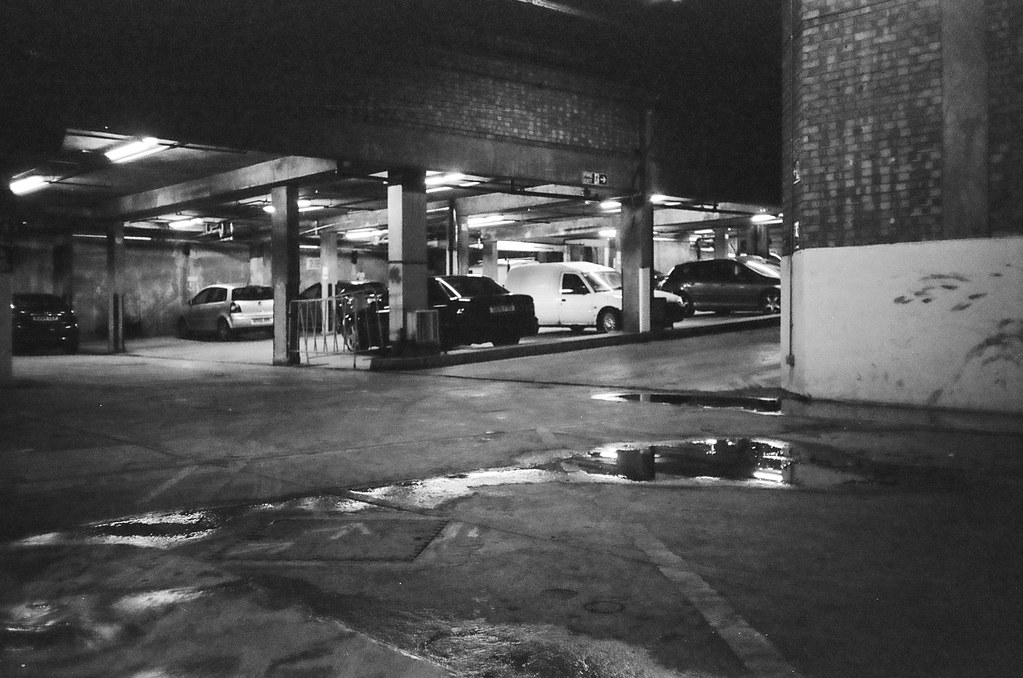 Shot in too little light, handheld – the latitude of the film took the strain

…And, just like the Olympus AF-10 this Canon Sprint has a DX code reader that is limited to only 100 and 400 ISO film. This again might seem like a limitation but if you want to use this camera for low light shooting, it actually becomes the final piece in the slightly shitty puzzle.

For example, if you put 3200iso film in the camera it will default to 100iso. This might sound bad, but all it really means is that when you are out shooting your 3200iso film in lower light, the camera just defaults to that 1/45th shutter speed and uses its f/3.5 widest aperture.

This is exactly the reason I liked the Olympus AF-10 super so much – especially after I modified it to not default to auto flash. But of course the Canon doesn’t have automatic flash straight out of the box… Which for me just makes this Camera the almost perfect combination of crappy features for a point & shoot. At least in theory. In practice it all comes down to the quality of the lens

Fortunately, the lens in the Canon Sprint pretty good too. Unfortunately, I’m not really able to say if it is any better or worse than the Olympus I’ve compared it to, as I only shoot one roll of film in it before I had to pass it on to the next person. Not only that, but the film was Kodak 400 tmax which is a film I’m not sure I’ve ever shot before, so find myself on shaky ground when trying to rate the lens in comparative terms.

That being said, it looks pretty good in terms of sharpness, distortions and doesn’t seem to vignette too heavily. You can judge for yourself, but my gut feeling is that it’s not going to be up there with the likes of the mju-ii, but it’s going to give most people perfectly a acceptable outcome. 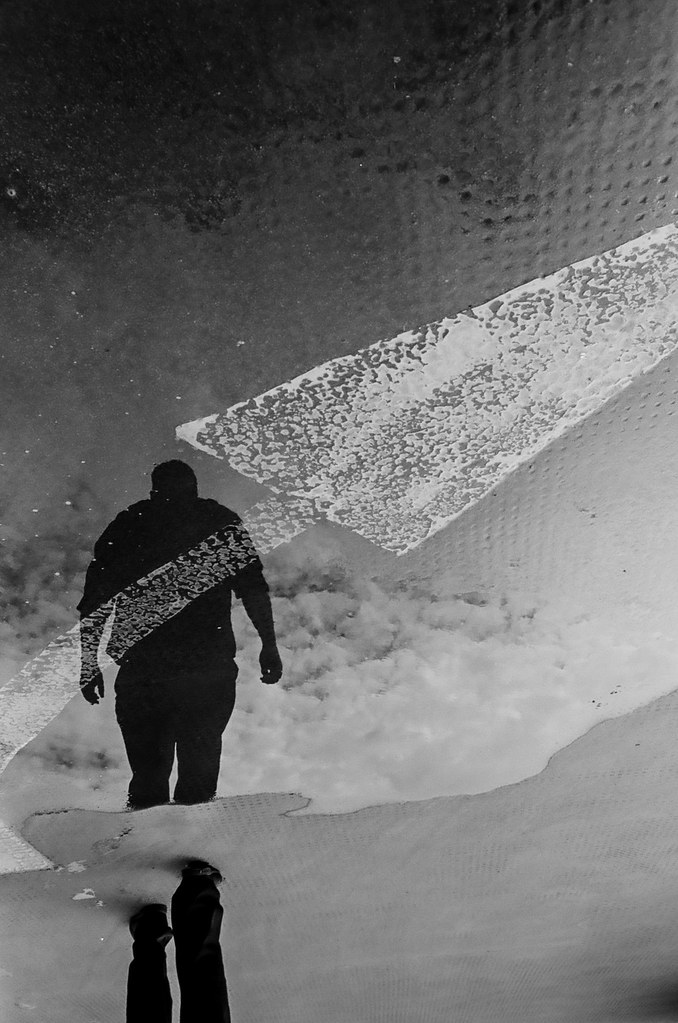 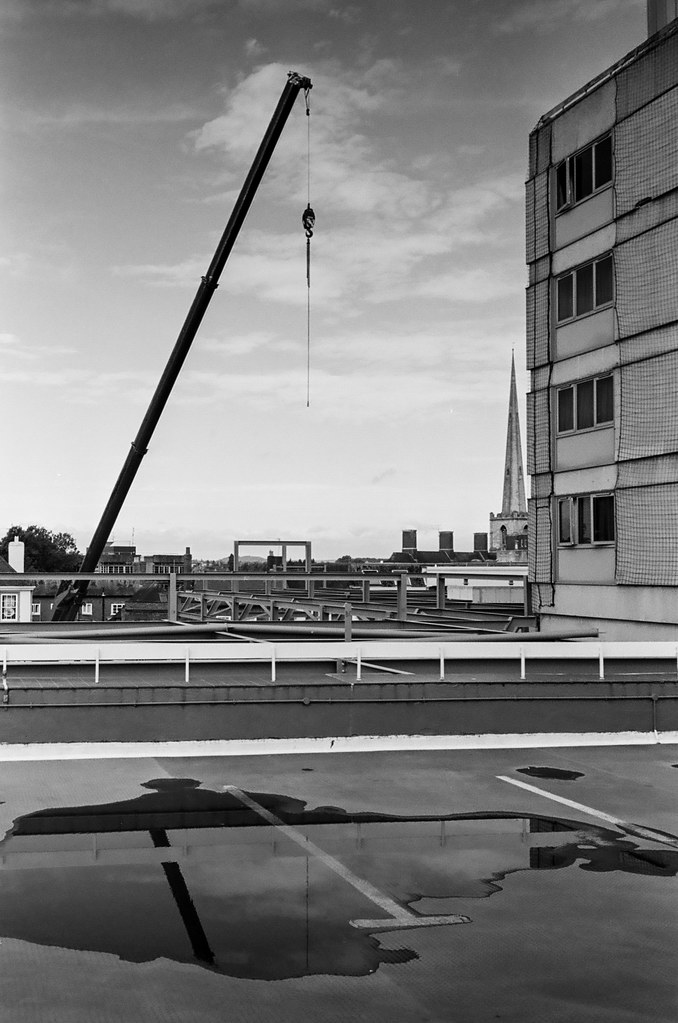 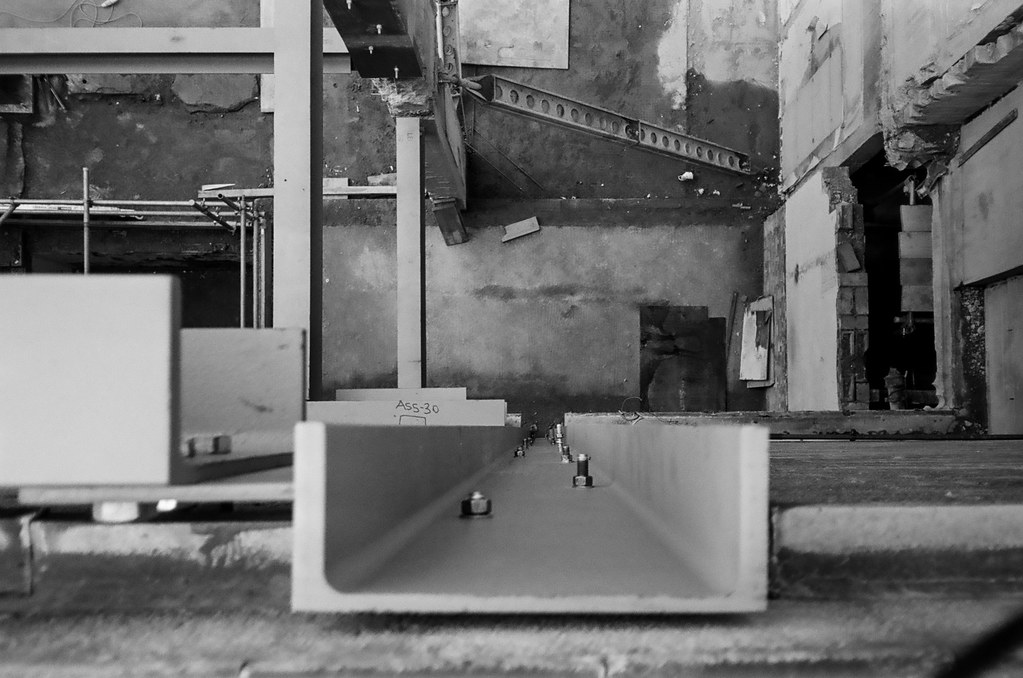 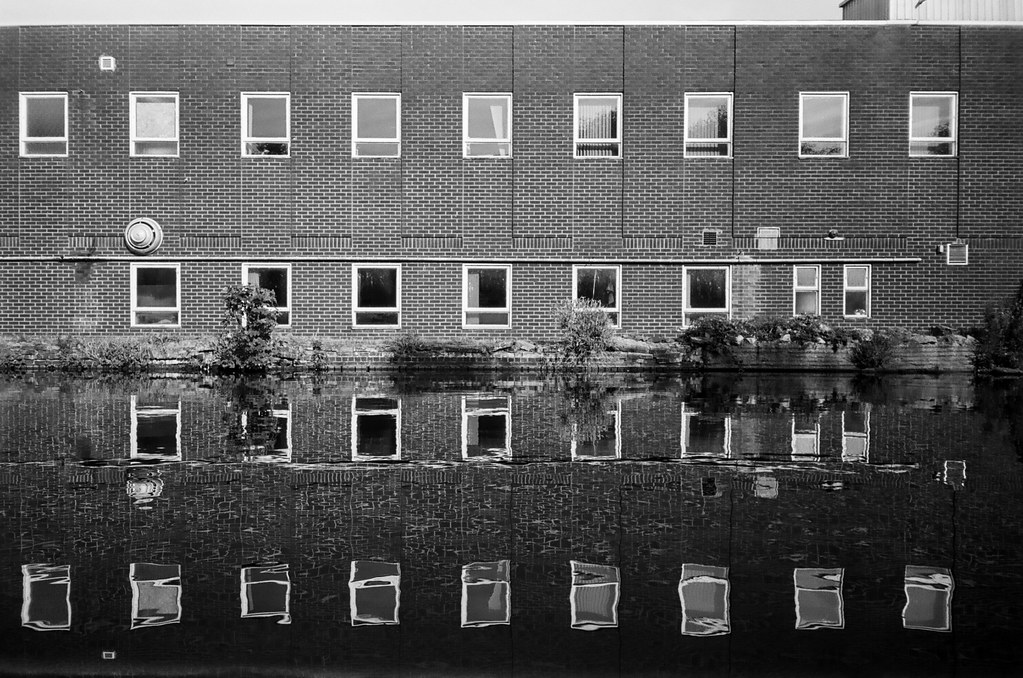 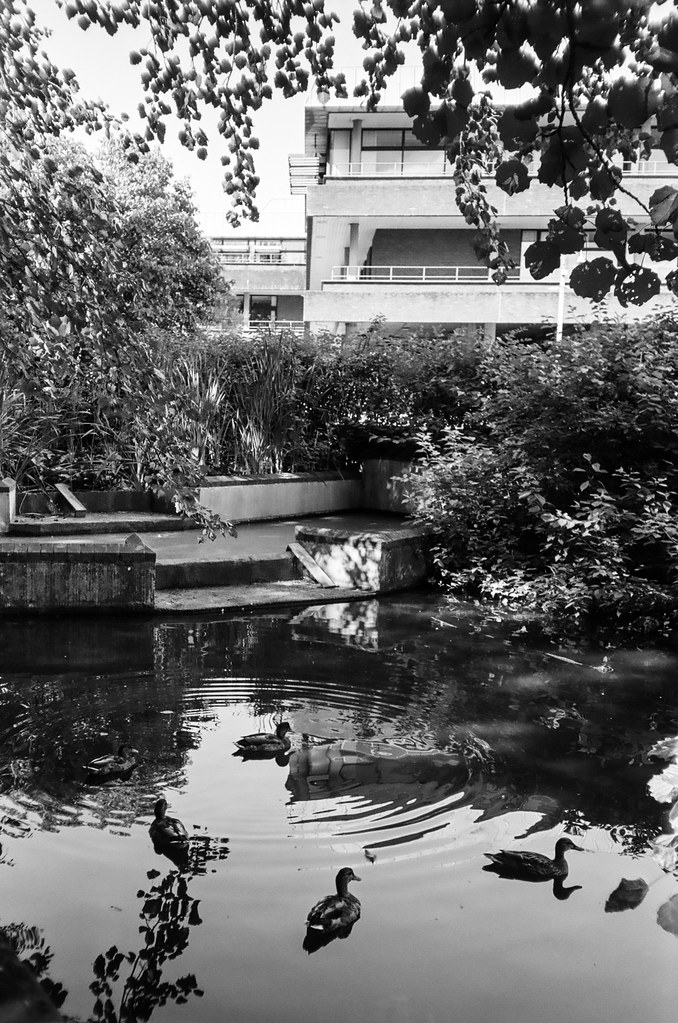 So that’s that, a single roll of film through a very basic point & shoot. The joy of it all of course is that whilst the Canon Sprint an undoubtably basic camera, sometimes these basic cameras are designed be so basic that that they become abundantly useable.

It takes perfectly decent photos in good light, and whilst I perhaps wouldn’t hold it up next to the likes of the mju-ii in terms of lens quality, I often ask myself questions about how important that final ounce of lens quality actually is…?

And then of course, what makes a camera like this all the more facilitating is that if your interested in shooting in lower light – as you’ll read in even more depth in my my Olympus AF-10 review – these cameras make a perfectly viable option. In fact there is very little between the Olympus and Canon, they even both have active focusing which is arguably better for lower light shooting than some much more expensive passive AF cameras would be.

Really though, the best thing about these camera is that they can both be picked up for next to no money off eBay. They were never designed to be high end, high quality cameras, so the likelihood is, they will never demand good money on the second hand market. Yet in terms of there usability in a wide range of shooting circumstances – because of how crap they are – they can actually make a better choice than some significant more expensive cameras.

This is why – just like the AF-10 – the Canon Sprint is perfectly representative of the joy I get from shooting a point & shoot camera!

If you want to have a go with this camera get over to Bad Beagle and get in touch with Michael.