So far this year, I have had significantly more film photography related fails than I have had good experiences. I’ve had overlapping exposures and at least a few issues with poorly exposing film. This time the issue was the product of shooting a new-to-me-lens on a new-to-me-camera whilst away for a couple of days on holiday just after lockdown. Annoying, but I have a digital fix!

I feel like I should know better. In fact, I do know better. I shot some film at a wedding not long ago, and because I wanted to use a camera and lens I hadn’t shot before, I shot a test roll cycling through shutter speeds and apertures to make sure they all worked as they should. Going on holiday, I didn’t think to do the same. In fact, I rarely shoot a test roll – daft considering I have a strong interest in avoiding potential problems or even subjectively positive serendipitous impacts on my photos. Instead, just like I usually do, I trusted my judgement when inspecting both camera and lenses without shooting a roll. Unfortunately, I was caught out by two issues that were entirely undetectable without film testing.

The camera and lens in question were a Contax Aria and a Zeiss 85mm f/1.4 – so we’re no talking cheap gear here either. Add to that the fact that I bought the camera from a trustworthy retailer and the lens from a mate, and I was pretty confident I was onto a winner. What could go wrong?

Well, as it turns out, the Aria has a dicky shutter. It’s ok for the most part, but at its highest speeds – maybe 1/2000th and 4000th – I get underexposure or a partially blacked out frames. I’ve spoken to a couple of repairers now, and it seems the shutter unit isn’t repairable either meaning it needs a spare part shutter – not easy to come by in 2021. In short, unless I can find another broken Aria with a different issue, I can’t shoot it with any confidence above 1/1000th. Annoying – but I suppose part of the risk of buying such electronically reliant film cameras these days. The lens is even more frustrating too – not to mention a little confusing. Since I’ve discovered the issue I’ve sent some photos to the chap I bought it off to see if he recognised it as something he’d seen any hint of in his photos. By return he sent me a load of images that didn’t have the issue and that he’d taken not long before sending it to me. What’s all the more frustrating is that I’ve been on a bit of a short tele-lens kick recently, so whilst on holiday I took a lot of the photos with the 85mm lens. And that’s not to mention the fact that the issue only happens when the lens is shot stopped down, and being as I was on holiday taking photos on beaches and on walks on hills in the sunshine, I shot almost everything at f/8.

The issue presents itself as a large blob of low contrast middle. The more stopped down, the smaller and more distinct it gets. Wide open it disappears entirely. At f/8 it’s big enough to take up quite a bit of the frame and distinct enough to be hard to get rid of. What makes this confusing is there is very little sign of anything issue in the lens that could be causing this. There’s no haze at all, and I can’t see any sign of paint on the internal surfaces failing. So yeah, it’s now a mystery for Chris at Skylanney to solve for me at some point. Anyway… in the end, I whittled the photos down to the few I took with either the 50 or 28mm lenses, ones the blob was less of an issue on and I was able to remove with some local dehaze in Lightroom, and a couple that I couldn’t fix perfectly, but I wanted to keep the image anyway. I’m sure if they were vitally important, I could do a slightly better job, but as it is, I’m happy enough with the outcome in the end – which is I guess all that matters in the end, right…? You can still see it a bit on this shot of Murphy, but I don’t have a nice photo of him on the beach, so don’t mind the slight issue I suppose you might think the tedious Lightroom fix of the few images I wanted to save here is the “digital fix” I mentioned at the top? I actually think I could – were I to feel inclined – use this as an opportunity to make some smug argument for the benefits of having a digital aspect to film photography processes. Afterall, this issue would be even more difficult to fix outside of software.

I can’t be bothered with all that though. In honesty, as I have talked about recently, I don’t shoot film with any anticipation that anything like this is going to go wrong anyway. And I certainly didn’t feel smug about my hybrid workflow choices when slaving over Lightroom trying to save a couple of these photos from looking totally crap. Quite the opposite, I just felt annoyed at myself for not testing the camera and lens first. I also just regretted shooting film. I had, in fact, originally intended to take a digital camera, but talked myself into a film camera knowing I was likely to go to the beach with it – I like shooting film cameras on the beach, and always get a couple of shots I really like, the one of Connie above and this one below being case in point. 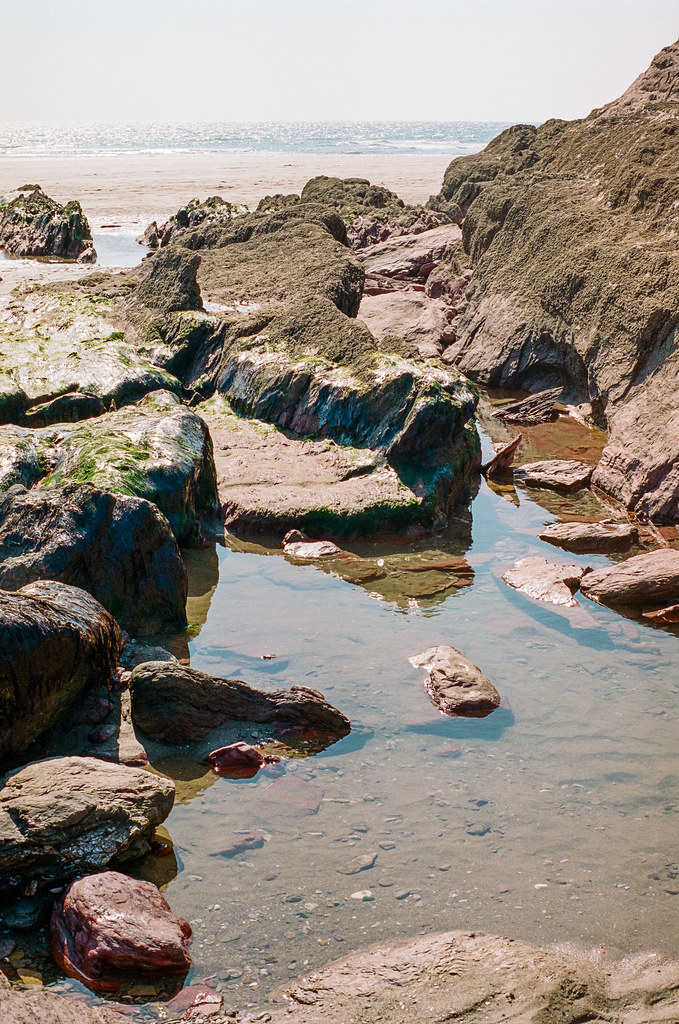 But, I’m not going to the beach for a little while again now… Which leads me neatly to my actual “digital fix”. For the time being at least, I’m not just going to use digital software to fix any of my film photos that might go wrong in the way these did. Instead, I’m just going to shoot more digital. Me and film photography haven’t fallen out for good, but after all the balls-ups this year so far, I’m going to lean on digital as my first choice for a bit. I’ve been enjoying my little Sony NEX-5R, as well as getting a lot more out of shooting the Sony A7iii I retired from work a few months ago – so why not commit to the digital cause a bit more…?

Afterall I suppose, this has to be the benefit of being both a film and digital photographer. When digital get mundane (as it tends to for me eventually), I can shoot film. And when film makes me want to scoop all my film cameras into a skip and set the lot of them on fire (as I currently feel), I can take a break and shoot digital for a bit. The Contrarian with the Contax – By Frank H. Wu